Here’s what I did in Argentina + Chile for a month, day by day!

I bought my ticket to Argentina back in January 2016 so I had many months to dream about my trip and fantasise about what to do there. A month in Argentina sounded like a long time at first but I soon realised it’s barely enough to scratch the surface of what the country has to offer. As a result, I had to “run” quite a lot for the whole month, but it was definitely worth it and I would do it all over again and again!

Before I write individual posts about every single experience here is a recap of what I actually did, since I ended up leaving to Argentina with just a few fixed plans and many confused ideas about what to see and do, without really knowing how to. This is partly because I am not a fan of planning too much, but mainly because if you want to remotely plan a trip across Argentina by bus there are just too many operators, different timetables, nobody answers e-mails etc, so I just thought I was going to figure everything out once in Argentina. Which, luckily, happened – and very successfully so – as I managed to do everything I had in mind. Yay me!

So here we go.

Buenos Aires. I was very lucky because I stayed at a friend’s place and he showed me around the city and its main landmarks: the Ateneo Library, Cementerio de la Recoleta, Plaza de Mayo, Palermo, La Boca etc, and of course we even went to a tango show.

Another thing that I did in Buenos Aires was meeting the Argentinian side of my family. I didn’t have a lot of time to visit the capital of Argentina, but I feel like I did a lot! 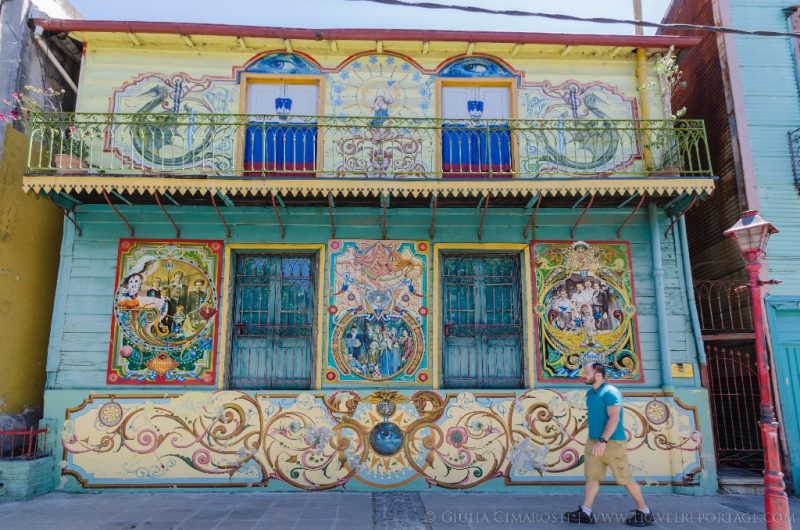 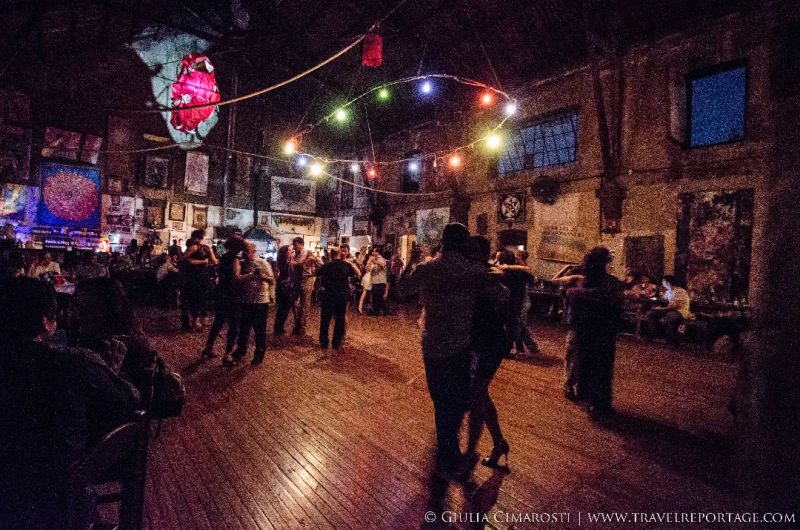 Iguazu. I flew from Buenos Aires to Iguazu and had the whole afternoon to visit the Iguazu Falls (one of the Natural Wonders of the World) on the Brazilian side. On the following day I visited the Argentinian side which requires a full day (or even two). 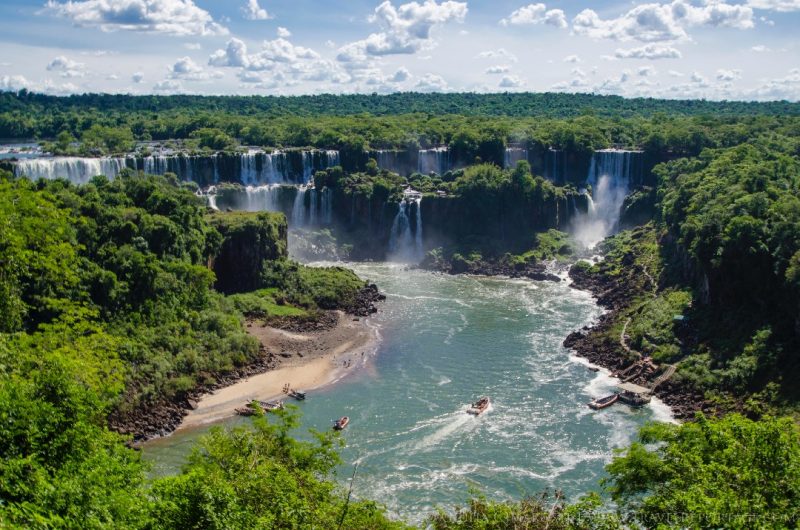 The Iguazu Falls as seen from the Brazilian side 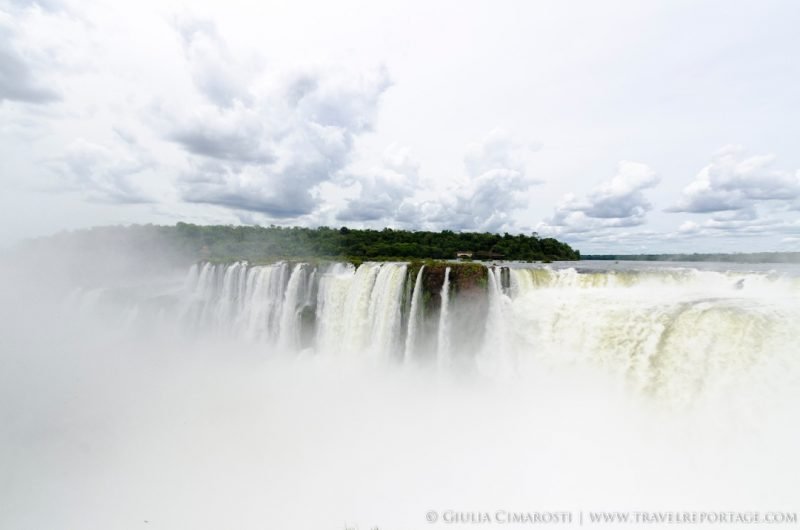 The Iguazu Falls as seen from the Argentinian side

Salta and Jujuy (the north). I landed in Salta on the 16th and climbed the Cerro San Bernardo for a beautiful view of the city. On the following day I rode the worldwide famous Tren a Las Nubes all the way up to 4.200 meters of altitude.

What wasn’t planned and turned out to be one of the best things that happened on the entire trip was meeting some other solo travellers, renting a car together and taking a 4-days road trip to the Jujuy Province (further north) across incredible landscapes. This part of the trip marked my personal record in terms of altitude more than once, starting with the 3.600 meters of altitude of the Salinas Grandes, up to the 4.350 meters of altitude of the mirador to the Hornocal (Mountain of the 12 Colours). 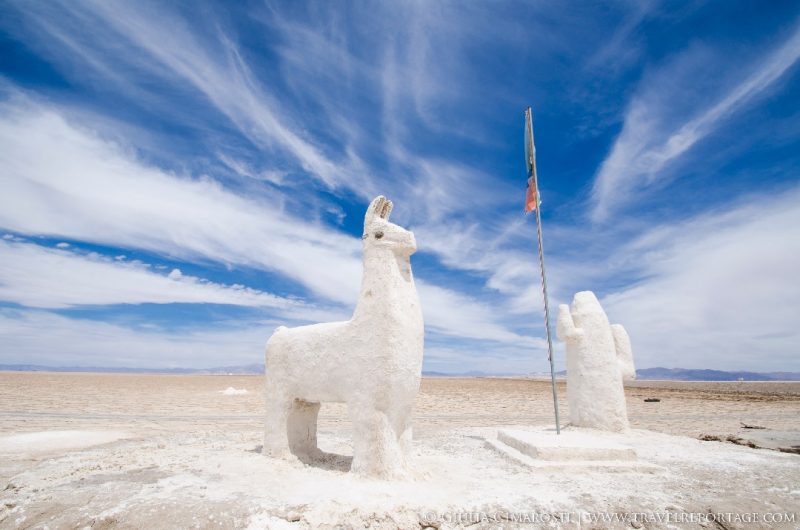 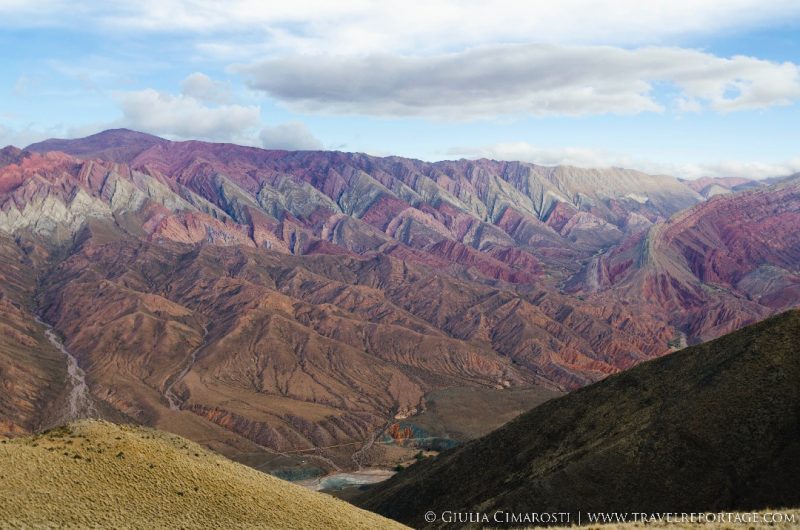 The Hornocal, or “Cerro de 14 colores”

Peninsula Valdés and Punta Tombo. Peninsula Valdés was one of the main reasons I wanted to visit Argentina in first place. Although I got to see whales, penguins, sea lions, ostriches and other animals, I now know that a 1-day excursion to the Peninsula is not barely enough to appreciate the beauty of this place. Next time I want to spend more time here!

Punta Tombo was a beautiful surprise, with thousands of penguins walking around in a much more colourful landscape than I expected. The icing on the cake was the boat excursion to see the Commerson’s dolphins, a kind of dolphin that can only be found in this area of the world. 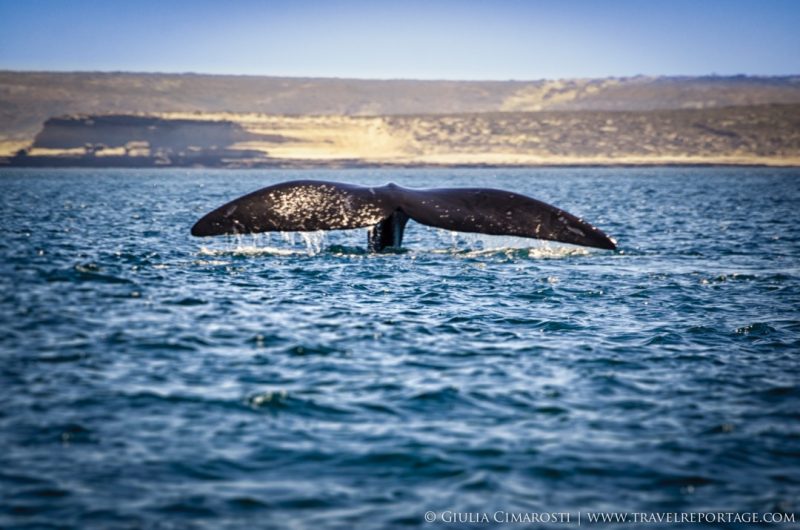 My first whale in front of Puerto Piramides, Valdés Peninsula 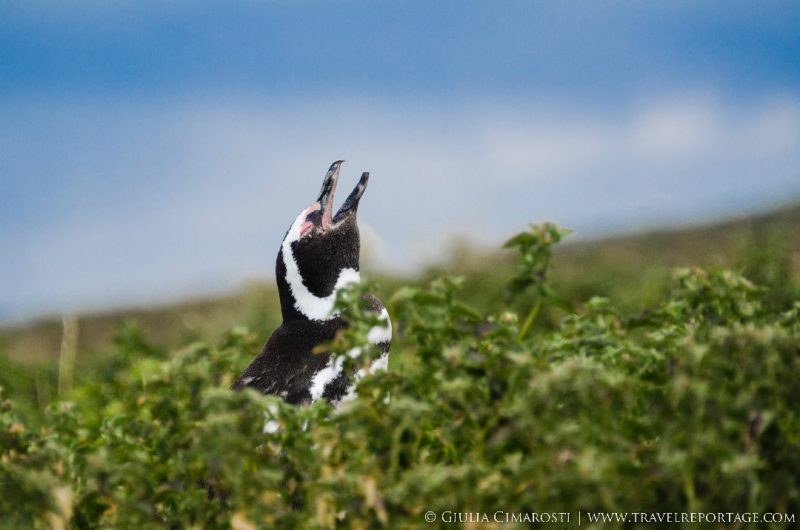 A penguin in Punta Tombo 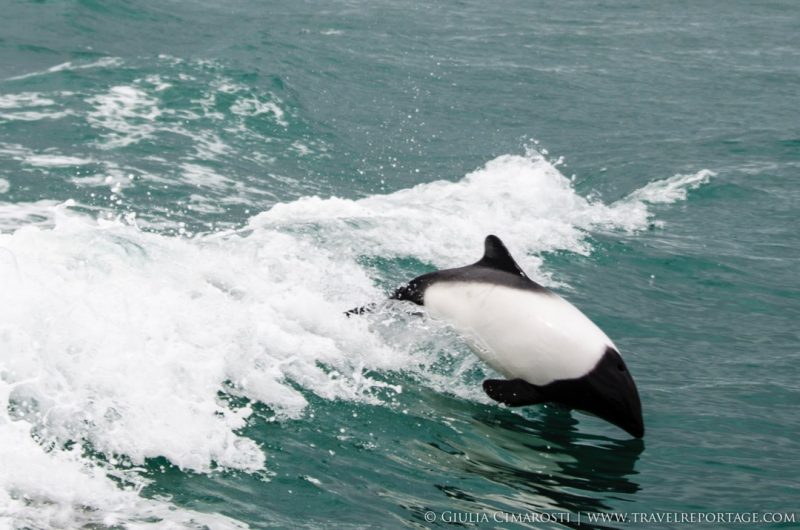 Rio Gallegos. There was no particular reason for me to spend the night in Rio Gallegos, other than the fact that I had to. I took a night bus from Puerto Madryn (near Peninsula Valdés) on November 24th and my destination was El Calafate, but I had to stop in Rio Gallegos for the night after 18 hours on a bus, and proceed on the following morning for 5 more hours. 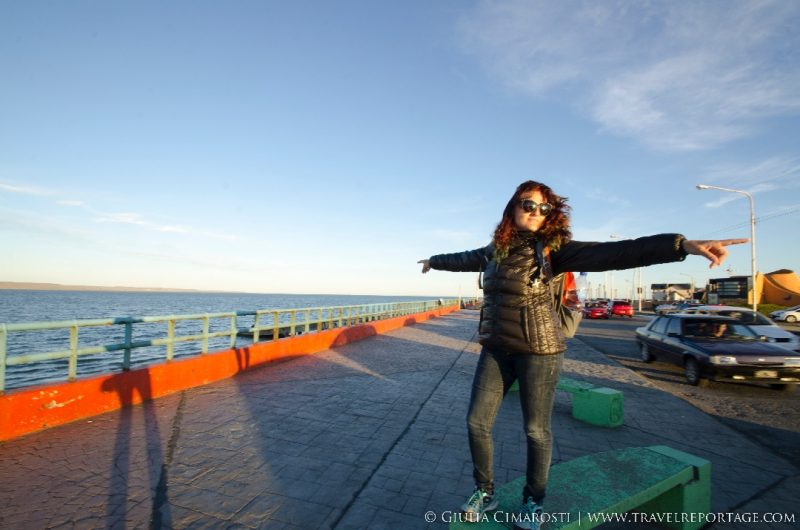 There is really not much to do in Rio Gallegos except feeling like you’re back in the 90’s.

El Calafate. As soon as I arrived to El Calafate I reserved my excursion to the unmissable Perito Moreno Glacier for the following day and a bus to El Chaltén after the day trip. Yes, I was rushing a lot but this way I saved on accommodation (super expensive in Patagonia) and managed to see everything I wanted to see!

On the same day of arrival I visited the Laguna Nimez Reserve with its beautiful views of the mountains and pink flamingos at sunset. Not bad! 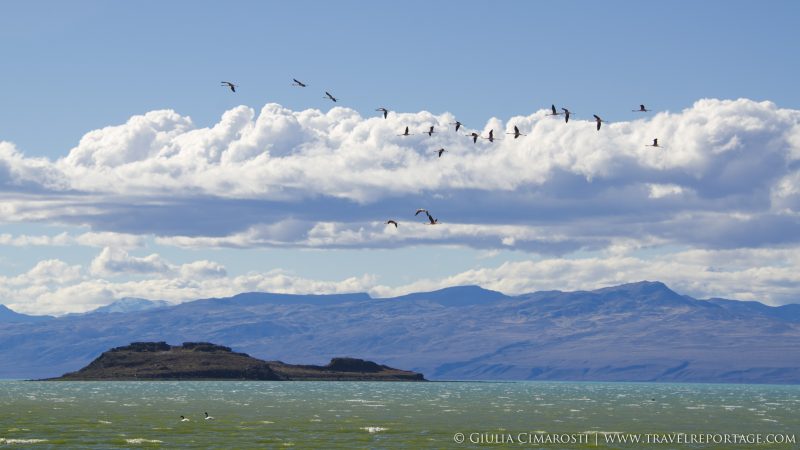 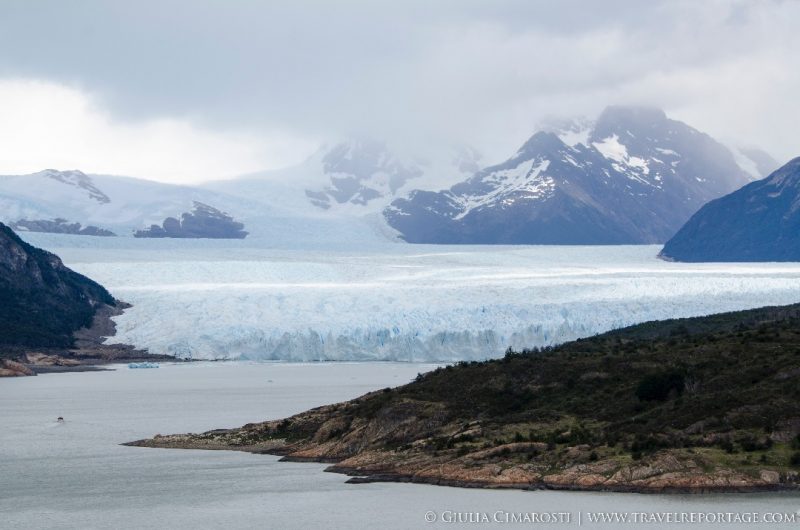 El Chaltén. I planned to hike both the “Fitz Roy” (also called “Laguna del Los Tres”) and the “Laguna Torre” trails but only managed to hike the first one because of the bad weather conditions on the second day. The Fitz Roy hike was one of the best things that happened to me on the entire trip!

Mount Fitz Roy at the end of the hike. Spot the people to get a sense of scale… 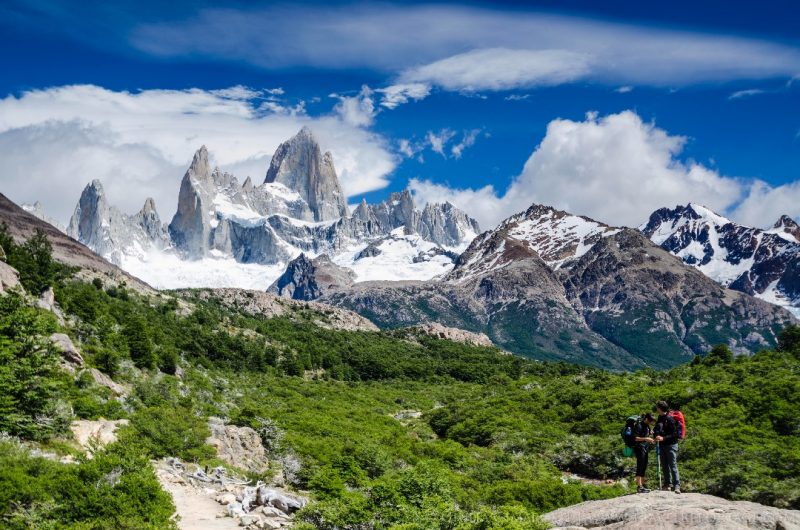 El Calafate. Again! But just for a few hours because my bus to Puerto Natales, Chile was at 5am. 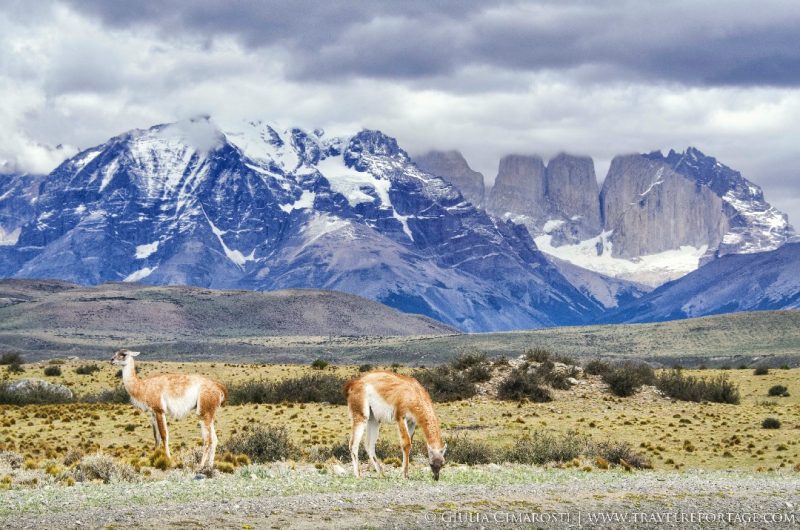 Guanacos and the Torres on the background

Punta Arenas. This was another place that I wasn’t originally planning to visit but had to because of bus schedules. I had to reach Ushuaia and direct buses were not available on the day I needed so I spent 1 night in Punta Arenas, the southernmost city of Chile, right on the Strait of Magellan. I honestly loved this place even if I had just one afternoon to spend there and my bus to Ushuaia was very early on the following day. 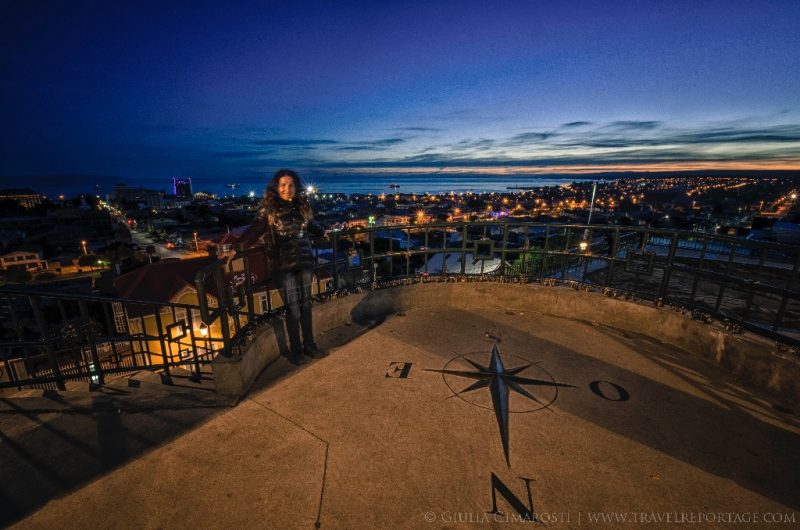 Me in Punta Arenas by night

Ushuaia, Tierra del Fuego. With a 12-hours bus ride from Punta Arenas I finally made it to Ushuaia, the “finishing line” of my trip. I spent 3 nights there, enough for a boat trip on the Beagle Channel, a day trip to the Tierra del Fuego National Park, and a free day in Ushuaia where I planned to hike to the Martial Glacier but couldn’t because of bad weather. So I went to the “Museo Maritimo e del Presidio” before flying to Buenos Aires to catch my flight back to Italy. 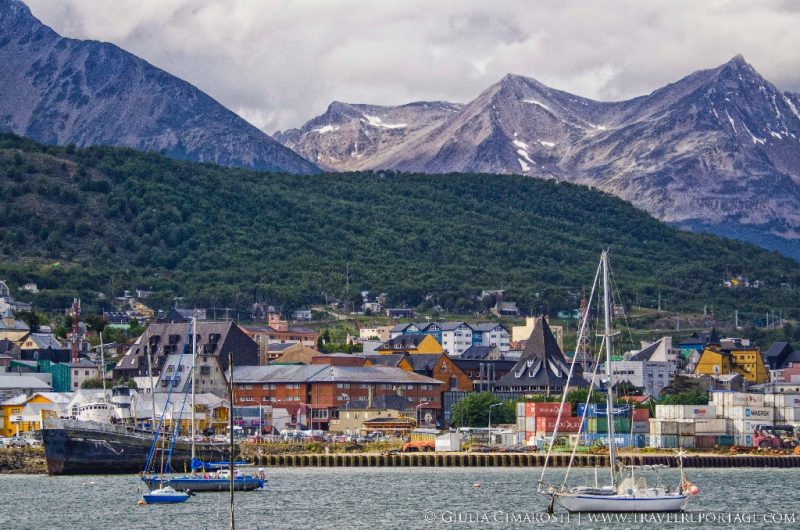 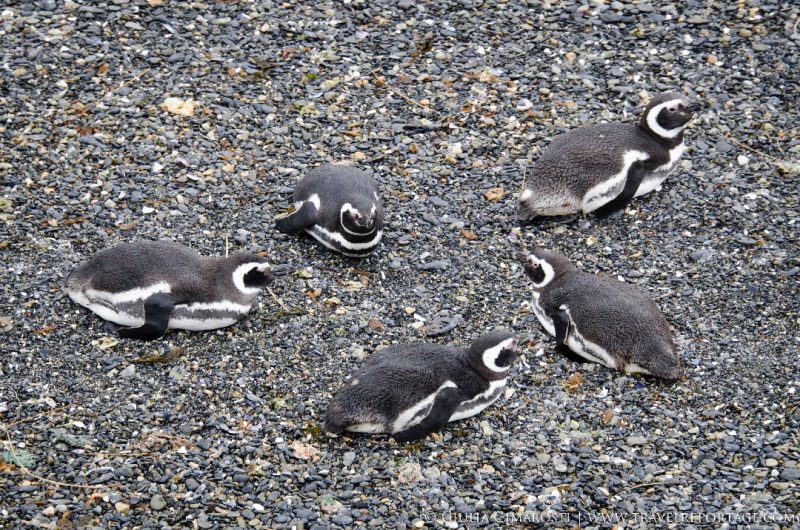 Penguins on the Beagle Channel 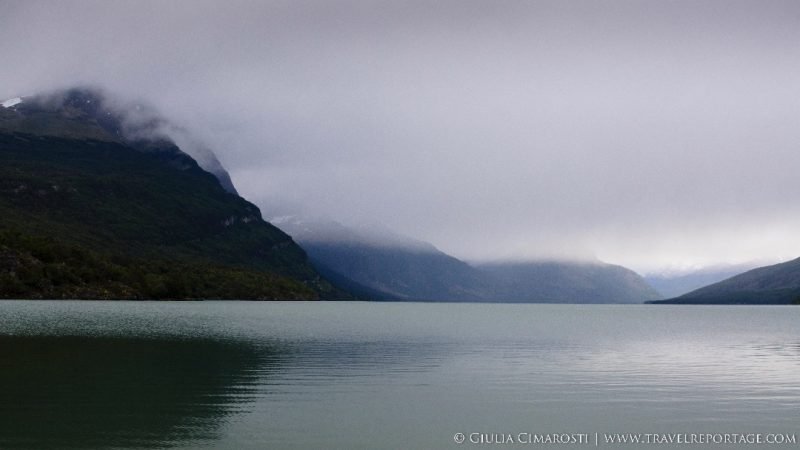 Buenos Aires. I flew back to Buenos Aires for my last day in Argentina. Here, I got to meet more members of my Argentinian family and we went to another tango show. On December 10th I sadly flew back to Italy.

As you can see on the first part of my trip I moved around the country with internal flights. Starting from Peninsula Valdés though, I only wanted to move by bus in order to really appreciate the distances of Patagonia. When planning a trip to Argentina don’t forget to allow enough extra time for transportation!

Next post will be about the hostels where I slept both in Argentina and Chilean Patagonia: the good, the bad and the ugly! Is there anything in particular you want me to write about? 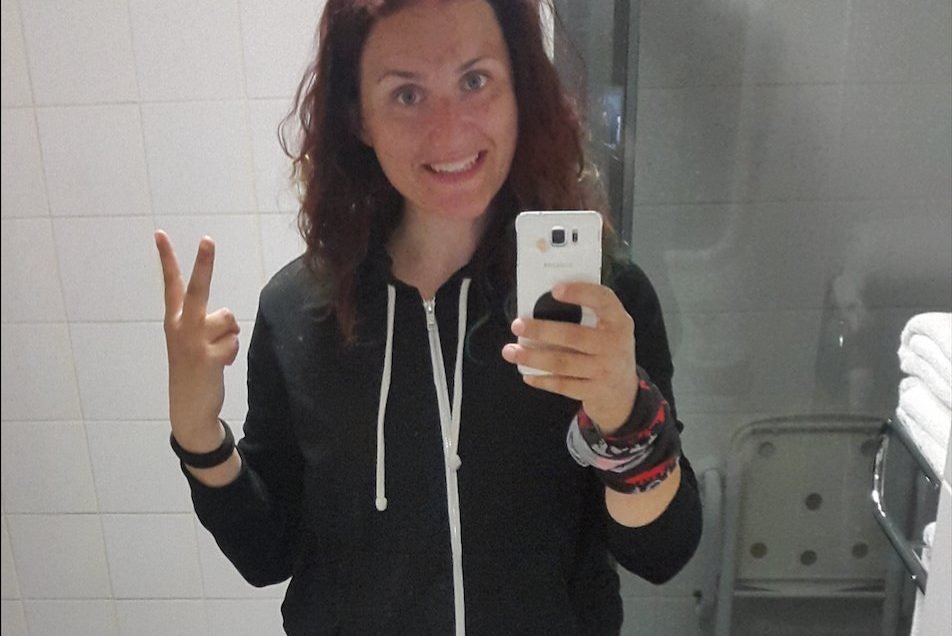 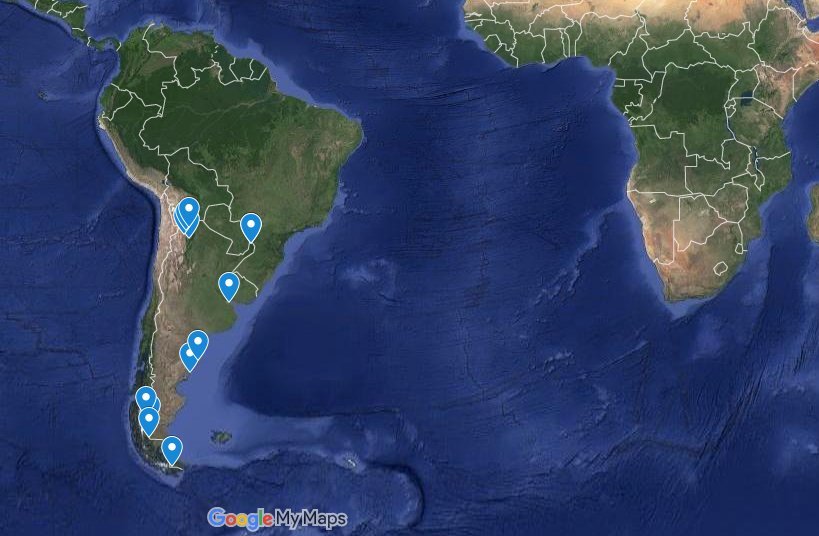 Argentina in a month: my itinerary! #ArgentinaTR
8 Nov ’16

argentina is best country for travel and it have own place in games..Thanks for share

Iguazu Falls looks like a dream! I’ve wanted to go there for a long, long time. I’m a little obsessed with waterfalls.

Argentina is one of beautiful country for traveling. I was going 2 years ago on my business trip but I do not visit any places in there. But now I want to visit this some places can you give me some guideline about this place this information is valuable for me.

These two are the great countries, And there are so many places to explore over there. so one can check out so many things over there. And the way you give us this itinerary is great way to explore these cities. Love your pictures, they just amazing.

Your blog posts are remarkable