My top 5 Canadian food experiences, from fun to hilarious

Canadian food. I had no idea what to expect and not being a foodie I wasn’t too interested either, but on my recent trip to Canada I made some interesting discoveries and most of all I had a lot of fun with them!

Disclaimer: this post is intended to be funny and is by no means a serious review of food! I have no idea what I am talking about ok? Ok. 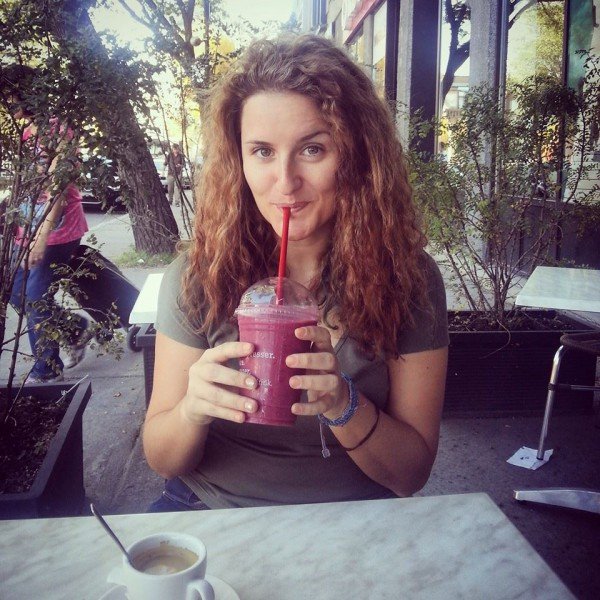 Me drinking a smoothie in Montreal and I didn’t like it.

So here are my top 5 Canadian food experiences, from fun to hilarious:

AKA my precious. During my stay in Roatan I remember people from the US making fun of Canadians because they supposedly pt maple syrup on top of everything. I don’t know if that’s true, but I can say all the foods with maple syrup I tried were delicious. Just a coincidence? I doubt. 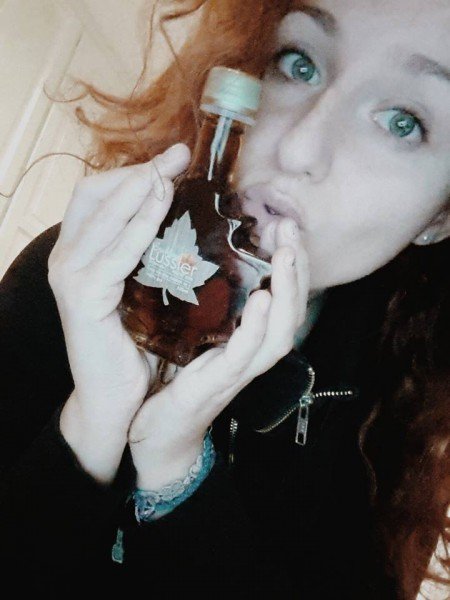 Me and the Maple Syrup I bought in Québec. My precious!

Of course! This was on top of my list of things to try in Canada. I had it twice and then decided I am not a fan. The first time was in Calgary and in order to make it a real Canadian experience I dressed up as a lumberjack then ordered the plain version of poutine.

After I had the whole portion I thought I was going to roll home instead of walk. But I somehow managed to stay awake and reach the car… (read: I found it too heavy for my taste!) 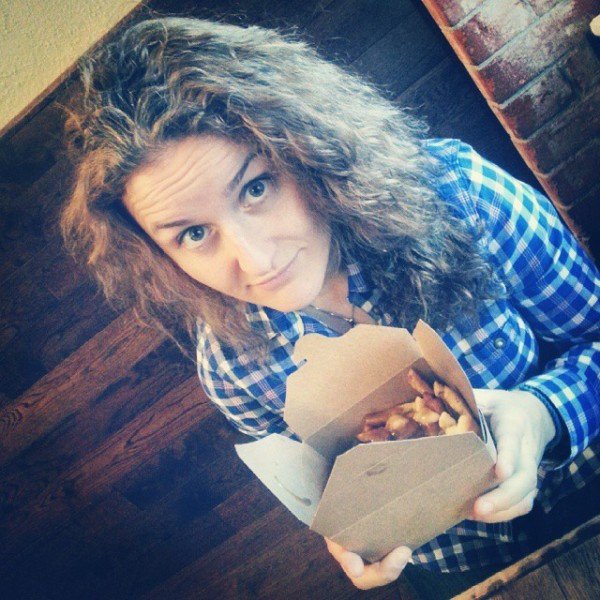 Lumberjack me and my first poutine in Calgary

But since I know what you are thinking – the best poutine is in Québec right? – I promised myself I would give it another try once in Montréal, and so I did.

Apparently the best place to eat poutine in Montréal is a restaurant called La Banquise, which is open 24 hours and still has a line of people waiting in front of it at all times. This time I went for something a bit different and ordered the guacamole poutine. I liked it. Still too heavy. I can live without. But I understand that this was a must and I couldn’t miss it! 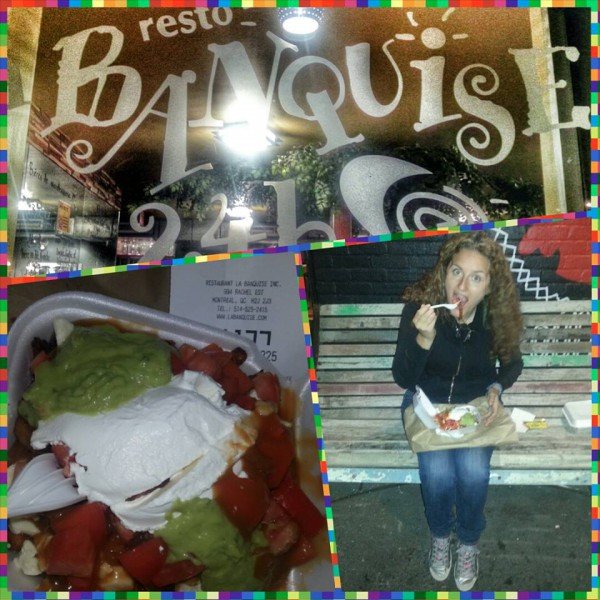 “What the hell?” Is what I thought when I first heard of “beaver tails”. I honestly thought people ate the actual tails of beavers and I thought it was disgusting – as you all know I am a vegetarian, plus I never saw a beaver before and I didn’t want to see a dead one as a start!

But then I realized I was wrong and beaver tails are basically just fried flat, sugary pastries or something like that. And you can put anything on top of them. Sweet! I had to try one! This happened in Mont Tremblant, Québec. 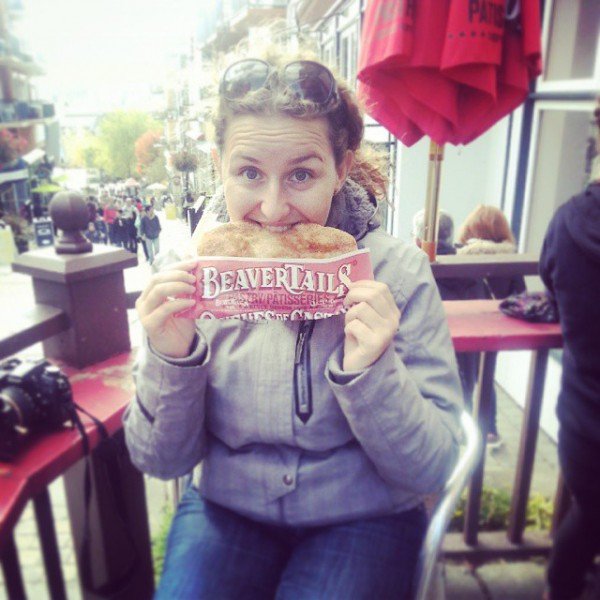 Me and my first (and only, so far) beaver tail

Ok, technically this goes into the “Maple Syrup” section but it deserves a paragraph of its own, because it’s awesome!

A Maple Taffy is something super Canadian – basically you pour warm maple syrup in snow so that it hardens up a bit (this is the coolest part) and then you roll it on a stick to make a lollipop. Since there was no snow when I visited, I had to try the touristy version which is made in “fake snow” but I still think it’s a lot of fun! And it’s sooo sweet! And chewy! OMG. GIMME!

And don’t miss the video of me rolling up my first Maple Taffy. 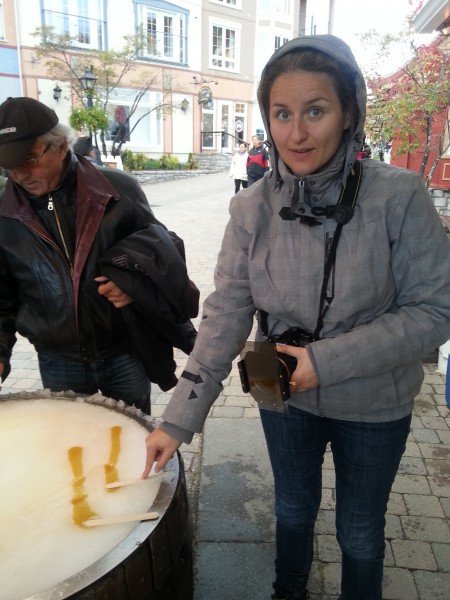 Of course! Last but not least! Everybody seems to hate it but for some reason there are almost 5,000 Tim Hortons cafes in Canada. It’s like in Italy when nobody votes for Berlusconi (“me? nooo”) at elections but for some reason he’s still there. Makes sense?

And so yeah it probably sucks (the coffee I tried sucked big time, but then again, I’m Italian so I can be picky on coffee) but still, it’s another Canadian must! Plus it comes with wifi so it doesn’t really suck, hey. And anyway you’ll bump into one at some point, there’s no doubt about it.

Canadian food, eh? What would you add to the list?

If you get a chance try a nanaimo bar!

Wait a second, what is that? ;D

Poutine is SOOOOOOOO good! If you go to America and ask for poutine, they will give you a funny look, because it doesn’t exist there.

I don’t find Canadian food that great (I am Canadian). But poutine is the shizzle!

It was fun to try different kinds of poutine :D