The Canadian Rockies by bus: epic landscapes, rainbows and unicorns

When I planned my trip to Canada I initially only thought I was going to Quebec. Then I added Calgary to the itinerary. Then Vancouver. By then I knew I was going to be very close to the super famous Canadian Rockies and I didn’t have enough time – nor money – to explore them.

So I had the smartest idea EVER: riding a bus from Vancouver to Calgary.

This way, I thought, I could still get to see something and get an idea of how these mountains look like, and buying the ticket online I only paid 49CAD for this 18 hours bus ride. Sounds like a great deal to me! 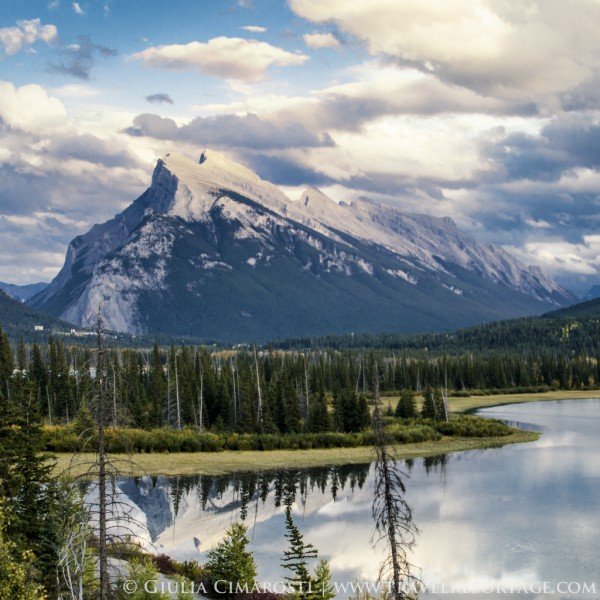 The Banff National Park on the road

There are a couple of different trains available too, but much more expensive and requiring more time, so I didn’t have much choice. Turns out this trip was much more than just a transfer from A to B. It allowed me to see so much more than I thought, and for so cheap!

If you plan to do the same, just go on the Greyhound website (here) and you can pick many different routes and times. The bus I went for left Vancouver BC around midnight, and reached Calgary around 7pm on the following day. I thought this was the best option so I could sleep at the beginning of the trip, and then see the landscapes in the daytime. I am so happy I picked that bus because it was perfect.

Before the pics, here are two very important tips for you:

And now, to the photos. I took all of the following photos from the bus window. You will see some reflections and some camera shake, but I hope you also see the beauty. Just try and imagine: I woke up and found myself in the middle of one of those landscapes I dreamed about for so long before visiting Canada – the sunrise over a lake in Kelowna, with beautiful reflections of the clouds and a red sky… and I thought WOW! I AM HERE! 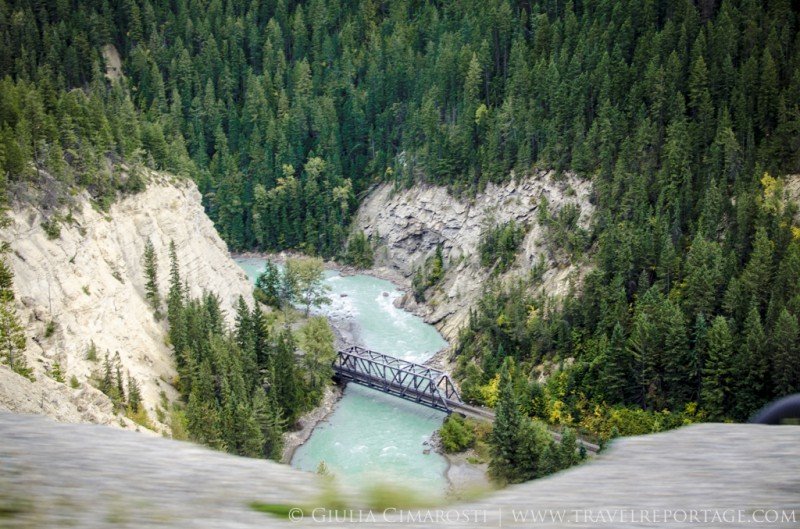 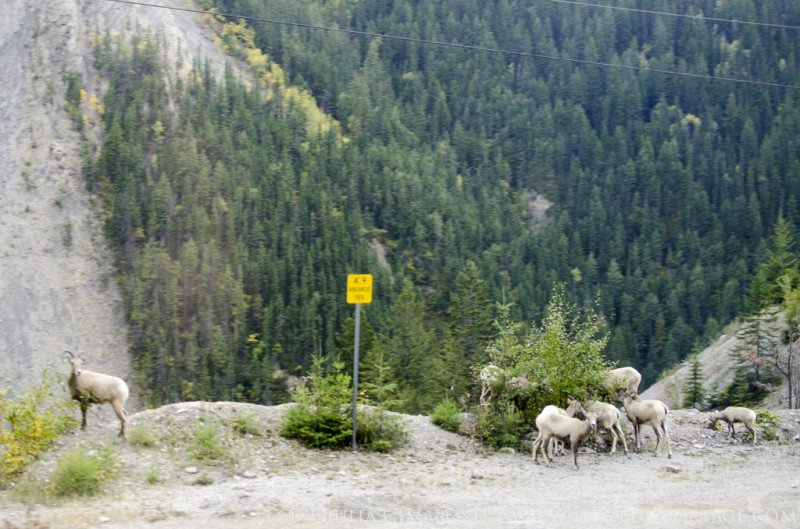 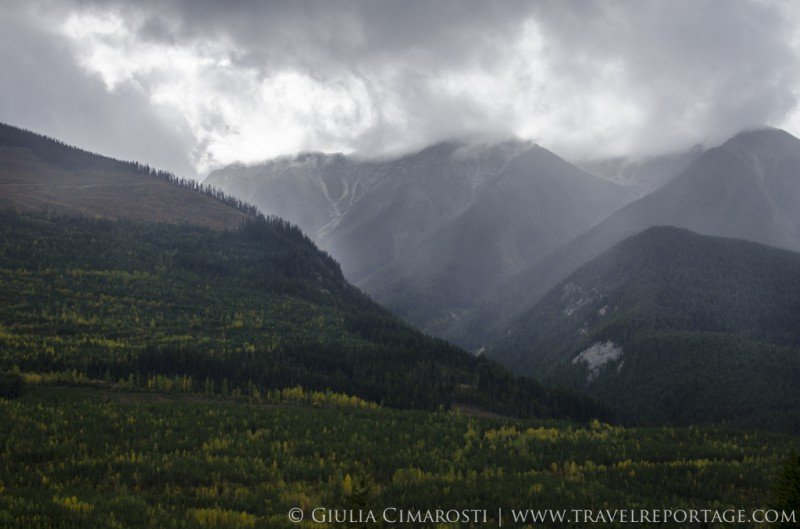 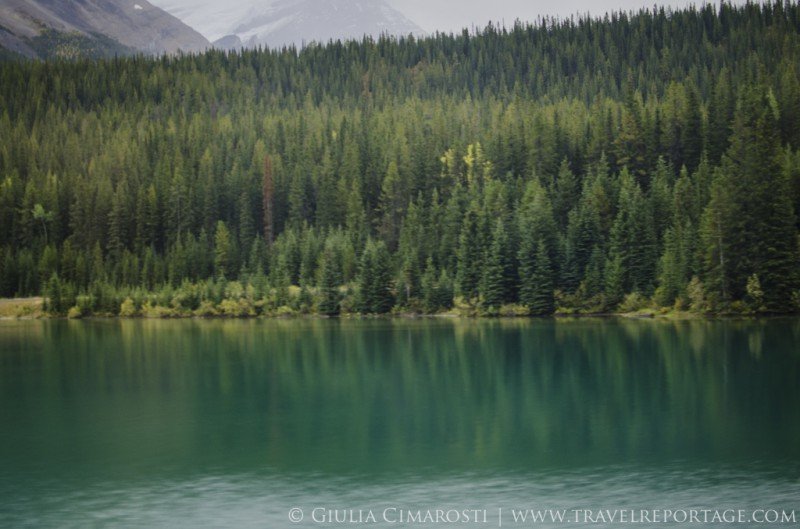 There’s no lack of reflections. 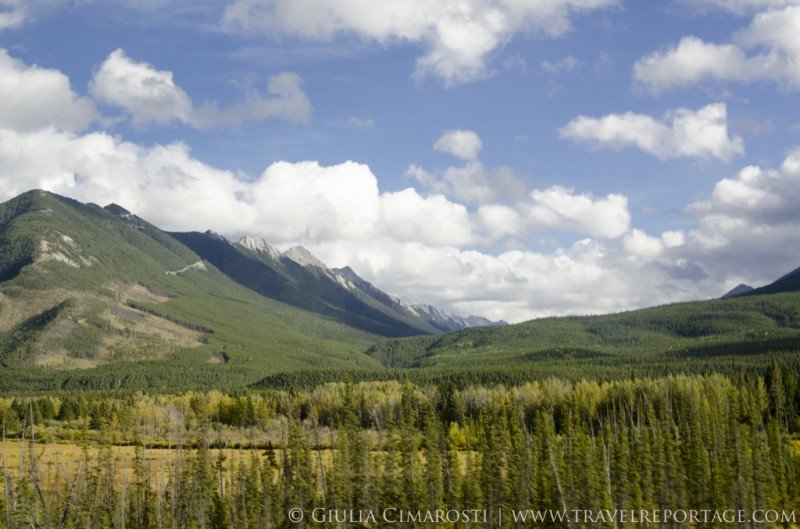 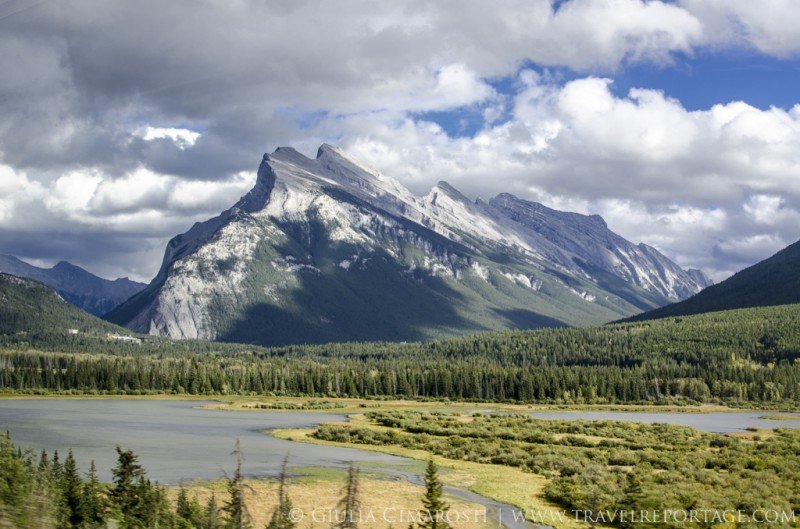 …but it’s not! It’s the Banff National Park. 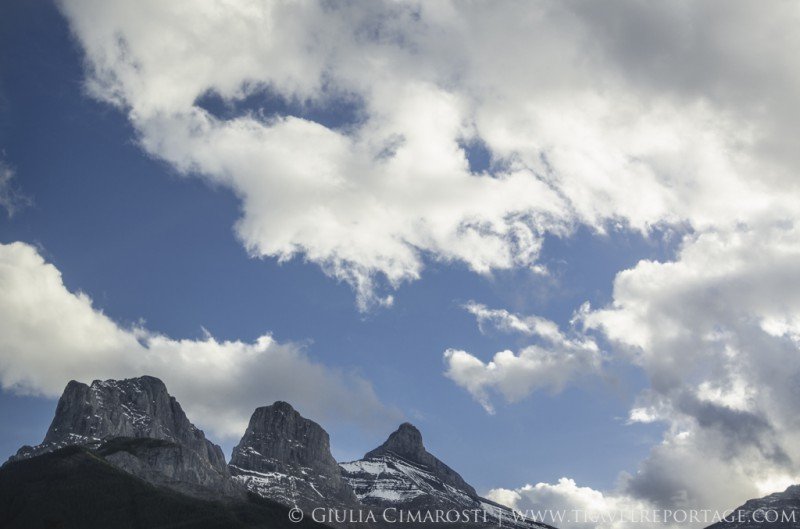 Now for the rainbows and unicorns – we were literally surrounded by them! 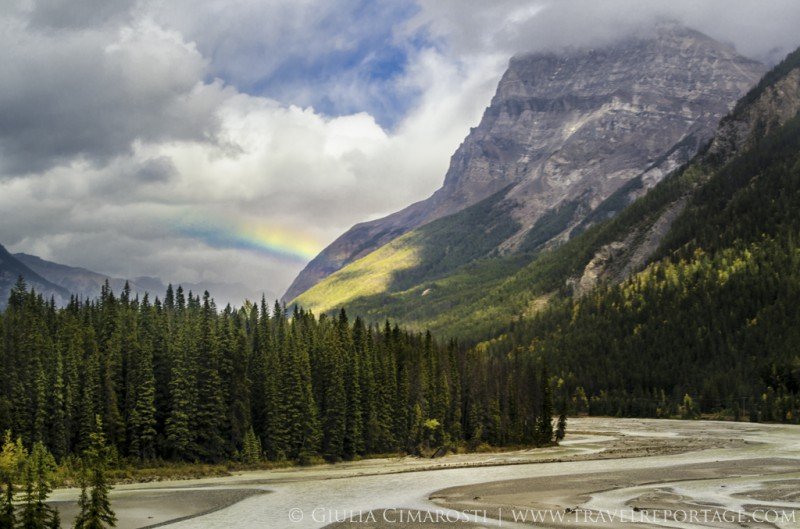 A rainbow in the Rocky Mountains 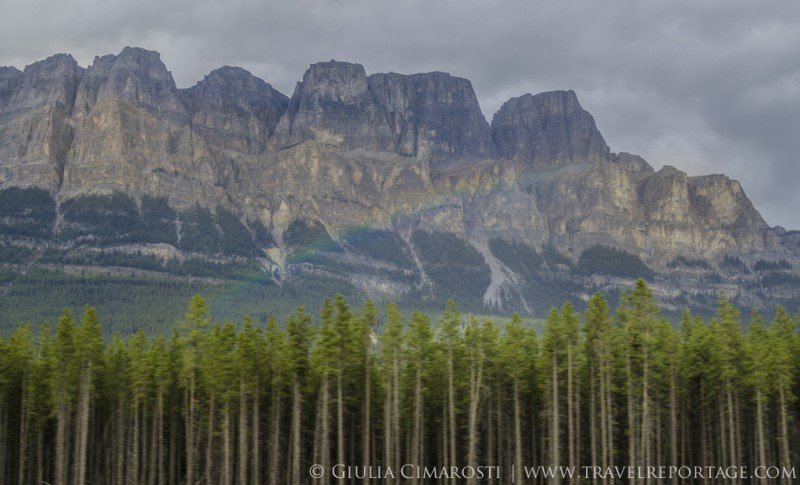 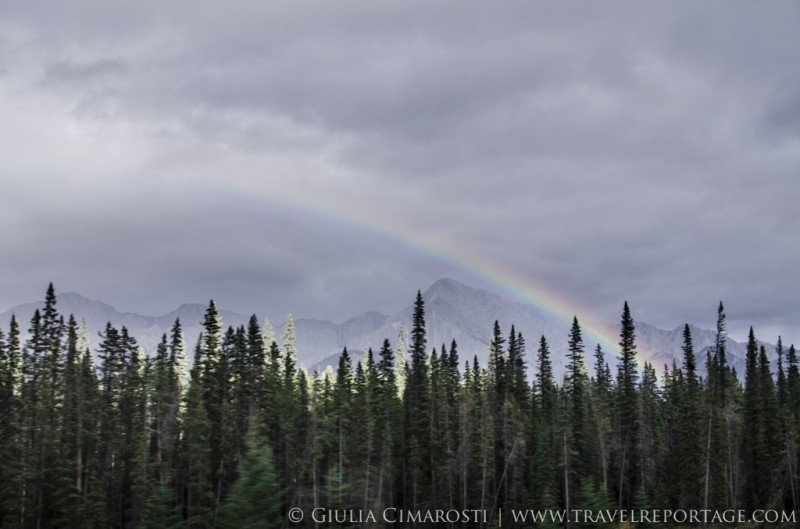 Yet another one. Wow

You probably can’t see the unicorns but I SWEAR they were there. They just don’t show in the photos because they’re magic. But you should go to the Canadian Rockies and see them for yourself…

Another thing I loved about this trip is passing through all the legendary places I only heard about before: 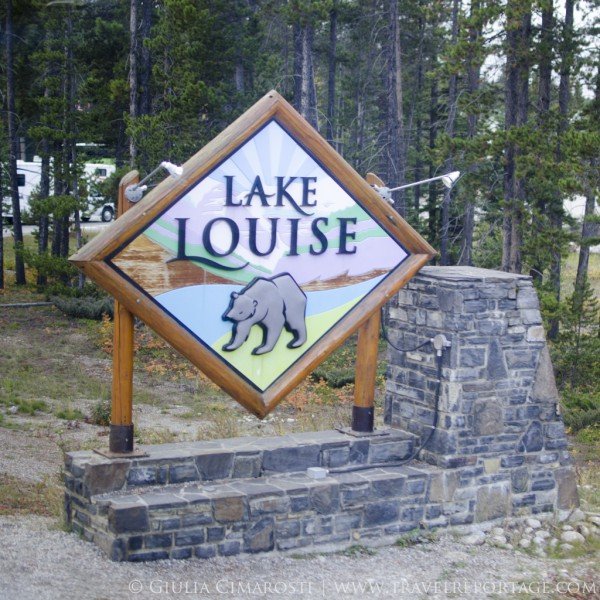 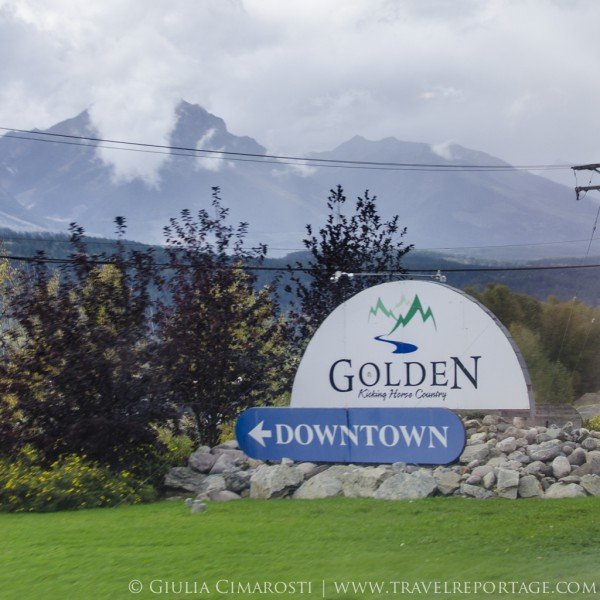 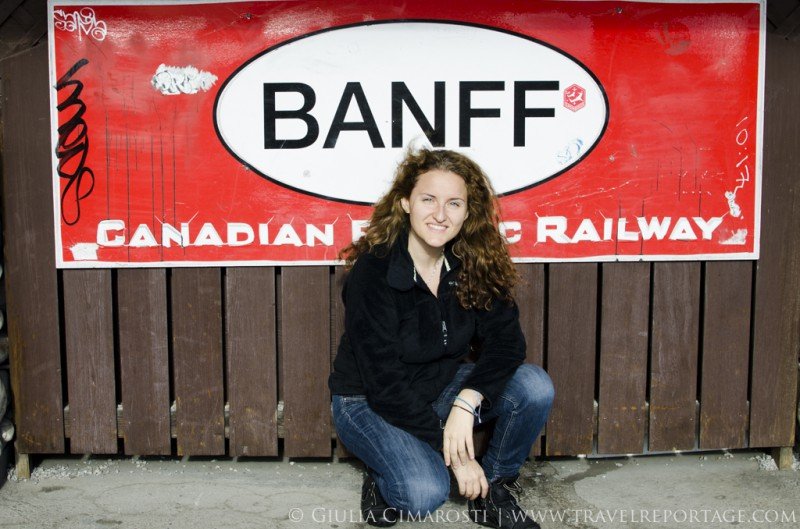 Me in Banff at the bus stop (and train station)

I love riding buses. It allows you to see so much. This was definitely my favorite bus ride ever.

By the way, if you plan to get to Calgary, Alberta and stay there for a while, that’s a great base to explore the Banff National Park on your own if you have a car. I did so and got to see more of the lakes etc – with the bus ride only I was missing out a lot, that’s for sure. But it was great nevertheless, also because on the bus itself I met some really cool Canadian characters and that made my trip even more memorable.

I would also like to point out that this post was NOT sponsored in any way by Greyhound. I just really loved this trip and I recommend it to everyone! 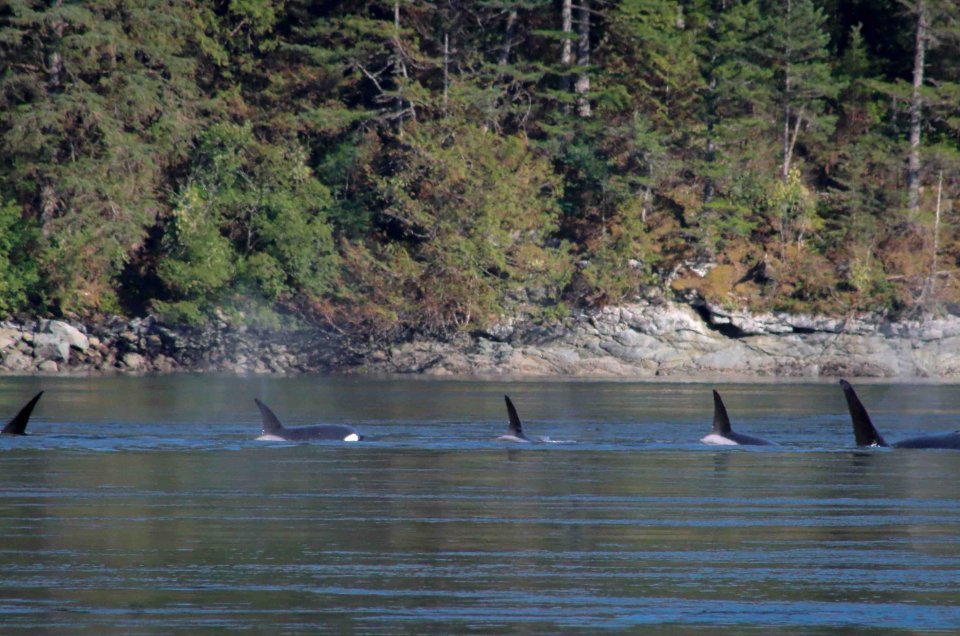 Kayaking the Inside Passage, BC to Alaska… For Fun’s Sake!
7 Nov ’19

It’s true :D just make sure you book in advance and online. Go for it!

I’m pretty damn impressed with these photos – from a moving bus! Bummed not to see any REAL unicorns however.

Thanks Jim! Yeah well, I also took many BAD photos but they still make great memories. Obviously being there was a completely different experience. I loved it and would do it all over again.
The photos of unicorns were also very good and were the ULTIMATE PROOF of their existence! But they don’t come out in the raw files. It’s magic.

What a col place. I can’t wait for my trip! I on’t think i will take such good photos as you but I’ll try :)

Hey Fabiana, well the important thing is to see the place, and I am sure you will love it. Feel free to share your pics! Ciao :)

these are some really stunning places! I’m more of the train person but overall I really enjoy land travel in the daytime as this way you can see so much more and usually these are places you wouldn’t have seen otehrwise!