It’s a rat, no it’s a cockroach! AKA The worst hotel night of my life

When I arrived to Morocco the other day, I wrote a short post about my first impressions (not great). Little did I know that the worst part still had to come – the “good night of sleep” that I was looking forward to quickly evolved in some sort of nightmare.

I am still not sure whether I want to share the name of the hotel or not, but first I’ll tell you what happened, then you can let me know what your opinion on the matter is.

***UPDATE*** – The name of the hotel is “Hotel Essaouira”, just off Djemaa El Fna Square. It’s cheap, and it’s on the Lonely Planet guide too, but don’t go there!!! 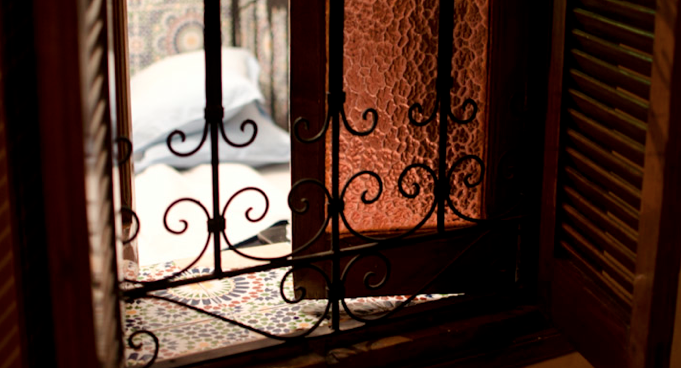 The horror room… looks lovely but has a surprise!

So shortly after I wrote my post, I went to bed. After about one hour, for some reason I woke up. I switched on the light and to my horror I found out my mattress had bed bugs! I saw one crawling away on my right and jumped out of bed. There was no doubt – my first encounter with those mythological creatures well known to backpackers was finally taking place! And I honestly could have done without…

I went to the reception desk and the guy gave me another room without looking too surprised. I moved to the other room but I was a bit panicky and didn’t trust that place at all anymore, so I asked the reception guy if he could please check whether the nicer (and much more expensive) riad of the same property, just in front, had a room for me. I was willing to pay a lot more just to be sure I didn’t have bed bugs. Instead, the guy got angry and told me “you can just pack your stuff and leave!”.  Which was not an option since it was late at night in the Medina of Marrakech, and I wouldn’t even know where to go anyway.

So I stayed. And surprises were not over yet.

I flipped the mattress, inspected it inch by inch, used the flashlight as well, found no trace of bed bugs. Good, even if I was still suspicious… But I was tired and I needed to sleep so I decided to sleep with clothes on and avoid the hotel covers – yes it was quite chilly! – and I switched off the light.

As soon as I switched off the light, I heard a squeaky sound that reminded me of a mouse, but I was so desperate that I thought “fine, the mouse is ok” and ignored it. Of course shortly after I had to go to the bathroom. I wish I didn’t, because as soon as I entered my room again I saw something HUGE crawling on the floor and hiding behind my suitcase, and I thought it was a mouse. Which was OK for me (can you imagine?). But then I moved the suitcase to see, and found it was a ginormous cockroach, the biggest I’ve ever seen in my whole life, and it was there in my room! I tried to let it go out but failed repeatedly. For some reason I never thought of killing it, but I am sure that wouldn’t be as easy as it sounds anyway.

Then I thought OK FINE, I will sleep with this guy in my room anyway. He won’t climb the bed and come next to me, right? So I will be fine. *switched off lights again*

Needless to say, that night I kept waking up every half an hour to check for bed bugs, and one of those times I saw a cockroach on the bed beside me.

I just couldn’t wait to get out of there… I didn’t even go to the bathroom in the morning. I was already wearing my clothes, so I checked out without even speaking to the guy (who didn’t talk to me either, never apologized or anything) and left, to find a much better place to stay shortly after. 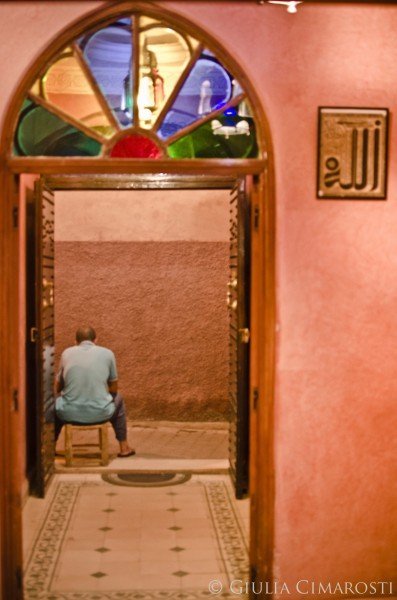 This is the reception guy. If you see him, tell him to ef off (and don’t sleep there!)

So this was my worst night at a hotel ever. Gross + upsetting… shall I share the name of this hotel? It’s even on the Lonely Planet guide!

***UPDATE*** – The name of the hotel is “Hotel Essaouira”, just off Djemaa El Fna Square. It’s cheap, and it’s on the Lonely Planet guide too, but don’t go there!!!

What was YOUR worst hotel night ever? I need to feel better about my experience… because I am not the only one, right? :) 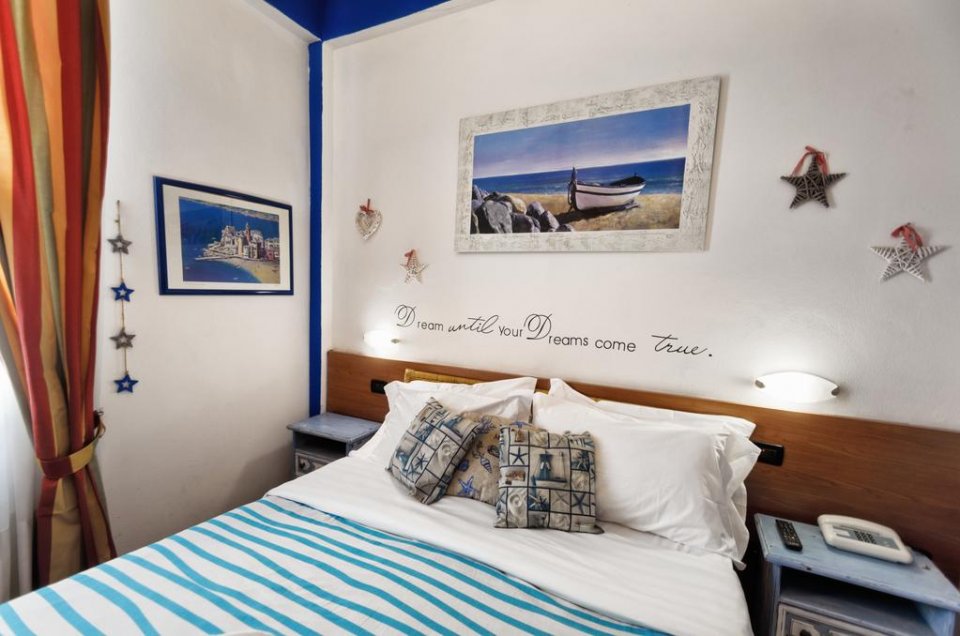 That sounds pretty gross Giulia. We had plenty of those encounters in India: rats, cockroachs and other gross friends. One day we woke to find not one, but 3 little mice in our room!! Plenty of uninvited company. I guess you need to look at the bright side and think that now you will have a fun (but gross) story to tell :)
Enjoy the rest of your stay in Morocco.

You are right, after all it’s a story to tell! Sorry about your encounters. I don’t think I could deal with 3 mice in the room… oooh boy.

I’m so sorry you had to have that experience!! Sometimes…. guidebook totally fools us over. I had the same experience in the Philippines.

Thanks for sharing your story… and sorry about that! I am paying much more attention to online reviews now. Hopefully I won’t be fooled by a guidebook again.

At the very least I’d be writing an EXTENSIVE TripAdvisor review. And if ever I’m headed for Marrakesh I’ll be emailing you for the name :-) Hope Morocco is improving for you :-)

I will write a review for sure… and will also share the name on the post. Decided! :)

I had 2 – 3 bad experiences, and even if not that bad, they were bad enough for me!

The first two were blood stain on a mattress and carpet in – surprise, surprise – Marrakech and that in a 4* Hotel! They changed the mattress, fixed thenonfunctioning plugs, but were also rude! Wasn’t surprised reading abt the rude guy!

The other one was in Wiesbaden, also in a 4 * Hotel and a Boutique Hotel- Fungus and Blood stains in the bathroom and room, I the room on the tapestry! This hotel we ahred with others for a conference, who also complained abt the state of the rooms. Thus Germans should not be too loud in complaining abt rooms and hotels elsewehere

The THird one was the WORST: I was travelling Emirates many years back and when I got off in Dubai, our connectingflight was cancelled, the next leaving the next morning, They put us up in a 3* (or less) Hotel, run by some Indian company. The room was damp, the carept was damp, the bed had a very soft mattress. In the night the carpet was wet! Don’t remember if there were any bugs, I don’t think, so, otehrwise, i would have remembered!

I complained with Emirates, which apologized and offered a compensation that if I fly within a year, I could fly Business class to anywhere- only that I didn’t avail it!

Oh yuck yuck yuck! I hate cockroaches! I’d rather see a mouse any day, though a rat vs. cockroach might be a stack-up between the two. That’s awful!

Glad you recovered from your horrible night.

I saw so many cockroaches these days, that I am almost used to it… but this is WRONG! Even this morning I was brushing my teeth when a big cockroach came out from behind the mirror. *good morning Giulia* :D

I know what you mean, Giulia. I had a pretty bad experience in Thailand many years ago not with a cockroach but an entire legion. I was shocked and I guess it’s one of the reasons why I remained suspicious of the country.

As for outing the hotel name, I don’t understand your scruples. A honest opinion – including the names -, for the good and also for the bad, is the reason I rely much more on travel blogs than travel guides.

Lots of people (starting from myself) will be grateful to know before they book this hotel (especially if it’s recommended in the Lonely Planet).

I will share the name, you are right… I don’t want people to go through the same! So I will update the post now. Thanks for your comment and sorry for the Thailand experience, that sounds horrible :/

Ok I finally gave in and read this post. And yuck!!! Honestly a rat or mouse would’ve freaked me out more than a roach but the roach is pretty freaky already. I’ve also never experienced bed bugs and I *really* hope I never do! So sorry you had this awful experience!

I don’t want to see any bed bugs anymore… it was seriously gross, even the following day I was still afraid to have some on me, and I washed all my clothes! I really really hope you don’t get to experience this.

I found bedbugs in my first apartment in Melbourne and was so grossed out that I left the next day and moved somewhere else. They’re just so gross and ridiculously difficult to get rid of. As far as bad hostel experiences go, I don’t think I’ve ever had it really really bad – apart from the obvious nuisances like them being dirty etc. I’m so sorry you had to experience this Giulia and I hope you can enjoy the rest of your time in Morocco :)

Oh yes the rest of the trip was so much better. :)
I think I never saw a cockroach until I started traveling (NYC was probably the first place) – the good and the bad of traveling!

Since I was a kid I’ve had a paralyzing fear of spiders. So this would FREAK ME OUT

Hello , my name is Saad and I’m from Morocco , I’m sorry you had to spend such an uncomfortable night , it would have upset me as well , but I’m more sorry for the rude behaviour the guy showed you , well , not all Moroccan people are like that , but I’d say 90% of illiterates are impolite ( I request you search for the percentage of illiterate people in Morocco ) , I’ve lived in this country for more than 18 years , but never took a liking to the people of my country . Sorry i got a little out of topic , well , put aside the people , Morocco is a country one would never regret visiting , I suggest you do some deep research about Ouarzazat and visit it next time you decide to come you’ll truly enjoy it , even though it’s soooo hot there