What going to Gay Pride parades around the world taught me

For me, travel is not only about fun and living a care-free life. Travel taught me more about “real life” than all the years I spent living in my country, especially when it comes to politics, society and human rights.

The first time I went to a Gay Pride parade it was in New York City in 2009. It was just 4 years ago, but things inside my mind have changed a lot ever since, on the topic too. 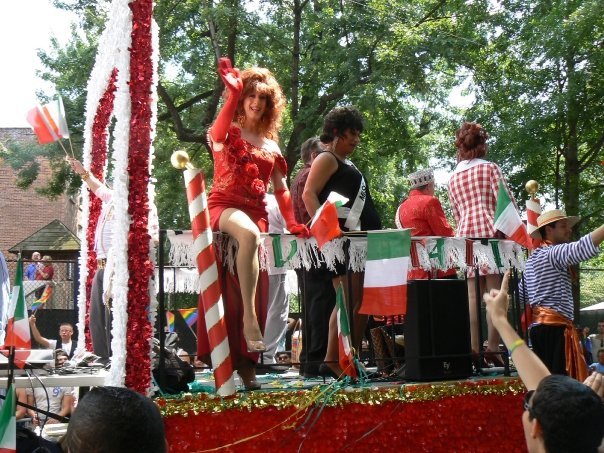 That one was probably the most eye-opening time for me, because I was expecting something that didn’t turn out to be the case. I admit – I went to the parade “just for fun”. I mean, I always supported the gay rights, but I never thought about the parade as a “serious” thing. Thanks to the way this kind of demonstration is portrayed by the media, I tended to belong to the “I have nothing against gay people but why a parade?” school of thought.

Then I went to my first Gay Parade. And instead of fun, what I immediately felt was sadness. I had an epiphany. I realized it was indeed very sad that in 2009, some people still had to come down to this to ask for some really basic things such as respect. 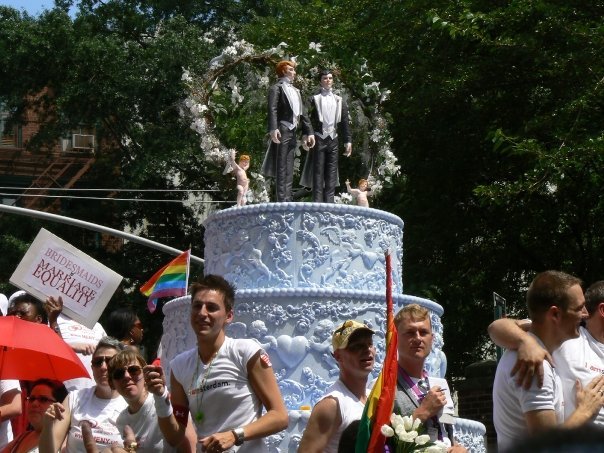 In the photo above, people are asking for marriage equality. This was 4 years ago. In the meantime, something did change, so these parades, together with many others initiatives, are not useless at all. Still, it’s a very slow process and there are too many countries in the world where the LGBT community has zero rights and/or is even threatened by laws against them, so there’s a long way to go. No no no, I am not even talking about some “third world country”, you can just think about Russia, where just a few days ago, among other things, the word “Gay” was made illegal by president Putin. Going backwards!

In 2012, when I left for my #MEtrip (Middle East Trip), I definitely didn’t expect to bump into a Gay Pride parade, but it happened! I was walking in Istanbul, Turkey when I had this beautiful surprise. 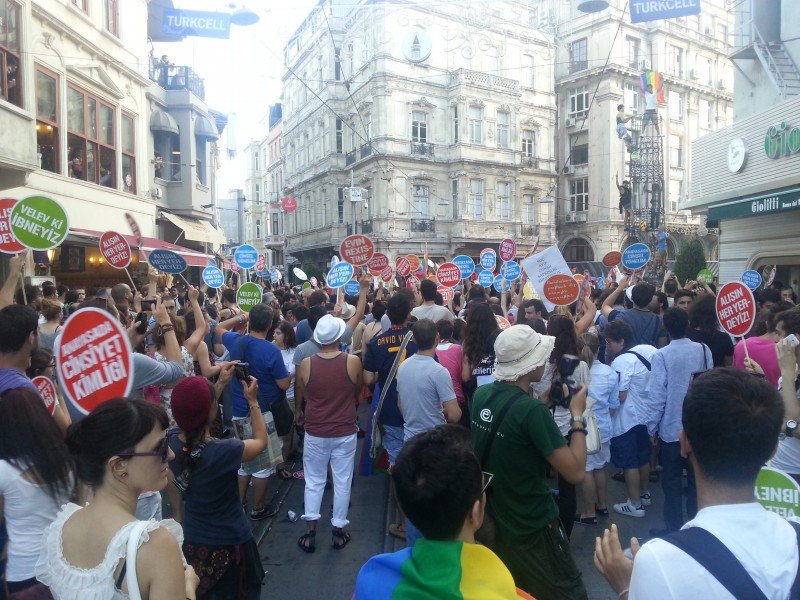 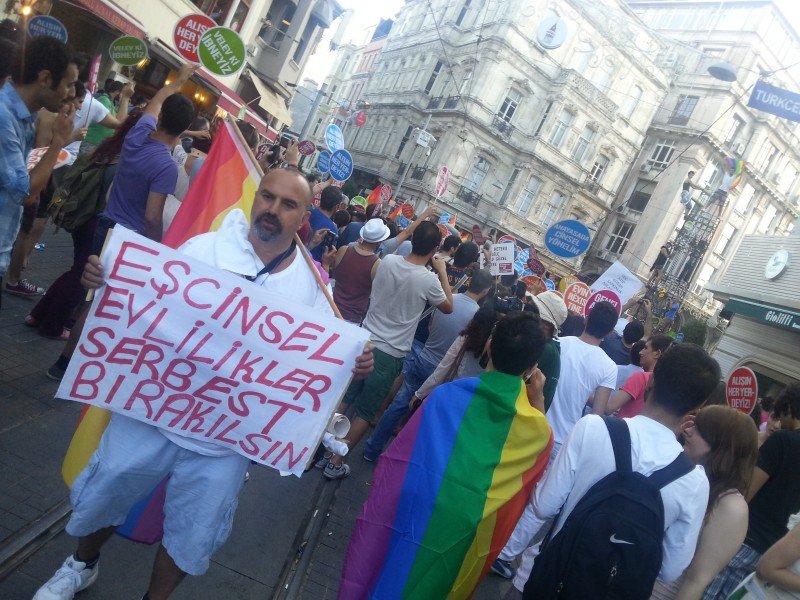 Great to see something was moving in the Middle East too! And this is thanks to the “Pride” movement of the west, that is spreading all around the world.

In 2012, a Gay Pride parade was organized in Uganda too, where death penalty for homosexuals is being discussed and taken into account by politicians. There’s nothing fun about participating in a Gay Pride parade in Uganda, when the people want you dead for who you are. And it’s again thanks to the Pride movement that someone had the guts to do it anyway.

Then, last June I was in Bologna, here in Italy, for the BlogVille Emilia Romagna project. In those days, I read the Gay Pride parade was taking place and I decided to go and show my support. 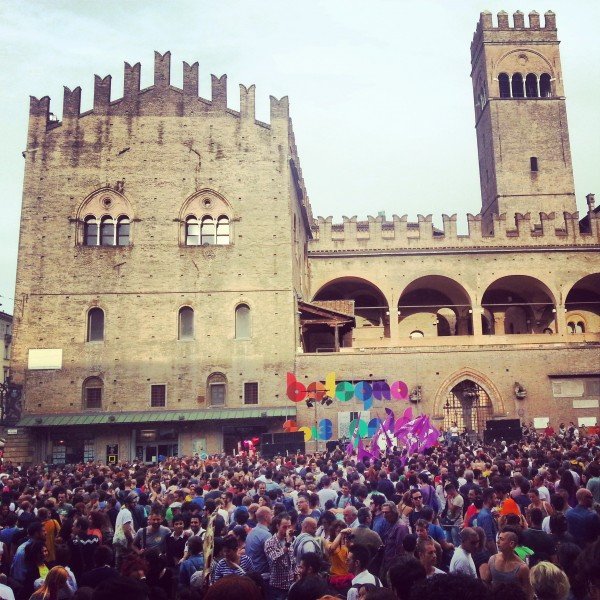 While in the square, I listened to a speaker that was passionately asking for rights. Very normal rights: respect, a law against homophobic actions, marriage equality. The same basic rights that are being asked by all kinds of people in every single place of the world! Four years later, it hit me again. That’s just too sad. How many movies have we watched where people fought for their rights? All movies about the past, right? Well, no, this is happening today. Why is this taking so long for the LGBT community to achieve what they ask for?

Let’s say there’s a country with death penalty against homosexuals, but the people don’t agree with it (in my dreams of course). The law won’t be applied! While in a country without death penalty but with a close minded population, there will be all kinds of crimes against them.

In my opinion, people are lazy. They don’t care about what doesn’t affect them directly. That’s the problem.

I am not gay, even if many people think so just because I am always fighting for the gay rights. The reason I do it is that I am passionate about it. What’s so weird?

My point is that in every fight for human rights, support has to come from everyone, not only from the ones involved.

Think about it: a violent man would expect a woman to complain about abuse, and couldn’t care less about what she thinks. But what if a fellow man (that is obviously not affected) tells him that violent men suck?

There’s something I want to say to the lazy people out there: one day your friend, relative, brother or maybe even you may need a right someone else is fighting for now. So you’d better not play dumb, and take a minute to think about the situations surrounding you instead. 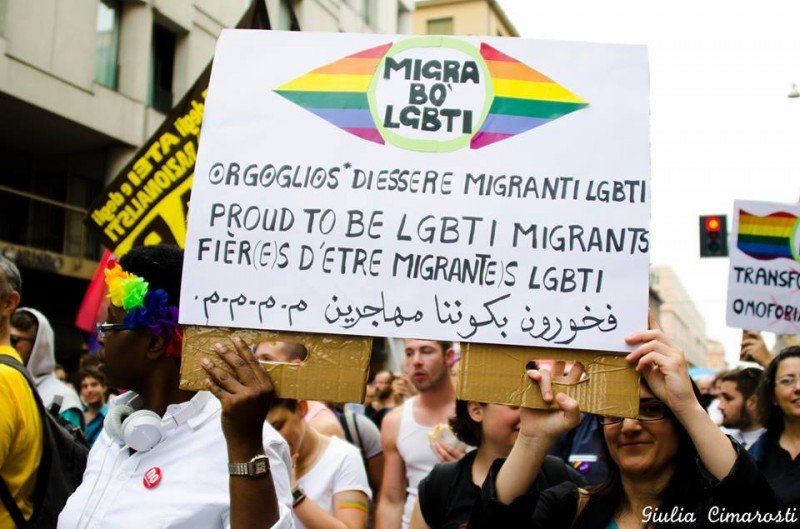 LGBT Migrants at the Gay Pride parade in Bologna

There’s an “excuse” many come up with all the time, I heard this story a million times from a million people: “I am straight and I don’t need to go to the streets saying what I like!“.
You’re right, except that: 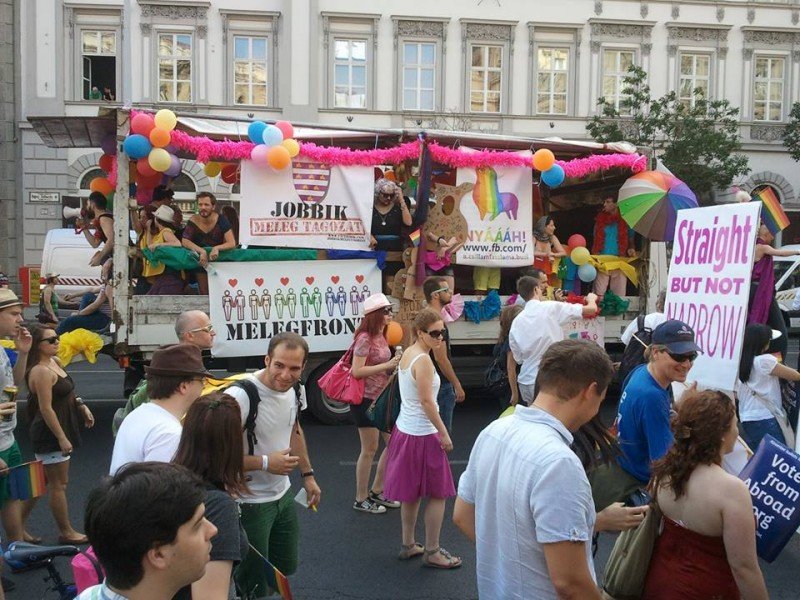 The 2013 Gay Pride parade in Budapest, Hungary – Thanks to Fabio Venturini, a reader, that sent me this pic!

So to sum it all up, as the banner in the photo above says…

be straight but not narrow!

This is what going to Gay Pride parades around the world taught me.

Thanks so much for this article and thanks for supporting our LGBT community!! Really appreciate your efforts and your words!!