Bathing in the Blue Lagoon in Iceland… but is it not COLD?

24 May ’13 In Iceland Planning Travel

Many people gave me confused looks when I said I was going to Iceland in the winter. I was asked many questions, but the main one was probably

But isn’t it COLD?

…especially when I mentioned that I was looking forward to visiting the famous Blue Lagoon. 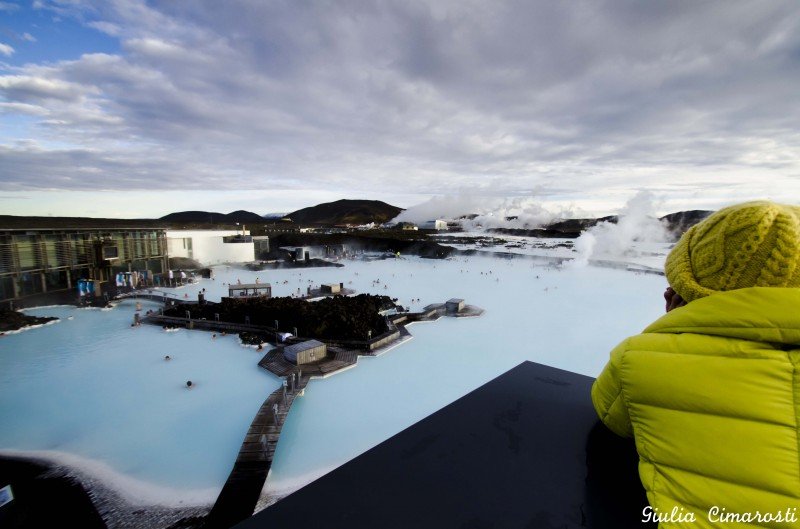 The Blue Lagoon in Iceland

I have to say I arrived to Iceland with a very bad bronchitis and fever, so I didn’t dare going to the hot pools (I know I missed out but I will do next time!) and I postponed my visit to the Blue Lagoon to the last day of my stay. I thought this way I was going to feel better in the meantime, and also I was going to relax after an intense week exploring as much as possible of the country. So yeah, I admit I was slightly worried too.

To answer the question straight away, no, it’s not too cold. Back in February when I went to the Blue Lagoon, the temperature of the air was pretty low, around 0°C, but not as cold as you would expect it from Iceland, right?

During my week in Iceland, I had some sunny days, rainy days and some snow too, but the temperature never went below -2°C or so. Pretty impressive if you think that on the same days back home (in Italy) it was colder! On sunny days, especially when I went to the Golden Circle and South Coast, we had up to 7°C which was really nice and enjoyable. I only felt really cold at night while waiting for the northern lights, and when I walked very close to a glacier (I felt like an olive in a cocktail). 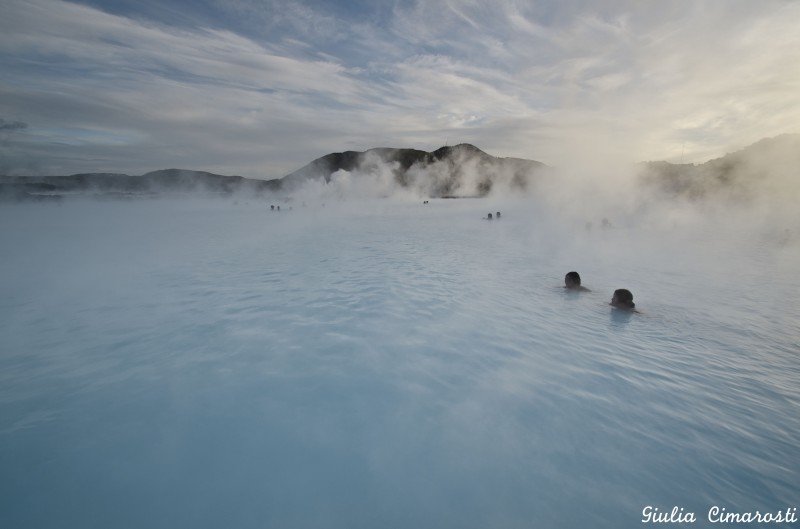 Swimming in the Blue Lagoon

Going back to the Blue Lagoon subject, here’s what you need to know about it if you’re afraid it will be too cold.

When you arrive to the structure, you will have super warm changing rooms and showers (you have to shower! It’s obligatory otherwise you’ll be scolded by the guardians) and you will be given a bathrobe.
Then, to walk into the hot pool, you can either: 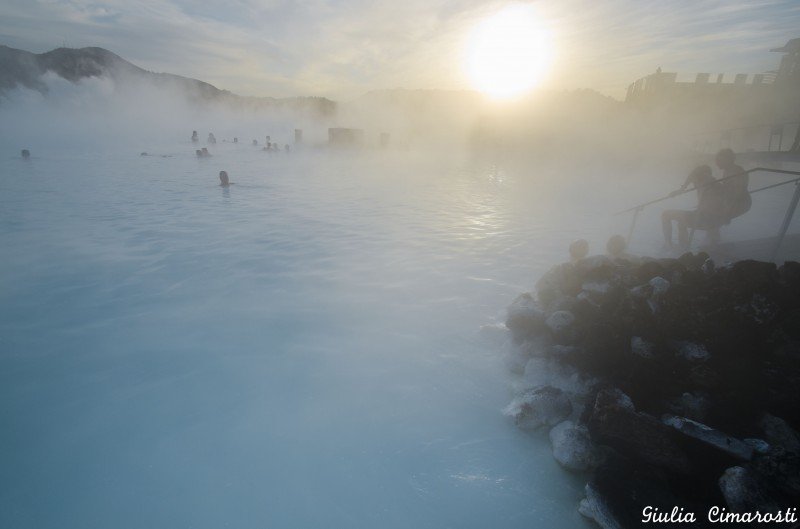 Entering the steamy waters of the Blue Lagoon

Either way, you won’t feel too cold. The water is 38-40°C so very hot, and a warm, romantic, cozy steam covers the whole place. When you need to get out, it’s usually just for a few seconds until you reach the sauna, steam bath, or another side of the pool. So you won’t have time to feel cold, really!

Now that I think of it, I’ve been to a thermal spa in Italy once and it was somehow similar, and we had snow all around. Still, people think it’s cool. So why is the Blue Lagoon such a big issue? Just go and enjoy it! 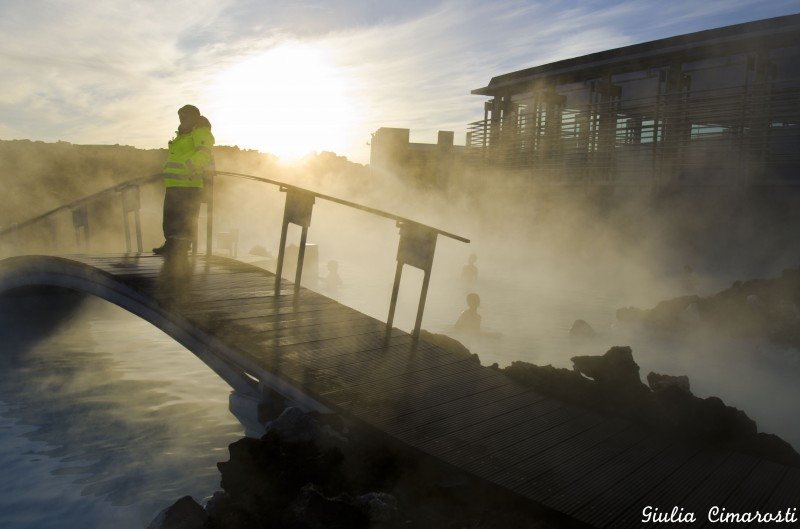 Lifeguard at the Blue Lagoon

They say it’s better not to put your hair in contact with the water at Blue Lagoon, because it makes it really dry. But I have to say my ears got really cold from time to time so I did put my head underwater. But at the end of the day, I didn’t have problems with my hair. Put a lot of conditioner on your hair before entering the water and you’ll be fine! 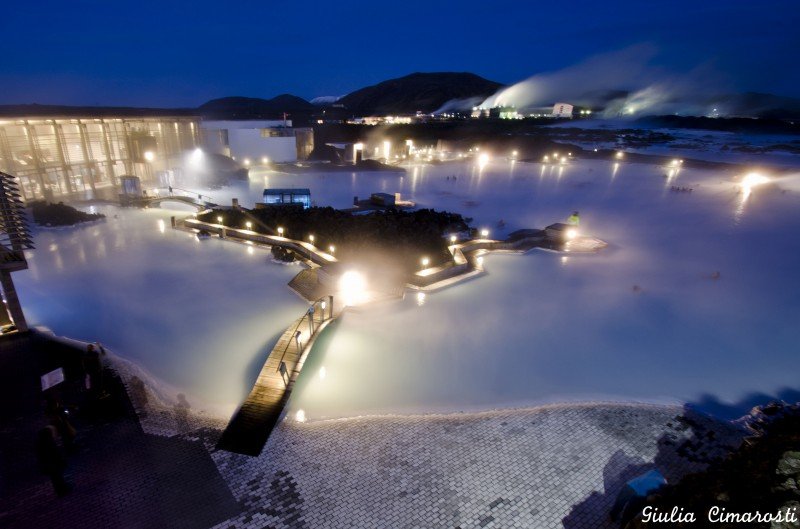 The Blue Lagoon by night

Still not convinced that it’s not that cold in Iceland even during the winter? Okay then, let’s see if from a scientific point of view.

Without the Gulf Stream, Iceland would live up to its name.
-Páll Stefánsson, Atlantica, February 2013

I found some really interesting information on the Icelandic Iceland Review/Atlantica magazine during my stay. Here are some really cool facts that will make you change your mind about the weather in Iceland: 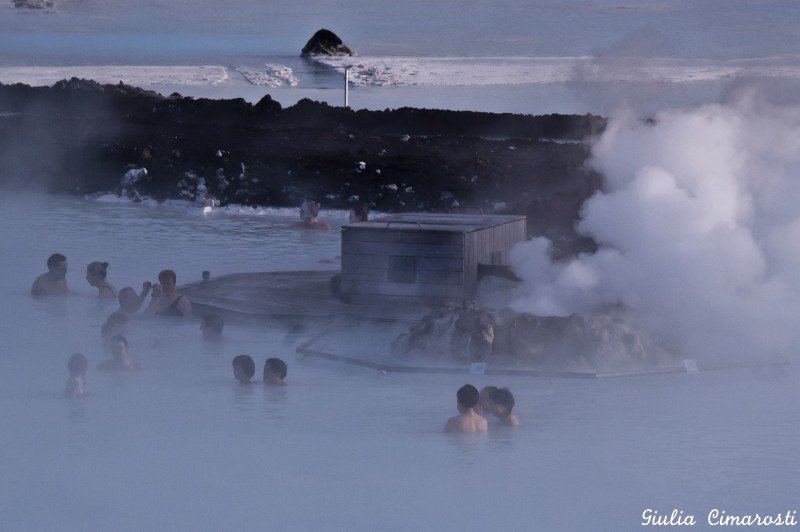 Here’s the “crater” the hot water springs from. It’s very hot around it!

I would totally go back to Iceland (and the Blue Lagoon, and the hot pools) on February: the weather is OK. You can get a lot of snow but also bright, sunny (and fairly long) days. Plus there is a huge bonus – the Northern Lights!

Thanks to Blue Lagoon for offering me a complimentary ticket. I had a great day and my skin looked better than ever afterwards!

How much does a ticket to the Blue Lagoon cost?

Hi Natali! Tickets start at 33 Eur – here are all the details and rates: http://www.bluelagoon.com/blue-lagoon-spa/prices-and-packages/experience-packages/ :)

This looks like the perfect birthday getaway, since mine is in February! Thanks for the tips :)

I could not stop staring at the photos, I really love the one at night.
What a great experience. I would love to go!
And seeing the Northern Lights must be amazing.

Thanks Mica, glad you liked the photos! It’s dreamlike… well all Iceland is:)
Northern Lights are a must for each person on the planet!

Bathing in the Blue Lagoon in Iceland… but is it not COLD? | blog … | Iceland travel guide Reply

[…] and bathe in the Blue Lagoon during the winter, you may want to read this to clarify your doubts! Read more at travel to Iceland – Google Blog Search Related […]

Thanks for really putting it all into perspective. It’s true many people have their concerns when friends are traveling, and refreshing to see you take some time out to tastefully point out things to address their concerns. I have a few friends who have been to Iceland, and all I ever hear about the place is really good things.

It´s quite overpriced, but the crowds are pouring in anyway. This place is just as popular as they say and I have to confess it was impossible to forget about everything around me and entirely relax..But the lagoon itself is quite big so the best thing you can do is find yourself a quiet corner and try. It´s a fairly unforgettable experience nonetheless, with its milky blue water and steam rising up it´s a visual feast.

Thank you for this great information! I am taking my mom to see the Northern Lights in Iceland on January 30th and part of our trip is to go to the Blue Lagoon.

I was so excited after completing all the bookings and everything, and then it dawned on me that it is winter! I got carried away looking at the Blue Lagoon photos and forgot that we are going there during winter. Then, I saw this post while looking for some insights on what it would be like to go to the Blue Lagoon in early February.

My mom has severe arthritis in her knees, but she can walk. I do not want her to get sick and ruin this vacation that I have planned for her.

Thanks and best regards!

Hi Ruel! Well, winter is the best time to see the Northern Lights, all you need is a clear sky and some luck! They are indeed unpredictable, but the solar activity is so strong lately that I would be more than positive. Just look for the clear skies! Safe trips :)

Hi Giulia.. what time did you get to the blue lagoon to have those awesome pictures?

It was during the day. In the winter, the sun is always low on the horizon and it looks like a constant sunset. Great light for photos. :)

Hello Giulia!
How much does a ticket to the Blue Lagoon cost?
Thanks
Natali

Hi there,
You can see all packages here: https://www.bluelagoon.com/day-visit/the-blue-lagoon