Here’s another day trip from Reykjavik I had during my recent stay in Iceland. The “South Coast and Volcano Show” route takes you to the south of Iceland, all the way to Vik, where those beautiful rock formations rise from the turbulent ocean. And on the way, there’s so much to see, do and… learn! 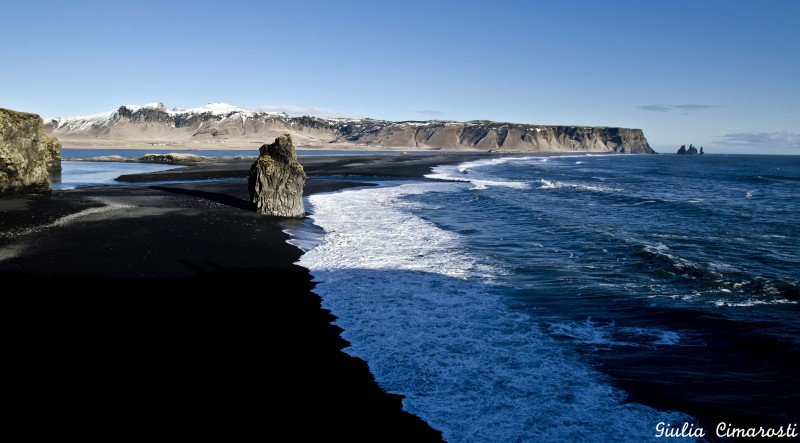 This is a pretty long trip, that takes about 12 hours. I met Jona, the travel agency representative, at 8 am after a night out hunting the Northern Lights (and it was successful! So no matter how tired I was) and I remember being back to my flat at about the same time in the evening. Yes, because Sterna‘s trips are so awesome they even pick you up at your home/hotel, and bring you back at the end of the day!

As stated on the website, the south shore is an instant classic that offers a visit to two waterfalls, the black sand beach of Reynisfjara, Sólheimajökull glacier (you can touch the ice), Visit to cape Dyrhólaey as well travel about 150 years back in time in the Folk museum of Skógar. We end the day by visiting “Eyjafjallajökull erupts” visitors center where we learn about the volcanic eruption of 2010 from the people that live right under the volcano.

The journey from Reykjavik to Vik and the stops in between

This waterfall, that I was so lucky to see by night as well on my Southern Iceland road trip, is a very famous one where you can walk behind the waterfall itself in a natural tunnel. I didn’t try this as the path gets icy and slippery during the winter, but I know other people did. I bet it’s amazing. But I had my share of walking behind waterfalls in Mígandafoss. 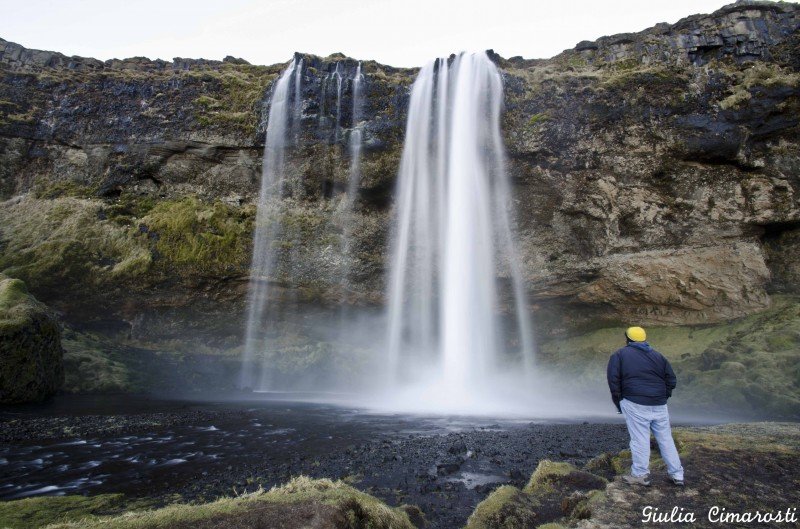 This was one of the things I was looking forward the most: the Reynisfjara Beach, with its black volcanic beach, and the beautiful basalt columns and caves.

Basically every stone on this beach is one of the so called “lava bombs”: they exploded out of volcanoes and now lay here. Not that I didn’t know, and not that Iceland didn’t do the job already, but this is one of those places where you are reminded that nature is awesome. Seriously. 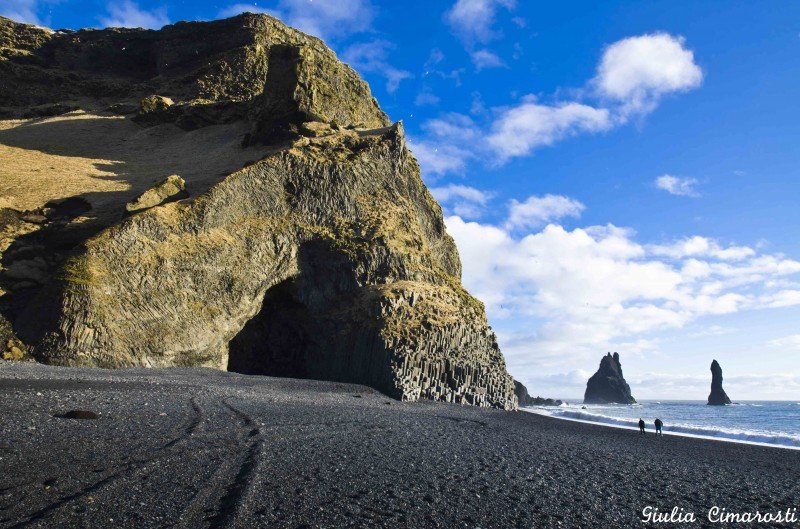 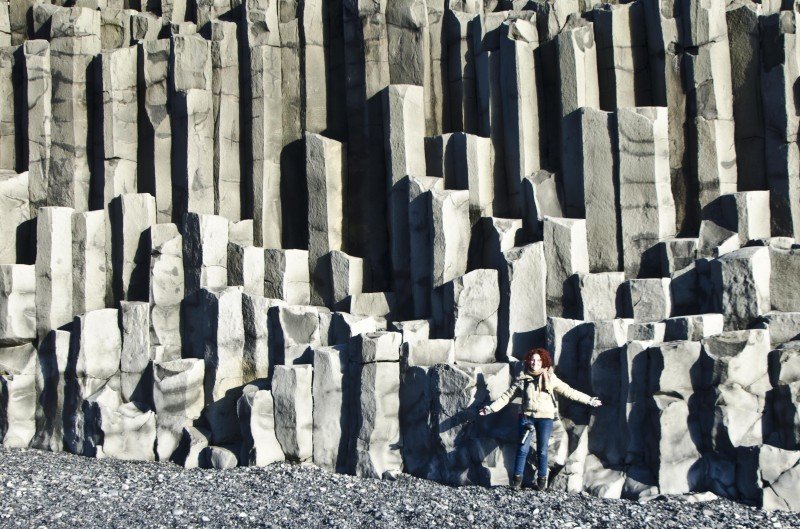 These cliffs are so majestic, with their black color and the loud noise of the ocean’s huge waves all around!

Did you know that Kötlutangi is the southernmost point of Iceland? And that there’s nothing between it and Antarctica? You could literally swim or sail down there, to the other side of the planet (!!!) without encountering anything on the way.

This is one of the cool anecdotes I learned on this trip.

Another must see natural landmark in Iceland. This waterfall is where the former coastline was, so the water comes down from what once was a cliff in the ocean. Such a cool fact!

If you’re lucky, on sunny days you can even see a rainbow across the waterfall. I didn’t, but oh well! 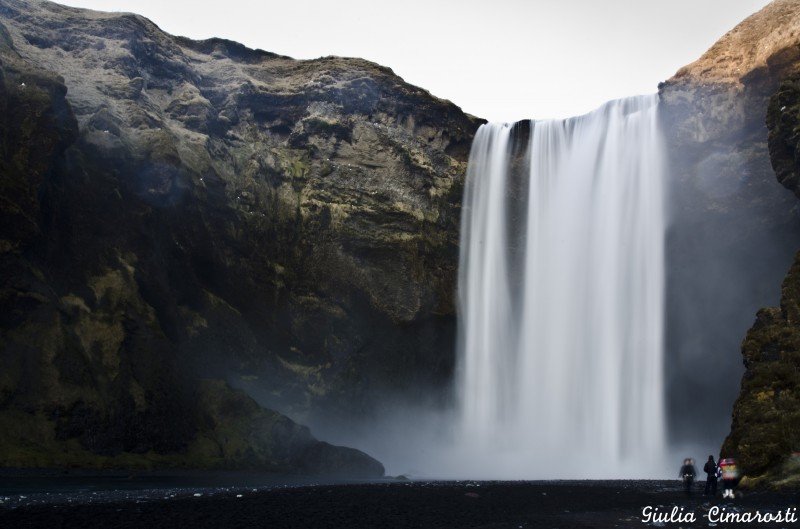 I am sure you’ve seen many glaciers at least in photos, but did you ever touch or walk on one?

We left our minivan as close to the Sólheimajökull glacier front as possible, and then walked all the way to its edge. On this short hike, the sign that the ice left moving backwards is very clear: the soil is irregular, broken and crossed by little streams of water. I particularly liked the ice caves inside the glacier, where the guide advised not to go, but as far as I know some people go explore them and even camp inside. I didn’t dare, and only observed them from the outside.

Just for the records, when you are close to the glacier, the temperature drops. I know it’s pretty obvious, but it was funny feeling like an olive in a cocktail for once! 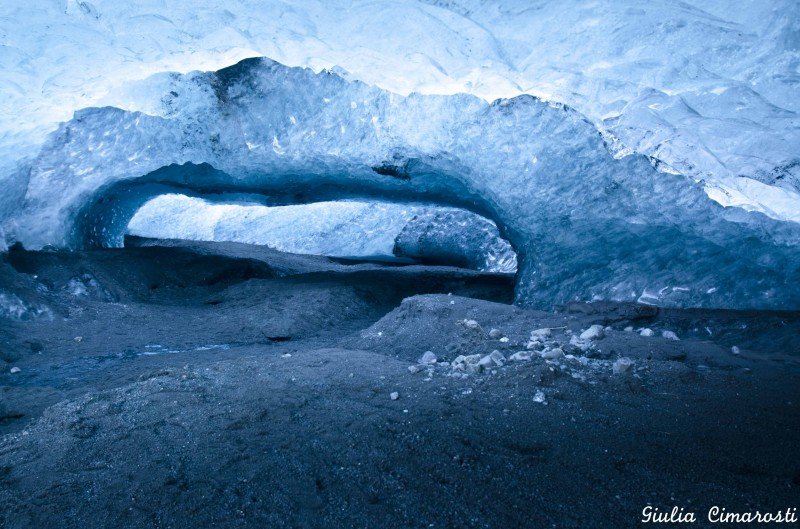 An ice cave in the Sólheimajökull glacier

If you want to know everything about the Icelandic history, then this is the right place.

Not only the Skógar Folk Museum has a vast collection of objects belonging to Iceland’s historical heritage on display in a three-storey building, but there is also an outdoors display consisting in real historical Icelandic houses that you can visit to have an idea of how people used to live. 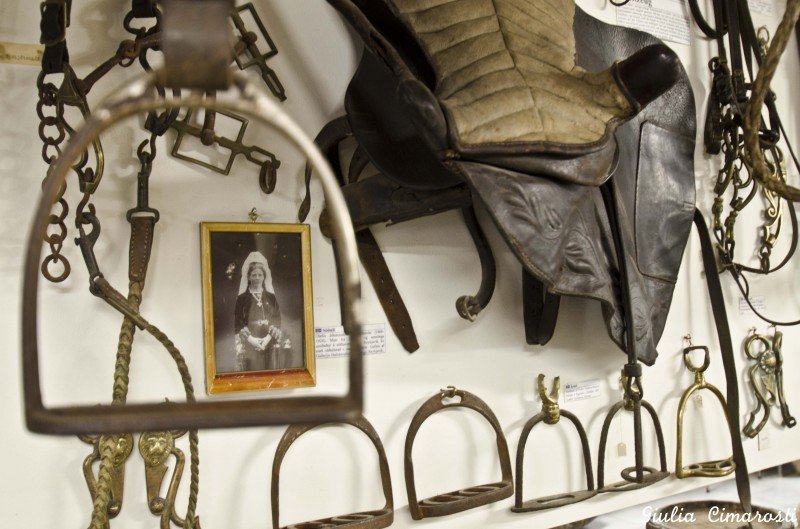 Inside the Skogar Folk Museum 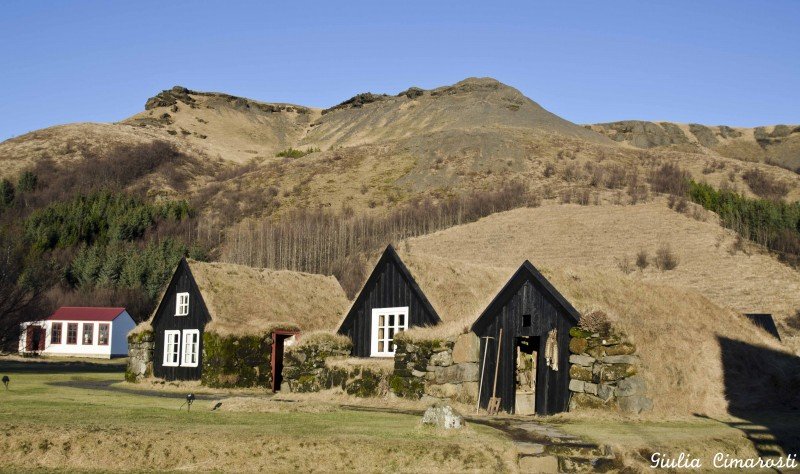 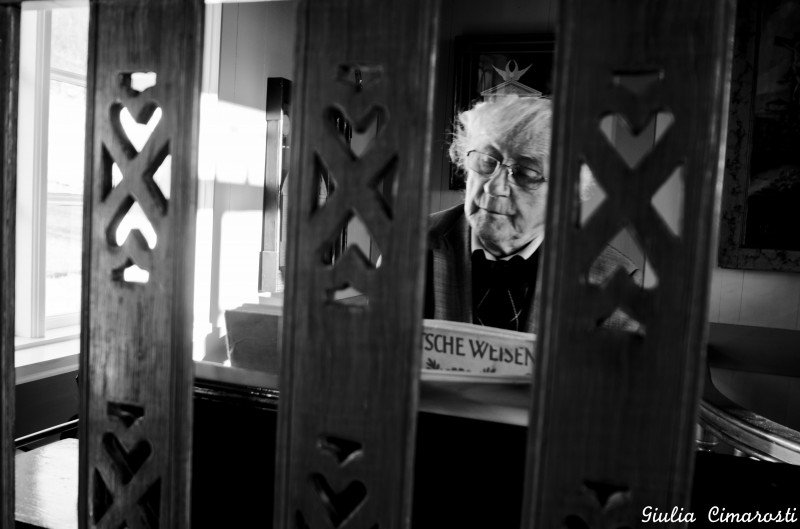 Þórður Tómasson, aka “the genius behind the museum”, playing organ in the village’s church

Last but not least, the star of the tour: the Eyjafjallajökull Volcano! First of all – can you pronounce it? If not, you can just call it “E-15”, as some people do. E-15 stands for E + 15 letters!

You can’t really see the volcano itself, because it’s below the glacier, but you pass by it on the way and even grab some of the black ash it erupted on 2010… remember when all flights were canceled because of it? 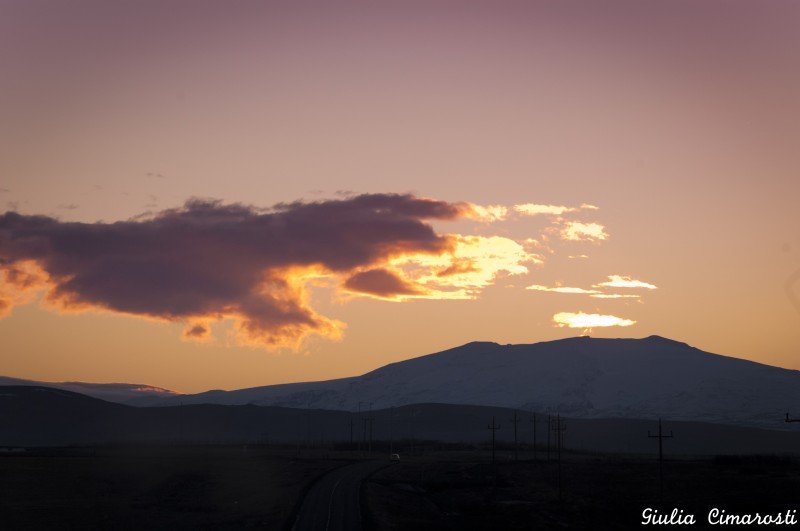 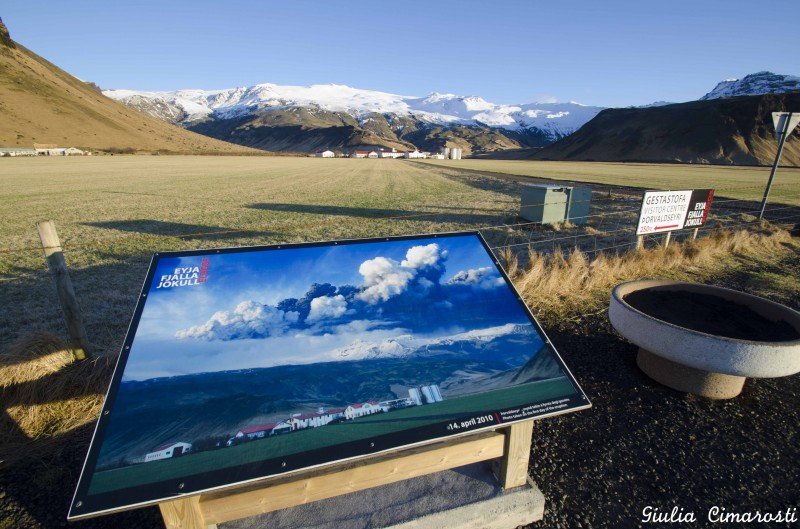 Eyjafjallajökull – today and during the 2010 eruption

At the “Eyjafjallajökull Erupts” Visitor Center we were shown a 20 minutes video about the consequences of the 2010 eruption on the local population. See that farm just below the volcano? It was covered in ash, flooded and nearly destroyed.

This was a fantastic tour and I would recommend it to anyone visiting Iceland. What are you waiting for? Go to Iceland, and book day trips with Sterna Travel. :)

Ahhh I love your photos and love everything you did in Iceland. Reading this really moves Iceland up on my list of countries I must visit sooner than later. I wanna touch a glacier damn it.

I hope you get to visit Iceland next time you travel… you won’t be disappointed! And you can touch sooo many glaciers :)

[…] really beautiful tours from Reykjavik as I did twice: you can read all about The Golden Circle and The South Coast and Volcano Show day tours! This is a great way to see all the most famous landmarks in a range of a few hours from […]

Bathing in the Blue Lagoon in Iceland... but is it not COLD? | travelreportage.com Reply

[…] back home (in Italy) it was colder! On sunny days, especially when I went to the Golden Circle and South Coast, we had up to 7°C which was really nice and enjoyable. I only felt really cold at night while […]

do you have a pricelist for your tours in Euros or GBP?

I’m not a travel agency!

Great informative post and helps so much when planning a trip to Iceland.
Which tour company did you use for this specific tour?

It was Sterna Travel :)