I found that being based in Reykjavik and taking day trips from there was a good strategy, so I didn’t have to keep moving, packing and unpacking, and I could always go back to my cozy flat at the end of the day (then literally through my stuff on my bed and go out again to see the Northern Lights, but this is another story!).

If you don’t have a car rented on your stay in Iceland, or if you don’t feel comfortable driving too much (especially in winter) then day trips are the thing for you. 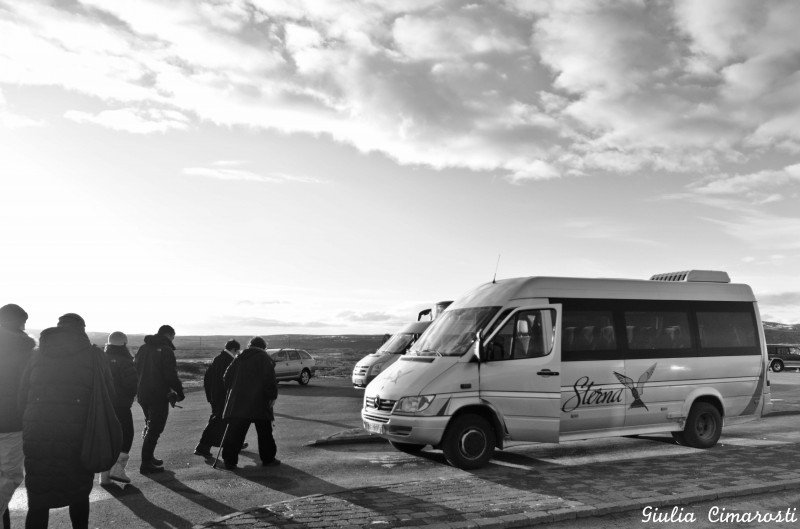 When in Reykjavik, you will find there are many tourist information offices offering a wide range of day trips and excursions, so it may be hard to pick a tour operator over another when they offer a similar itinerary. For me, Sterna Travel was the perfect choice because I don’t like to be on big buses especially when it comes to visiting natural landmarks.

The first day trip I took, on my day #5 in Iceland, was the “classic” Golden Circle. Why classic? Because this is the part of Iceland that every traveler will visit, on any season. In other words, this is a route you can’t miss!

300 km among volcanoes, geysers, waterfalls, continental drifts… this is the Golden Circle!

One of Iceland’s many beauties is the fact that basically all energy is sustainable, and comes from the underground volcanic hot waters. The steam is used to produce energy, and the water is pumped back into the ground so that it heats up again and the perpetual circle can go on. This is the most powerful power plant in the world, and Icelandic people are fittingly proud of it. 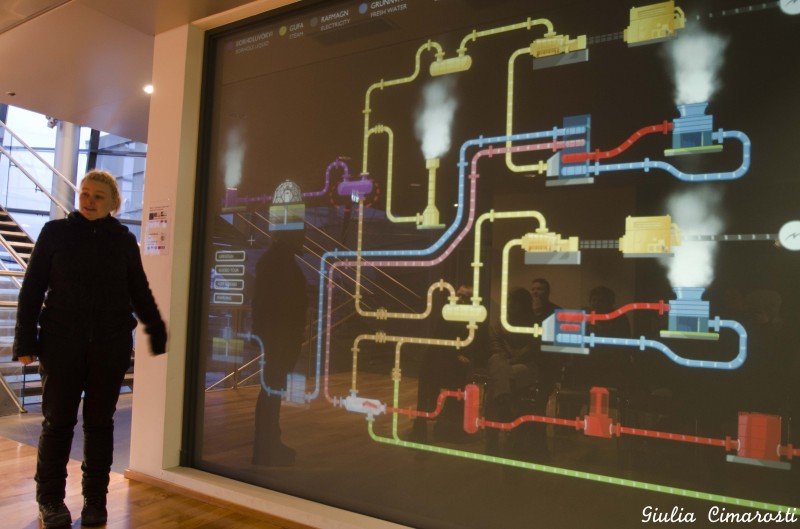 Jona the guide showing us how the plant works

I admit I didn’t grasp every single technical aspect of the power plant processes (hey it was early in the morning and I didn’t even have a coffee!), but for sure I was impressed with its architecture: it represents the two tectonic plates where the geo-power is harnessed from directly beneath your feet. 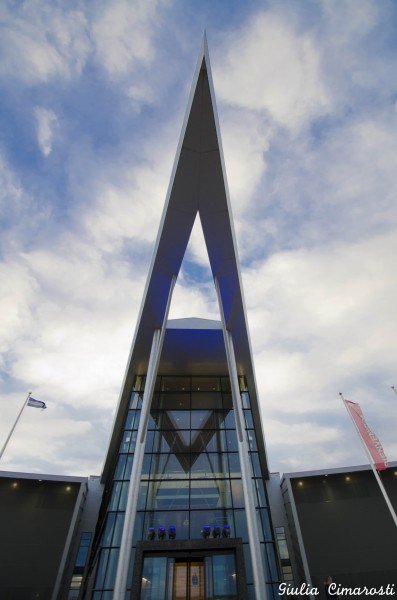 The entrance to the power plant

When you visit this, you can say you climbed a volcano! Well it’s not tall at all, almost on the street level, but once you reach the top it’s a great surprise! The 55m deep crater has a lake in it… which was frozen when I visited it. So beautiful!

Jona, our guide, told me that Björk the singer once had a concert inside this crater, with a stage mounted over the little lake, and people sitting on the sides as in a Roman Theater. How cool is that?

The crater of Kerið

When in Iceland, expect to visit countless waterfalls. For me, this was something I wasn’t used to, because well, the Middle East doesn’t have many waterfalls! It was exciting to see the Faxi Waterfalls, which is defined as a “small one” but didn’t seem small at all to me. The sun was rising and in backlight, so the light conditions were not the best for photography, but definitely a beautiful sight. 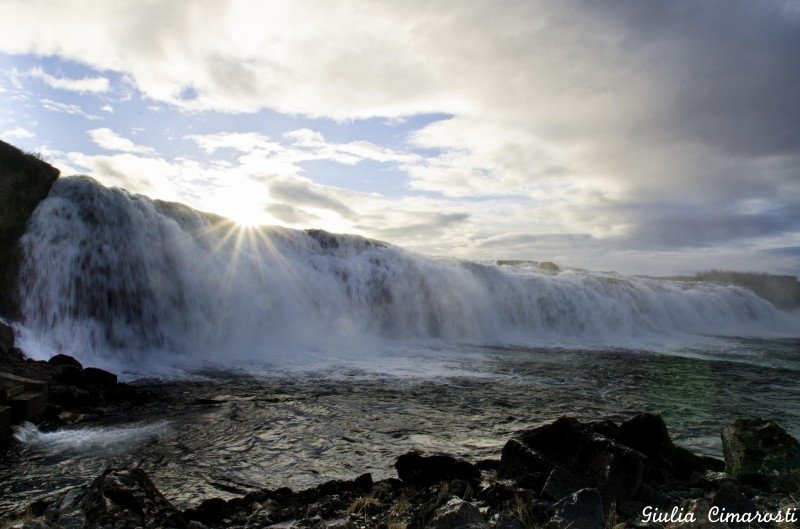 This place is incredible. The Gullfoss Waterfalls originate from the Hvítá river, made of glacier water. What makes Gullfoss so unique is that the water falls into a deep gorge.

It looks like the water is just falling into the Earth because you can’t see the bottom of the canyon. The scenery is surreal, misty, majestic.

I was so excited to finally see the geysers! I would say that the Northern Lights and the geysers were the things I was looking forward to see most. And I wasn’t disappointed, in both cases!

The Geysir Area is a valley full of geyser activity. The name “geyser” comes from one of these hot water springs in particular, which is not the one that erupts though! Or better, it used to but it doesn’t anymore. Geysers are not predictable and they can start and stop erupting whenever they want to. I like them, because it’s as if each geyser has its own personality… 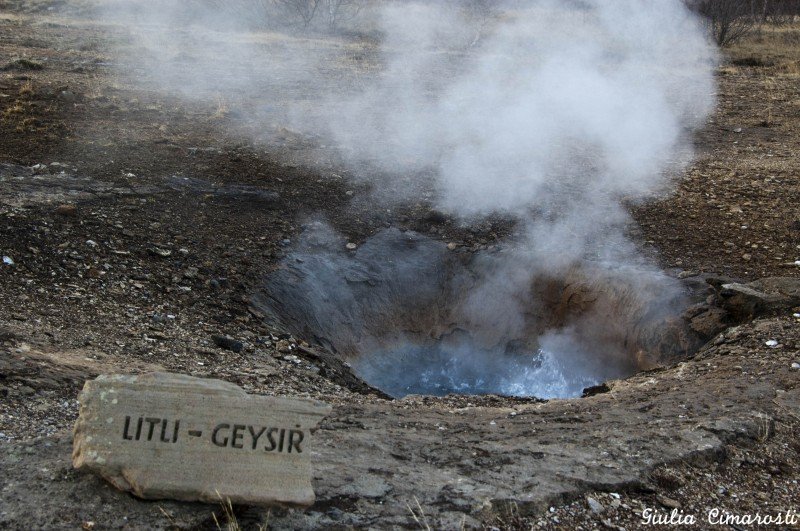 Litli Geysir, a small but active geyser in the Geysir area

The geyser that does erupt is called Strokkur and the water can reach more than 20 meters, sometimes even up to 40 meters. Impressive! Every few minutes there’s a new eruption, it’s both fascinating and scary at the same time. 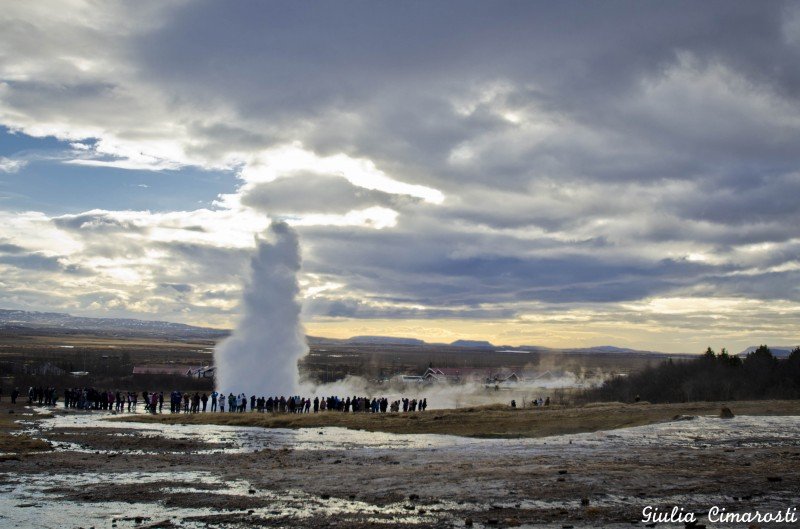 The Þingvellir National Park, just outside of Reykjavik, is the oldest national park in Iceland. It’s also a beautiful and special one. Why special? Because it lays over the two tectonic plates (Eurasian and North American), and the drift between them is visible in the canyons it formed.

Þingvellir is also where the first Icelandic Parliament was established and remained there until late 1700’s. 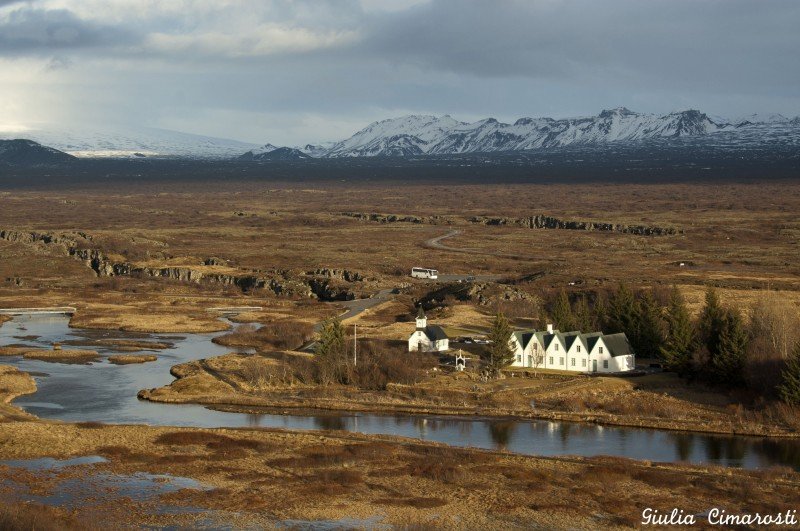 The Þingvellir National Park, with the canyons formed by continental drift

The beautiful Golden Circle tour gives you a taste of Iceland’s nature. No matter how short your stay in the country is, go for it!

What I liked about doing it on a tour instead of on my own was that:

Did you know Iceland has 13 different characters for Santa Claus?

Thanks Sterna Travel for having me on your Golden Circle Tour!

Info: tickets are available online with a discount, or you can buy them at the Harpa Concert Hall in Reykjavik.

Truly amazing pictures. It would be very exciting to see those beautiful waterfalls.

You have to go!

Holy crap all your photos from Iceland made my jaw hit the floor. As usual you’re doing some great camera work Giulia, keep it up! Looks like you’re having a great time up. Just please be the one person who remembers to take their camera out when you see a yeti ok?!

Hey Dave, thanks, your comment made me smile!:)
Unfortunately I left Iceland a few days ago, but I want to go back so badly… it’s such a beautiful country!
And didn’t you realize I am the yeti? Hehe:)

Great pictures! I so want to go to Iceland!

Thanks Marysia:) Yes you have to go, it’s beautiful and I never heard of anyone who was disappointed with Iceland.

Thank you for your efforts to creating lovely post, my thoughts about Geysir: You will be mesmerized when the geysers erupt around you. Feel life beneath your feet. and
Þingvellir – The first destination in the golden circle and also the location of the first parliament of Iceland. It is only 40 minutes drive from Reykjavík and it´s known for the continental drift between Europe and America. It can be clearly seen in the cracks.

Lovely post and good efforts, my thought about Geysir – The second destination in the Golden Circle and one of Icelands main attraction for tourists, as it is one of the few places in the world where natural geysers erupt frequently and reliably

Where to see the Northern Lights in and around Reykjavik | travelreportage.com Reply

[…] the national park in the day too because it’s really scenic. This is usually included in the Golden Circle tours. The Thingvellir National […]

[…] eco-friendly heating. In Iceland, heating comes from geothermal energy, and is therefore eco-friendly and renewable. Which is really cool! But practically speaking what I […]

Bathing in the Blue Lagoon in Iceland... but is it not COLD? | travelreportage.com Reply

[…] on the same days back home (in Italy) it was colder! On sunny days, especially when I went to the Golden Circle and South Coast, we had up to 7°C which was really nice and enjoyable. I only felt really cold at […]

Traveling in Reykjavik is great when anyone choose day trips. It will not require any packing and unpacking as well as residing in hotels. “Classic Golden Circle” is a good idea package for traveling in Iceland as it offers travel in any season. The Hellisheidavirkjun Geothermal Power Plant is a great place where energy produced for Icelandic people. In fact, this is the best and most powerful power plant in the world. The Kerið Volcano is like a volcano, which has 55m deep lake. Sometimes it becomes frozen and sometimes it becomes normal. The Faxi Waterfalls of Iceland and Gullfoss Waterfalls are incredible to watch with beautiful sight to visit. The Þingvellir National Park will also give you unique feeling that is found in 1700s and the oldest park of Iceland.