The beautiful South Coast of Iceland on the road

On my “day 4” in Iceland, I was so lucky to get a ride back from Höfn (or Höfn í Hornafirði) to Reykjavik, kindly offered by a group of 3 local photographers. Not only I found a way to go back (buses didn’t seem to run on Sundays) but I even had the right company: there’s no need to say we stopped a million times on the way to take photos of the many beauties we encountered. 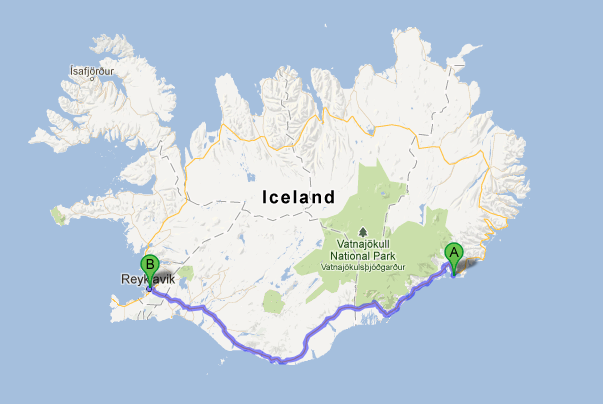 Our journey: A to B (Höfn to Reykjavik)

Normally it’s a 5 hours long journey (weather permitting), but in our case of course it took longer. We were not in a hurry, and the weather was sunny: the perfect conditions for photography!

Before I met the three photographers, a beautiful sunrise in Stokksnes, near Höfn, gave me the perfect start for the day. 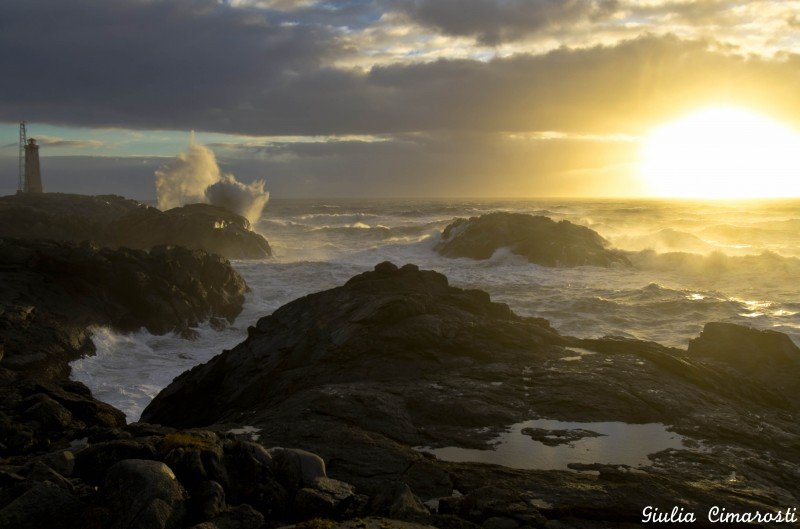 Our meeting point was Jökulsárlón, the lagoon where icebergs detached from the Breiðamerkurjökull Glacier float. Well, in winter the sun never gets very high on the horizon, so there is always a very nice “sunrise effect” in terms of light. One hour after sunrise, I took this striking photo of the washed out icebergs, lying on the Breiðamerkursandur Beach, close to Jökulsárlón. 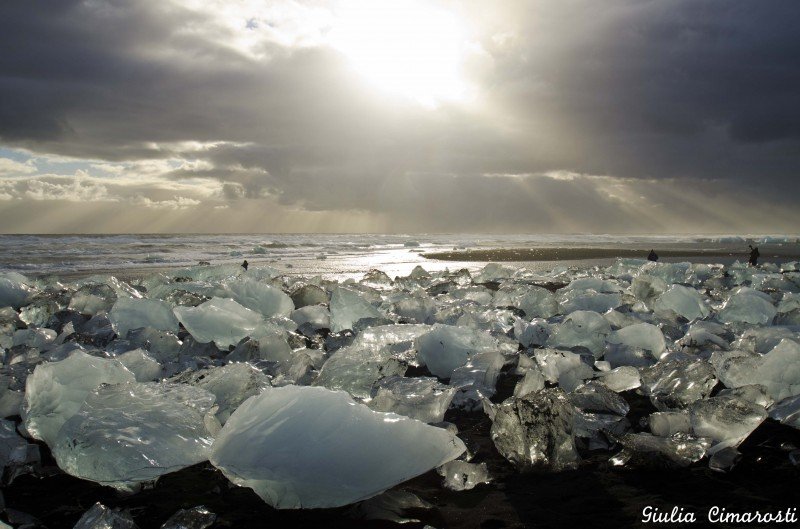 The sun rays over Breiðamerkursandur and its icebergs 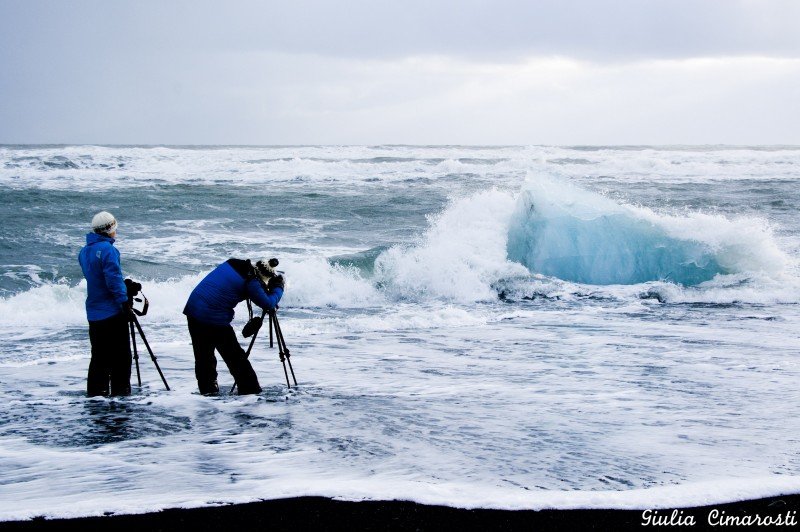 Driving on Road 1 (the only road that goes around Iceland) in this area of Iceland, you can see many glaciers on your side. In fact, there’s one main glacier (Vatnajökull, covering the 8% of Iceland) but every time a part of it stretches out from the main glacier, it takes a new name. Breiðamerkurjökull is an example! There are more than 30 “outlet glaciers”.

Not far from here, there is one of the most special landscapes I’ve ever seen: Fjallsárlón. Here, the glacier melts forming a lagoon and a river, but on winter the surface of the lagoon is frozen. The other photographers ventured themselves on the ice, while I didn’t dare trying, but this gave me a great vantage point to take photos while waiting for them. 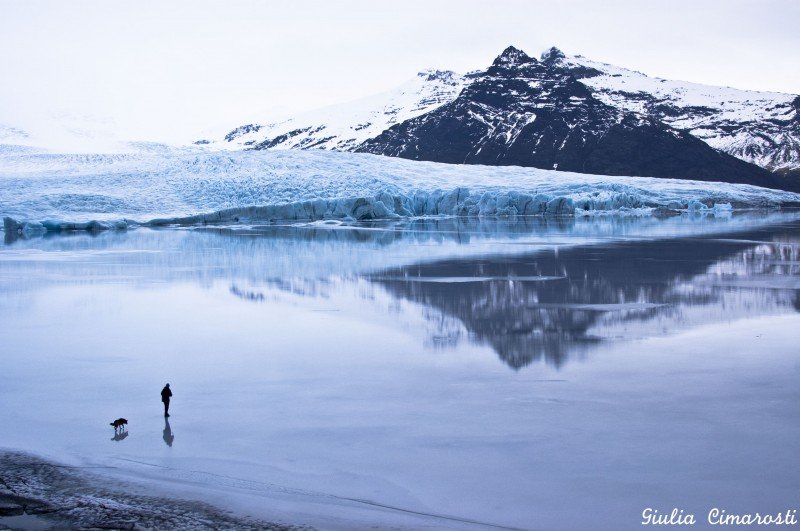 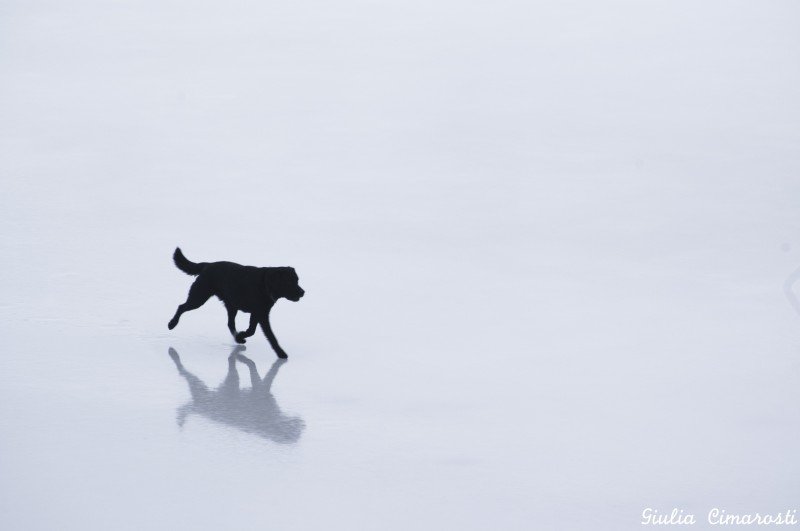 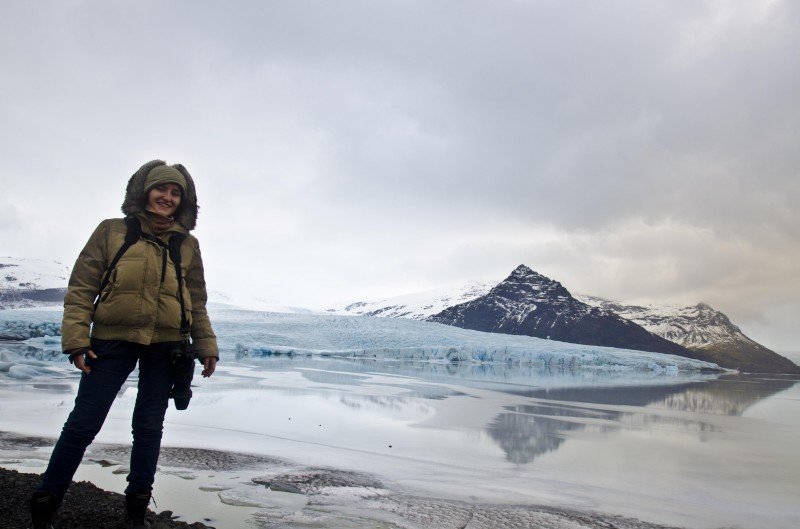 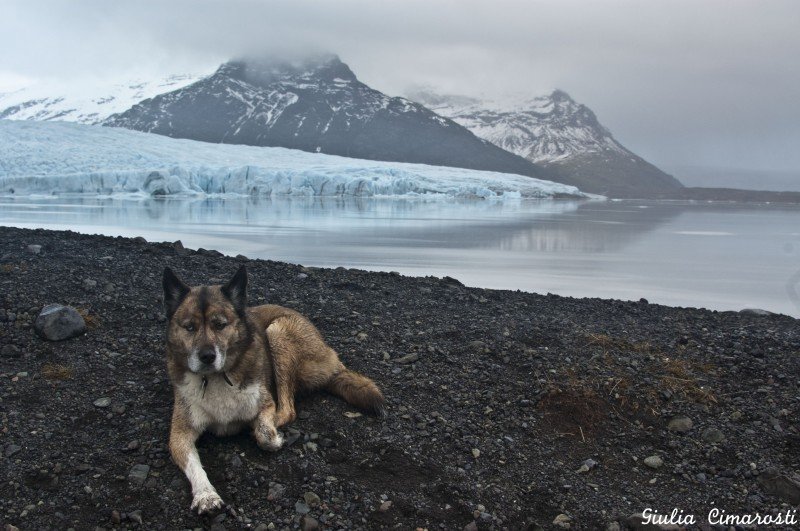 Balto the dog posing in Fjallsárlón

After 2 days of rain, the ice was incredibly clean and blue, with beautiful reflections of the mountains above.

We continued our journey to Reykjavik. The landscape in Iceland is ever-changing, never monotonous, always surprising. On one side we had the ocean, and on the other one high, oddly shaped volcanic mountains overlooked the road. 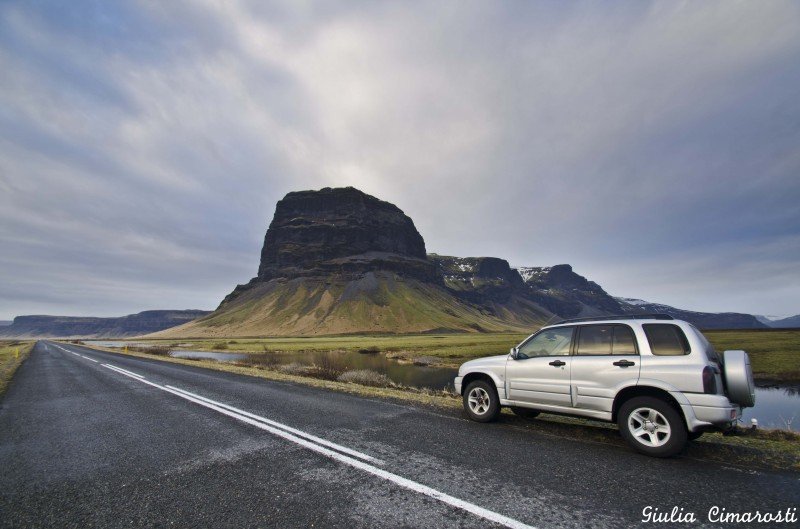 Every time we saw some landscape that we liked, we stopped and took our time to take photos.

The glaciers of Iceland generate innumerable streams of water and waterfalls, that can carry more or less water according to the rain. As I said, that was the first sunny day after 2 days of heavy rains, therefore thanks to the big amount of water the rivers and the reflections were beautiful in a special way! 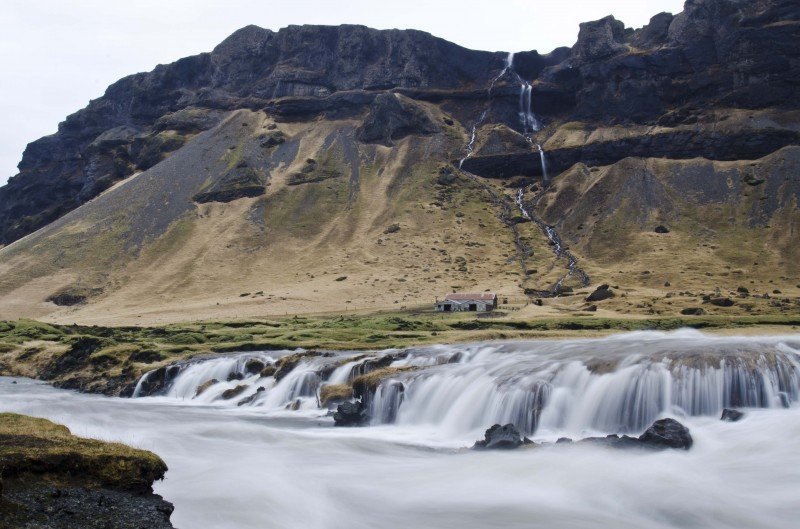 A farm, a waterfall and a little river, on the way to Reykjavik

There are almost no villages on the South Coast of Iceland, mostly only farms. On our way though, we encountered a church with a small cemetery on the side. Here is how it looked like: 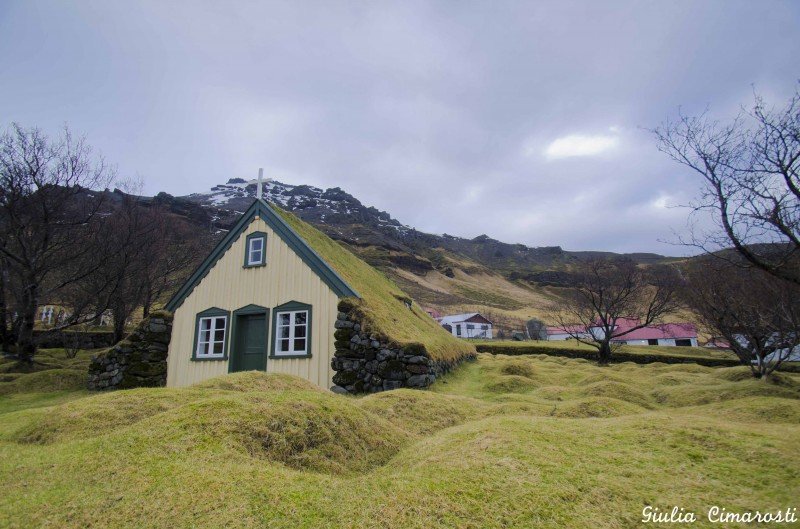 Hofskirkja, and those “bumps” are the graves

I’m sure you’ve heard of Eyjafjallajökull. This Glacier Volcano erupted in 2010 with great consequences all over the world. Remember when no plane could fly because of volcano ash in the atmosphere? Here it is, as innocent as it may look. And this is on the South Coast of Iceland too. Its ash is still around… 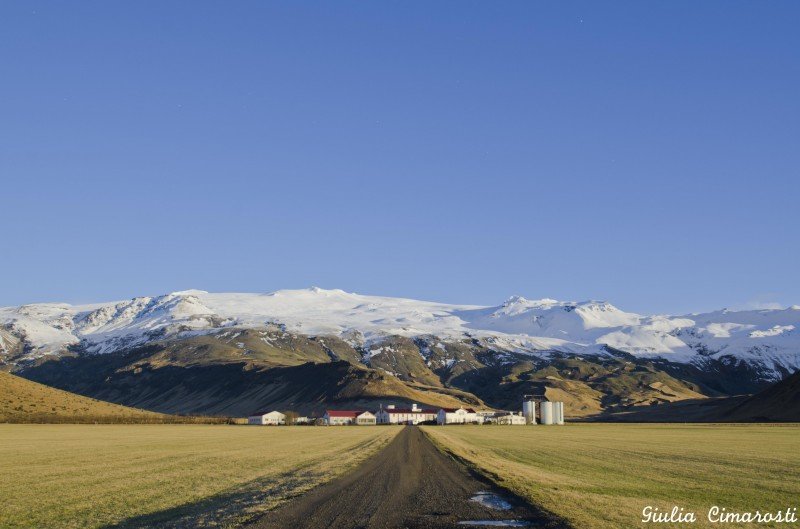 Another famous place we drove through that day is Vík, with its Reynisdrangar rock formations. In the meantime, the long Icelandic winter sunset had started, but the light was still enough to take some photos. 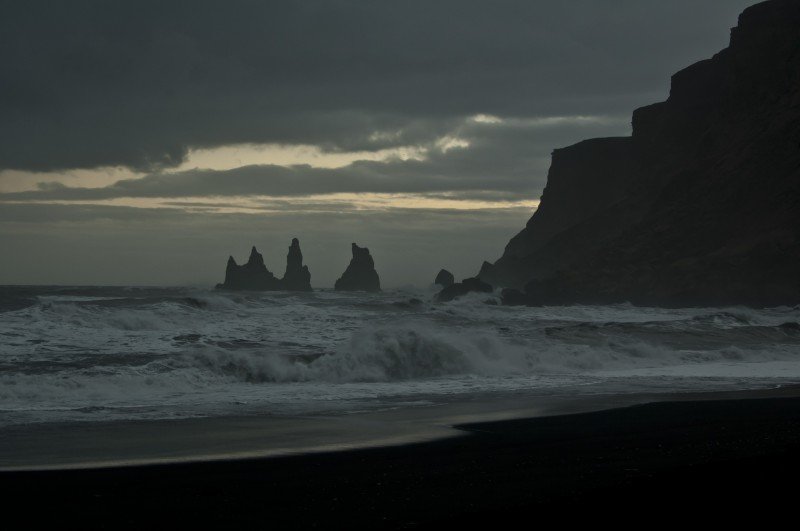 That was not all. Two of the most famous waterfalls of Iceland were on our way too: Skógafoss and Seljalandsfoss. The light was almost gone, but I am happy that I got there when tourists were not around. I knew I was going to be back to these waterfalls in the following days on tours, but not after sunset. The waterfalls are lit up during the night, so it’s possible to visit them, and it’s definitely a beautiful sight. 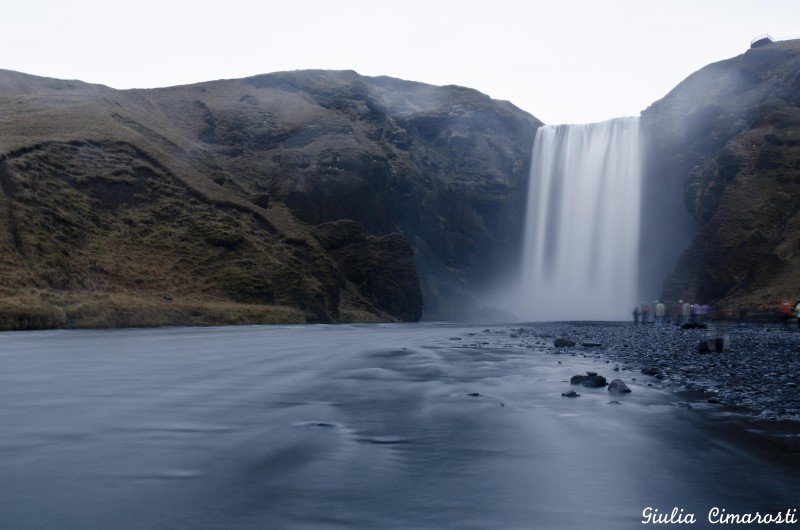 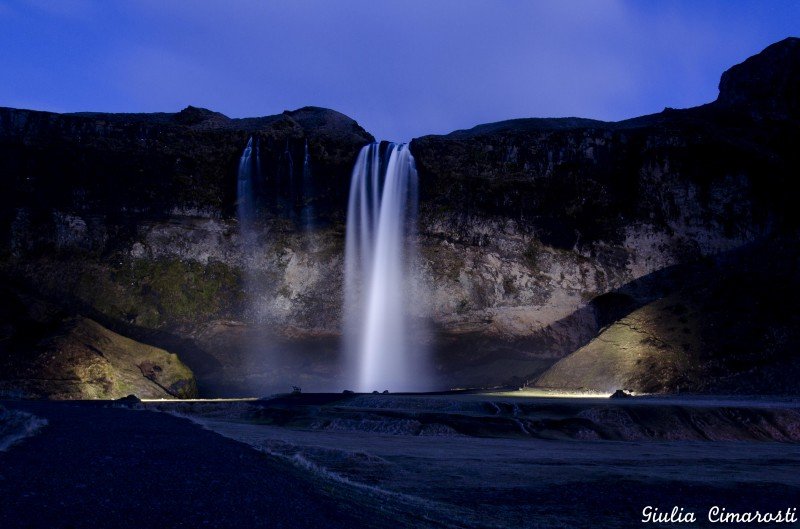 The sunset was beautiful. On our left side we could see the Vestmannaeyjar (Westman Islands) perfectly reflected on the ocean. I really want to go there one day.

We stopped on the way to have dinner. We were not far from Reykjavik at all. I thought my day was over. But one last surprise was waiting for me… my first Northern Lights!

As soon as we got out of the restaurant, we went back to the car and headed west. At some point I heard Arnar, one of the guys on the car, saying “here’s the Aurora!” and I was all like “where? WHERE?”. He showed me. We took a side road looking for the dark, and stopped to take some photos. 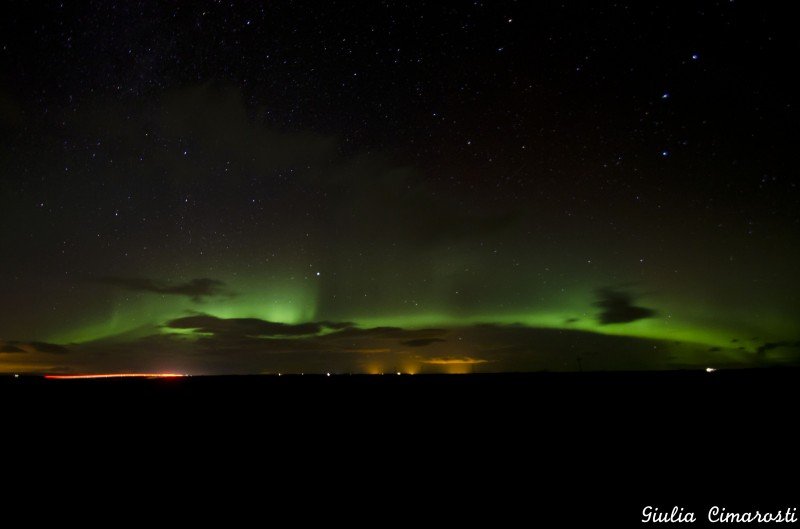 My first Northern Lights… I will never forget that moment!

This may not be the greatest aurora in the world, but for me it was the first “real one”, and I felt tears in my eyes! What a surprise. It was 9pm. From what I heard, the Northern Lights were visible from midnight to 2am, but I started to realize that there’s no rule.

This was a happy day and the Aurora was just the perfect ending.

Please note: this trip took place on February, on a sunny day. Just 3 days before the same road was not accessible due to heavy snow and icy road. Always check the road conditions and weather forecasts before driving in Iceland during the winter!

Great pics, my dear friend! And a little bit of envy for your wonderful trip!

How are the couchsurfing opportunities in Iceland?

Hi AJ, I haven’t tried couchsurfing in Iceland (but I stayed at locals’ places as I will explain in an upcoming post), but I checked the CS website and there are opportunities there too. The only thing is that apart from the main cities, there are very few inhabited places in Iceland compared to its surface, so sometimes farm stays or hostels are the only option.
But for Reykjavik and Akureyri I’m pretty sure you’ll be fine!

[…] waterfall, that I was so lucky to see by night as well on my Southern Iceland road trip, is a very famous one where you can walk behind the waterfall itself in a natural tunnel. I […]

[…] see if you can join someone. I did get a ride all the way back to Reykjavik from Höfn, and it was an amazingly beautiful day! Driving on the Southern Coast of […]

[…] safe. It’s incredible how safe Iceland is. I remember one night I was on the way to Reykjavik with a group of photographers, and we stopped on the way to have dinner. They all left their very expensive camera equipment in […]

These photos are stunning. We’re going to Iceland in January and will be travelling along this coast road, with a local guide who has an a monster jeep.

I’m getting more and more excited about going by the minute!