Graffiti in the West Bank: the Separation Wall, Banksy and more

Every city of the world has its own graffiti (except maybe Singapore?) and I’m a big fan of this form of art. Sometimes though, the beauty of graffiti and street art in general is not in what is depicted itself, but rather in the meaning it represents.

In the West Bank, the controversial so called “Separation Wall” (also called “Security Wall” but I don’t like this one) is the perfect and logical surface for activists, pacifists and artists from all over the world to draw a beautiful and meaningful mural, or even just to leave a message. 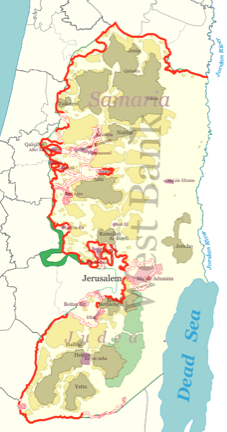 The Separation Wall in the West Bank, Palestine – By Ynhockey, via Wikimedia Commons

Wherever there’s politics, there are writings on walls, and this is a fact. International graffiti artists such as the worldwide famous Banksy come to the Palestinian territories (the West Bank and the Gaza Strip) to leave their message through their paintings, and this is really the case when a picture tells more than a thousand words.

Pictures have the power to convey a whole feeling, a whole story, in a universal language that doesn’t need any translation or explanation. 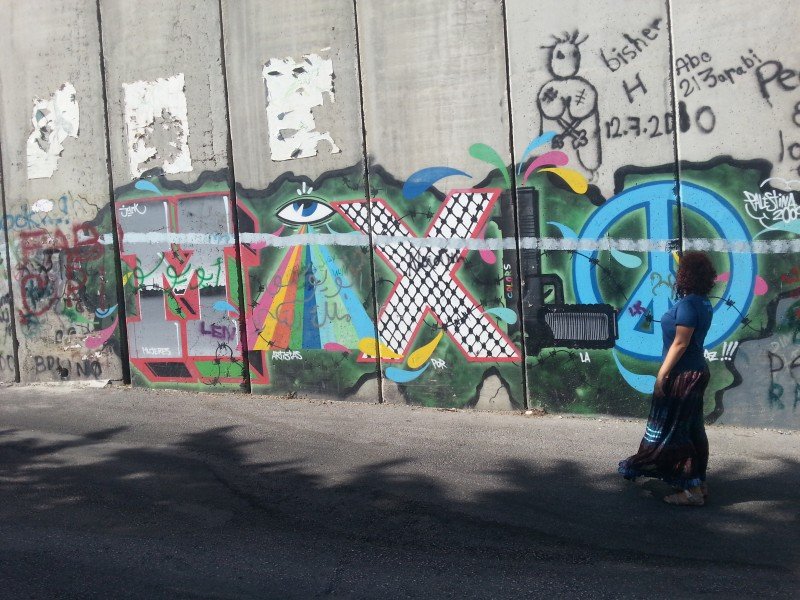 Me and the separation wall in Bethlehem, Palestine

On my “Best of the West Bank” tour with Abraham Tours I had the chance of seeing and photographing many interesting and poignant examples of political graffiti that I am now going to show you, hoping you will take a minute to think over them and hopefully feel something out of them.

Well I guess I ‘spoke’ too much. Here you are.

Jerusalem beyond the wall, depicted as if the wall was fallen down, on the Separation Wall in Bethlehem. 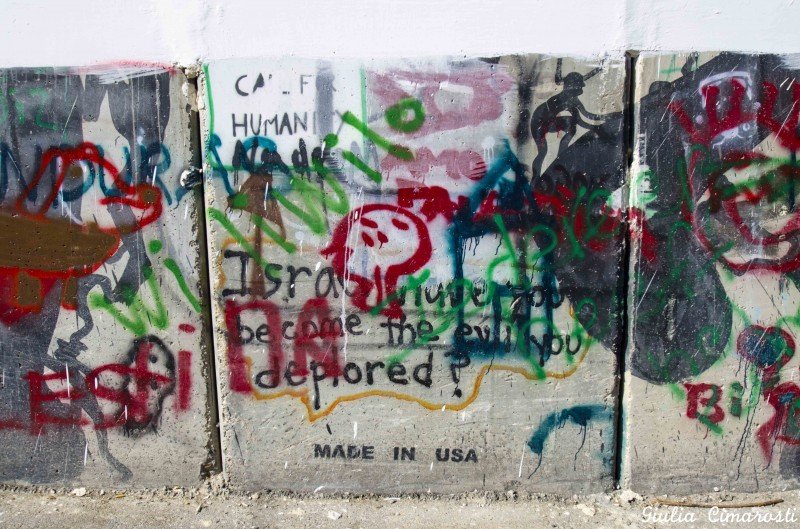 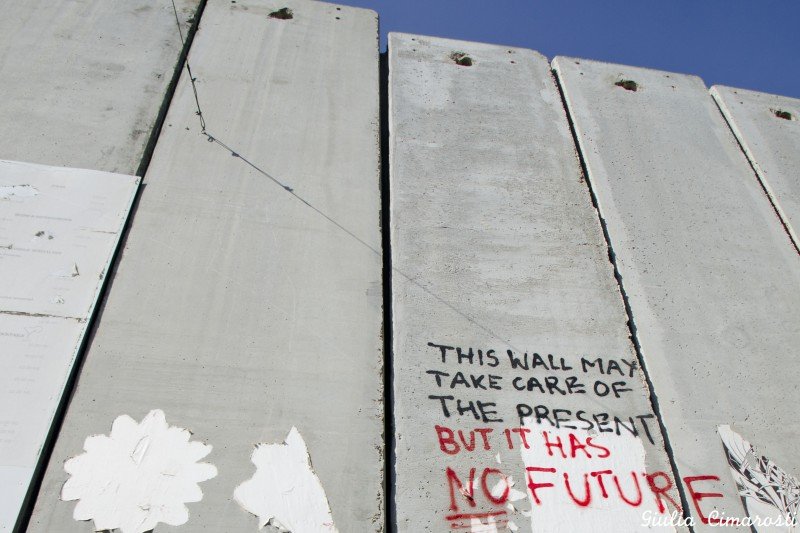 “This wall may take care of the present, but it has no future” 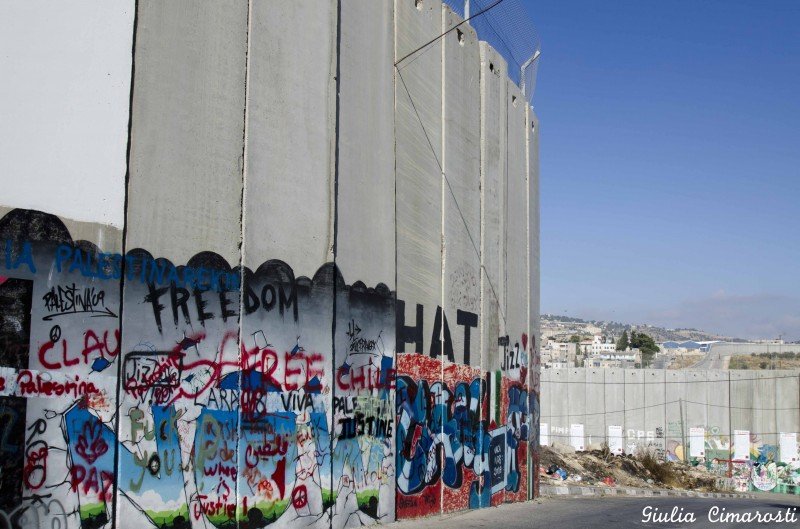 The wall goes on and on and on… can you see the end? 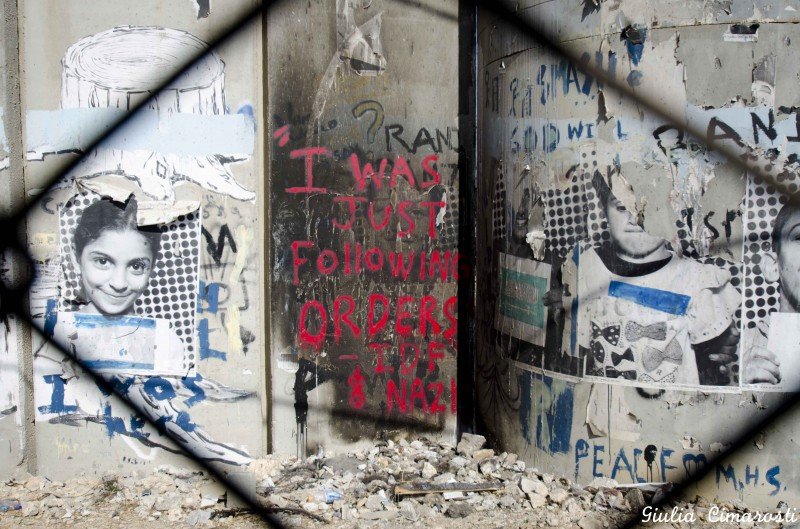 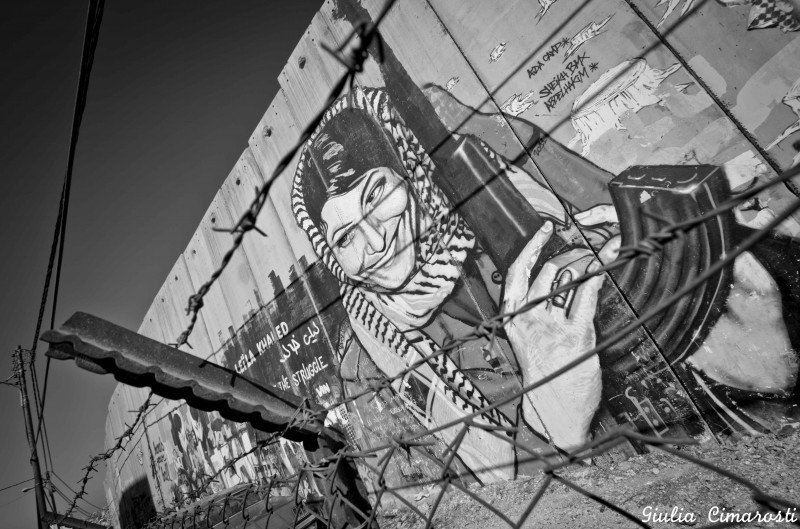 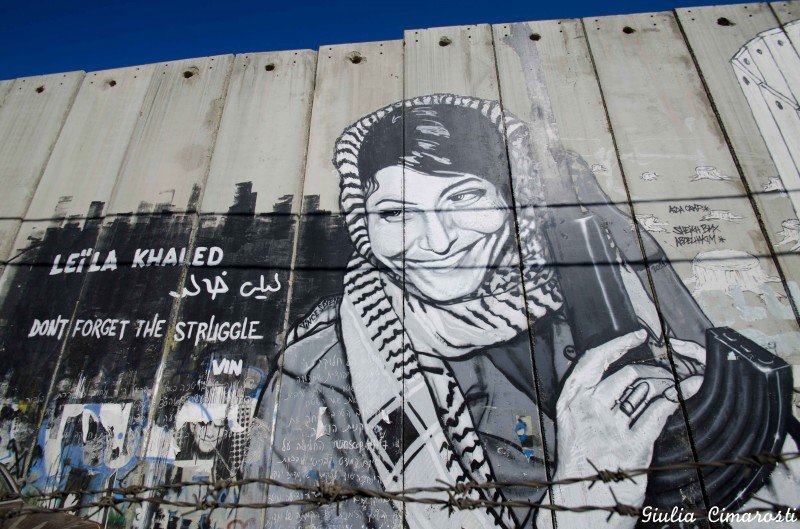 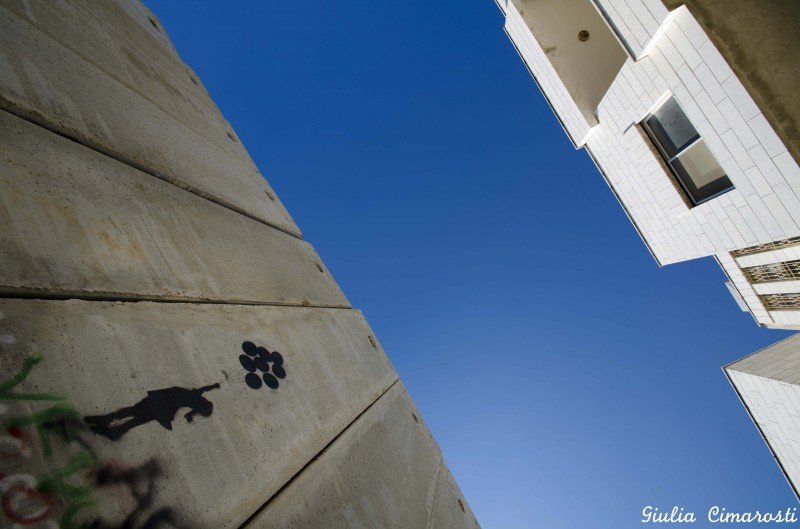 The girl with balloons is said to be by Banksy but it’s not for sure. Either way it’s incredible how such a simple drawing can express a specific feeling: the dream of crossing that wall… or even better, that the wall wouldn’t even exist! 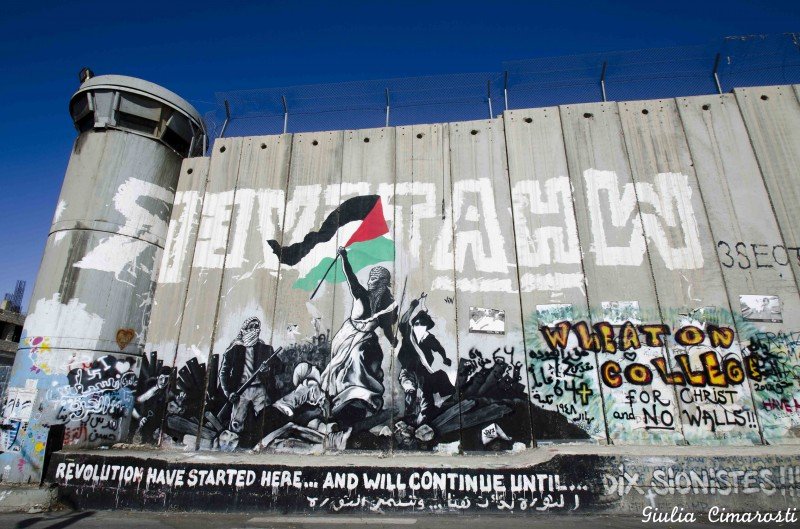 One of the most famous and biggest graffiti on the Separation Wall of Bethlehem, representing the revolution with an interesting and clear reference to Delacroix’s painting “Liberty leading the people”. 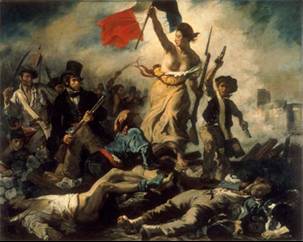 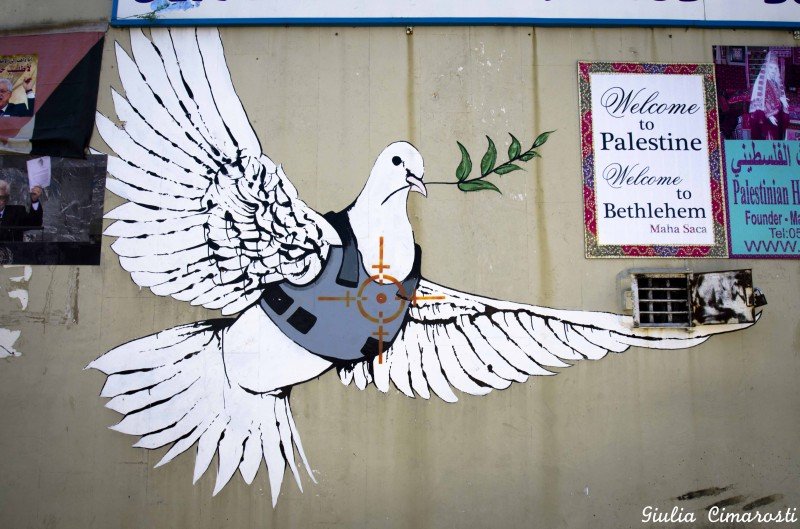 Another great one by Banksy. The peace dove welcomes visitors to Bethlehem… with a bulletproof vest. Because peace is constantly threatened. 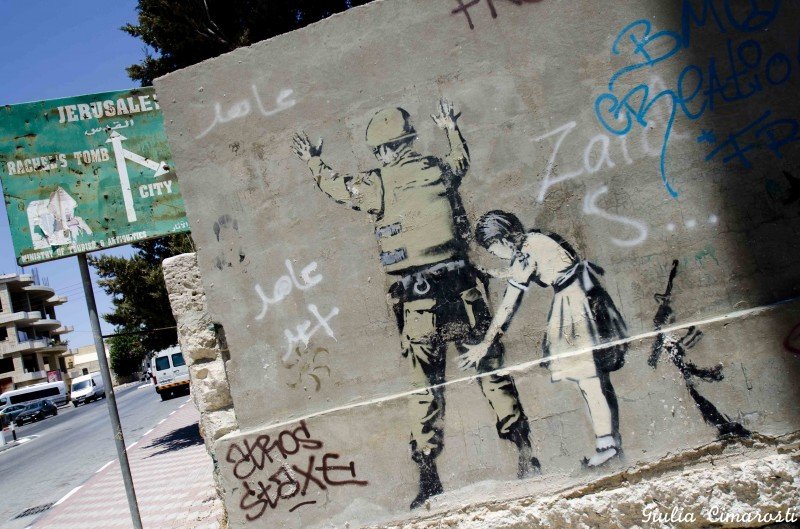 This my be one of the most iconic drawings by Banksy: the “girl frisking a soldier” is an ironic graffiti on a wall in the middle of Bethlehem. 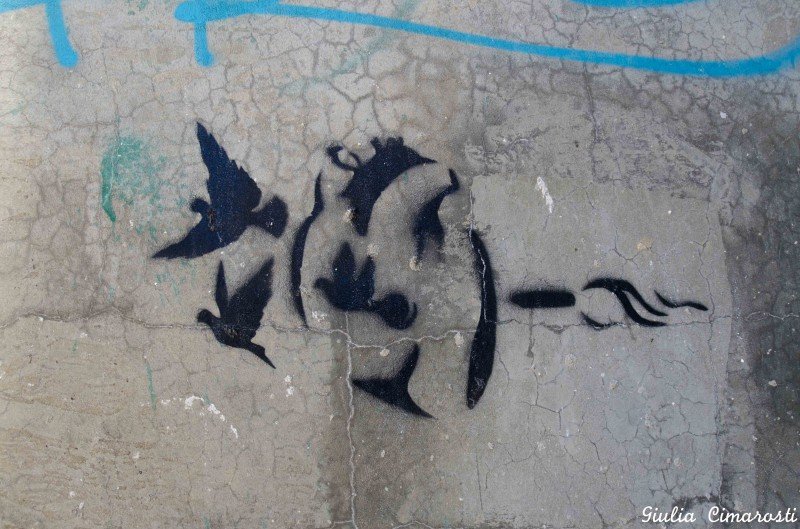 In this simple mural, Banksy depicted a heart with peace doves, with a bullet on the way to hit it. I am not sure I understood the exact meaning of this one (please help leaving a comment below if you can interpret it!) but I have the feeling it’s pretty powerful. 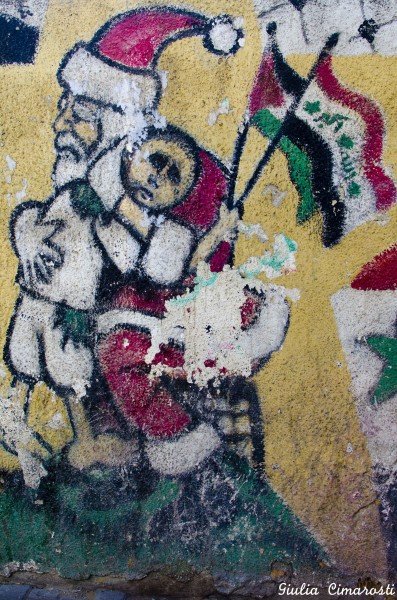 On one of the main streets of Ramallah, the capital of Palestine, I spotted this drawing and found it simply heartbreaking. Santa is hugging a sad child who’s holding the Palestinian and Iraqi flags: he represents those children who grew up in war conditions and don’t know the serenity that every child on Earth has to right to experience. 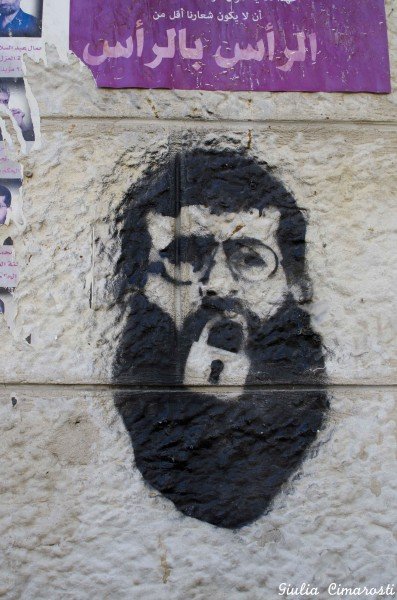 The man in this drawing is named Khader Adnan and he was imprisoned by the Israeli military without any reason. In jail he suffered from physical and psychological abuse, and was on hunger strike for about 60 days (!!!) as a sign of protest against injustices. This case attracted the attention of international medias and Adnan was finally released.

Going through these drawings once again was a real emotional journey.
I hope it was the same for you.

What else can I say… Peace! Salam! Shalom!

You know I love STREET ART and this wall is one of the walls I so wanna see in my life. I’m so jealous, but am sure I will visit it soon. The BANKSY is priceless… he is a genius. I like them all, but the MADE IN THE USA is wow… so damn true! Nice photos. I’m excited to go to Cairo & see the new street art around.

I want to go back and see more! We also spotted the famous “man throwing flowers” drawing by Banksy (which is huge!) but while on the van, so I couldn’t take photos. Banksy is really genius, I love all his work!
The new graffiti in Cairo are also really cool, will be waiting for your take on them. :)

I loved seeing the artwork on the Separation Wall. When I first went to Israel in ’08 I hired a Palestinian guide to take me to Bethlehem and Jericho, and he was driving me right past the wall with its artwork, without saying anything about it or stopping the car! I don’t know why he was was just speeding past this stuff. Maybe because he was in a hurry to get on with the rest of the tour. I’d never heard of the art on the wall at that point and when I saw the dove with the bulletproof vest I told him to stop the car. That painting is so striking and turned out to be my absolute favorite work of art on the wall. I would like to take a long walk along the wall to check out the paintings up close and slowly.

Me too! Next time I go I will make sure I have enough time to look at the paintings and look for other great ones. This was a pretty quick visit but I am happy with what I saw for now. Let’s go back together, hehe :)

Hi, Street art is fascinating and there some images here I’ve not seen before.

There’s a wonderful project in The Gambia that brought street artists to a village. They painted on trees and the walls of the houses there. I’ve not seen it for myself but hope to on my next visit. Here’s a link to a great video if you’d like to check it out http://www.thegambiablog.co.uk/2011/03/wide-open-walls-at-kubuneh/

That’s a really great one… along with Ms Khaled’s story itself! So puzzling.

A Cook Not Mad (Nat) Reply

Very nice, thanks for capturing and sharing them.

It’s great to see this street art. It certainly is a lot more powerful than some from around the world. I particularly love Banksy’s peace dove.

Hi Jenny! Yes, the dove is definitely very powerful, I love that one.

The question is not the street art or the wall like this, but the people behind ?

And the stories behind, I would say!

Hi Ofer, when you bother to leave an email that is not fake, I will bother to elaborate a reply.
In the meantime, you can keep bombing Palestinians, because obviously ALL of them are terrorists… so that they feel exactly what you feel. Way to go :)

Hi Ofer, I think one needs to be really uninformed to believe what you wrote here. Why do you lie and hide behind the reality and truth. I am pretty sure that lying in any religion is wrong. Even one that doesn’t believe in god knows that. Wake up and see how many of those poor kids that you call terrorist are dying because of the non terrorist people living next door. Shame

Hey, my name is Adrianna. Thanks for this. I’m studying history of art. I’m writing my terms’s work about graffiti on this wall and your post really help me! Kisses from Poland!
A.

Hi Adrianna, good luck with your work:) If you include some of these photos, I would be happy to see the dissertation. Ciao! G

Hi Adrianna, I am also a student studying Masters of Fine arts. my Thesis topic is on Borders, Walls and dole standards. This wall is the reason for my topic. Please leave me a message if you would like to collaborate. Best.

Hello Adriana,
I am an IB student who is trying to write and essay on this subject and Im finding it really hard to find someone professional in the field of arts and specifically political art and graffiti.. Can you help me in any way?

I have heard it can be pretty dangerous there. Did you take any precautions while traveling around?

No particular precaution, there are many tourists around, I felt safe all the time.

I loved my visit to Palestine! And the wall was one of my first things I wanted to see!

There’s so much art on the wall. Do kids just go up to the wall and paint or do they risk getting caught by the Israeli people??

whoah this weblog is excellent i really like reading your articles.
Keep up the great work! You know, a lot of individuals are searching around for this information, you can help them greatly.

This is a topic which is close to my heart…
Take care! Where are your contact details though?

I love it when folks come together and share thoughts. Great site, continue the good work!

Montreal street art. Hands down, the best ever Reply

[…] really rarely that I stopped and took photos of street art during my travels (except of course in Bethlehem, with Banksy and all), but this time I was immediately hooked. And so I took my camera(s) and went […]

[…] Palestine.  The pictures used in this post were taken by other travellers:  Travels of Adam:  Travel Reportage and Aaron’s Worldwide […]

Banksy really did start something over there. Some very controversial pieces indeed, really unique and I expect that we will see a lot more such artwork in time to come. Thanks for the photos as previously I had only seen the pics thrown up by the popular news sites/papers.

You have done a fantastic job.

Julia, do you know exactly where in the separation wall is Leila Khaled´s graffiti?

It was in the first part of the separation wall after the checkpoint, not far from Hebron Road. But the exact place unfortunately I don’t remember: this was more than 4 years ago. Time to go back I guess…

Re the question about children being able to go up to the wall and paint. I believe the images are only on the Palestinian side, and with a thick 8 metre (25 ft) wall which is unscaleable, I guess paint is not a big worry for Isaeli soldiers That is not the case in other areas where settlers are taking over land illegally and because they feel threatened, feel the need for protection from soldiers.