The mosaics of Pafos in Cyprus

Sitting at a table with a view on the Fig Tree Bay of Protaras, on my first day in Cyprus, I scribbled on my notebook:

What I already realized is that I won’t be able to see everything I planned. There’s so much culture and history here. Just looking at the map now I found out about some Neolithic settlements nearby – I want to see it all but I can’t! Shall I add Cyprus to my “Countries to go back” list? I guess so…

It was very clear since the beginning that I underestimated this island. I thought this was going to be the “easy” country of my Middle East trip, and I was wrong! I barely had time for a swim twice in a week, there’s so much to see and no way to be disappointed.

When I arrived to Pafos, on the southern coast of Cyprus, I had the chance of visiting the Roman mosaics. Funny because we have plenty of them in Italy, but I never actually saw any. And I missed out! I wouldn’t be writing this post if I weren’t so impressed.

The so called “Paphos Archeological Park” includes several ancient Roman villas but the one I am about to write is “The House of Dionysos”, the Greek god of wine.

Among the various characters and legends behind them, you will find very interesting topics such as incestuous love, homosexuality and possibly political and religious symbols.

While you go through these photos, keep in mind that these mosaics are dated back to the 2nd century AD. How cool/impressive/you name it is this? Also, the Greek mythology is incredibly fascinating. 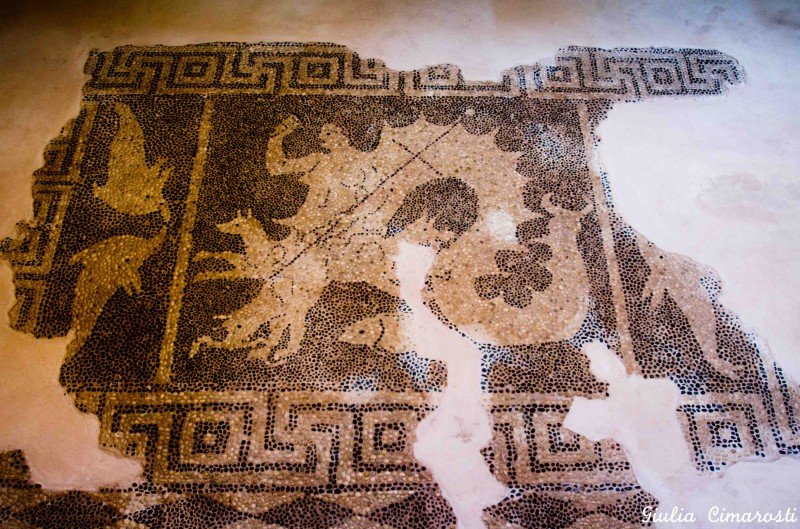 Myth of Scylla and whirlpool Charybdis

Scylla and Charybdis, as per many legends, were monsters in the Messina strait (Sicily) that ate every ship that approached the harbor. They are even mentioned in the Odyssey as monsters with a dog’s body and a woman’s head. 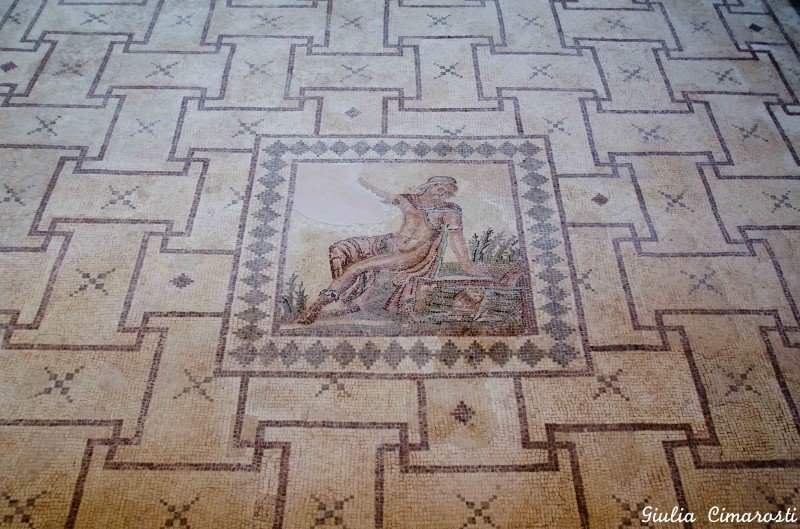 Narcissus was a beautiful guy. He looked so good that everyone instantly fell in love with him at first sight, including men, women, old people. He was so overconfident that he refused all his admirers, hurting their feelings. The Gods punished him by letting him fall in love with his reflection in a pond, so that Narcissus let himself die from despair of the impossibility of such relationship. 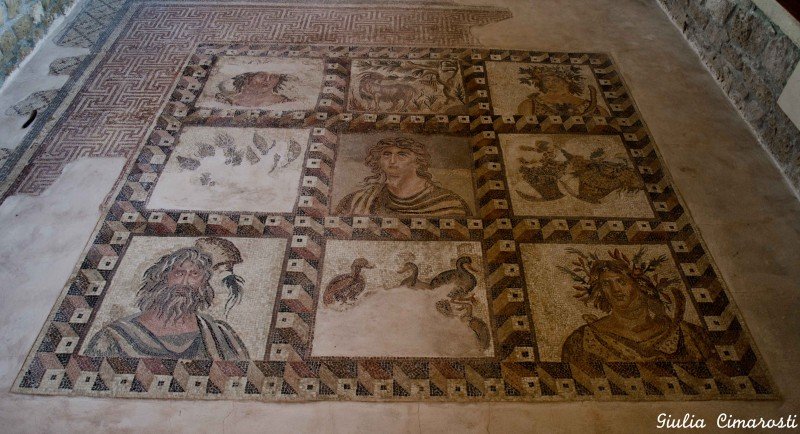 This beautiful mosaic portraits the four seasons, with Gea (Mother Earth) in the middle. All the characters are females except the Winter (bottom left) who is the only male one. 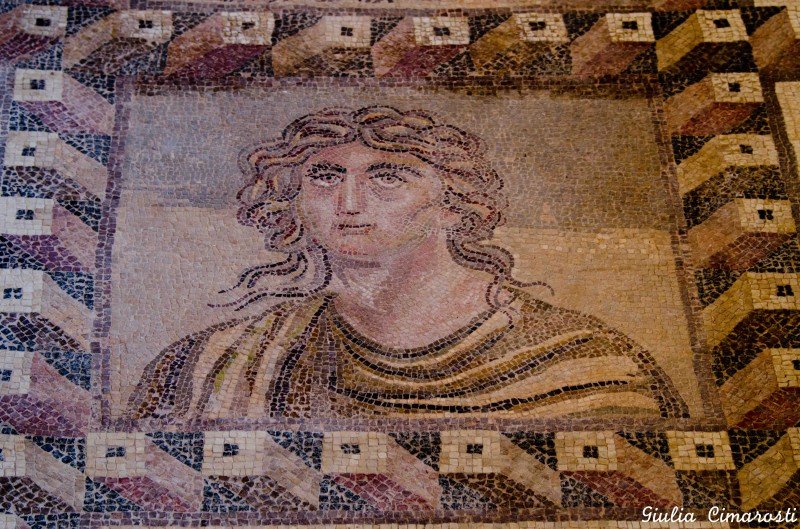 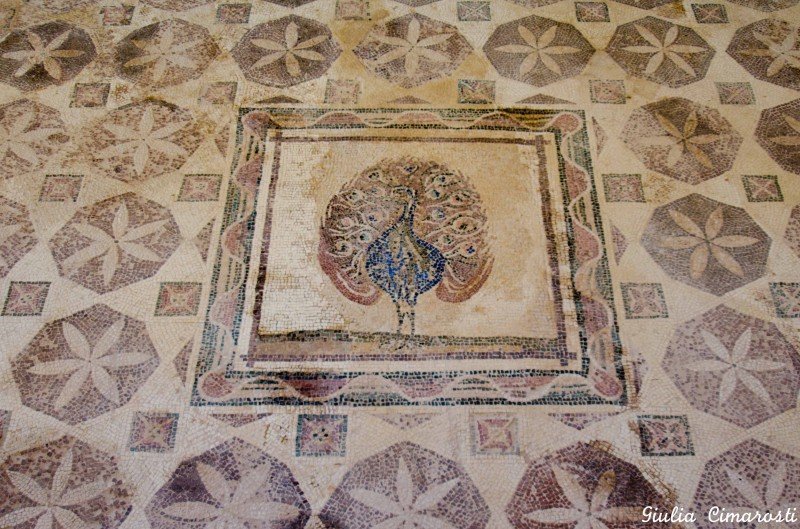 There’s no legend behind this figure, but the peacock is a symbol of abundance. If the colors are this beautiful nowadays, can you imagine how they must have looked more than 2000 years ago? 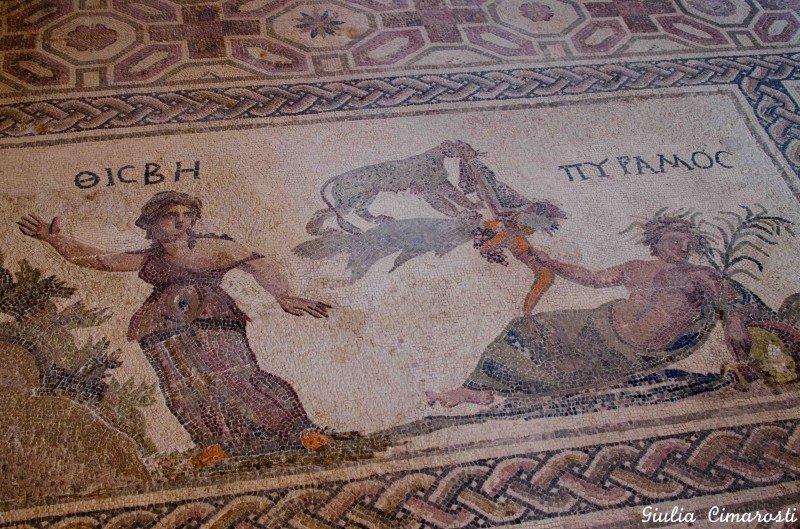 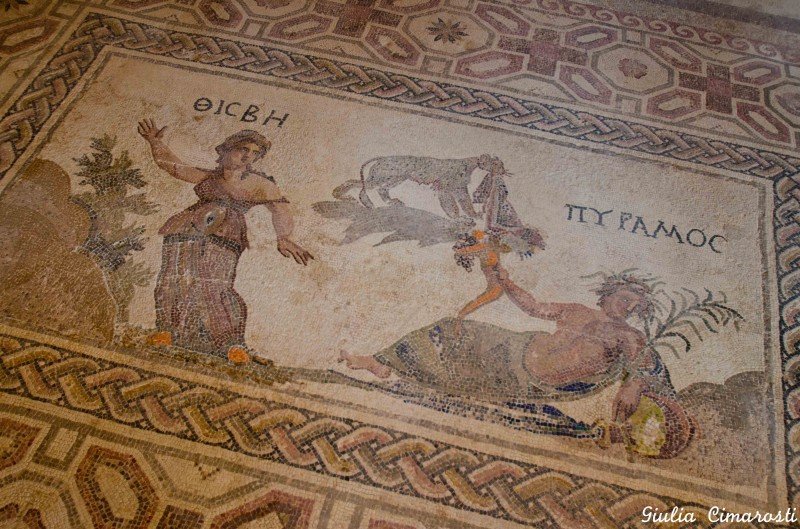 The story of Pyramus and Thisbe is said to have inspired Shakespeare who wrote “A midsummer night’s dream” and “Romeo and Juliet” with the characters above in mind. These two lovers were supposed to meet in the forest. Thisbe arrived first and ran away after seeing a tiger, but left behind her scarf. When Pyramus arrived and saw the scarf, stained in blood by the tiger who had just killed a prey, thought Thisbe was dead and killed himself with his sword. When Thisbe came back she found him dead and killed herself too wit the same sword.

Ikarios, the king of Athens, gave hospitality to Dionysos, who shows him how to make wine. Ikarios was delighted by this new delicious drink and started offering wine to the population. Two shepherds drank too much and felt dizzy, suspected they were given poison, and killed King Ikarios. On the mosaic, the two shepherds are described as “the first wine drinkers”. (Not sure if the moral here is not to drink, or rather not to offer your wine to anyone that won’t appreciate!)

Poseidon (the God of the Sea) and Amymone (a nymph) were in love, and this is made clear by the Cupid in the middle. 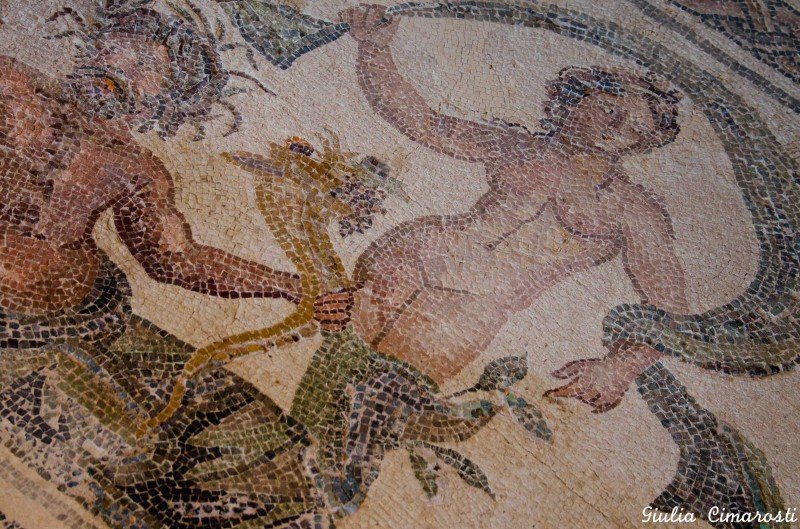 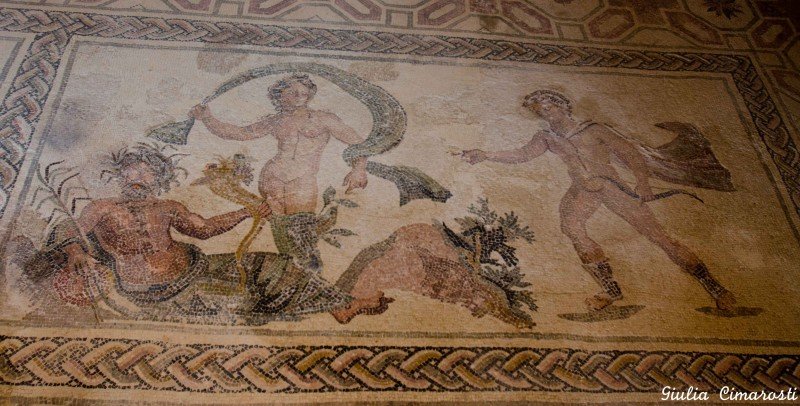 Apollo was madly in love with Daphne, but she kept refusing him. Her father, Peneus, wished she would get married and give him grandsons, but she kept escaping from Apollo. When Cupid decided to help Apollo by shooting one of his arrows to Daphne, she asked her father to help her. Peneus turned her into a plant so that she could never get married. In the mosaic you can see the moment in which Daphne’s body starts changing into a tree. 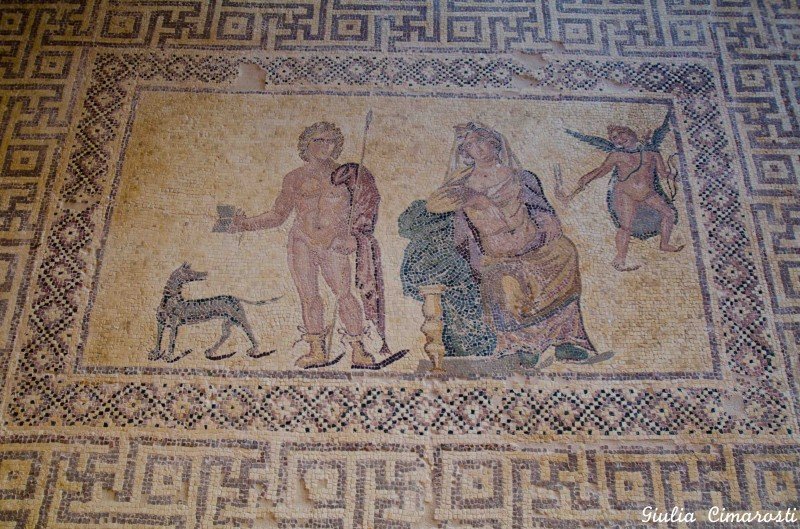 Theseus went into the labyrinth yo kill the Minotaur. Ariadne helped him getting out of the labyrinth thanks to the so called “Ariadne’s thread”. They escaped to Cyprus together, and Ariadne died while giving birth to Hippolytus. Theseus then married Phaedra, Ariadne’s sister. Phaedra fell in love with Hippolytus. This mosaic represents Hippolytus and Phaedra, who is sad because he doesn’t love her back. 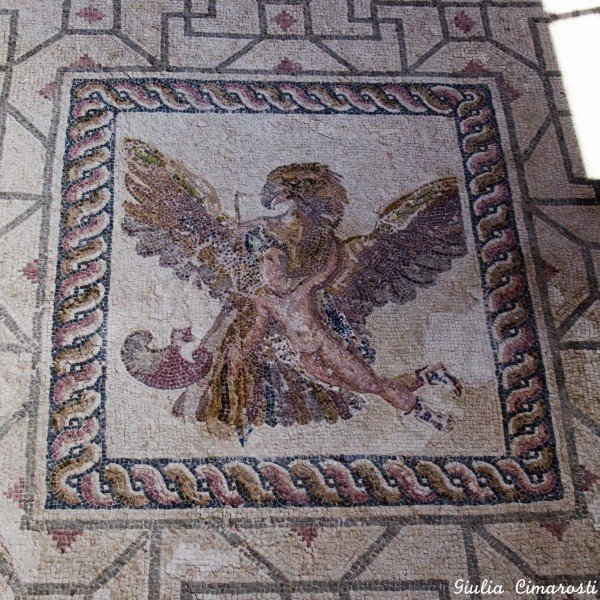 Zeus, the king and father of all gods, was fascinated by the beauty of Ganymede and kidnapped him giving his father two holy horses and a vinestock in change. In order to kidnap Ganymede, Zeus turned into an eagle, grabbed him and took him on Mount Olympus where they became lovers. In the mosaic Zeus is the eagle and he’s taking Ganymede away with him.

Last but not least: interesting decorations 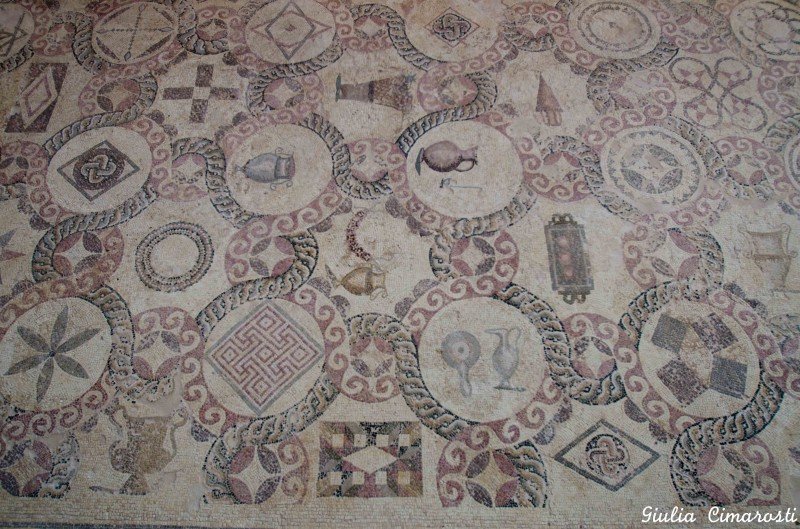 Some mosaics don’t necessarily represent mythological figures, but as you can see from the photo above there are beautiful decorations too. Pictures of food and abundance in general alternate with geometrical decorations… some of which are really interesting! Can you spot anything strange? 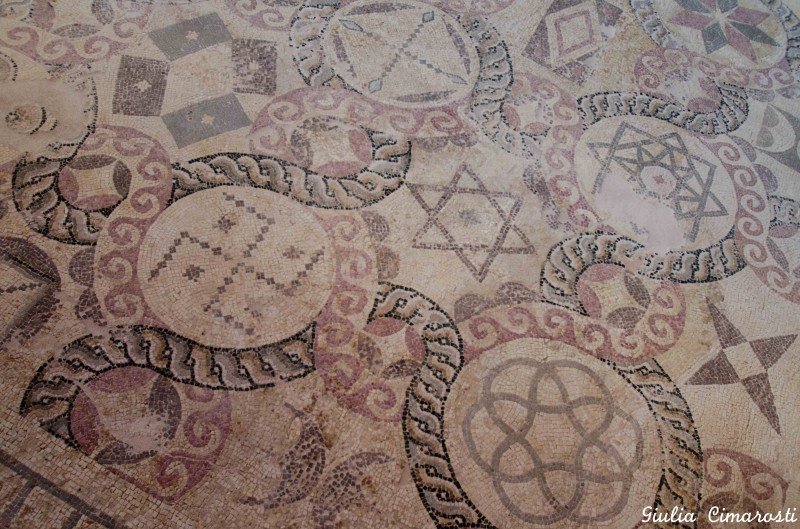 Interesting symbols in the Pafos mosaics: a swastika and a star of David… next to each other?

When the guide first showed me these symbols, I really didn’t know what to think: a swastika and a star of David… close to each other? That looked too weird. But I was explained that back then and in this area of the world, these were simply geometrical decorations without any meaning. Incredible how a symbol can convey a feeling and a precise meaning, even if after all it’s “just a symbol”!

Have you been to Pafos, and did you visit the Archeological Park? What are your favorite mosaics? I loved these ones and can’t wait to see more!

Love them too! I wonder how amazing these villas must have looked like back then, if JUST the pavement was so beautiful.

Ciao Bella
Giulia your articles about Cyprus as well as your fotos are amazing.Thanks for promoting Cyprus.It was nice meeting you
Merry Christmas and HAPPY NEW YEAR
A PRESTO
Michael Neoptolemos
your guide in Pafos

Ciao Neoptolemos!!! So nice to hear from you. I am glad you enjoyed the post!
I hope to see you again in Cyprus soon.
Thanks for your help, and keep up the great work!
G

I totally agree with you, I’ve moved out to paphos from the UK and thought the same thing but there really is so much rich culture and history over here, I love it!

A great post, your pictures really do the mosaics justice.
Paphos is a beautiful place, there is a lot to offer in Paphos, from the history and archeological sites to the beautiful beaches.
It’s no wonder that a lot of people are considering buying a property in wonderful Cyprus: the weather is brilliant all year round and there is so much to do and a lot of opportunities.

Those are incredible rugs. Never seen something that nice. How much were they selling for in $US

Do you mind if I quote a few of your posts as long as I provide credit
and sources back to your site? My blog site is in the
very same niche as yours and my users would really benefit from some of the information
you present here. Please let me know if this okay with you.

Sure, but send me an email to [email protected] with the links once you post it.

Do you mind if I use a couple of images and maybe a paragraph or two of text and post it to my blog?

with credit given to you and your website of course.

Sure Raphael, as long as you give me credit!

‘IN THIS SIGN CONQUER’ the Great Pyramid and the Sacred Cut by Tons Brunés leads us to Nikola Tesla, Peter Plichta, Crichton E.M. Miller, Tudor Parfitt, String Theory, the Philosopher’s Stone and the Ark of the Covenant | Science and Re Reply

Well, most people here either are pretty dumb or just skipped over it, but that “swastika” is definitely not a swastika. When the pegs are facing counter clockwise it is a buddhist symbol for peace.

For everybody here That is Swastika and it is one of the oldest simbhols on this world and it was simbhol with meaning not just “decoration”. Swastika on sanscrit mean “i wish you good luck”. “David star” also very old simbhol, Jewish began to use it as a simbhol of their nation just in 17 century.
Before posting something, you can first little bit make research in internet, it is not difficult.

Cyprus is just amazing, it has so much history. It really hard to see everything you’d like to in one trip.

I love your website, I’ve been browsing it for hours now :-)

Keep up the excellent work!
Jamie