Petra by night, joy for the soul

There are places in the world that have the power of giving each one of us a singular emotion, a personal experience and a shot in the arm to anyone.
It doesn’t matter how many times you saw it on websites, magazines or postcards. Petra is waiting for you to surprise you.
A million times I read the same, similar words by different travelers, something that goes like “you walk in the Siq, and just when you start thinking there’s no end, you suddenly see the Treasury and your jaw drops”. And I was all like “yeah yeah yeah, I heard the story before. Petra? Of course I am going but I am sure it’s overrated, I won’t feel anything like that“.

And then my time to meet Petra came.

The first encounter didn’t occur in a classic way, and I am happy about it.

After a long journey from Amman, through Madaba, Mount Nebo, the Dead Sea and a long road up to Wadi Mousa, I felt dirty and exhausted, but I couldn’t wait to venture myself into Petra. After all, the Petra by Night experience is not that physically demanding. And so I went.

It was dark and I couldn’t see much.
Now, assuming that some of you haven’t been there before, I will try and explain you how it looks like.

First of all, the Sik doesn’t start right away. Before reaching it you have to walk down a path for a while first, guided by candles on its sides. As you walk down and your eyes get used to the darkness, you will start discerning majestic structures – a facade, then pillars – in the darkness, on your left and right. That’s when it gets real. You are in Petra. 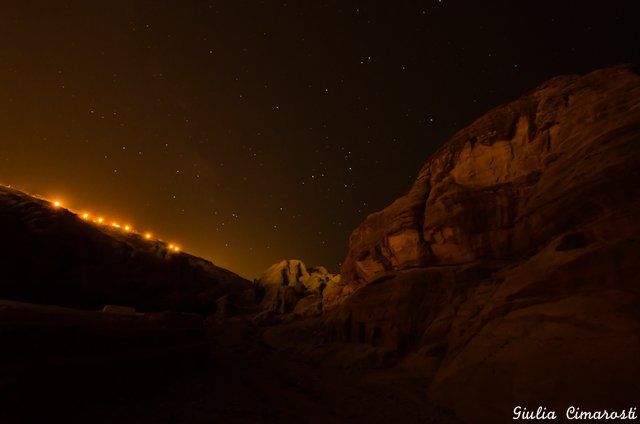 Walking in the Sik at night is not easy. Candles help finding the way but the pavement is partly the original one with big, irregular stones, and partly sand.
Slowly I walked down the way, trying to stick with the group, but also not in a rush, excited about seeing the Treasury for the first time, but taking all the time to reach it not to spoil the special moment. ‘What if it disappoints me?’ -I kept asking myself.

Not that I could see much, but I could guess the typical red color of the rocks on my sides. And I never thought the faces of the Sik were so high. As if I didn’t feel small enough, the patch of black sky I could see when I raised my gaze showed a million glowing stars. This is the kind of feeling I love. 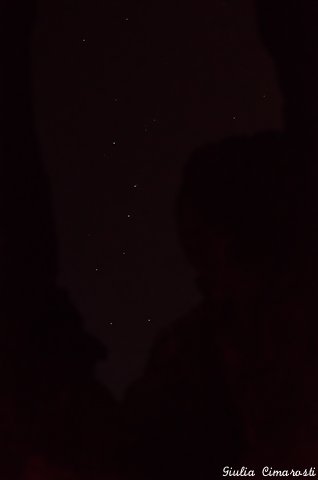 I felt the urge to touch the stone on my sides, and take in a portion of its energy. Maybe, 2000 years ago, a Nabataean touched the same stone while looking at the same star.

And down I walked. From all the previous reads I had about Petra, I expected the Sik to be endless, and I guess that’s why it didn’t look that long to me.
Also, I thought I would start glimpsing the Treasury from a distance, but in fact when you see it you’re practically arrived.

At every turn of the canyon I reverently looked up to see if the Treasury was there. When it wasn’t, I was secretly happy to make the discovery last a couple of extra minutes. I felt like a child that opens a present, and takes his time ripping the wrap paper not to spoil the surprise.

This was MY Petra, and I wanted the moment to be special. Millions of people flock to this same place every year, but everyone has a personal feeling about it. I was so looking forward to find out what mine was going to be.

And finally I saw it, and it was a punch in my heart. Yes, I can’t find any better way to describe it. I felt a physical punch in my heart, and I rejoiced and felt my eyes getting watery. The Treasury, there it was. Same thing I saw on a million postcards, but now real and unbelievably beautiful.
As I got closer, I felt like flying. I was so happy. 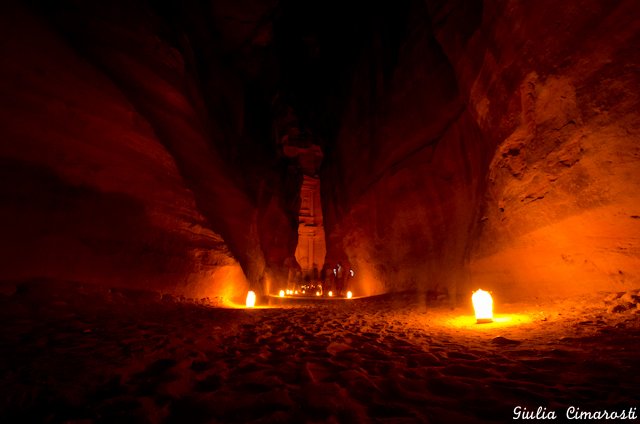 I was slightly late, and the show was already started… which was good because everyone was sitting already and I could enjoy the views as a spectator of the spectators.
Darkness all around, a long way across the Sik between you and the closest village, hundreds of candles in front of the Treasury and a million stars above, while a Beduin plays a mesmerizing music with his flute. I don’t know if anything can get more spiritual than this… 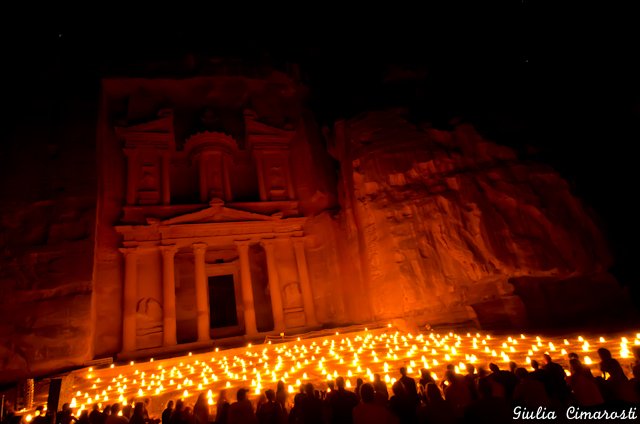 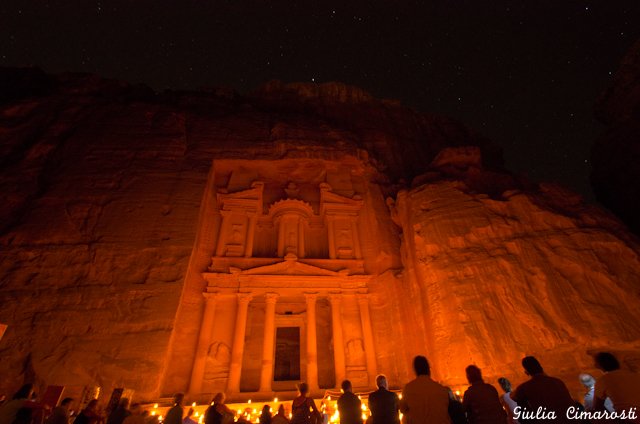 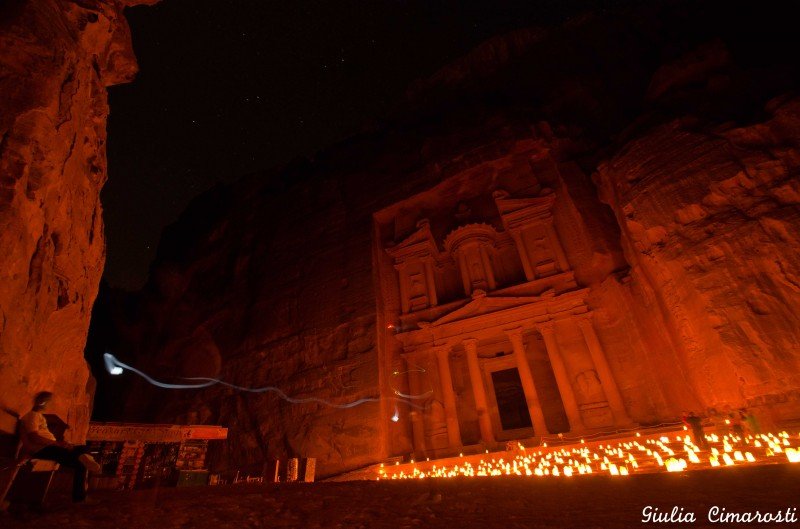 I was late on the way down, and I was the last one to leave, now feeling more confident about walking the Sik on my own.
My heart was jubilant. My soul was pleased.

What a perfect first encounter with Petra I had, and that was not all. I had 2 more days to spend there, and I was more excited than ever.

‘Goodbye, until tomorrow’, I whispered.

I did not hear or read like such a description.
even in the description ….You are amazing

This is a beautiful post, Giulia. Your description of the walk to the Treasury is so detailed it really gives an excellent feel of being right there with you. Your photos – especially those with stars in them – are awesome.

Petra is an amazing place that everyone in the world should visit. In my opinion, the most striking, unbelievable aspect of this mountain city is that after everyone vacated it, they forgot about it! How do you forget about a place like this?

Thanks Sabina!
I can’t believe this place was abandoned and forgotten. Seriously!
The beauty of Petra is something that goes beyond words. I have to go back to remind myself it’s real and it wasn’t just a dream… It’s like travelling back in time. Loved it!
Thanks again for all your tips and support during my trip across the Middle East <3

What a beautiful description of your visit in Petra… Yes, you are right, there are so many times I have read something about Petra and the walk to the treasury yet, you really captured my heart with this. You have every details, that makes me feel like I am already there. I can feel the overwhelming feelings that you feel right there. This is one of my goals, to come and visit Petra.

Overwhelming feeling indeed… so happy to hear you felt the magic!
Wish you to get to visit Petra soon, it is really a trip of a lifetime…

Wow! I dont have any words to describe these pictures… :)

Thanks Raquel :) Happy to hear you liked the photos!

I’m sure you don’t need me to tell you how stunning these photos are. Actually I should tell you that on every post you make, but I think you’d get tired of hearing from me ;)

[…] I read Guilia’s post on her site, Travel Reportage, about her first sight of Petra by Night my interest initially merely simmered. As I read on, however, she really captured my imagination as […]

Loved this! Never been and looks stunning. Thank you :)

This was definitely one of my highlights in Jordan, it’s really beautiful.

i’m from in petra Yes Petra is very beautiful, but have the advantage of night where calm and wax where lighting reminiscent of the inhabitants of Petra how Kat atmosphere they have at night
Beautiful and romantic atmosphere It’s a beautiful feeling
I invite you to visit again

[…] Petra (Jordan)! I know you think you know how it looks like and all, maybe you also believe it’s overrated… well it’s not. For me this was one of the best travel moments of my life. You can read all about my intense encounter with the Treasury here! […]

[…] summer 2012, I had one of my most memorable travel moments when I finally visited Petra, Jordan. The first time I walked down the Sik to see the Treasury, it was night and I joined the […]

Love those pictures! I have attended Petra by Night as well, but only had a very crappy camera with me and my pictures are nothing like yours! Maybe one day I will be back there to take better ones :)

What’s up to all, how is everything, I think every one is getting more from this web page, and your views are pleasant for new users.

Thank you for the detailed description, it must have been a mesmerizing experience!

Thanks for a marvelous posting! I genuinely enjoyed reading it,
you’re a great author.