As many of you know, Hagia Sophia was once a Bizantine church. It was converted to a Mosque by Sultan Mehmed II and nowadays it is a museum.

Most of the Christian features were removed but many others are still there, together with some pagan symbols that we can often find in churches. This is because Christians have adopted and converted pagan symbols since the early times of its expansion. 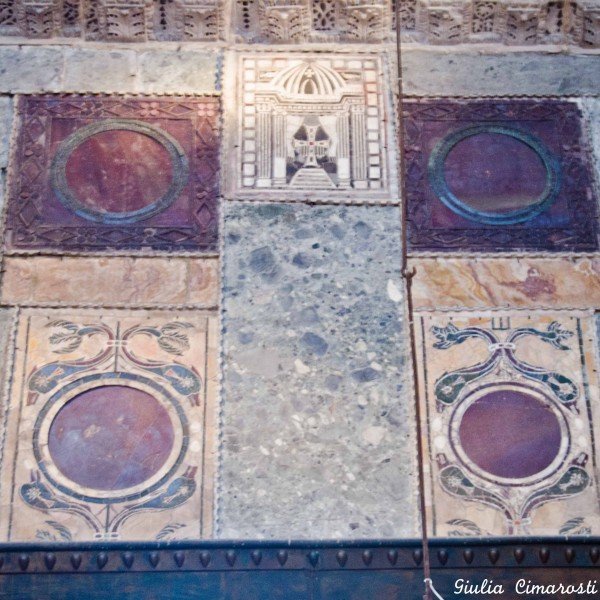 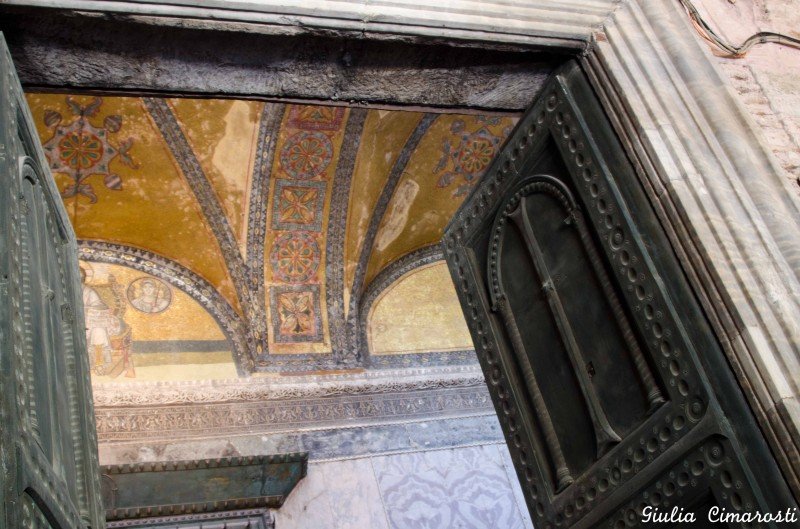 Temple signs on the entrance of Hagia Sophia

On the main gate there are embossed columns, indicating the entrance to the temple. 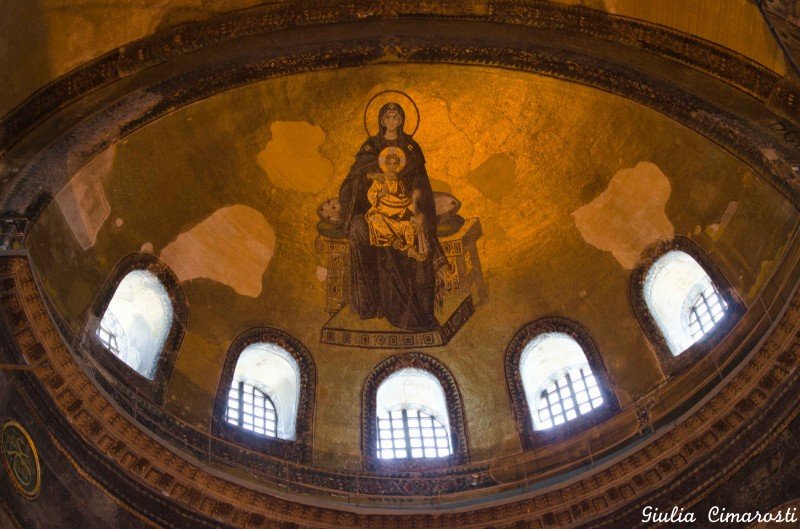 Virgin Mary and Jesus, as Isis and Horus

The iconography of Virgin Mary and Jesus come from the ancient Egyptian tradition: they are in fact the representation of Goddess Isis and Horus. The halo refers to the God Sun (Ra in ancient Egyptian mythology). 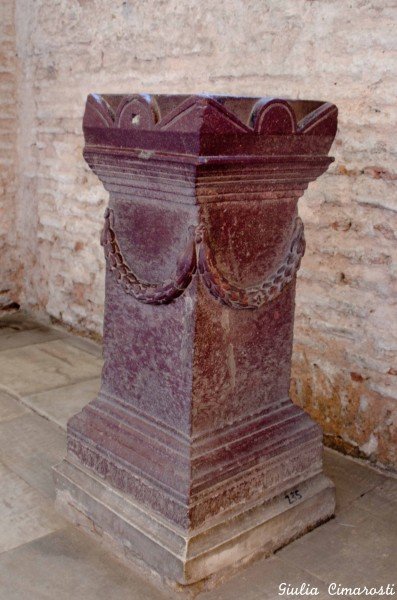 In the Pagan rituals, the altar was (is) used for offers to the Deities. This is something that Christianity has adopted for its worship. 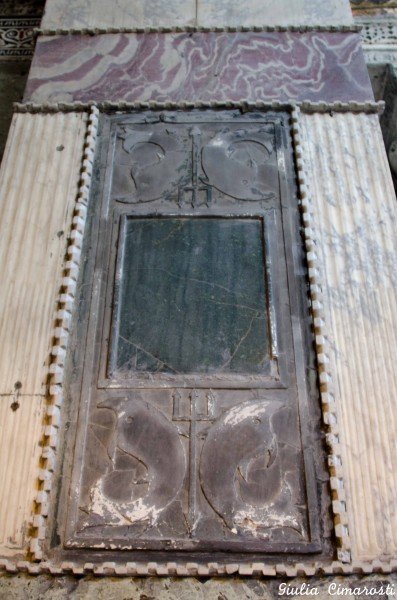 Another trident and dolphins, symbols of Atlantis, in Hagia Sophia

Another representation of tridents and dolphins, indicating some form of worship to Neptune/Poseidon and a reference to Atlantis. 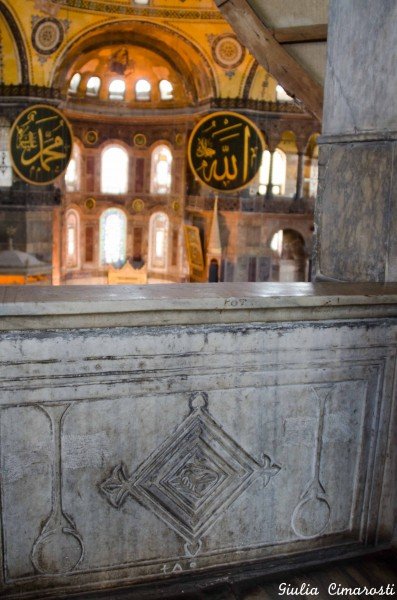 The erased cross and the Mother Goddess symbol

On the upper gallery of Hagia Sophia you can find numerous crosses (the lateral parts were deleted by the Muslims) with the lower (round) part still indicating the symbol of Mother Goddess. 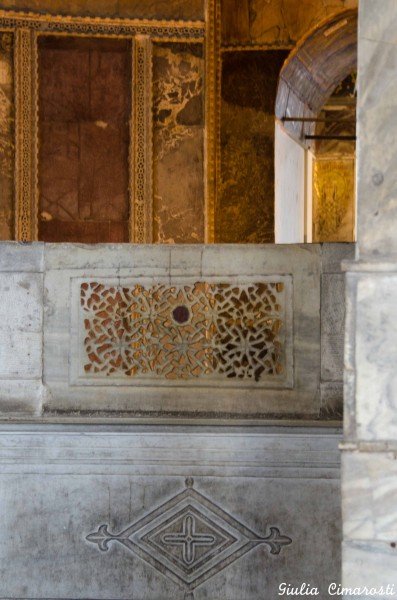 The symbol of the sun, right at the ceremony place

Just on the side of the ceremony place, the red circle in the decorations refers to the Sun or Solar Disc (Ra, in the Egyptian mythology). 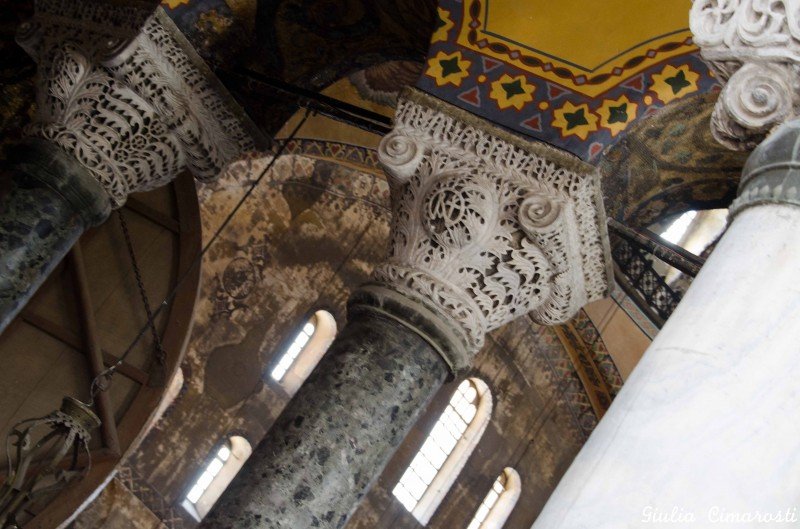 On each column on the upper gallery there is a capital with monograms. This one in particular is unique – it represents the Ankh (the Egyptian key of life) and a Freemasonry symbol. Who put these symbols up there? It’s a mystery. 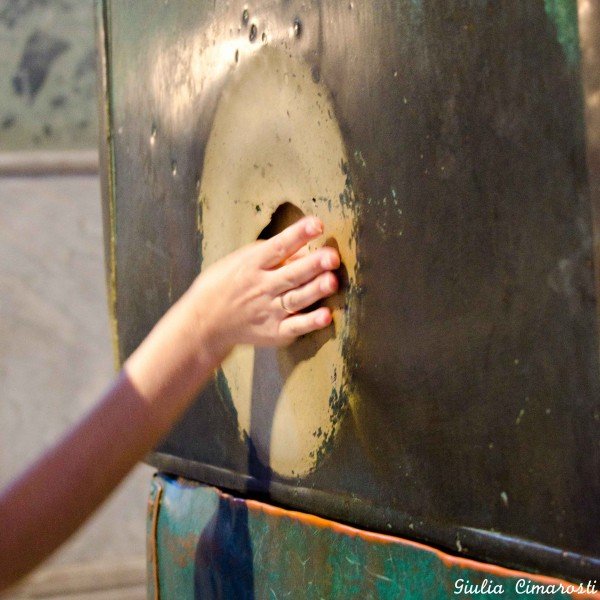 The hole in the column – if you turn your hand in it, you will have good luck. A typical Pagan concept

The so called “wish column” features a hole where people stick their inch and rotate their hand. If the hands does a complete circle, this will bring good luck. The hole is in fact indicating the Mecca, but the luck concept is typically pagan.

Interesting, huh? Next time you visit a church, make sure you keep an eye on the pagan symbols!

Very interesting. We’ve been to Aya Sofya twice and I thought I was quite well versed in most things Aya Sofya. Obviously not. Always something new to learn. :)
Julia

Honored to let you discover something new! It was very interesting to see this place from an alternative point of view :)

Above information “Monograms on the columns – the one in the middle shows an Ankh (Egyptian key of life) and a Freemasonry sign” is completely wrong. This is a broken monogram of Justinianus. Conspiracy theories are fun but here, they didn’t work ?

I am totally against conspiracy theories, so if this looks like one, I apologise!

Cult of
Theothokos came from
Egypt but image like this one ( has no connection to “biblical” scene )was known in many ancient cultures. (Golden Hittie goddess ). There are “odihitria” type In Christian idolatry – its came from Auset Heru absolutely.

Crosses besides all are ” pagan” symbols 2 ??

Greetings . I visit Αγία του Θεού Σοφία – Αγία Σοφία ( Hagia Sophia ) every time i visit Constantinople ( almost twice a year ) . I will go bottom up to my answers . Theotocos , or mother of christ , Panagia , is not a copy of any religion , she was a human . Isis and Osiris , mythical devine entities during their lives . Holy Mary and Jesus Christ on the contrary follow none of those patterns .

Now for the author . Symbols are borrowed since the beggining of time . Borrowed from other cultures , not religions . The smart architects of the temple advised Justinian to introduce them , making all the visitors feel comfortable entering the temple . Mainland Greeks , Asyrians , Egyptians , Armenians . Symbols they saw home , now seen in the worlds greatest temple , at that time . The main reason of them was decoration . Just for the main information , it’s an orthodox christian temple that followes the same decoration motive of other christian churches . The dome is decorated with the image of Jesus , representing the god that watches people all the time , angels at the columns ( ancient greek style , are they pagan too ? ) of the dome surrounding Jesus and Holy Mary on the sanctum’s half dome , praying with the priest for the people .

If you do want to get really informed about Hagia Sophia why don’t you contact mrs Glikatzi Arveler , a former rector – historian – byzantinologist of the Sorbonne University . She does know all about what i’m talking about . Better than me , better than your “paganist temple” theory :)

I went in the Hagia Sophia and I know it was a church but I was wondering why it had early Roman pagan and general pagan infrastructure. Same thing with the underground system. I understand that the first Hagia Sophia was a small wooden church. But that burnt down during a fire and riots. If you look at it when the Roman empire made christianity the main religion, they actually persecuted pagans, especially from the reign of roman emperor Theodosius the first. So when emperor Justinian actually reconquered most of territories that the west roman empire lost he searched the north africa, europe and middle eastern regions and just took pagan infrastructure from destroyed temples to make this grand hagia sophia.

This is why i believe that it should have been kept a museum to commemorate, pagan, christian and islamic history. Making it a mosque will anger christians and making it a church will anger a few pagans left.