Today is an historical day – Jun 24th, 2012: Egypt has a new president after the 30+ years of dictatorship by Hosni Mubarak.

The new president has finally a name and it’s Mohammed Morsy, announced today to a Tahrir Square that looked so silent while waiting for that announcement, and that bursted into a joyful celebration as soon as the result was finally declared.

Until this morning, the news I got from my Egyptian contacts were completely different. In fact, today the Square wasn’t expecting Morsy’s victory. They were all there to react as soon as Shafeeq was declared as the winner.

Are you wondering who Morsy and Shafeeq are? Here’s a very quick explanation, just to give you an idea.

Morsy – Leader of the Muslim Brotherhood

Not that much of a choice, huh?

I was watching the live coverage of the new presidential election, and even if my Arabic is not very good it was enough to understand that the new president was not Shafeeq, but Morsy! What a surprise, and a very confusing one.

24 hours ago I was told that the rumors about Morsy’s victory were just a lie of the Muslim Brotherhood. I was told that in reality Shafeeq won, but the MB was trying to convince their supporters that they did, so that once Shafeeq was declared the winner they could accuse him of manipulating the results.

I was still trying to understand this concept and then… surprise. Morsy REALLY won! Did they expect it? Didn’t they? Man I am giving up on understanding this one. 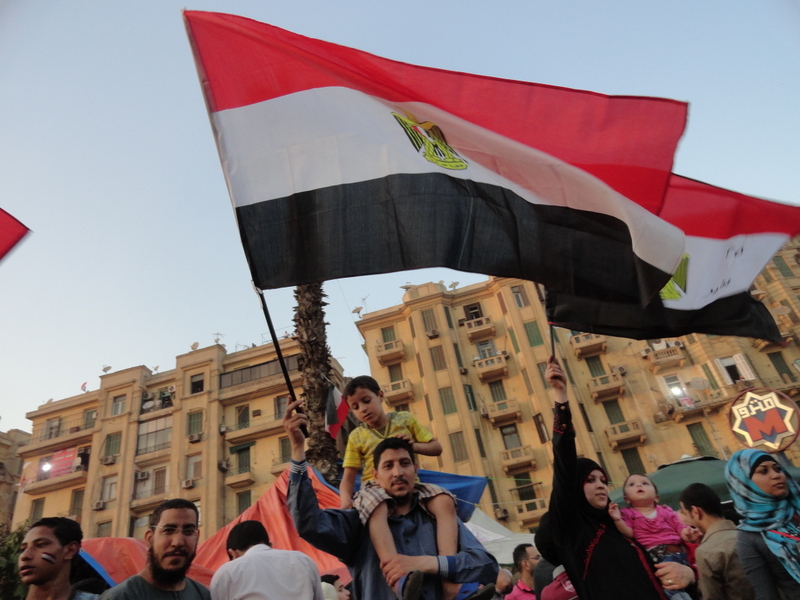 So now Egypt has a new president, and I heard/read all kinds of comments. Fun and unnerving at the same time.

My opinion first: I wasn’t rooting for any of them. I supported Sabahy but he didn’t make it to the run-off. Having said that, I asked myself many times who I would choose between Morsy and Shafeeq if I had to vote.

well if I was the mother of a martyr, I would vote ANYONE but the one that killed my son.

So my choice would have been Morsy “with lemon“, as an Egyptian would say – meaning that a lemon would take out the bitter taste of voting for him.

I would assume that:

People who voted for Morsy are either more or less conservative Muslims or people that just wanted to try something new, whatever it is.

People who voted for Shafeeq are Christians, and people who were not happy with the Revolution in first place. Or people that are just against MB and would prefer anything but them.

I don’t know what will happen now, but definitely the big question now is

Someone is arguing that Egypt will become a radical Muslim Country with Islamic laws and all. I am optimistic, and I think (hope) it won’t happen. Egyptians are calm people that like stability, they wouldn’t want to change their habits all of a sudden. Also they are so welcoming and passionately curious about the foreigners. I always felt so welcomed in Egypt and I can’t imagine Egyptians accepting that tourism could be strongly affected. Morsy is also declaring that he will be a moderate president, whatever it means. 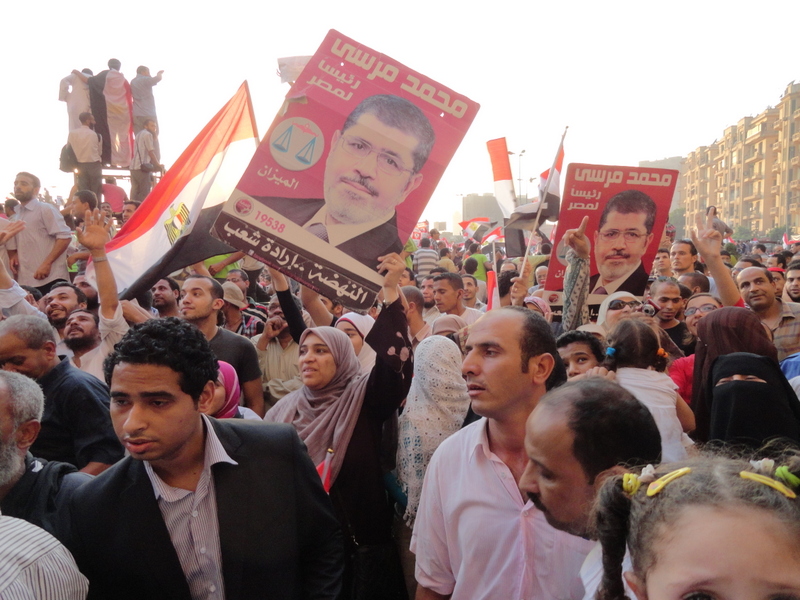 What scares me is that a new constitution will be written and if it contains Islamic rules then it will be far from democracy. Egyptian laws already state things like “the testimony of a woman is worth half a man’s one” and stuff like that. I just hope it doesn’t get even worse than this. In this sense, I am worried for the Christian community of Egypt. Will they be ok? Will they have to leave? Only time will tell.

I was kind of happy to see people cheering in Tahrir Square, until I heard the chants going like “Allahu akbar” and “Islameya” (respectively “Allah is the greatest”, which is ok, and “Islameya” calling for an Islamic state).

What cheers me up is that Morsy didn’t win with a great majority in votes, so I hope he will come off his high horse and behave, as Egyptians already proved him that they may kick his ass anytime. And he has to be careful, as the Muslim Brotherhood was never supporting the Revolution… those who’ve marched in Tahrir on January and February 2011 don’t love you, dear Morsy, and I bet they have a good memory.

Someone else is predicting a coup by the army. I really can’t say. Why do I keep being optimistic and think this won’t happen?

The last opinion I heard is people wishing Shafeeq won, as it would be better to stay with what they know for 4 more years than giving the power to the Muslim Brotherhood.

We have to keep in mind that even if the Revolution was huge, it involved just a small percentage of the population. Even if every single person who took part into the Revolution voted for Sabahy, this wouldn’t be enough for him to win. Egypt is a huge country of more than 80 millions people and they say that the Square held a million protesters “only”. So I know Morsy won’t be the president that the revolutionaries wanted.

Also, I would like to remind to the foreigners that cringe at the thought of an Islamic government that Egypt is a Muslim country, so as much as it would be weird to have a Muslim president in Europe (even if it would be democratic), there’s nothing strange in it when it comes to a Muslim country. Don’t you agree? And would you please look at your politicians before judging others? Thanks.

Either way, none of the candidates ever supported the Revolution so it’s a fail anyway. This is the sad truth.

Anyway what I feel like saying is Good Luck Egypt.

Everything will be OK in the end and if it’s not OK, it’s not the end -Anonymous 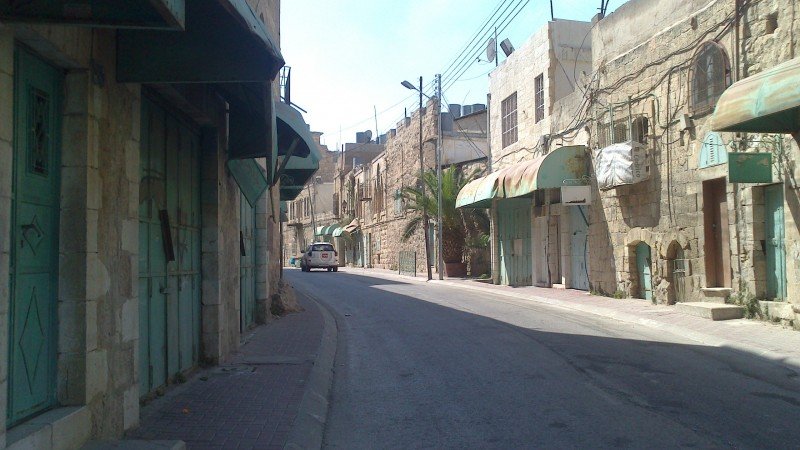 Shuhada Street in Hebron, the ghost city of Palestine
12 Aug ’13

As you know I’ve been here the last few weeks and seen it all in person. I can’t even explain to you how the atmosphere in Tahrir has changed from day to day, but I’ve never felt it like I felt it yesterday. Watching people full of joy celebrating a victory (even if it’s a victory they really didn’t want). From the moment they announced the two candidates Morse & Shafik I ketp asking my self “I wonder how the people of Egypt must feel being stuck with the worst two candidates possible?” I also kept asking my self “If I was Egyptian who would I vote for?”. The truth is to this moment I know most Egyptians were filled with disgust at the two candidates, but for some reason I have no clue who I would have voted for. I mean you are really stuck between a rock & a hard place. The old regime or a very conservative Muslim.

The thing we have to keep in mind is in the end are the things you mentioned. The revolution began and is supported by only a small percentage of the country. We also have to keep in mind that yes Egypt is a Muslim country so it’s not strange to have an elected leader who is Muslim and a bit conservative. People are fast to judge when any type of conservative Muslim is head of state in any country. However what about the many conservative “Christian” heads of states? Oh it’s okay then… because well “being a conservative Christian is okay”.

For some strange reason I have a gut feeling that Morsi is actually going to be a good President. I have a feeling he is going to show the world that he isn’t crazy and that Egypt can still be a great country. I at least hope he does that. I mean he has the world attention like no other newly elected President. The world is literally his oyster and if plays this right he can go down in history of one of the most amazing men ever. If not well he knows what the people of Egypt are capable of.

P.S. Thanks for using two of my photos. You picked two of my fav ones. Those are both so perfect.

I am just wondering how condescending you are in your blog. You seem to suggest that Muslims are inherently bad and Islamic law is worse than the liberal secular laws. You also seem to suggest that the 80 Million Egyptians are generally idiots and the 1 million protesters have all the solution.
The Muslim Brotherhood has been agitating against the dictators of Egypt long before any of the “new liberals” came along. They have a very long history of providing social services to the poor when the government failed to deliver services to the people.
As a president Morsy should face the same expectation faced by any elected president. The field is skewed against him. The military is controlled from outside Egypt and the liberals, secularists and Christians seem to have a grandiose model of recreating America in Egypt.
Instead of casting aspersions at the new president before he assumes office, instead of writing lies, fallacies and insinuations against the Muslim Brotherhood, instead of creating false expectations, instead of judging Egypt on how secular it is, commentators should wait and judge the new government on service delivery to the Egyptians. That would be a better yardstick than subjective analysis based on Islamophobia.

Xudayi, I have the feeling that you didn’t read past the first half of my post as well as of Jaime’s comment. No islamophobia on this page at all… maybe are you just a troll? Cheers!

Wow agree with you Giulia, this person clearly didn’t read your post or my comment. None of that was mentioned on this post. You clearly stated your thoughts.

Oh yeah, she is truly and totally condescending… How come you think that low of the trolls Giulia?

Amr, I read your comment many times, but I still don’t get it…

Thanks for your comments and care about Egypt ..
I voted for Morsi as he was the best options we can get .
Shafeek wasn’t an option..If Shafeek was the new president that means the old regime is back and nothing changes and revolution changed nothing .

I guess that the idea of choosing the lesser evil (forgive me for the term) candidate is not really good, but if that means that Egyptians will not be under someone who wants to fill in the shoes of Mubarak.

This is just one of the problems of democracy, there seems to be no perfect candidate to lead a country. The voters end up hoping that the winner will work for the betterment of the country.

Fascinating post. I haven’t heard much analysis about the election so it’s great to hear your take, having lived in Egypt. When I visited Cairo a few months after the revolution I was struck by the optimism of the people. Hopefully this will be the start of a solid presidency.

I feel so sorry about the happening in Egypt. I thought that the problem was solved after the revolution has changed the people’s mind, and they could create a better society in the new democratic environment. Unfortunately, the things are going in a wrong way…