New York City and Boston in black and white

In My Travel ABC Q+A post, in one answer I stated that New York City is my least favorite destination so far. I instantly felt like I had to think again and make it up to the Big Apple!

The main problem for me during my 6 months in New York was that everything was extremely expensive, and I wanted to do EVERYTHING I could, so I ended up draining my bank account, but this doesn’t mean that I didn’t have a great time there!

The best thing that happened to me in NYC is that I took my first serious photography course. It lasted 3 months, and through the assignments that I got every week I had the chance of discovering areas of the city that I wouldn’t know otherwise!

The course was about black and white photography only, and because of this I had to face a challenge: I understood how important for me is the role of colors in a photo, at least until that moment. When you shoot b/w, the subject becomes the only character of the photo, with the main role and the key of the shot’s outcome.

I had to go beyond the classic NYC street photography, and ended up focusing on details much more. I remember wandering around New York City, riding the metro to unknown, random stations, and spending entire days looking for the “perfect shot”. Sometimes I went home at night with only one good photo, or even none. It was frustrating and stimulating at the same time. In the end, I collected a handful of shots I am still very proud of! Here they are. 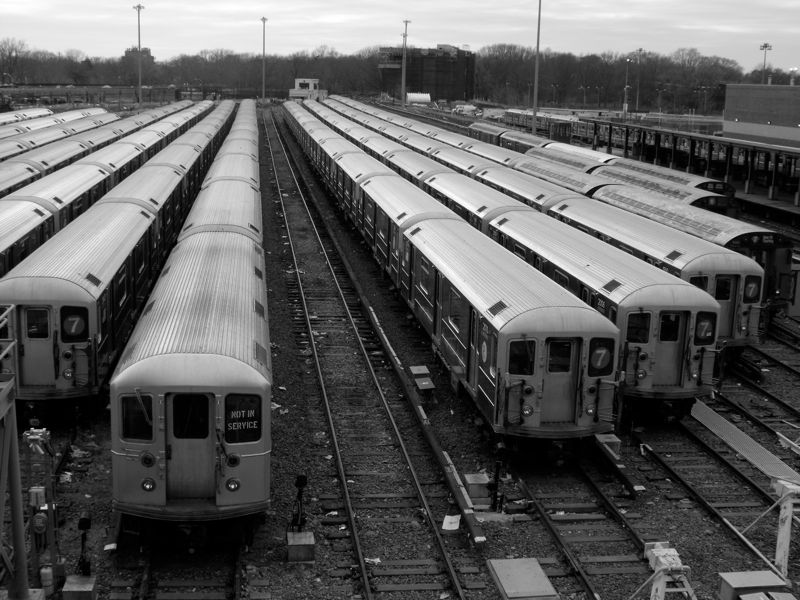 This is where the train line number 7 ends. I didn’t realize how much I liked this photo until I saw it on my computer. Every time I look at it, I can’t help but thinking about the song “Tram number 7 to heaven” by the Swedish singer Jens Lekman. If you don’t know him, I suggest you to listen to it! 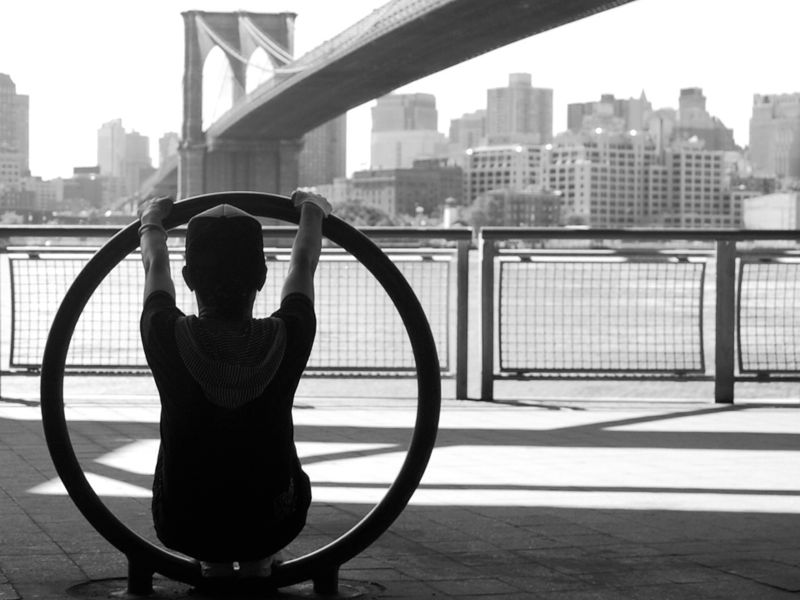 I took this picture while I was randomly walking down Chinatown. I walked and walked and found myself just before the Pier 17. Suddenly this Chinese woman, who was jogging down South Street, starting doing some excercise/stretching in one of these metal rings. I took this picture very quickly, as she immediately moved away. When I look at this photo I always think I should have framed better, but I just didn’t have the time. So, even if I am not 100% happy with this photo, it’s still one of the most remarkable ones I have. 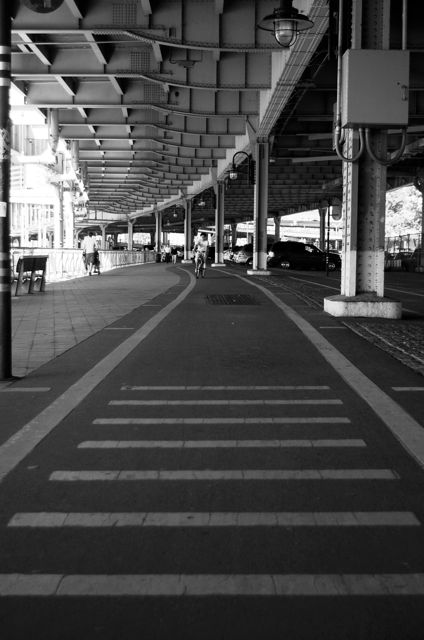 Just a minute after shooting the previous photo, I took this other one. I realized I am kind of obsessed with lines, and I can find lines in many of my black and white photos. This street with a bridge above makes me think of a hourglass. Appropriate, for a busy city like New York! 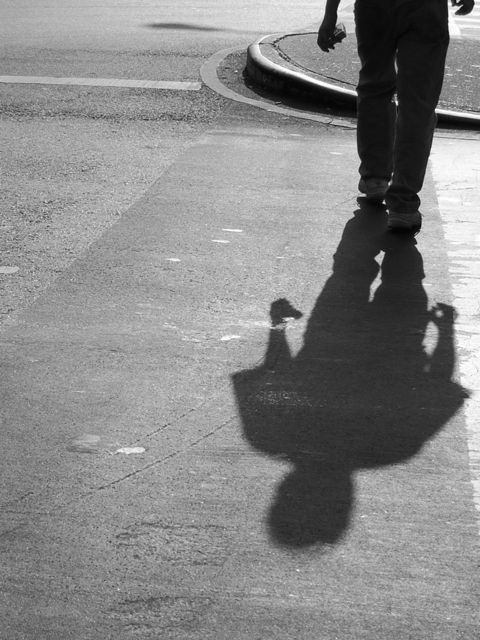 This one also has a story. I was going to the photo shop to print my last photos, in Chinatown. I used to print my images in Chinatown because it was cheaper, and close to where I used to live (Lower East Side). I wasn’t satisfied with the photos I got and kept wishing I could shoot something interesting on the way to the shop. The light was amazing, it was almost sunset time, and the long shadows inspired me to take this shot of a Chinese man’s shadow. For the records, just a few minutes later, while waiting for the photos to come out of the printing machine, I found out that Michael Jackson died (which I still can’t believe). Nobody in Chinatown gave a damn about it.

Manhattan skyline as seen from Queens

We’re all used to see the other side of NYC’s skyline – the financial district and all. I took this photo from the opposite side, past the East River, in a rather dirty and neglected area of Queens. If you think the photo is underexposed, it’s probably true, but I wouldn’t change it because it still conveys me the feeling of that gloomy day. 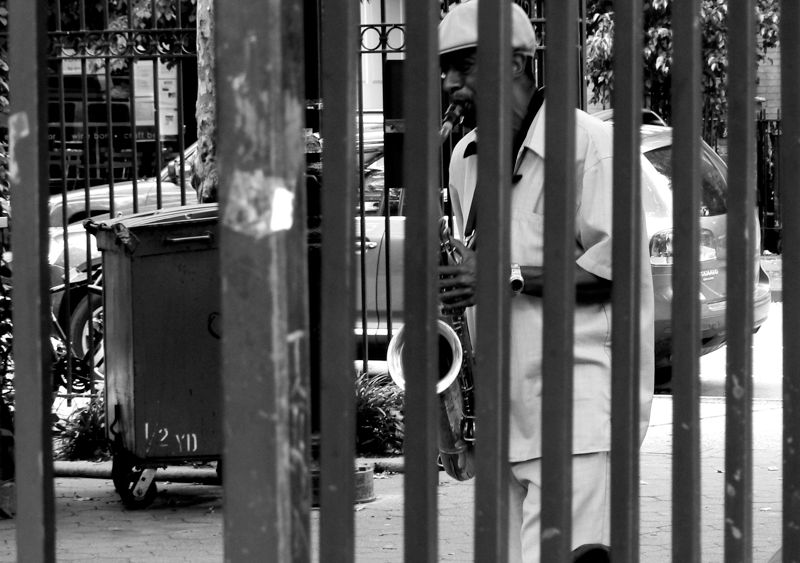 I took  this photo on Houston Street. I am probably the only one who likes it (as far as the feedback I got makes me guess), but I keep being proud of it. I have no idea about this man’s story, but in my imagination he plays the sax to make a living, and is living in the cage of poverty. Just a guess, but that’s the story of my photo. 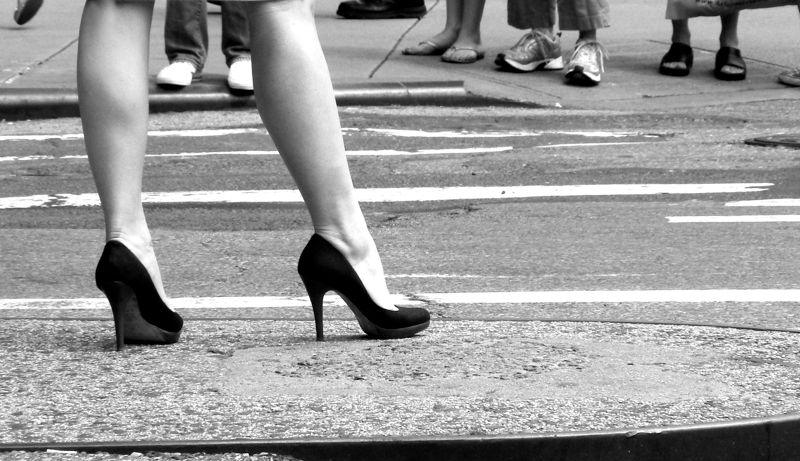 Totally opposite to the photo above – I love the contrast of the beautiful, sexy and “self confident” legs of the foreground, with the other feet on the background: kind of shabby and intentionally blurry. I was at the traffic lights, and while waiting I saw this scene that I couldn’t miss! Click. 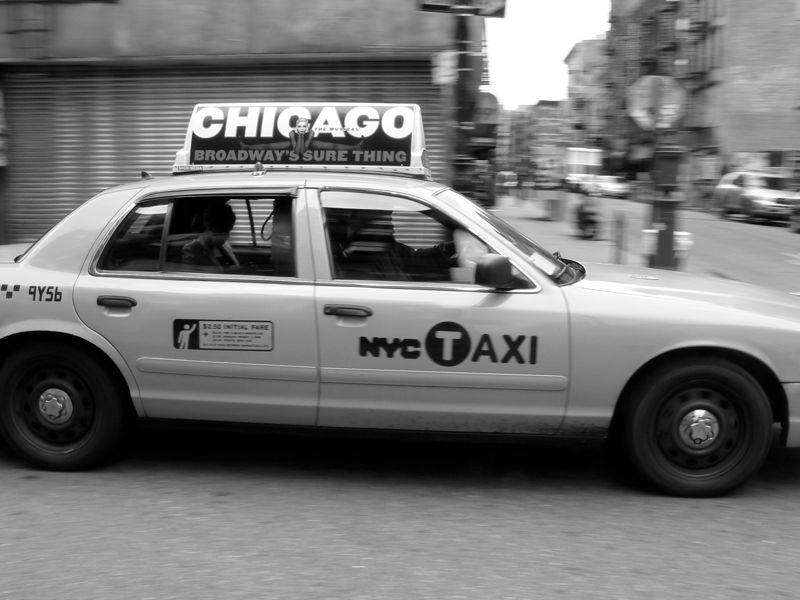 A classic, ordinary and banal shot of a taxi in the streets of the Lower East Side. Okay, I wanted to take one too. And in my version, there is a nice panning effect (i.e. the blurry background giving the sense of movement). Run, NYC, run. 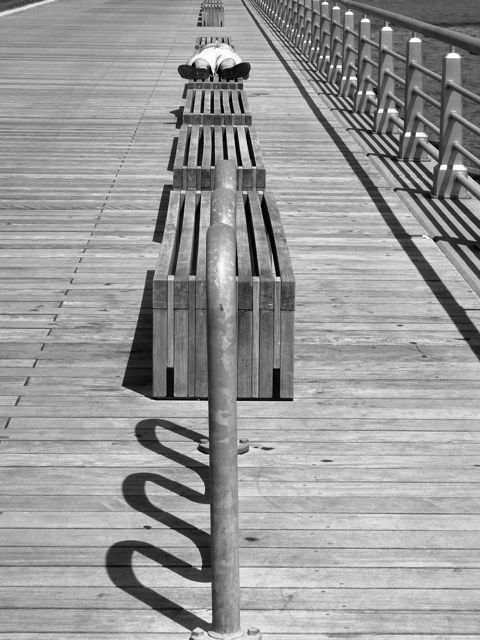 Lines again! The Chelsea Piers are one of my favorite places in Manhattan, where one can rest, relax and sunbathe! This unknown man laying on a bench totally made my day. Apart from the fact that I like lines, I also found out that I shoot portrait much more than I thought before, and I actually like it. 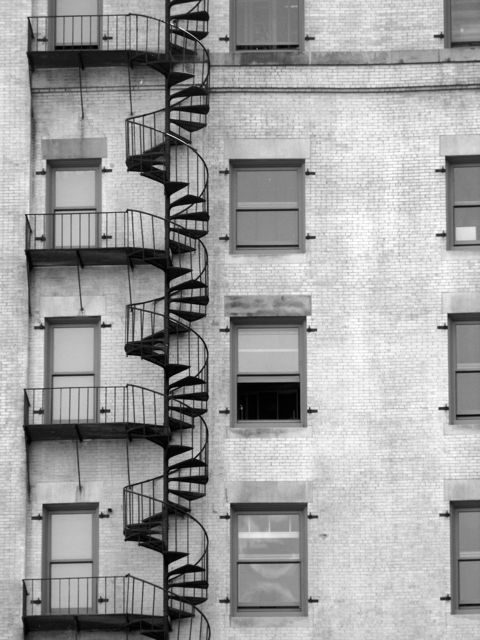 As soon as I got out of the bus terminal in Boston, I had to take a photo of this. I loved the repeated pattern of the facade of this building. Open windows, closed windows, and a beautiful spiral staircase on the side. Think about it: this photo wouldn’t be as good if it was in color. 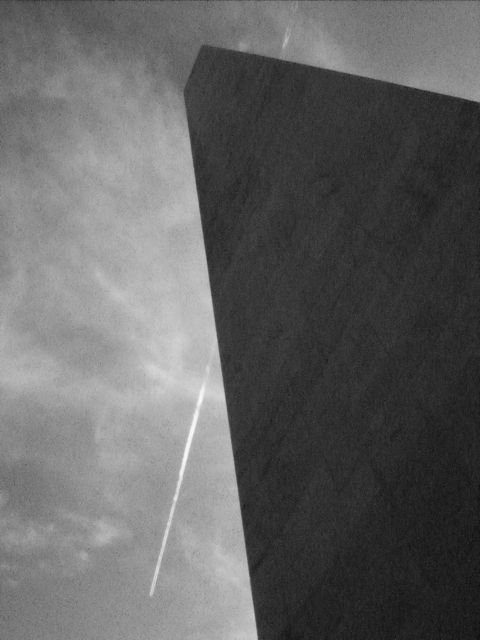 The Bunker Hill Monument in Boston is a 220 feet tall squared plan column. It’s very hard to take a photo of it that doesn’t look boring, and I tried something to make it look more interesting. First of all, I chose an uncommon angle, then I speeded up the ISO to 1000 (in the daylight!) to create this grainy, “film effect”. The clouds were just perfect to add some atmosphere, and the plane wake was just the perfect final touch!

Okay New York, did I make it up to you now?

Have you been to NYC? How did you like it, and did you find it easy to shoot photos in the metropolis?

Beautiful photos! It’s nice to see you making it up to my abused home. Of course if you saw the link I put up from the Onion you’ll know that deep down inside I have the same reservations!

What link? I assume I missed something:)
*private message on the way*

I have a thing for black and white photos…they just always seem so beautiful!
my favourites are union square high heels and shadows
good job :)

Thank you Mina, I appreciate your compliments and I am glad you like these pics!
Shooting B/W is not easy as it seems, but definitely worth it… :)

Cityscapes are best in black and white in my opinion – some of my fav sets are like that.

Thanks Erica:) I am glad you liked the photos, it’s a great compliment from a super photographer like you!

Nice sharing of video..New York has a lot of great places to visit..Looking forward to having a vacation here..

Manhattan skyline is my fav…click of boston building reminds me of FRIENDS tv show and joey`s house….kind of dejavu feeling… before…

Yay! You know, I saw the REAL Friends’ house in Manhattan:)
Thanks for appreciating the pics Akshaye:)

The photos are definitely fantastic!I hope I can go to that place soon…

I love the shot of the high heels in Union Square! You really captured that “Sex and the City” vibe :) Great photos of my FAVE city (NYC!) and thanks for introducing me to the tram 7 song… very appropriate! PS- Where did you take the photo class?

Thanks Leslie!
I took my classes at PhotoManhattan, on W14th str. and I even had an exhibit there!
It was a lot of fun:)

Wow, we need to use your website for simple lines examples :)

Anyway, did you stoop down to get the photo of the legs/foot/heels or what? If you did that then I would have to think that the others who saw you photographing the legs/feet thought you might be a pervert? (I don’t think so, that’s why I’m asking what your technique was).

Ahahaha Shannon, of course I didn’t knee or anything, I was just on the other side of the street so the perspective was just perfect :)

Great sharing of photo..How I wish I could visit new york..Thanks for sharing this post to us..

I really love watching these kind of photos, A signification image of time.

Really nice captures in black and white! They are always a nice change and much more dramatic I think! Hope your trip to the ‘Big Apple’ was enjoyable!

[…] up, on Travel Reportage, New York City and Boston in black and white. Here, Giulia shows her splendid photography skills. She made this post to make it up to New York […]

Nice post. I like hearing your thought process behind each shot. Must have been fun to do the course in NYC. Boston and NYC are great places to shoot–but I agree, both can be financially draining.

Exactly – financially draining: that’s why I didn’t enjoy it to the max. But I am happy I had this experience after all:) Spending 6 months in NYC doesn’t happen every day!
Thanks for stopping by and I am glad you enjoyed the photos behind the pics:)

Even its black and white this photo is really nice to see I like your shot perfect..

New york is a nice place!

I love the photos you have here…Thanks a lot! Great job here then!

I absolutely love your photography, Giulia, but especially that last picture. <3

Thank you so much, feeling flattered! :)