“Surreal”, is the first word comes to my mind when I think of where I was in these days last year, and what was around the corner for me.

After spending a lovely Christmas in Alexandria without celebrating at all and without sensing any Christmas atmosphere (another reason why I love Egypt) I went back to Cairo. In a 16-million people city, I found myself celebrating NYE in an apartment I recognized as soon as I got in it: I was there before for a house party on 2009. Small Cairo.

I still had a boyfriend and on the first days of January 2011 we treated ourselves with a trip to Singapore where I spent most of the time on my own exploring the island… nothing strange here!

While I was in Singapore I remember hearing about the uprising in Tunisia. My Egyptian friends were rooting for them, but (shame on me) I was too far, both physically and mentally, to think about it and realize what was really going on.

I flew back to Cairo just a few days before the Revolution Started. I must have missed something because I really had no idea of what was going to happen. My friends were making fun of this “Revolution rumor” and nobody was really taking it seriously. At least among my friends. Neither did I.

On January 25th, I knew it was not a good idea to go out, but I did anyway, and I ended up scared. Ran home, even if I still didn’t realize that the situation was more serious than I thought. And the following 2 days were just fine.

I had been living in Downtown Cairo for months and I found myself in the middle of the protests countless times.

On January 28th 2011, “the Friday of Rage”, me and a friend went out and shortly after realized that both the internet and the telephone lines had been cut. Something was about to happen and we could feel it in the air.

Journalists were walking in the (still) deserted streets, with cameras and cams, and I was secretly thinking that they were stupid: the police was going to seize all of it.

The streets were still desert because the Revolution was planned for after the prayer, that is around lunch time on Fridays.

By that time I was just on the other side of the Nile from Tahrir Square and I wanted to cross the bridge (Qasr el Nil) to go home. There must have been an angel watching over me as I decided to stop in a hotel to check the news before moving on. And I must thank this angel because in 15 minutes time, the hell begun.

I don’t know what could have happened if I even started crossing that bridge.

Here is the bridge I was supposed to cross… in a video I took on January 28th. You can hear the gunshots but you can’t smell the teargas…

The following days were confused, with a curfew that lasted from 3pm to 8am (!), shops emptied from any kind of goods, checkpoints every few minutes, army tanks blocking the streets, no internet and basically no contact with the outside world.

About 3 weeks later though, I was almost used to it. Used to finding myself in the middle of a demonstration. Used to go out past curfew, and feeling comfortable enough to explain the soldiers I was just a tourist… with the best smile I could do.

I will never forget these moments, and for sure witnessing the Egyptian Revolution has been the most remarkable event in my life so far. There’s no day in my present life when I don’t think about it at least once, and now that January 25th is coming soon again, I feel so sorry that I am not there for the first Anniversary.

Living the Revolution has changed so many things. I was shocked at first, I have to admit. But that was probably the only time in my life when I realized what being scared means. I remember hearing the gunshots sound and feeling my teeth chattering with fear.

Anyway, as you can see, I was totally safe. I never joined the protests directly and never found myself in actual danger. Now I know I was never in danger, but back then it was uncertainty that scared me.

After the Revolution the most amazing thing for me was looking at people in the streets and thinking that all of them now had a story to tell, and trying to imagine if they were in the protests, if they were hurt, or what.

In the following days and months, everyone was asking each other “what did you do on Jan 28th?” and everyone had an interesting story to tell.

Unfortunately I had to leave on May 2011, but I went back on October/November and witnessed the new situation. I couldn’t feel the enthusiasm anymore, and I was very sorry about it. People were talking about a “Second Revolution”, and shortly after I left again, I thought that was happening: the news were showing protests and police brutality again, and now happy endings look like a mirage.

Nevertheless, the Revolution brought something very important to the people: the pride of being Egyptian. I know Egyptians have always loved their Country but the Revolution made it a preponderant feeling and you can see it everywhere: street art, exhibitions, shows in general with a reference to the Revolution.

I will be in this new environment where I am spending the winter, and I couldn’t feel more far than this. I am surrounded by snow and breathtaking mountains; it’s been snowing every week and we reached 4 meters of snow; I work full time with Swedish, Norwegian and Danish people.

All is calm, the sounds of Tahrir are so far away in time and space.

I wish all of the people of Egypt a great 1st Anniversary of the Glorious Revolution, celebrating their achievements and never forgetting about the martyrs that fell and keep falling for freedom. 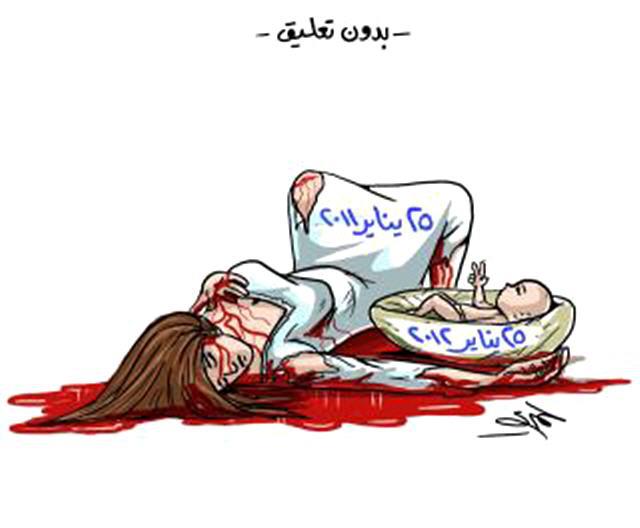 Thanks Akshaye :) Yes, I witnessed history and I think about it every day… today I was looking at some photos and I felt like crying! What an incredible memory. And I am happy I was there, after all. :)

Hi Giulia… This is a very interesting post. I enjoy reading this and thank you for sharing your experience…

Thank you for commenting, Casandra :)

i will be traveling from the US today, arriving in Egypt on the 25th where I plan to stay in Cairo for a week. This is my first trip to Egypt. Do you have any hotel recommendations in Cairo in terms of safety( that wont have me mobbed by protests if the 1 year celebration does indeed turn out to be more than just a peaceful protest?)

Hey there,
it’s great to know that you’re traveling to Egypt!
If you want to make sure you don’t get involved in protests, just try to stay out of the Downtown area.
You can find some nice hotel in Zamalek, Mohandessin, Dokki, for instance, and you’ll be 10 minutes away from Downtown without risking. :)
Anyway if the protests keep peaceful, I would totally go to Tahrir… Oh I miss that place!
Have fun in Egypt and let me know how it was :)

What an amazing tribute, Giulia. That was really an incredible experience.