It might not be well known outside of the Middle East, but the Children Cancer Hospital 57357 is the biggest children cancer hospital in the world. 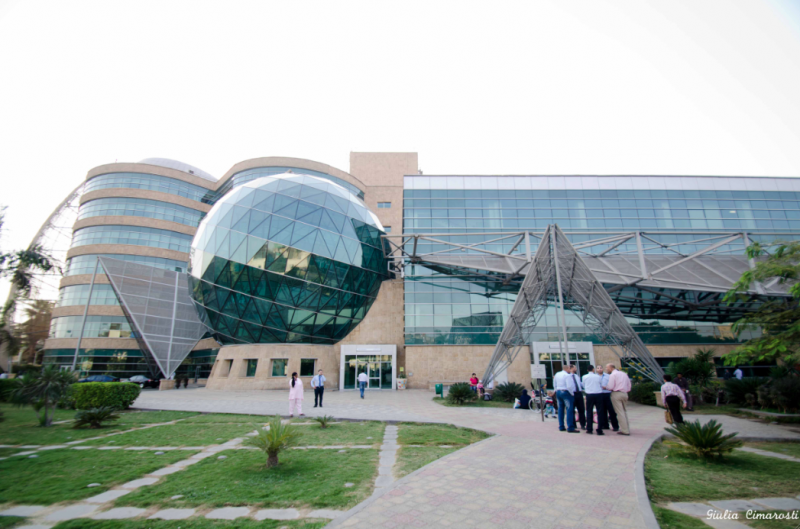 If you’re wondering what “57357” means (because that’s what I was wondering at the beginning), it’s the name of the hospital and it comes from the bank account number, so that people can memorize it and hopefully donate!

Here is the story of the name, as stated on the hospital’s website:

The most asked question is how the hospital got its name.  To promote the cause of the hospital project and to have an effective fundraising strategy from the onset, we needed to create a unique brand with a distinctive name, a name that people would instantly connect to being a worthy cause for them to support.   In a name storming session before our first fundraising campaign in January, 2000,  with prominent Egyptian advertising guru, Tarek Nour; Mr. Nour suggested that a number was very effective in making a distinctive, easily remembered name.  Our first bank account number was 57357 which is easily remembered in both Arabic and English while the numbers 3 and 7 have some religious significance.  And so Hospital 57357 was born! 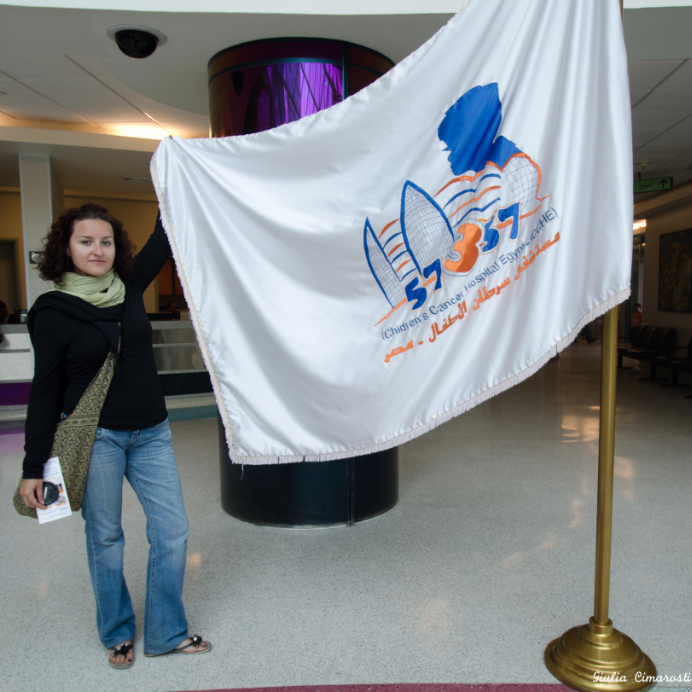 Me… testimonial for a day

This hospital was entirely built by donations of both Egyptians and other donors from all over the world, and hosts hundreds of ill children – there are 179 beds for now, plus the daily treatments rooms where children with “less serious” cancer can get their therapy and go back home after it. 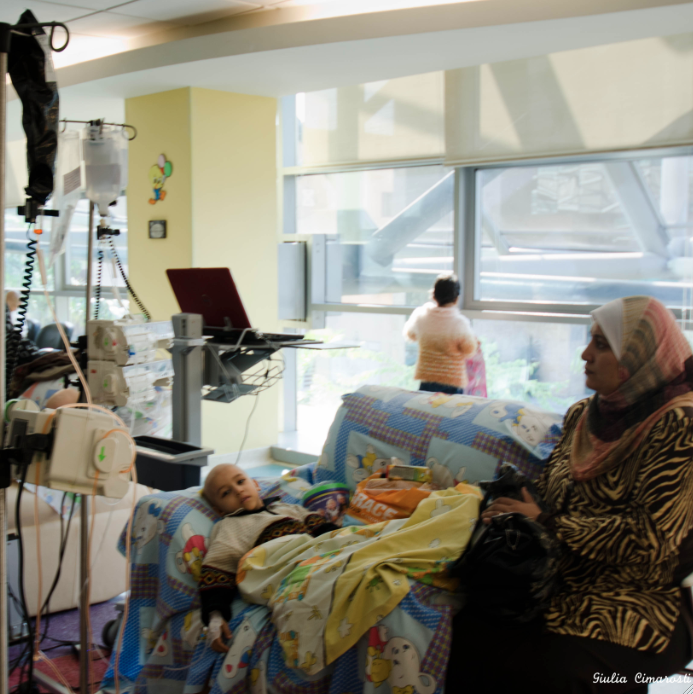 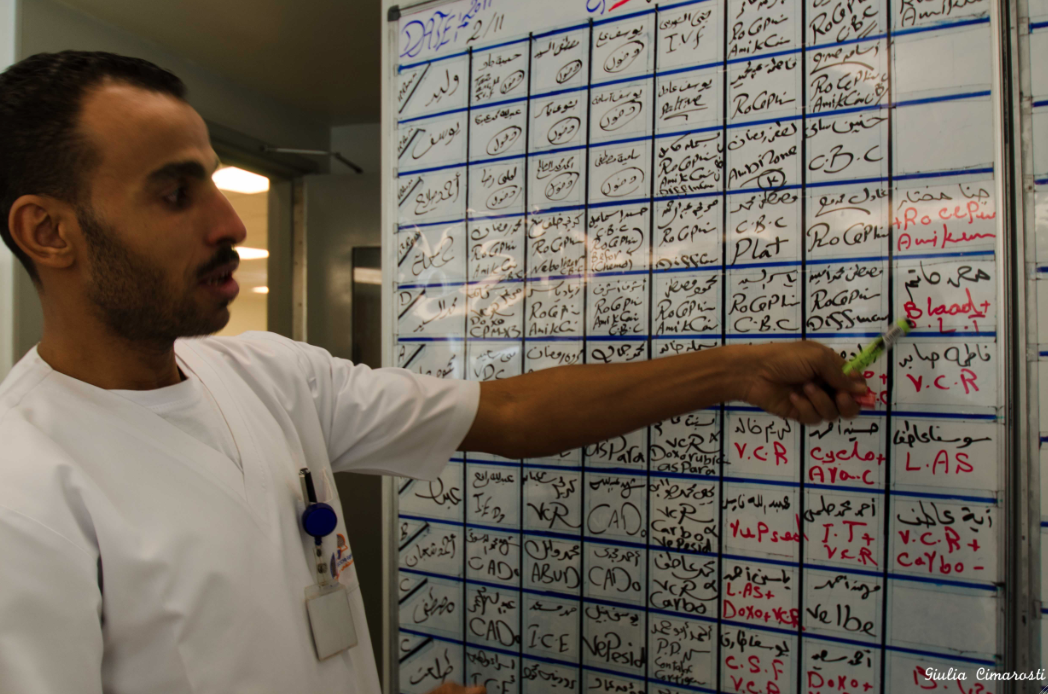 A nurse shows us the schedule for the day, with names, treatments, blood types, etc.

Numbers, numbers. Impressive numbers and all but you should see the long lines outside of the hospital every day. You can meet families of any social class in the waiting rooms. Families come from all over the Middle East and of course especially from all over Egypt, bringing their children hoping to find a cure for them.

The 57357 Hospital covers the 55% of total annual cases of cancer in Egypt, which is of course not enough, but still a great step. And do you know what’s the greatest thing? Children are cured for free.

Another impressive thing is the amazing building that hosts the hospital. It’s a super modern and clean structure that was awarded the  the Middle East Hospital Build 2010 Prize for Best Physical Environment and Highest Commendation for Best Sustainable Environment. 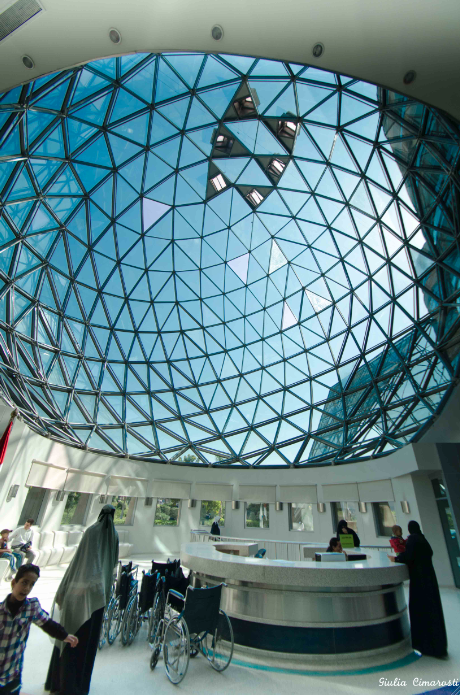 The impressive entrance hall of the hospital as seen from inside

Every aspect of the hospital is built according to its little patients’ needs: each floor is identified with a color, so that children can freely move around the building without getting lost – they can always ask for “where’s the blue floor?” and find their room again. 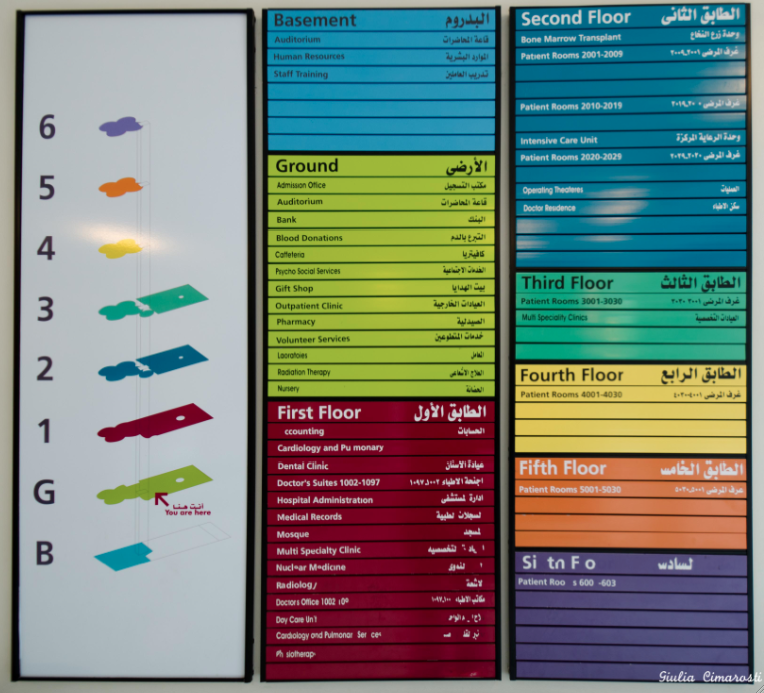 Even the interior design is not too “gloomy” as hospitals usually are, to make it look as much as possible like a happy environment.

The man who got the idea of building this hospital was a nurse at another hospital in Cairo and he was so shocked by the conditions that children had to live with, that he decided to create a brand new, independent environment to give ill children what they deserved. 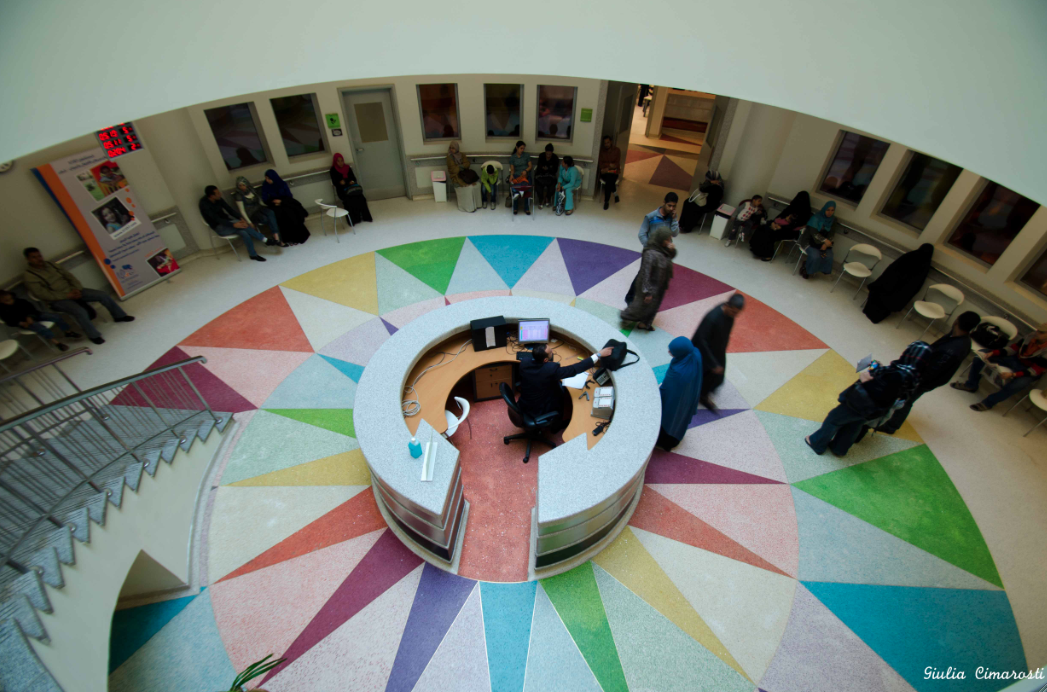 Inside the colorful hospital

I probably wouldn’t even have known the 57357 Hospital existed if I didn’t have a friend working there, who very kindly allowed me to enter and take photos inside.

I admit I was nervous and sad even before entering, and I even cried just thinking about it. I’ll tell you later how I felt. Now, let me introduce you all the kids that I met during my visit.

Before entering the patients’ rooms we visited the common areas – waiting rooms, play rooms, treatment rooms. My first encounters were two little children in the library and play room, where they can read a book or play with a computer game while they get their therapy. 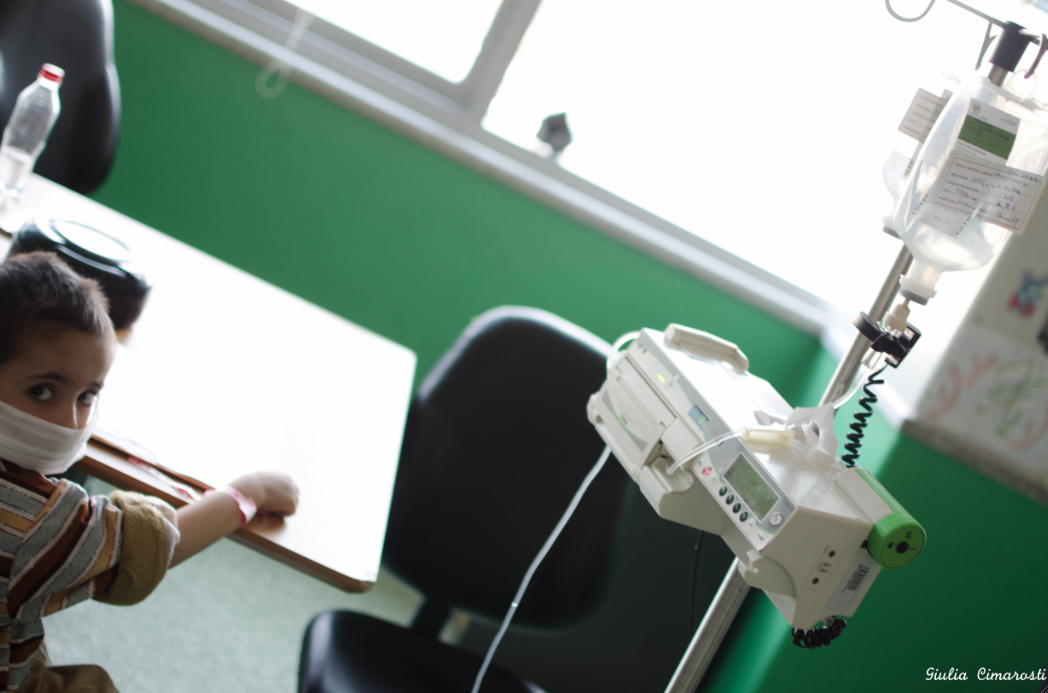 Youssif, getting his therapy while reading in the library 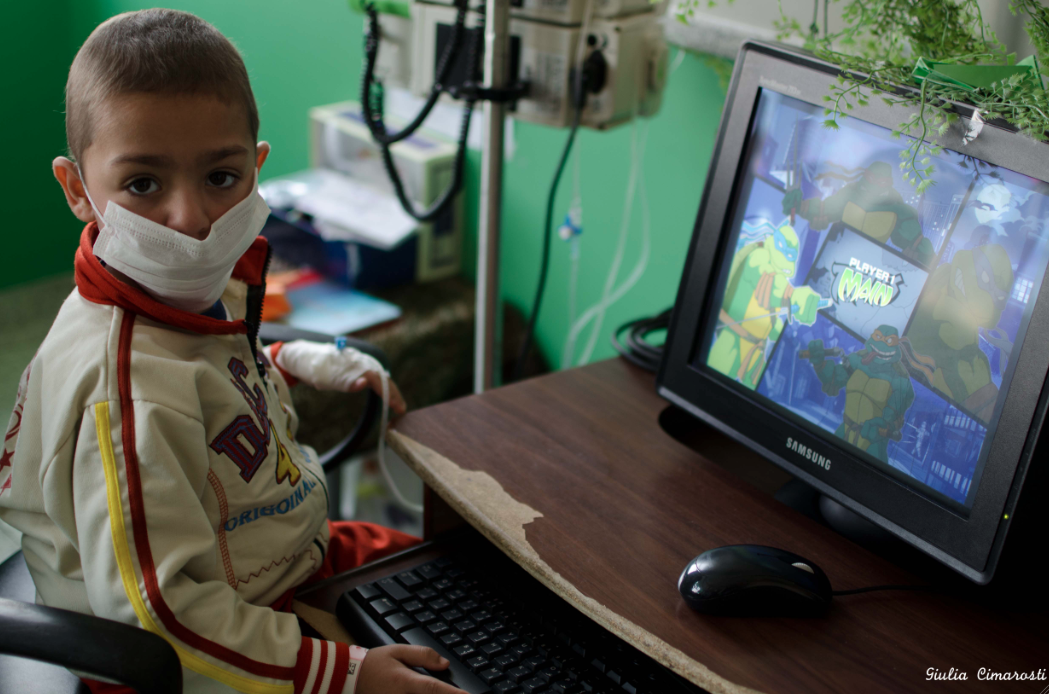 A kid playing while getting his treatment

It was not easy to speak with them because of my basic Arabic skills but luckily all went well and my friend Mido who works in the hospital was translating their replies for me.

We then moved to the upper floors where the in-patients are.

We were given a mask and we had to wash our hands before entering. Everything in the hospital is very clean and well preserved. 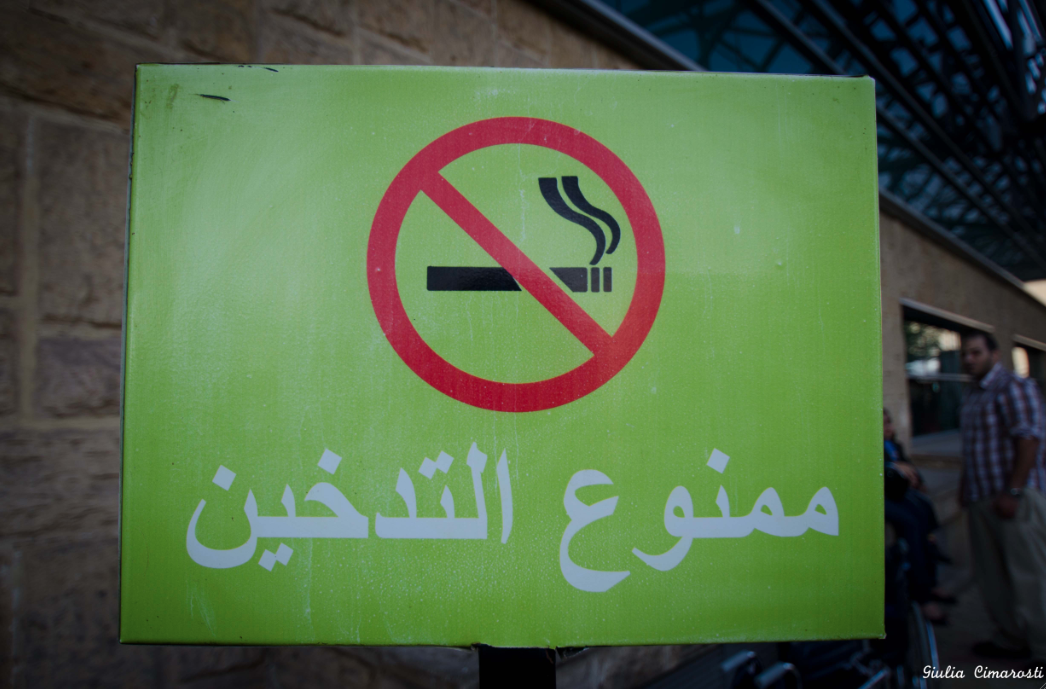 One of the rare places where smoking is forbidden in Egypt. 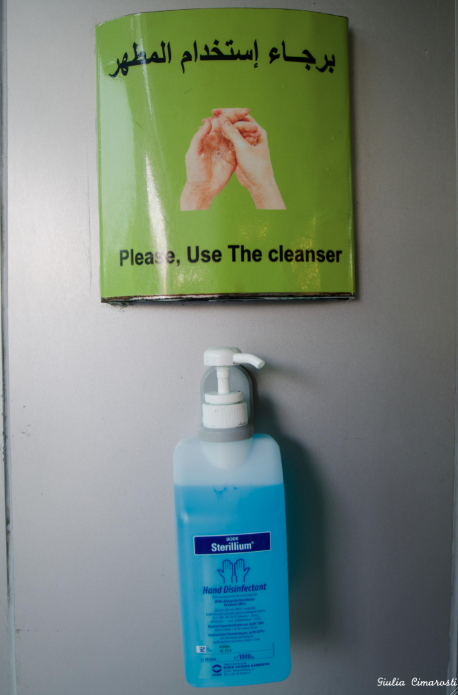 Obligatory: wash your hands before entering

It was just about dinner time and we followed the nurses distributing food, then met some more kids in their own rooms. 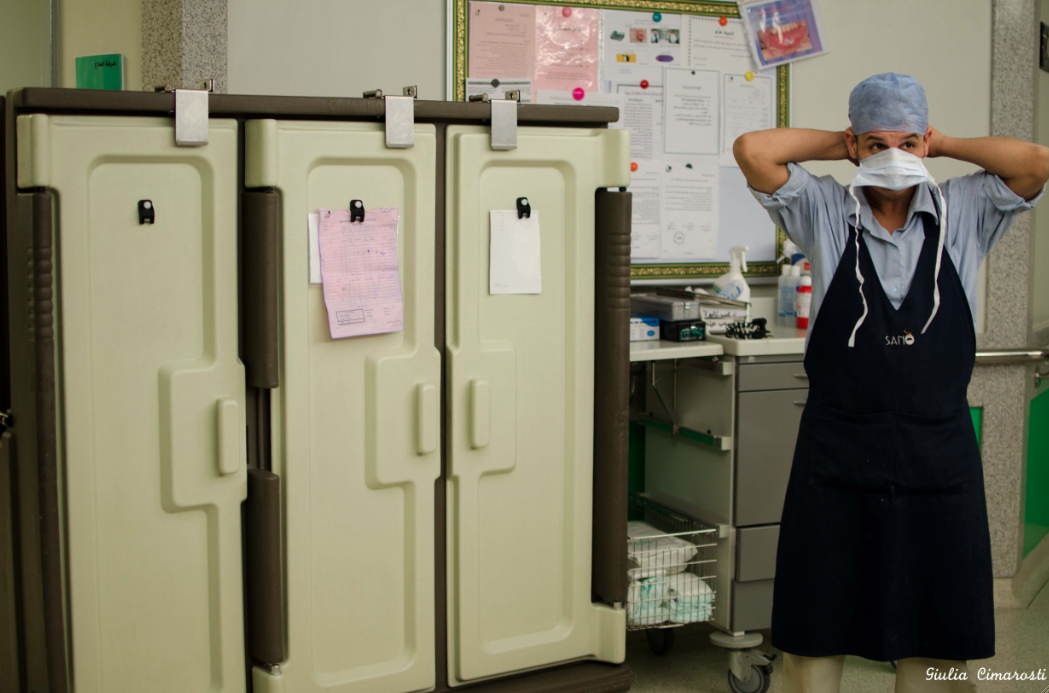 The nurse gets ready to distribute the food.

Ganna in her room

The first girl we met was Ganna. She is a very talkative, playful and smiling girl that posed for photos with pleasure and enjoyed playing with us. 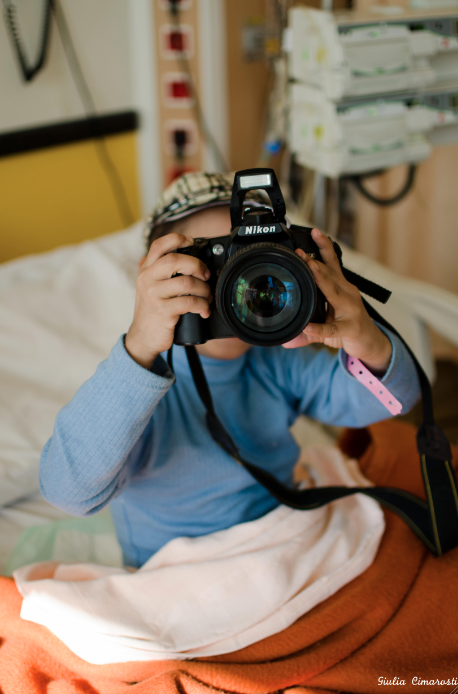 Ganna loves playing with my friend’s camera! Model and photographer… what a smart girl. :)

Then, we moved to another room and we met Mahmoud. He kept telling me I was ugly and my friend was beautiful. Well, fair enough… it’s definitely the “karma” coming back for all the times I said I don’t like children! Getting an “I don’t like you” from a kid you actually like is fair enough, isn’t it? 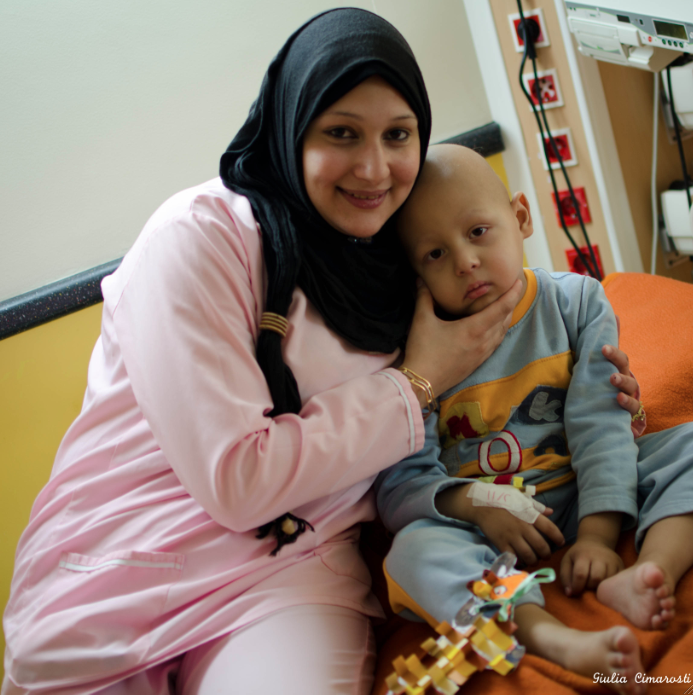 Mahmoud and his mom

Moms are given a pink pijama so that they can be recognized by the staff and children. 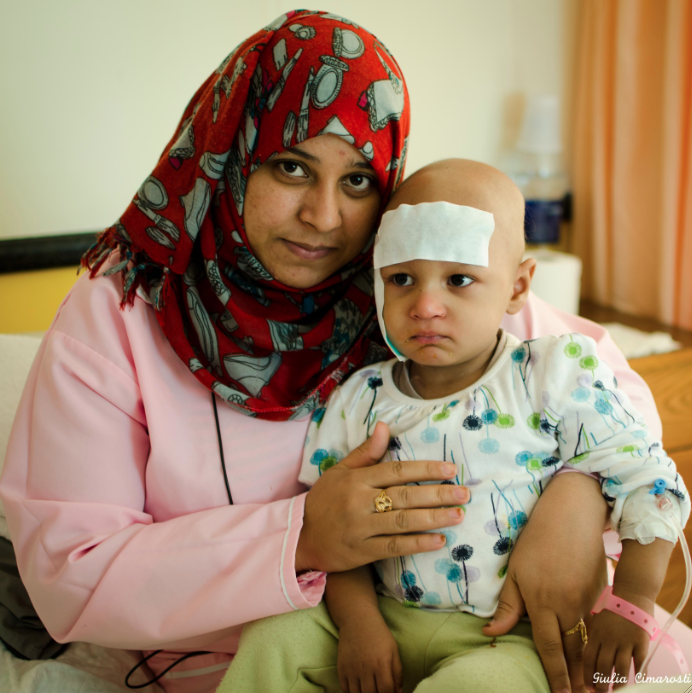 Unfortunately I don’t remember the name of this cute little girl… She was Mahmoud’s room mate. Here she is with her mom.

I was surprised I didn’t feel as bad as I expected when I was actually visiting the hospital. I was so amazed by the children and the fact that they smile and play with you… they kind of end up comforting you. Shouldn’t it be the contrary?

It’s when I left the hospital that I started feeling worse. I just cried looking at the last picture.

I would totally love to work or volunteer for this hospital and I would also donate if I had enough money to make a difference.

I invite you all to check out the Children Cancer Hospital 57357 website: http://beta.57357.com/ and if you can donate please go ahead. If not, I am glad at least I spread the word about this amazing project that deserves to be known internationally.

Please help me spreading the word and let’s hope that they will soon be able to cover the 100% of the cancer cases in Egypt!

Sweet children, great initiative, more places should have hospitals like this..

Oh what a great post. These photos… kill me. They are just so damn sweet. I hate that some children have to suffer from horrible things. I would love to visit this hospital and maybe even help out if I can while I am there. I can’t imagine how hard it is for you to actually see them.

I’ve been many times to that hospital on occasional visits, they’re great, and everyone is smiling. They’re doing their best to help those children. I hope that we can see other-things like that in many other different projects, either inside Egypt or around the world.

Some of the great people I’ve met inside the hospital was Mohamed A. el-Fatah, Ayman Ibrahim & Mohamed Arafat.

What a wonderful post, Giulia. You’ve raised awareness of this wonderful place. I had tears in my eyes reading it.

Everyone should visit a place like this at least once in their lives… it puts everything into perspective. Thanks for reading, Ceri :)

I am from Egypt and I visited the hospital too I was amazed when I went there every thing was available for the children they seemed to be really happy :)

I went there for my school project , first I wasn’t exited about going there for only seeing doctors and the patients but it was really fun! I really wish that every one could go there