The illusion of being able to see everything: that must be what fascinates me so much about islands and peninsulas in general. The idea of a “finite” land, that I can entirely explore. I guess this is one of the main reasons I enjoyed my stay in Gargano, Apulia so much.

Spending 2 months on a promontory (Gargano) was great already, but an archipelagos just a few hours away was something that I couldn’t miss. That’s why I decided to spend one of my (rare) days off on a trip to the Tremiti Islands! 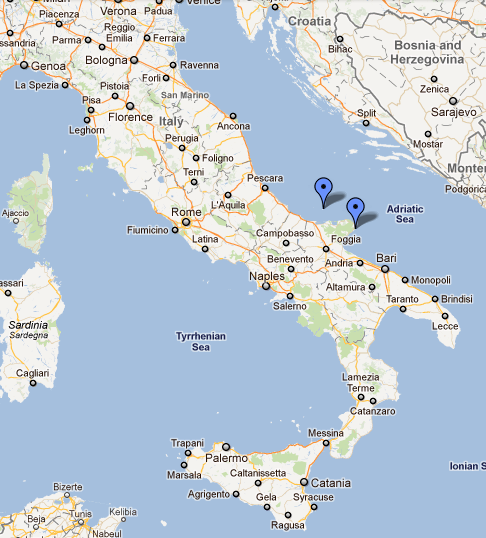 The map shows Italy, the Gargano promontory (my location) and Tremiti Islands

The Tremiti Islands are so called because of their volcanic origin: in fact “Tremiti” refers to “tremor”. Another curious fact is that the archipelagos is an actual “town” in the Foggia province.

My journey started with a 2 hours boat trip from the port of Vieste, on the eastern tip of the Gargano peninsula. That journey itself was beautiful, as it goes all around the Gargano coast, showing beautiful landscapes including the picturesque town of Peschici: 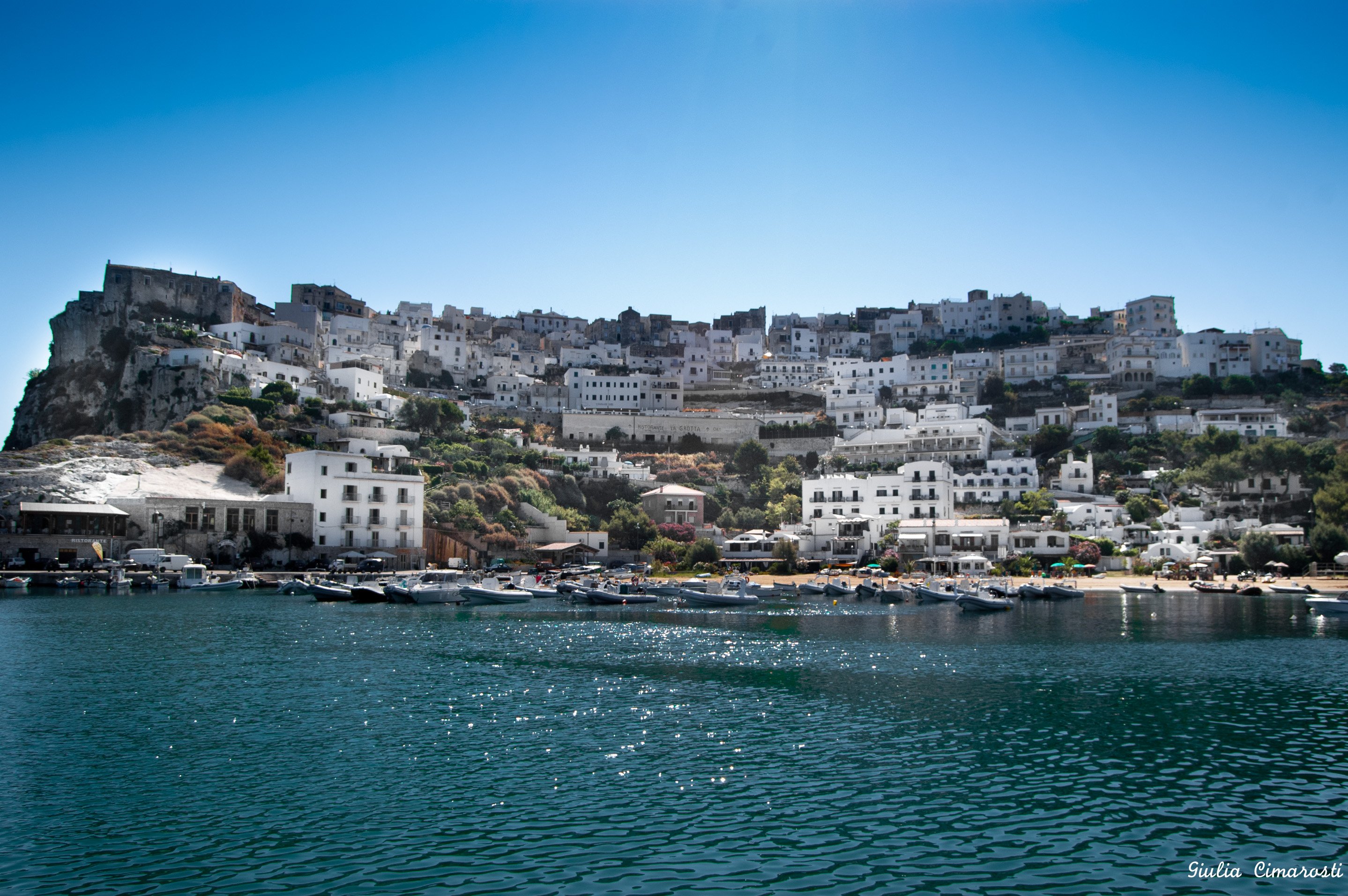 After a while, here they are! Finally approaching Tremiti Islands. 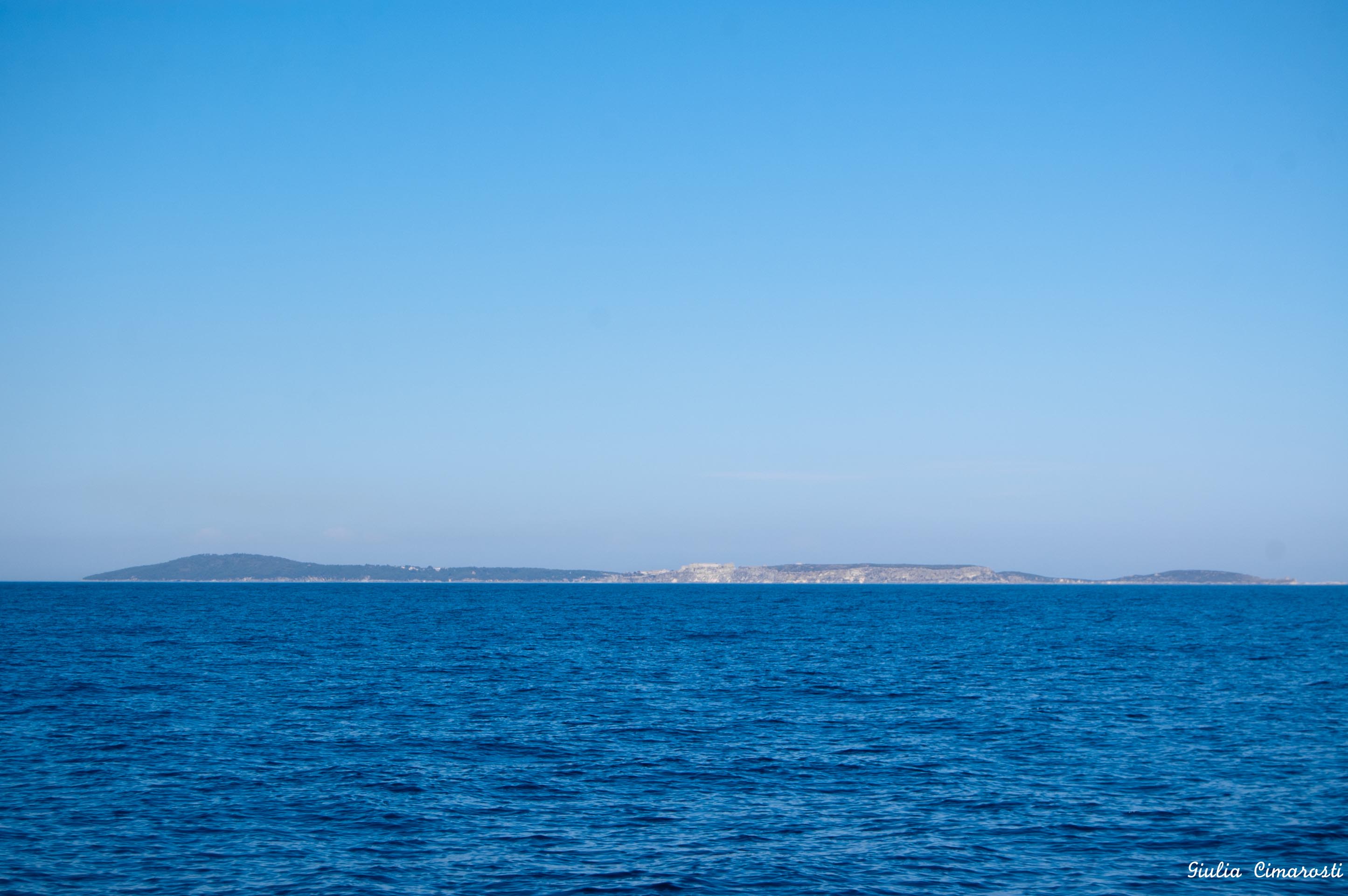 Tremiti Islands as seen from a distance, approaching by boat

There are 5 islands in the archipelagos, but only 2 of them are inhabited.

I arrived to San Nicola Island, had a short swim in the clear water of the island, then decided to take a boat and have the tour of the archipelagos before coming back and see the monastery. 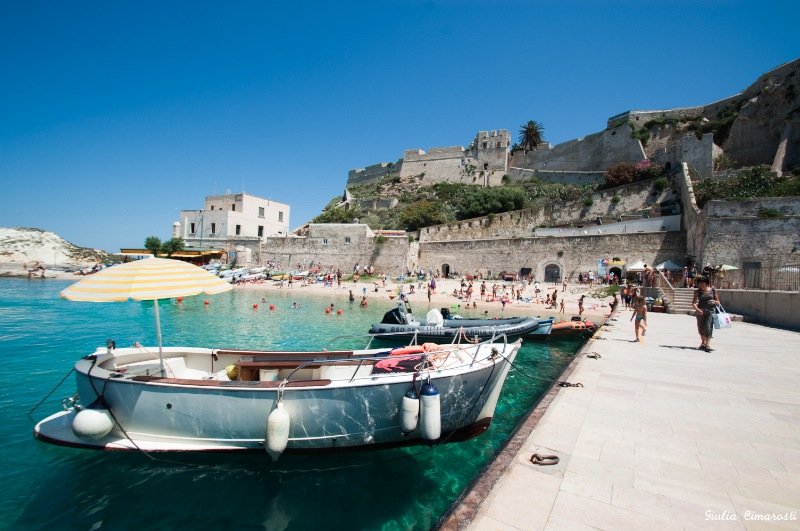 A wooden boat carrying about 50 people took us around the archipelagos, in and out the sea caves, and showed us every island. The water is so clear, and not too deep, so that you can see the seabed very clearly. 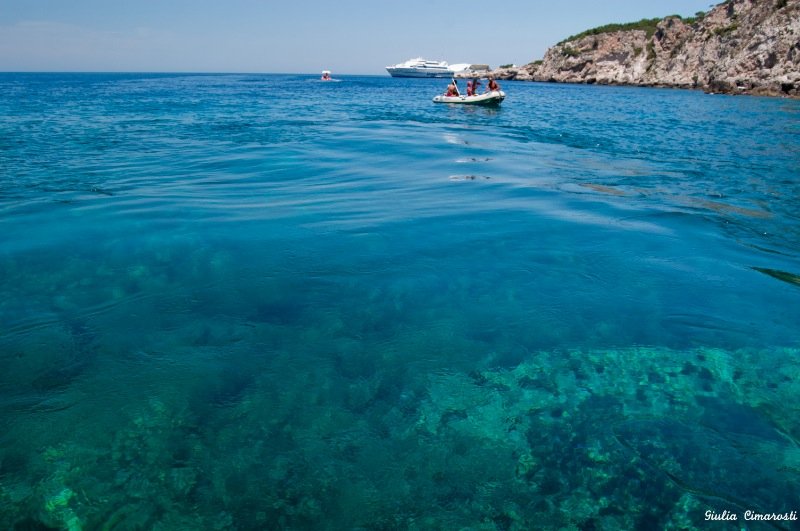 There are so many sea caves on the coasts of these tiny islands, each one with a different name according to its history or shape. For example, I remember the “grotta delle rondinelle” (=cave of the swallows) where the sea swallows go to make their nests.

Inside the caves the light is beautiful and makes the water colored in a bright blue, so clear that you can see the fish underneath even in the dark.

Inside the sea cave, Tremiti: clear water and fish. How beautiful is that?

Other than caves, the rocks also have bizarre shapes and you can see little rock arches and other interesting formations such as “the elephant” – a rock that looks like an elephant drinking from the sea. 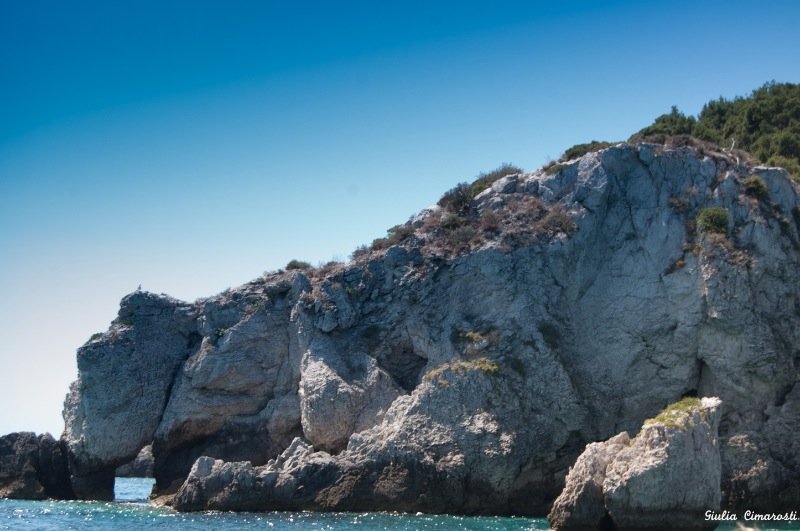 On the way back, I stopped on the San Domino Island to check out the only sand beach in the Tremiti Islands. Man was it crowded! But still beautiful and I took a long swim. In case you want to sunbathe and all, you will probably have to rent a sunbed because there’s no other space to lay on! 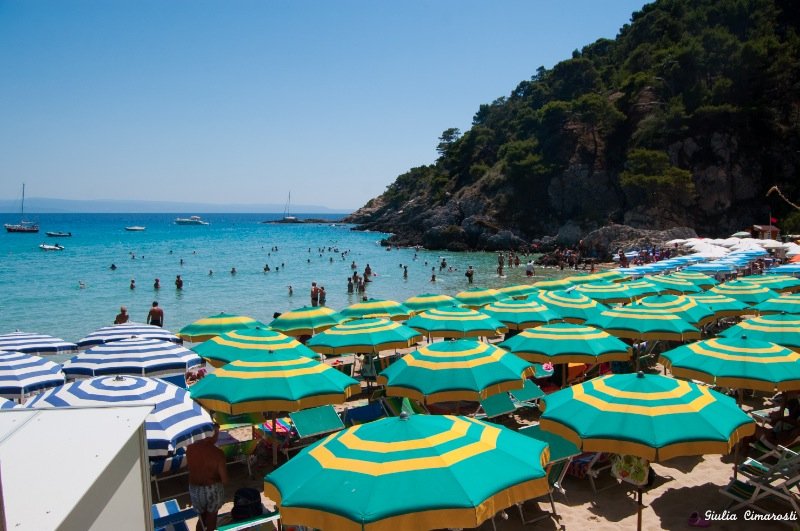 I didn’t have time to sunbathe so I didn’t bother much and moved on to the last (but main) stop of my tour: back to San Nicola Island to climb to the sanctuary and see the archipelagos from above. 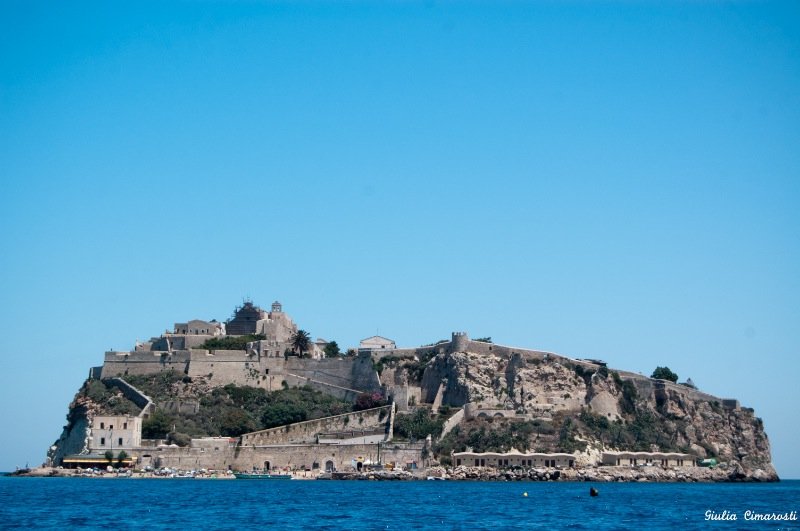 San Nicola Island as seen from the sea

Going all the way up to the sanctuary, called “Santuario di Santa Maria a Mare” (Sanctuary of Saint Mary of the Sea) was not easy: the path is very steep and slippery… and the day was incredibly hot. What I can say is that it’s definitely worth the effort, because you will be rewarded with an amazing view over the islands! 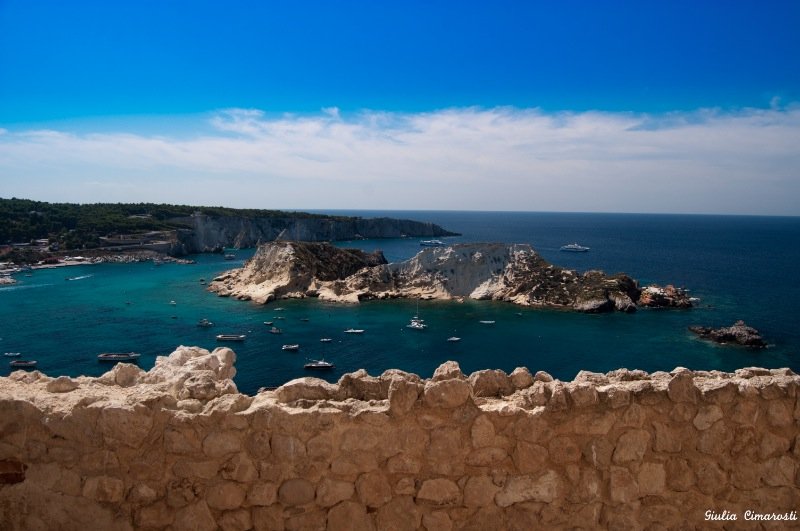 The Tremiti Islands as seen from San Nicola Island

At the very end of the path and on the top of the island is the Sanctuary. Nowadays it is a church, but it used to be a monastery and an abbey throughout history. Unfortunately the facade was under restauration when I was there, but I could take photos of the inside.

Inside the Sanctuary of Santa Maria a Mare

I just had the time to go back to the harbor and the boat back to Vieste (mainland) was ready to go. It was a beautiful, intense day!

I suggest everyone to visit the Tremiti Islands, and here are my tips: 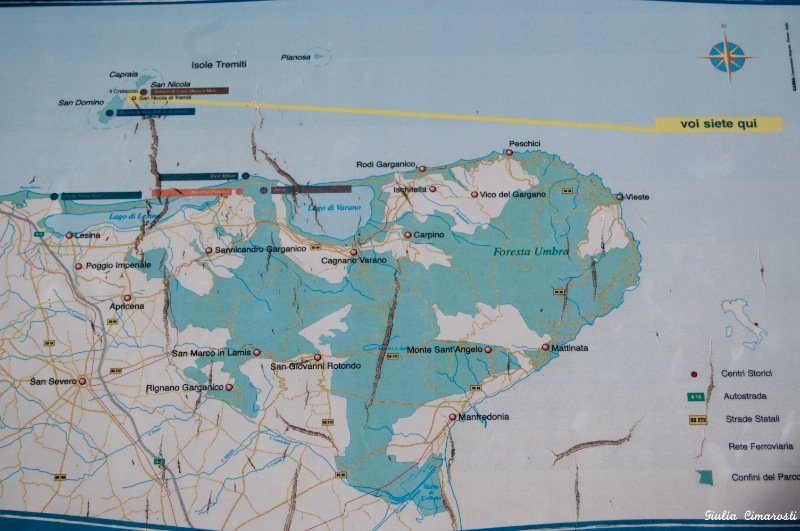 Where are the Tremiti Islands? Follow the yellow sign! (“voi siete qui” meaning “you are here”)
I hope you enjoyed the trip and the photos!
Have you ever been to Tremiti or another Italian archipelagos? Please feel free to share your tips!

Is is absolutely beautiful!!

These islands look so beautiful, I think we have to include them in our next trip to Italy :)

Stunning view of San Nicola Island! Love the rocks, love it all!

This Tremiti Island was really so beautiful, I have to set schedule to visit this island.

It’s really beautiful, I do love that sea cave there so plenty of fishes. I wish I could hang there and do some fishing.

I want to visit this place..Thanks for sharing..

oh my the place is gorgeous!

oh boy, makes me wanna jump off that water, perfect place for a vacation!

Wow, what an incredible place. And so close to you, too. A real place of beauty. That water is like crystal. Simply stunning.

Definitely unexpected, and I loved it! I would go back right now :)