On the other hand though, what I felt and heard about the situation was slightly disappointing.

Based on the talks I had with my friends in Cairo, this is what I realized:

The fact that police is back in the streets is good in a way, but in fact little has changed since the time of Mubarak’s regime: apparently they aren’t do much better than before, in the way they deal with people – no respect, abuse of power, humiliation.

The army (SCAF: Supreme Council of the Armed Forces, leaded by Commander Tantawy) is imposing its rules and democracy has nothing to do with them. After the recent clashes with Coptic Christians they left about 40 people dead and Tantawy’s comment was “we’re not apologizing”. Not exactly what you expect from an illuminated leader.

Presidential elections seem like a mirage: nobody knows exactly when they will be – they say in 2012 but I still didn’t get why Tunisia had its elections and Libya (!!!) will have them soon too, while Egypt is still waiting for good news.
The fact that the Muslim Brotherhood is probably going to win is another story.

What I personally felt is that all that excitement and the positive vibe I was living in just after the Revolution, is gone.

The kiosks selling patriotic gadgets are now just a few and the sellers just sit there lazily without any sign of excitement anymore.
Little demonstrations occur now and then but nothing major. 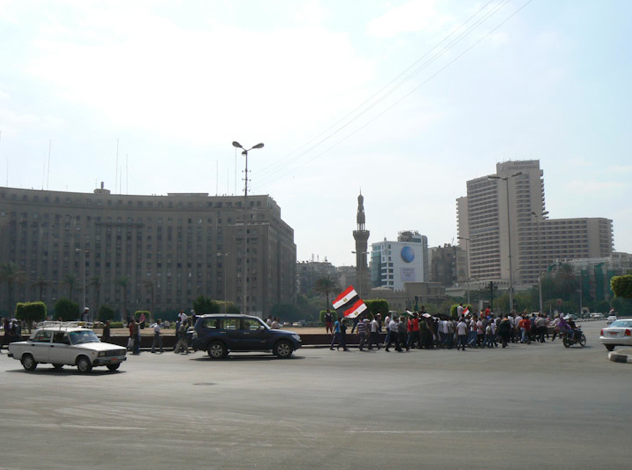 Tahrir Square and a tiny demonstration.

Squads of policemen are standing in front of the Ministries buildings 24/7 and I am not sure if this is relevant but I just don’t like seeing policemen with helmets, shields and sticks around.

Meanwhile, the common idea is that the Army is trying to exasperate people to make them regret they had the revolution. Nobody knows what’s going to happen and in the Army’s plan this situation will lead the population to accept any leader just to have one.

What I heard is that the elections will be held in 3 times – doesn’t this sound fishy? The feeling is that this way they can check the results every time and manipulate the next ones. Well, this might just be another conspiracy theory but you’re never suspicious enough in situations like this.

Someone else said that this will lead to the “Second Revolution – the bloody one“. The thought is scary enough. Basically someone is waiting to see how far the SCAF goes and if it’s the case then the ‘second revolution’ will be against the army itself. Not sure how “mainstream” or “indie” this philosophy is, but it’s interesting to listen to different people’s points of view.

Some friends warned me that nowadays it’s not as safe as before being out too late in the night – apparently robs and thievery have increased drastically after the revolution, because of the financial crisis (lack of tourism etc.) and subsequent poverty. I had no problems at all during my stay though, even if I was out until late at night. The thing is, before the revolution this kind of crimes were almost inexistent and now they’re increasing but Egypt is still definitely safer than other countries.

All of the above honestly affected my mood during my stay, this time. Even before talking to my friends I could feel something in the air and what I was told didn’t make it any better.

Egypt, I am sorry.

*quick update* I ran into a protest today – or better, police literally ran into me while I was going out of a building tonight. There was a demonstration and once again I found myself in the middle of police running after people. Reminded me of January 25th. Minus the excitement. Me no like.

*quick update #2* I saw a guy attempting to set himself on fire on Qasr el Einy Street today, in front of the Parliament. Dislike, dislike. 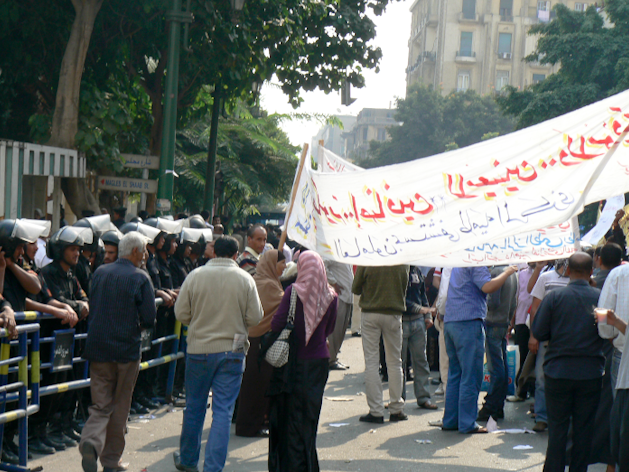 The protest where I saw the guy trying to set himself on fire.

Whoa, Giulia, this is a powerful post. And informative. You really gave me a great look at what’s going on in Cairo. I can’t believe you saw a guy trying to set himself on fire. Here in Dahab all is peaceful as usual. Thank God. I hope your time in Egypt this time around doesn’t hurt your affections for it. Knowing you, though, you’ll always love Egypt.

I am glad Egypt is going back to Normalcy. Do they have a new government

It’s not tough ruling the precise post when you want it. But finding a site where you are able to get huge information on a broad selection of matter is a face up to… Thanks for giving out such pleasant information!

Thank you for writing this Giulia. You really don’t hear much on Egypt these days and it is nice to hear what is going on for sure.

Wow thank you so much for writing this post. I honestly had not heard much about Egypt recently… of course all you hear about on the news is about other horrible things and big protest that are now going on around the world. The attention has gone off Egypt, but I am glad you are putting the spotlight back on it with this post. I will be there shortly… I promise I will get to Egypt. I am traveling so slow and can’t help it. Everything you wrote about Egypt made me kind of sad… I wanna see change for this country and I wanna see it done right and soon. It makes me so mad how this world works… I mean in reality the West doesn’t want these countries to have democracies or ever move up. I’ll stop there because that is a whole other can of worms.

It’s not hard finding the right post when you need it. But finding a site where you can get great information on a wide variety of topics is a challenge.. Thanks for sharing such a nice information!

I hope you continue to cover the progress, yours is one of the few voices I trust to be experienced, balanced and fair.