Same same but different: cave churches around the world

One of the greatest things about traveling is discovering the differences and sometimes the oddities of other places, right?

Sometimes though, you find similarities as well, even when you’re miles away from your Country and you didn’t expect it!

This is what happened to me with “cave churches”: churches and cathedrals dig in the rock. 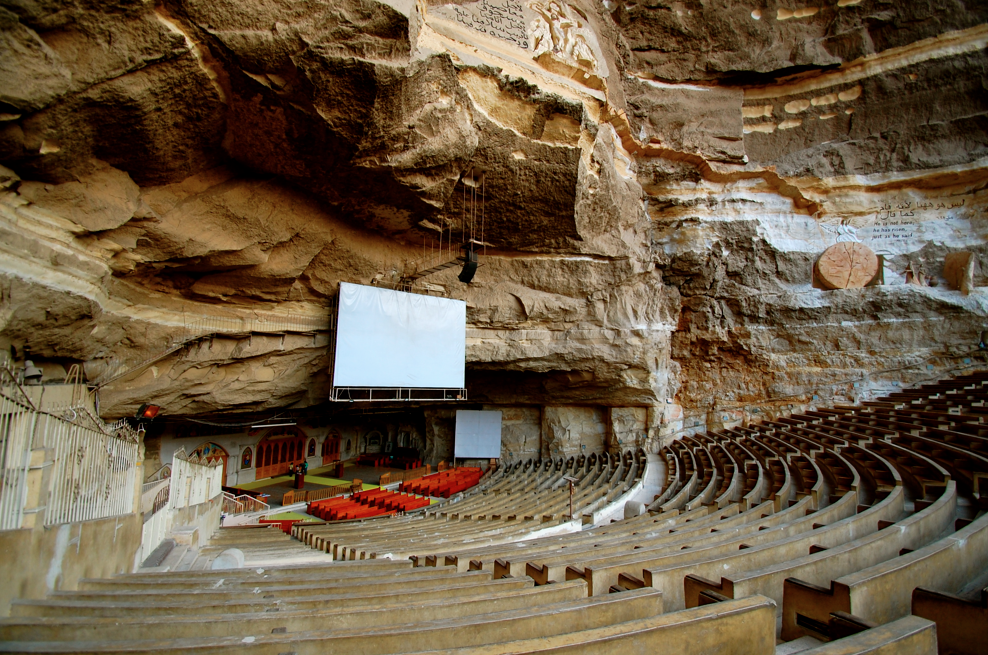 This church is incredible: first of all, it’s the biggest church in the Middle East with 15,000 seatings, but I found just a few people (except Egyptians) that knew about it, and even less people (including Egyptians) that visited it.

The reason why not everyone wants/manages to visit is that in order to get to this church you have to cross the whole “Garbage City” area of Cairo – as you might have guessed, it’s an extremely poor area, where people literally live in the trash, dividing it for recycle. The living conditions are very poor, the smell itself is challenging, and it’s very easy to get lost.

People living there are the so called “zebbaleen“, coming from “zebbela” (=trash, in Arabic). They are all Christians.

But then you get to the mountain where the church is dug, and it leaves you breathless. It’s so huge, and so beautiful. When you cross the gates, you suddenly forget the journey and find yourself in a clean and peaceful environment.

What impressed me most about this church was the echo of the Muslim prayer coming from the nearby mosque, during the mess. The Arabic writings on the walls, that looked kind of weird at first sight – I was so used to associate this language with Islam, but of course this was wrong.

Speaking about Egypt and Coptic Christians, and referring to the events of 2 days ago (click here if you don’t know about it), I want to express my grief for the people who died in the clashes, and for no reason. May your souls rest in peace.

During my 2 months stay in the Apulia region, I didn’t know there was a cave church nearby until the last days, and I rushed to have a look at it! Unfortunately taking photos inside was forbidden. But I took a (bad) photo anyway, just before being scolded by a monk, ahem. 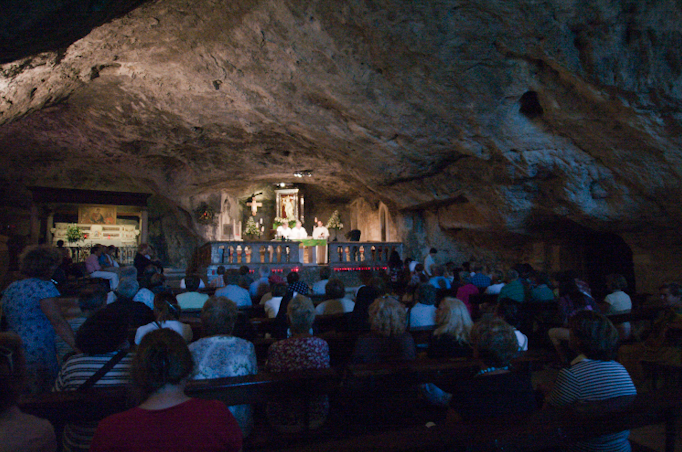 The sanctuary is dedicated to Archangel Michael, because it’s believed that he appeared several times in the area.

For some reason, the mass I bumped into was being celebrated in Russian. This sanctuary is a very popular destination for pilgrimages, but I didn’t imagine there were masses in every language! Cool. 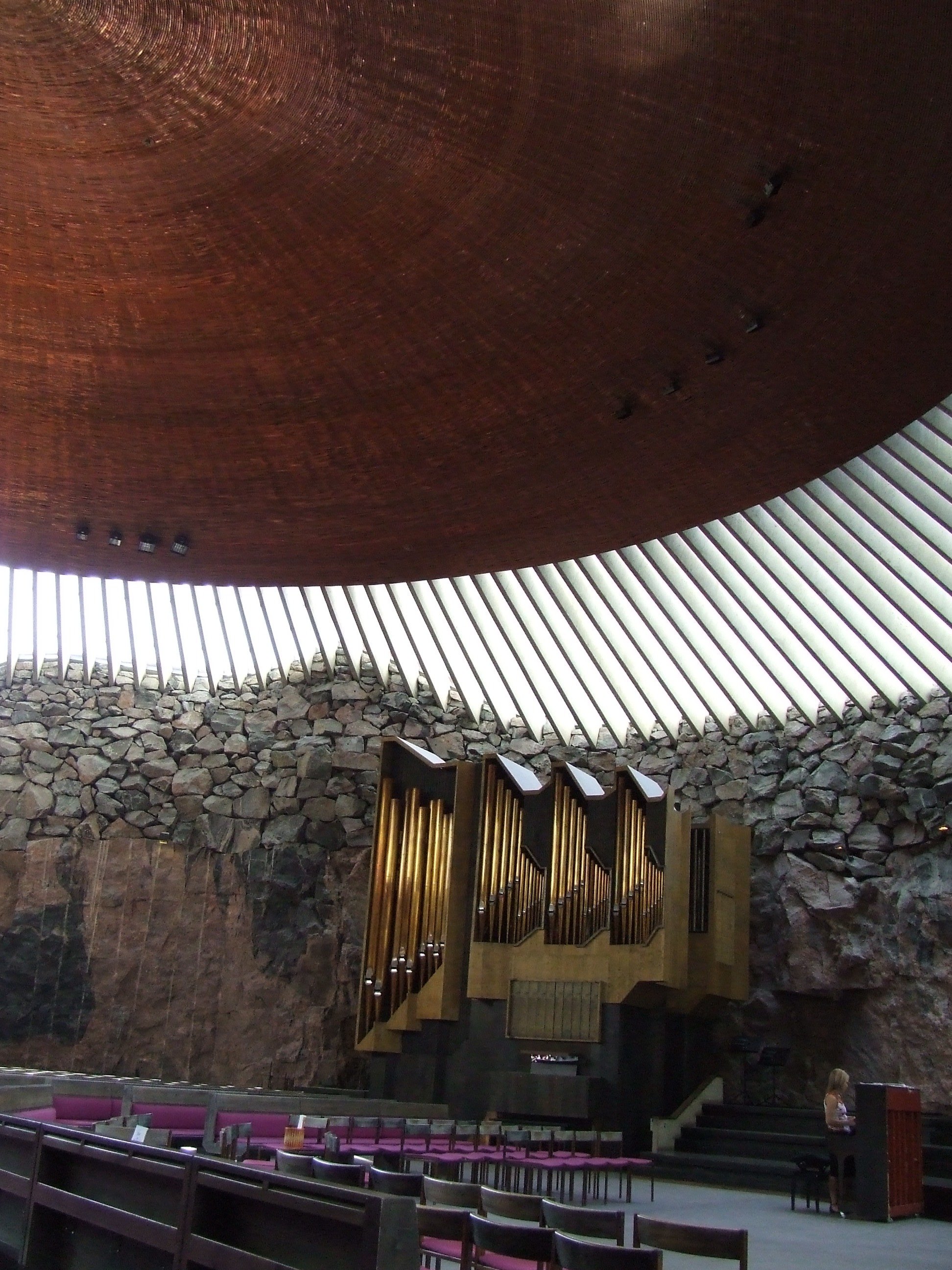 I’ve been to Helsinki but unfortunately I didn’t visit that church. Serena did, and here is what she says about it:

“The Church is modern and full of light. The fact that it is dug in the rock doesn’t make it cold and gloomy – on the contrary the ceiling made in copper and the big round window enlighten the inside gracefully. This church is different from the others, and a watchful eye will notice that there are no columns, no paintings, no frills, no gold. It’s a “church for the soul“, not for ostentation and opulence.  The rough, dark rock, the seatings covered in purple velvet, the black piano and the humble but large organ make this a place of peace and silence, rest and prayer. A minimal place that gives space to the power of prayer and to the perfection of acoustics. Prayers and concerts alternate in a perfect balance“.

This kind of places can tell a lot about the culture of a place. What I like about cave churches is that they are very simple, without too many decorations, statues and paintings. It’s all about the spirituality of the place. They make you think about the effort of building them, and bring your attention to faith and belief, not to what’s materially inside the church.

I discovered these three similar places by chance, in very different areas: Italy, Middle East, Northern Europe. I am sure there are more out there, so if you know about any other cave church around the world please let me know!

Oh wow this is crazy… I have never seen anything like that. I will def have to check this out while I am there. I also wanna visit the garbage city. Can you visit it? I wanted to visit the one in Nicaragua, but was to scared because it is dangerous.

Of course you can visit Garbage City, it’s not dangerous. Anyway my advice is to go by car (there are tours, or you can go with a taxi or a friend who has a car!) because it’s not easy to find the way!
Don’t miss it. That’s what you call an experience. :)

I totally saw a documentary about the garbage city in Egypt and about the poor people who had to live right there in the rubbish. There was also talk about cave churches on that and they explained how they were initially built as a secret because of such ferocious Muslim culture.

Uhm, well I didn’t know they built it there because of the “ferocious Muslim culture”. I guess I need some documentation!
Anyway, it’s a very interesting area to visit, and I’m glad they made documentaries about it. Cairo is not just about the Pyramids!

I saw some pretty cool cave churches when I was traveling around central Turkey a few years back. They were located in the Cappadocia. Check them out!

Thanks Tim! I’ve never been to Turkey but I’ll have to check out the cave churches when I go! Not that I am religious or anything, but now it’s starting to be some kind of collection :)

Very interesting! You should definitely go to Cappadocia – loads of caves there, including hotels. We slept in one in Goreme. But mind you, the cave churches in the Goreme open air musem, as you can expect, are not used for religious functions.

This is really an awesome recap. Cave church, how fascinating! Now I think of it, I saw many cave temples around Korea, and Asia. Cave is some what perfect place to meditating and praying !

Its totally awesome..that cairo cave church snap left me speechless…good you got a chance to see that…..well,that russion mass is also bit strange….but ofcourse for good.

Oh it’s amazing. I have never heard about cave church. I want to visit that place sometime.

[…] stop, on Travel Reportage, Same same but different: cave churches around the world. Interesting Cave Church photos. Now I think of it, I don’t think I’ve ever been to […]

[…] to visit “Garbage City”. I had never heard of it until my friend Giulia wrote a post “Same same but different: cave churches around the world” in it she mentions the beautiful cave church that is only found after crossing “Garbage […]

Thanks for the post.. I love the Finish one :-)