My photos banned from exhibit. Here they are

As some of you may know, as I stated the other day on my Facebook page, I was supposed to have my photos featured at an exhibit yesterday, but well, it didn’t end up this way.

Some history: I had a “Reportage Photography Course” in Genoa (Italy) on June. The photos by me and the other photographers who took part in the course are being shown at the International Science Festival (Festival della Scienza) on Oct/Nov 2011. Yesterday there was a first exhibit… and my photos weren’t there.

They said the photo project wasn’t suitable to the audience because of the political content. Right, but the project was about “Reportage” so I guess almost everything suits the topic, even the most extreme shot.

Anyway, I’m posting those photos here on my blog, because I like them and I want to show them to as many people as possible! Any comment is more than welcome. Please feel free to share your thoughts.

NOTE: As I chose the theme “Writings on Genoa’s walls” and they are in Italian, each photo comes with a translation and explanation.

Writings on the walls of my City. 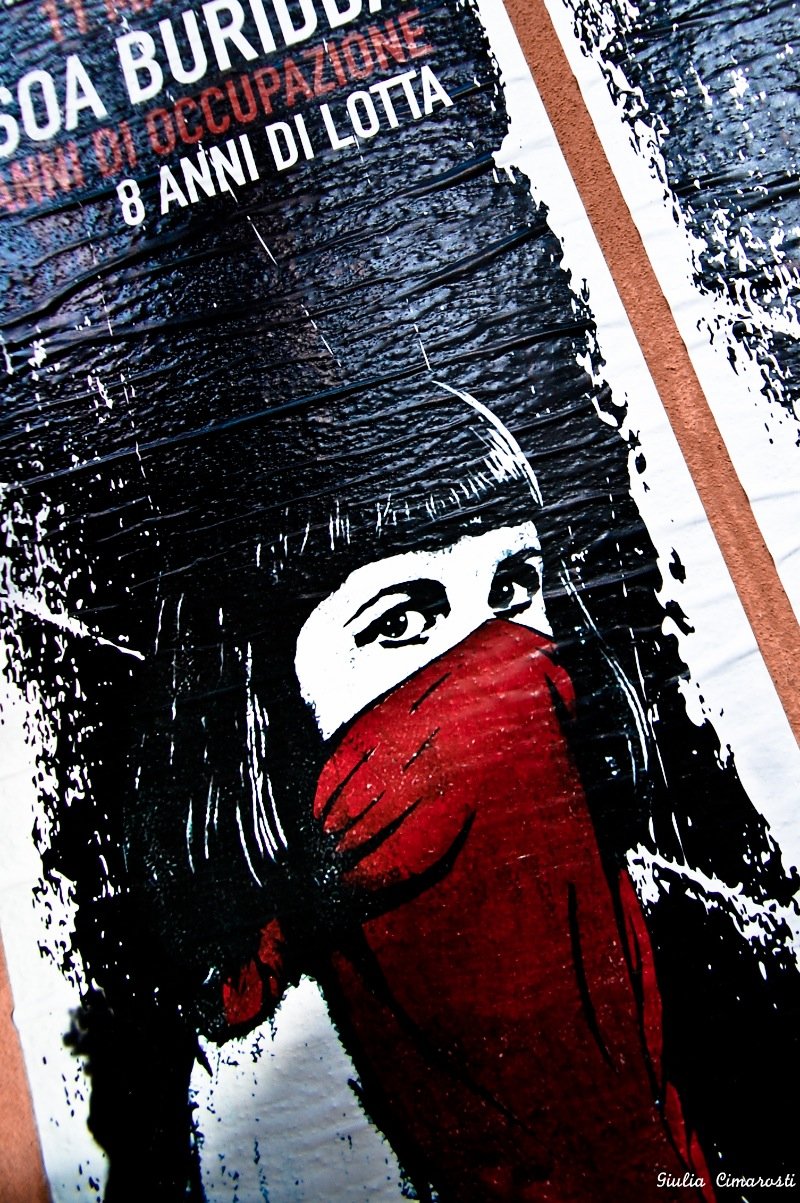 This sign says “8 years of fight” and it belongs to a local squat. It’s obviously political but what I liked about it were the girl’s eyes, that look like they’re staring at you above the red scarf. 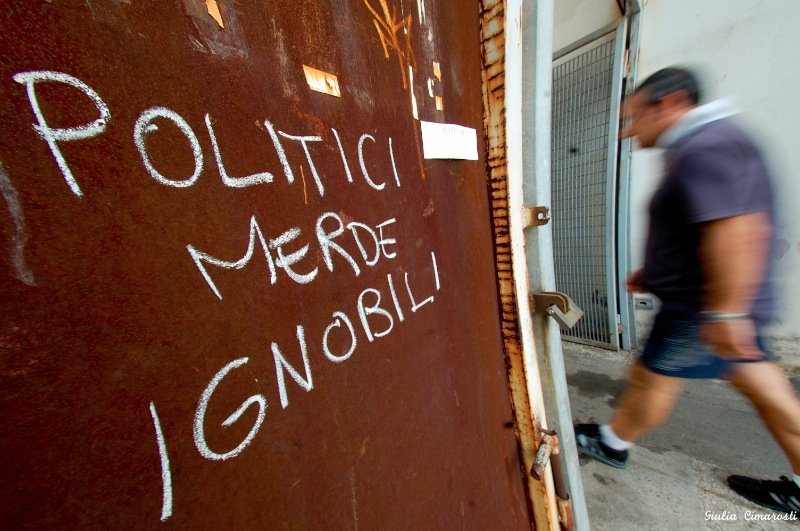 Okay, okay, this is pretty hardcore. It says “Politicians are vile shits“. And I love this photo. ’nuff said. 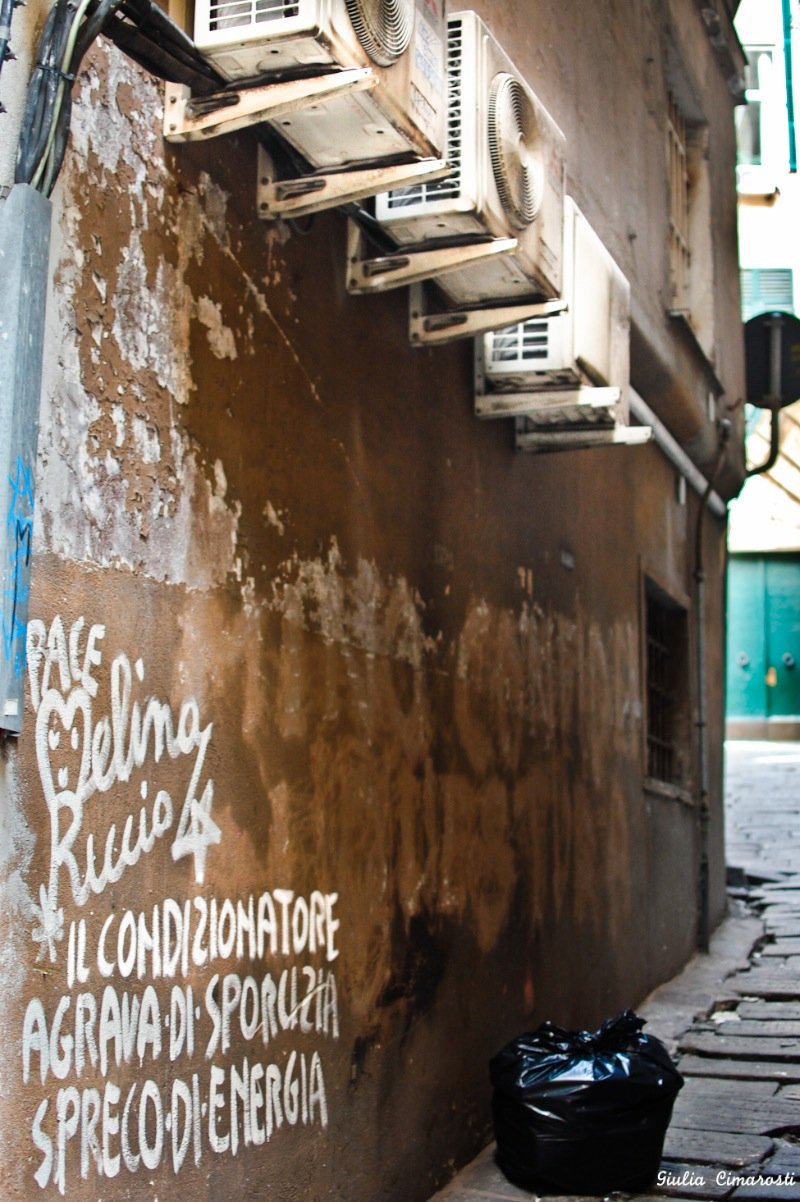 This one deserves a little more explanation. Melina Riccio (look at her funny signature!) is the name of a weirdo woman that spends her time writing on Genoa’s walls. She writes and talks in rhymes (!!!), and she’s quite popular here and around Italy too.

In the photo above, she wrote “A/C causes dirt and wastes energy” – she’s not wrong anyway. I shot this photo as I found it ironic, being a bunch of A/C engines above the writing, and a garbage bag just in front of it. 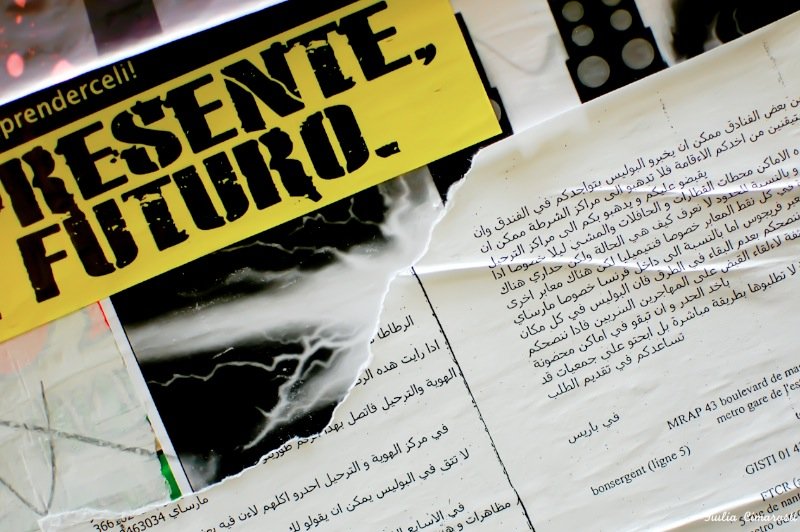 More posters on the walls of the historical center in Genoa. I liked this one because the sign on the left says “Present and Future“, and because it’s ripped it shows the writings behind it, in Arabic. I thought this was a nice metaphor of the great phenomenon of immigration in Genoa… and the city’s future. 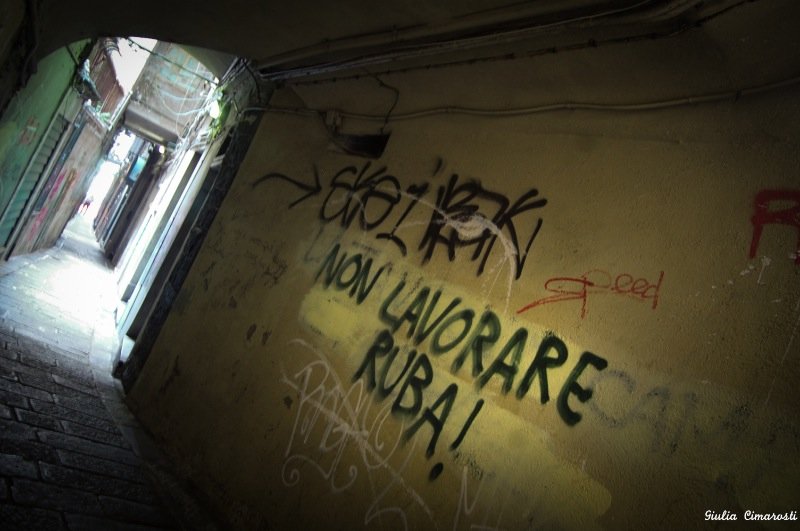 “Don’t work, Steal!” – Nice shortcut to survive. I have no idea who might have written this, probably some squat but I’m not sure. I liked this writing in a dark alley, a shortcut to a main street itself (see light at the bottom). Another nice metaphor. 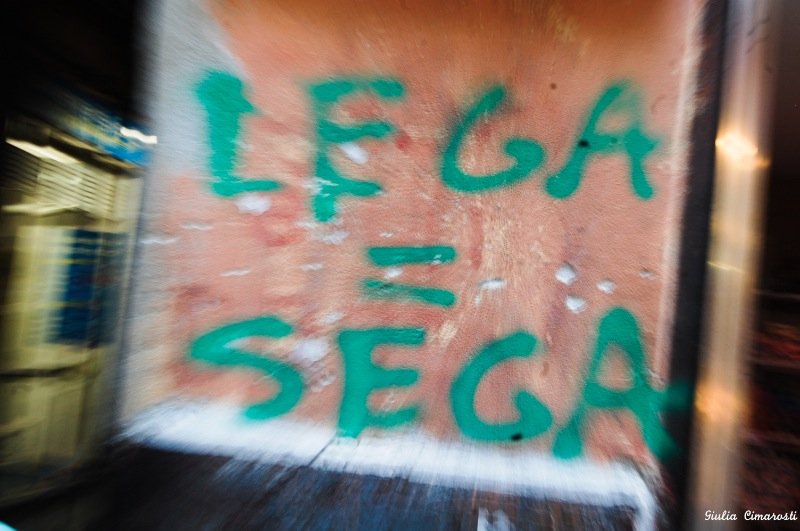 “Lega=Sega“. The “Lega” is an Italian political party. Its full name is “Lega Nord” and it basically wants to divide Italy in two – they hate people from the South. Whatever.

“Sega” can translate with “assholes” to make it easy. But of course the funny fact was the rhyme… 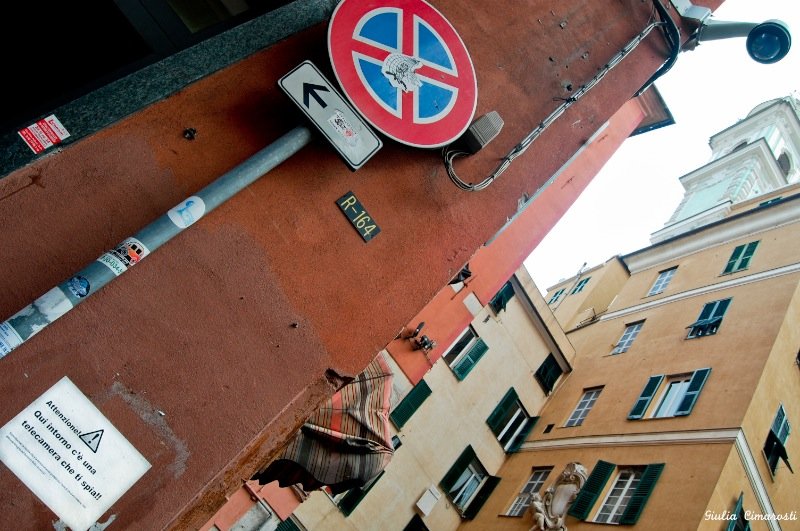 “Warning! There’s a camera spying you” – Recently some cams have been installed in the historical center of Genoa, in order to keep the area safe (or at least this is what they say). Not a great shot I know, but the sign and the camera above make sense enough.

So these were my controversial photos… what do you think? Hope you enjoyed the alternative tour of Genoa in the meantime! 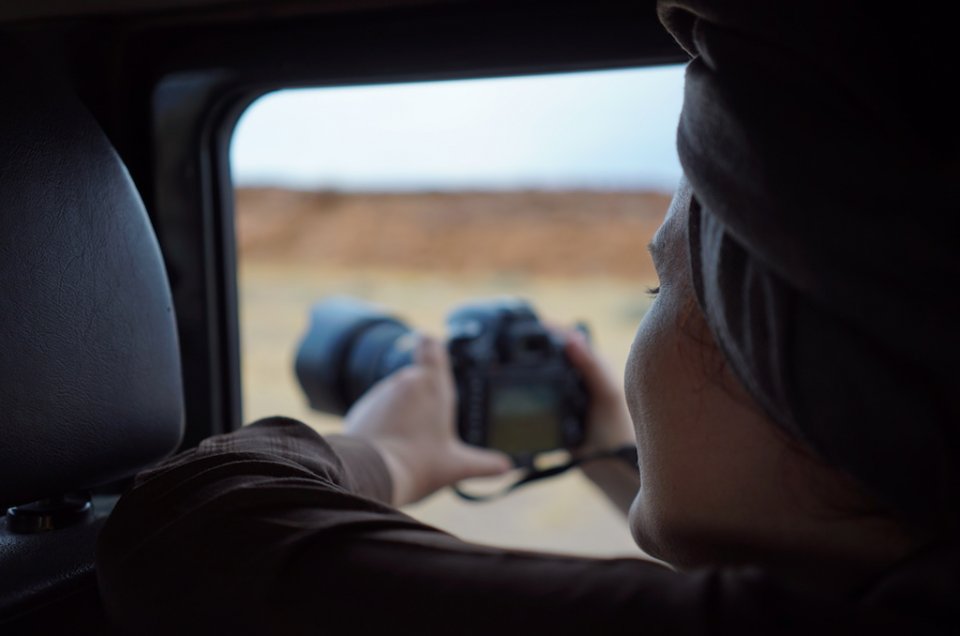 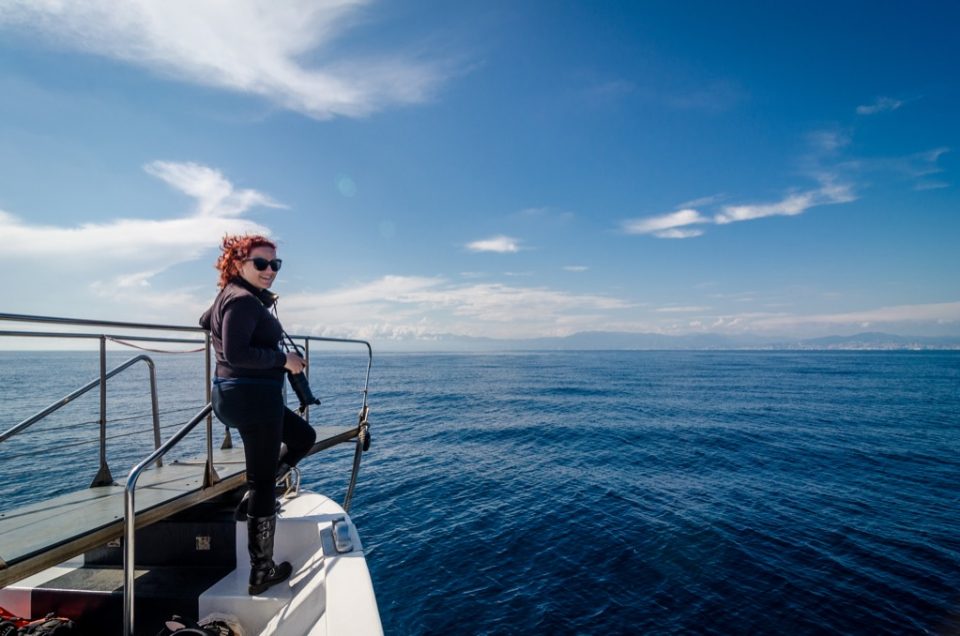 I love the camera shot, it’s super artistic. I have to say that political or not, many of these issues are real and therefore shouldn’t be banned. However, if it was an Italian exhibit I could understand if they didn’t want slander against the Italian government (and I’m only speaking from very little experience living in Florence and understanding about half of what was happening).

You’re photos would deserve to be in any exhibit but at least you know here people appreciate them!

It’s hard to believe it happened from your class. I thought you submitted your photo to some exhibit.
I liked your photos and the signs were not made by you, you were simply ‘report’ it like you suppose to. Hm, I’m sorry about the trouble and again, like the photos!

I’m with Annie. These pictures are very real and should have been shown. You captured a political climate that would have been otherwise ignored and for that alone it is important.

It’s ironic that in our “free speech” and “modern” societies, we still have things getting banned and censored. Thankfully there’s the Internet. :)

Nice pics, I don’t think they are too controversial, at least not compared to the situation that our political class is creating, that it’s probably going to end up in civil war.

I like them; some were even funny (at least to me). And maybe that’s because as an American I don’t truly understand the political issues in Italy. Your photos actually bring light to it. These signs are already out in public around town, I’m surprised they’re banned as its really silly. Well, I say, good job Giulia!

Wow, what ever happened to freedom of speech! I think your photos are very powerful but certainly not ‘controversial’ enough to warrant being banned from the show. To me, censorship is the more controversial topic. Glad that you are getting still getting your photos out there though.

I am a big fan of graffiti/ street art, so I would definitely include these photos in an exhibit…. but apparently, nobody asked my opinion for this exhibit.

It really frustrates me when people are ruled by being too P.C. and can’t bear to put themselves out there and show ‘truth’ because they’re afraid of being too controversial. I don’t think your photos are too political at all. x

That’s shocking that they censored you. I think the subject of your reportage is interesting in many ways and in my opinion reportages should touch on controversial themes, and be thought-provoking… By the way, it’s funny that I was thinking of a similar project here the other day in Siracusa, Sicily, where I was born and where I’m currently living after my RTW. Sicilians love to write on the walls of their cities, including monuments unfortunately, about almost anything from politics to love…

No doubt that picture is worth 1000 words, the Picture speaks for itself. But we shouldn’t forget that beauty lies in the eyes of beholder. For someone it could be a mess while other can figure out a master piece using digital camera with in that, it all depends on the perception.

I totally agree with Francis Tapon, some of the sensitive issues are always tried to suppress but no worries till we have internet. i would really appreciate for the pics… i loved it.

good post. i like the pictures. i love the freedom of them. i wouldn’t say that i agree with vandalism BUT i would say that i can appreciate rebellion and the messages that people were trying to get across. again, awesome post!!!

Shopify is one of the most popular eCommerce platforms to create an online store and retail point of sale. Nowadays almost 100,000 merchants from 175 countries worldwide are using Shopify for smooth handling of their online Stores. To start a new business online or to run an existing one smoothly you can hire a freelancer Shopify expert to ensure your business volume growth with proper maintenance of your store.
Click here best psd to shopify services