All around Singapore in 7 hours!

View Singapore – Round Island in a larger map

It’s been a month since I left to Singapore, but then with all that happened in Cairo I had other stuff to write about. Now, I honestly want to think about something else – in the meantime I roughly now when I’m going back and have some plans: I will keep you updated!
As I previously told you on my Singapore Photo Essay, I enjoyed the City but couldn’t wait to see what was outside of it.

I couldn’t find much authentic spots or cultural sites in Singapore – yes, there are temples, mosques etc, but everything is so new and modern! I wanted some history. I must be spoiled since I’m Italian? Maybe!

So on the last day of my 1 week stay I decided to invest around S$70 (about €50) for an organized tour of Singapore. It was called “Round Island” and the Tour Operator is “Tour East” – nice word pun, by the way :) – and included a Chinese lunch.

I joined a small group of people (all families and couples, and I was alone, felt a bit weird but… whatever!) and around 9 am in the morning we left the center of Singapore City, heading west.

The first stop was the Haw Par Villa. What I remember about it is that it belonged to the family that created the “Tiger Balm“, something that I always had at home! 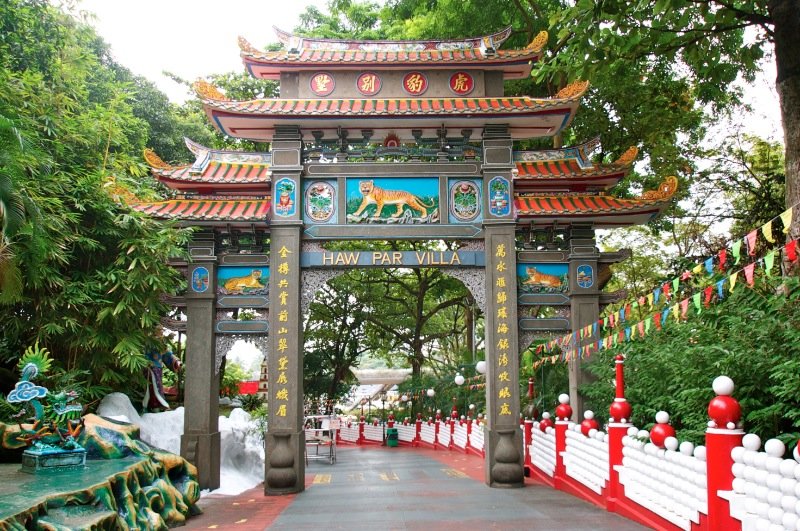 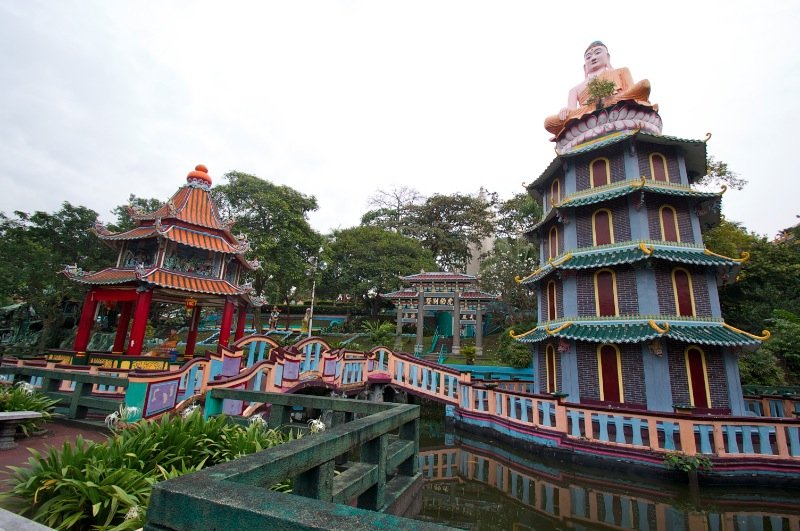 The villa and the garden are a Chinese mythological theme park, where the traditional “Chinese Hell” is represented. Gross! But effective I guess. 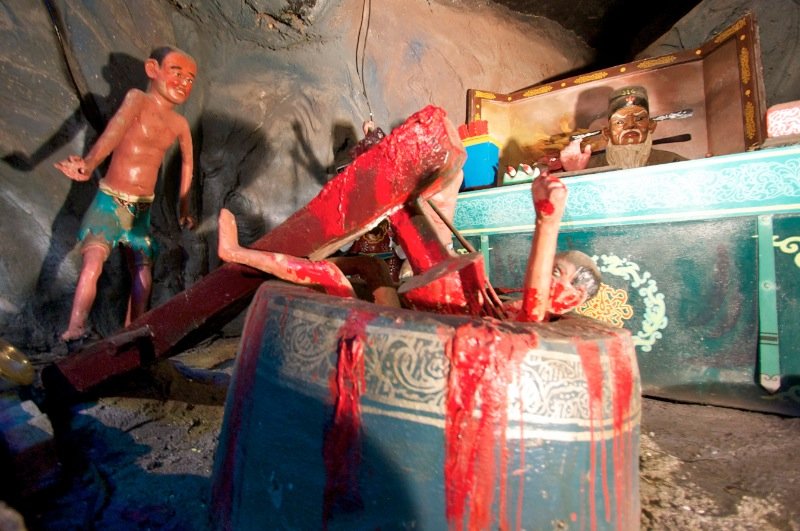 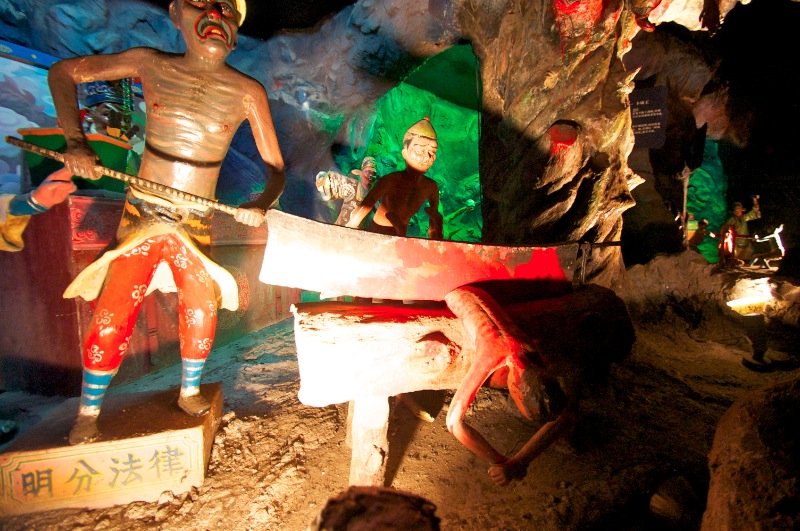 I sigh with relief. Finally I could see some culture – everything was renewed and didn’t really look ancient, but at least it was not another shopping mall with brands in block capitals and freaking out shopaholics.

When I am on an organized tour, or anyway on any bus that takes me across a country I don’t know, I love to just enjoy the journey and look outside of the window. On the way to the next step (the Kranji War Memorial) I wished to find myself in the wild equatorial forest or at least to see some nature. Yes, there was a lot of green but the highways and little (modern) towns we encountered on the way screw it all up a little bit.

Something that really aroused my interest were the tropical fish farmings: I am an aquarium lover and once owned 3 tanks – had to give up to travel, but when I’ll settle down (when? Don’t know) I will finally have a biiiiig tank again : )

So we went up all the way on the western coast of Singapore, and when we reached the northern tip, we crossed a bridge (Kranji Way)  from which we saw Malesia on the other side of the strait. What an inviting sight! But hold on Giulia, next time : ) 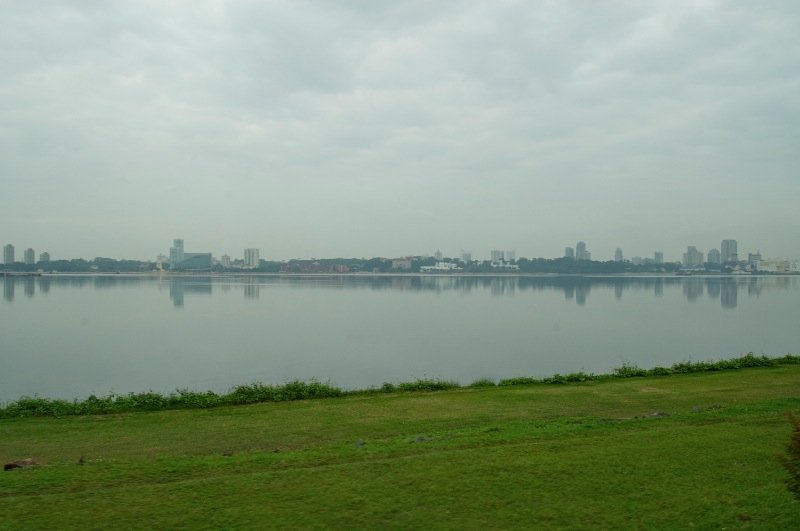 Finally we got to the Kranji WW2 Memorial. This is a cemetery for the soldiers who died during the Japanese occupation of Singapore, and it’s a very touching place. I personally knew nothing about what happened there, as the history they teach us in school is Europe-centered. I was very touched by the histories that our guide told us. I tried to take some pictures that could express the feeling I had. 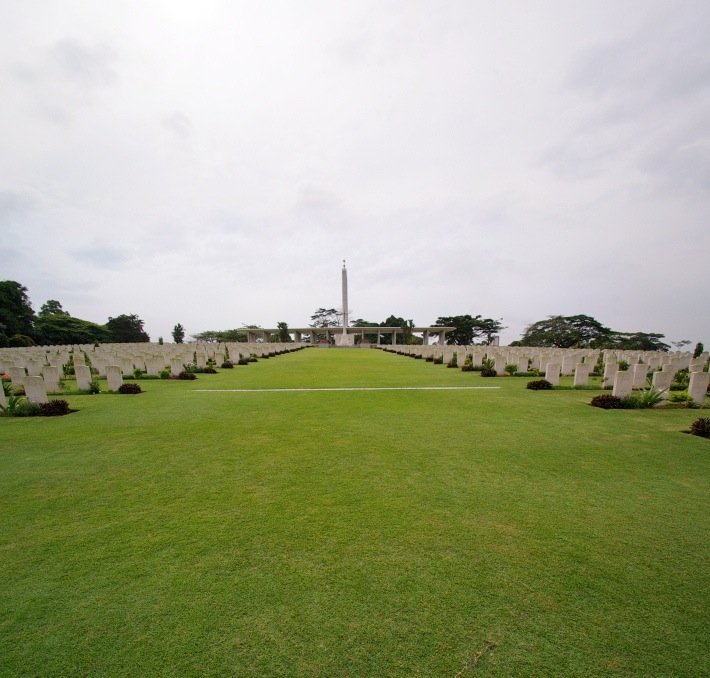 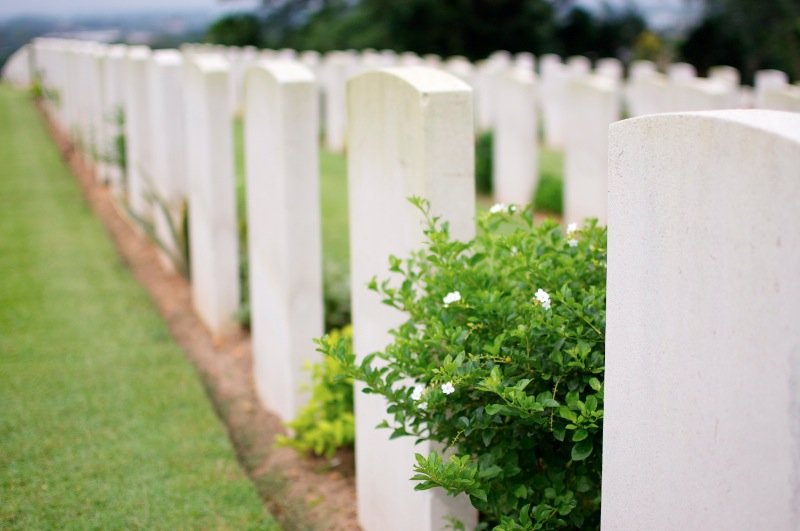 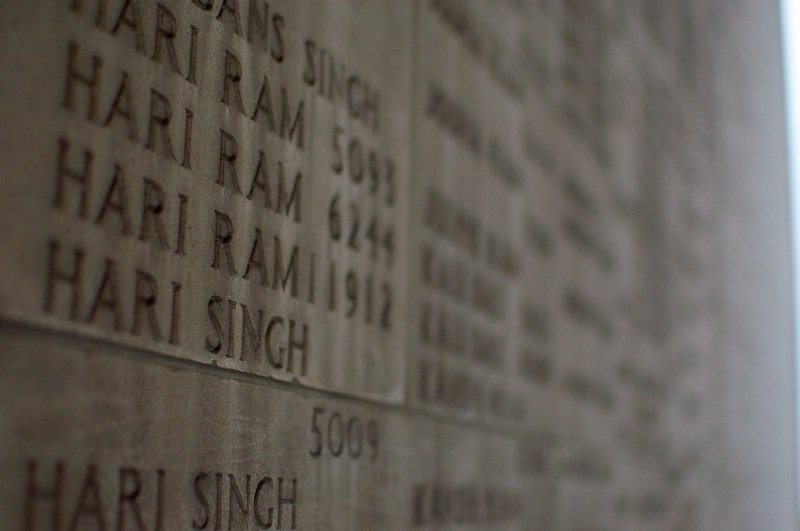 Next stop was the Kong Meng San Phor Kark See Temple, better known as The Bright Hill Temple. It’s the largest Buddhist Temple in Singapore. The new prayer hall contains a huge Buddha statue. The statue is beautiful… Too bad this hall is so new and modern, that it reminded me …of a gym. (Heretical Giulia) 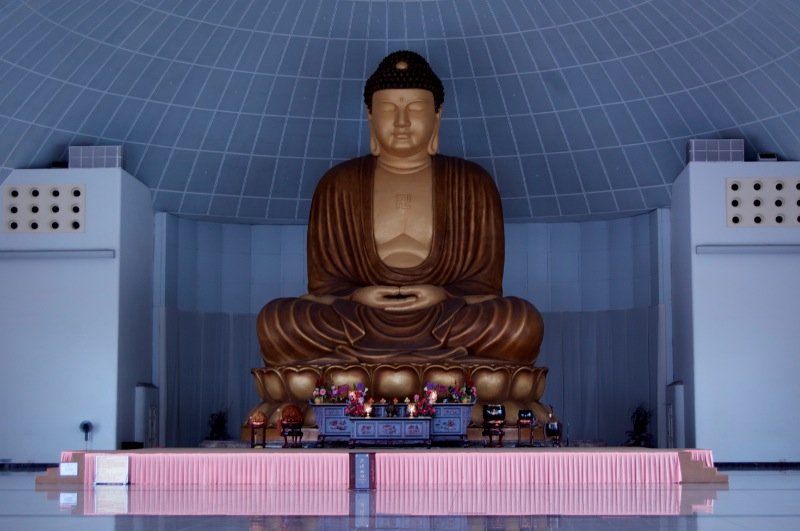 The rest of the temple is really lovely and colorful. It gave me a feeling of great peace. 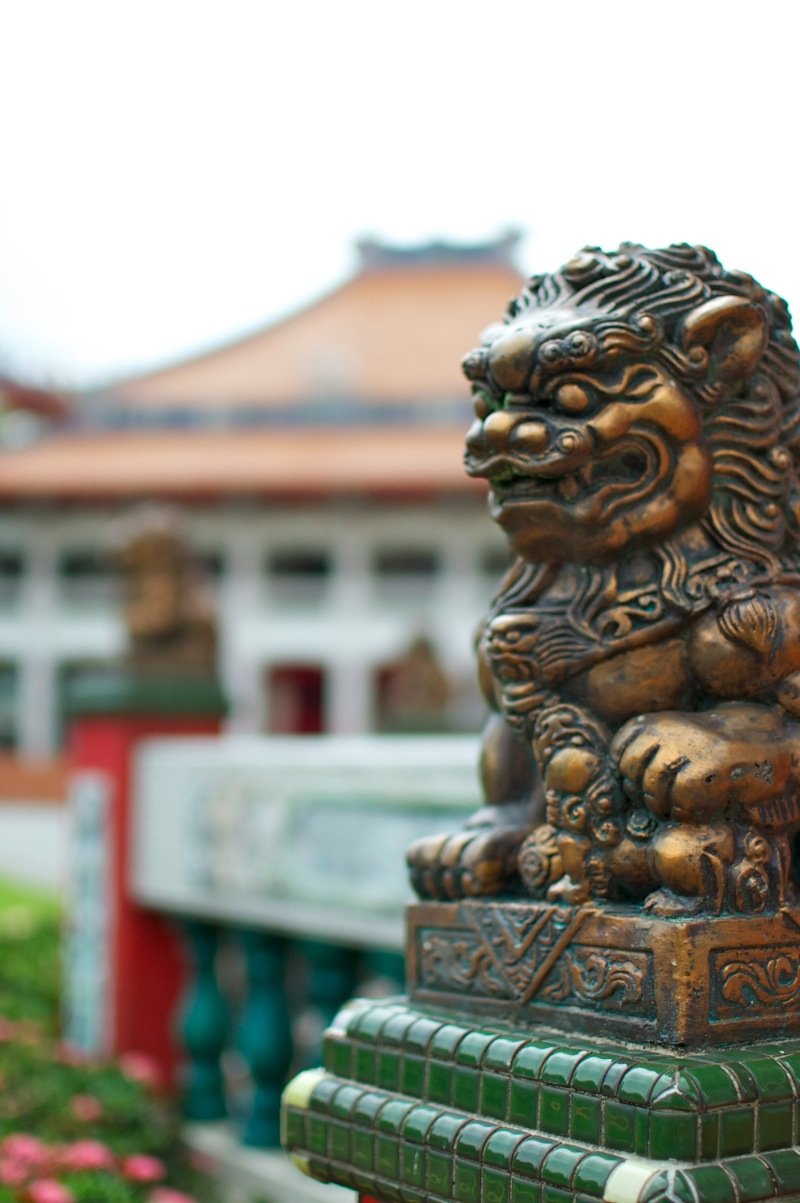 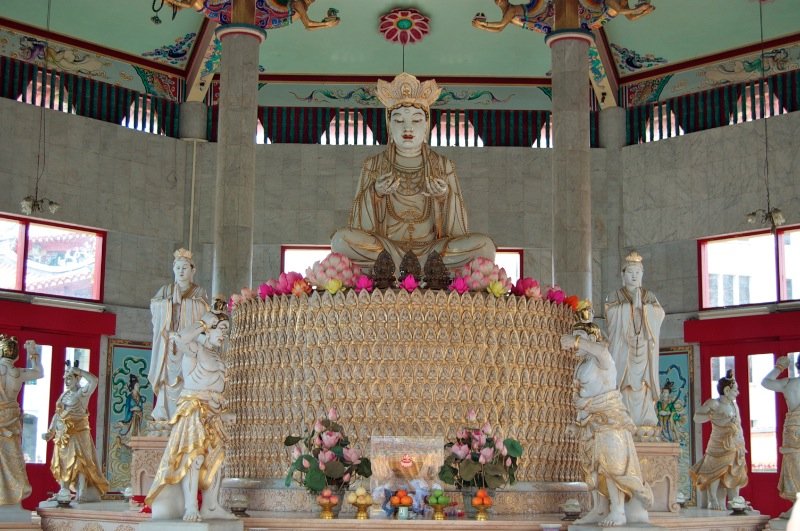 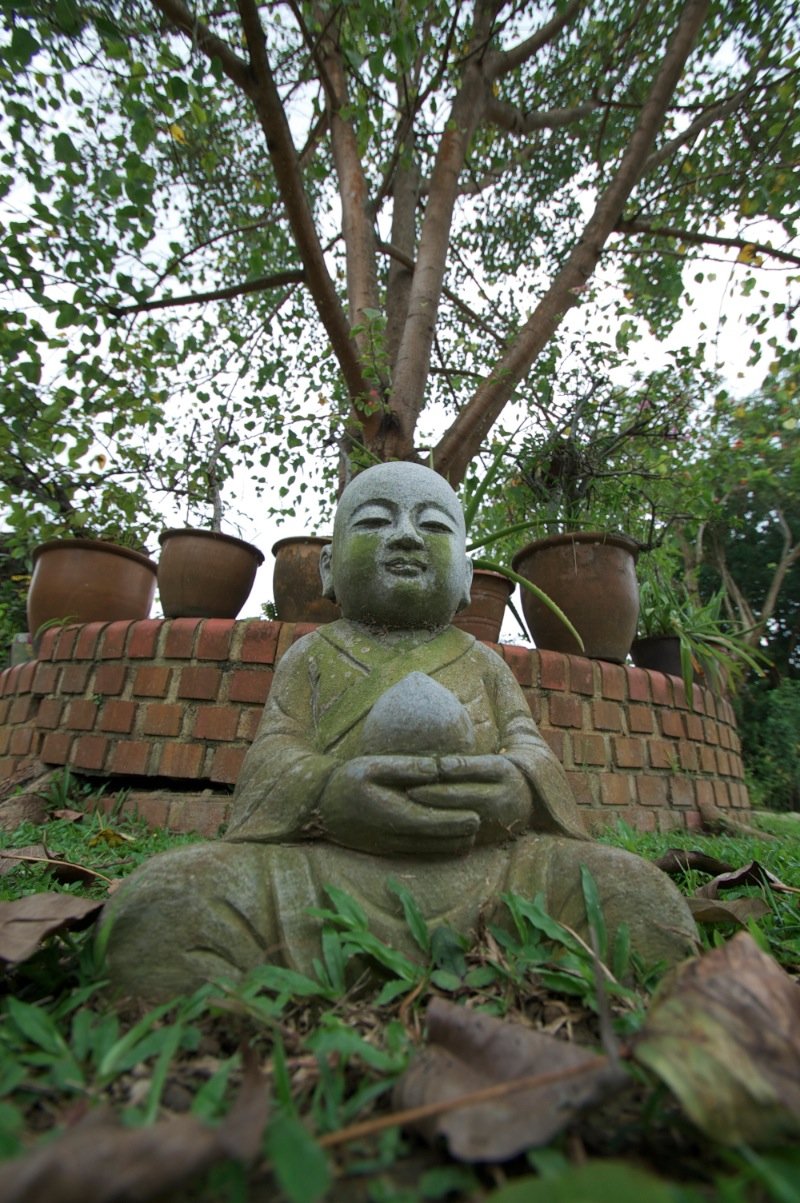 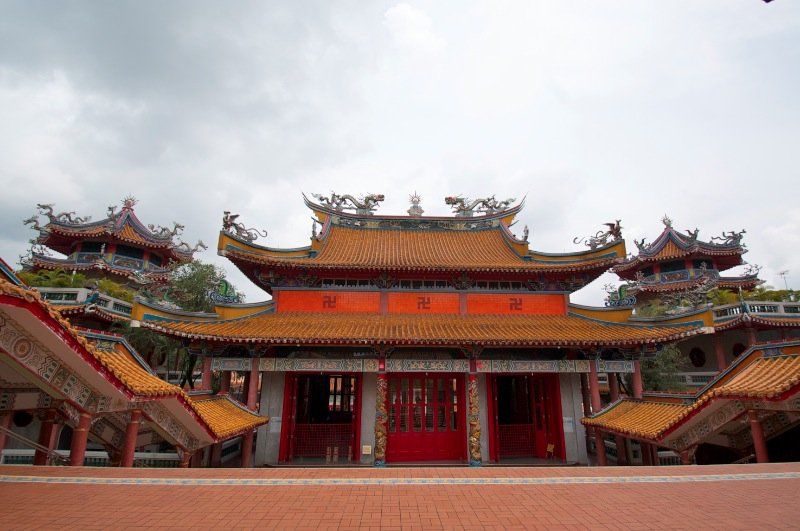 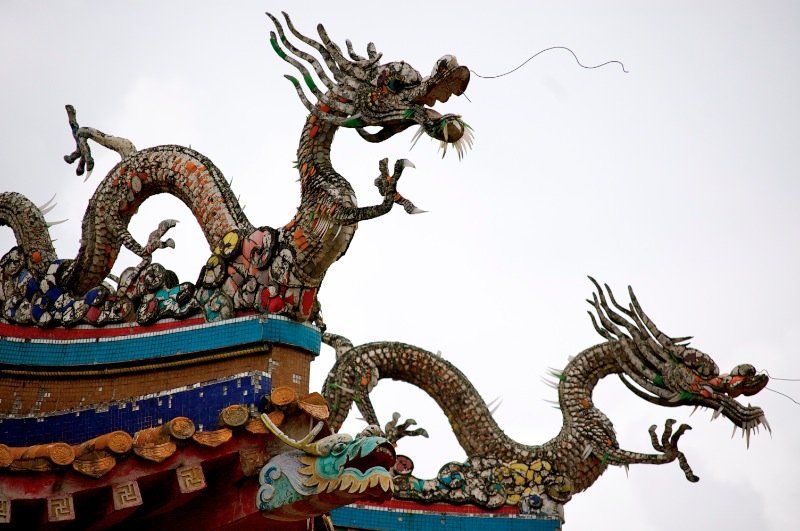 Here is something else about me: I “tried” to be practice Buddhism for a while. Why did I give up? I think it’s a good idea for a future post.

The tour continued to the Changi War Museum and Chapel. Another memorial of the World War II and its martyrs. 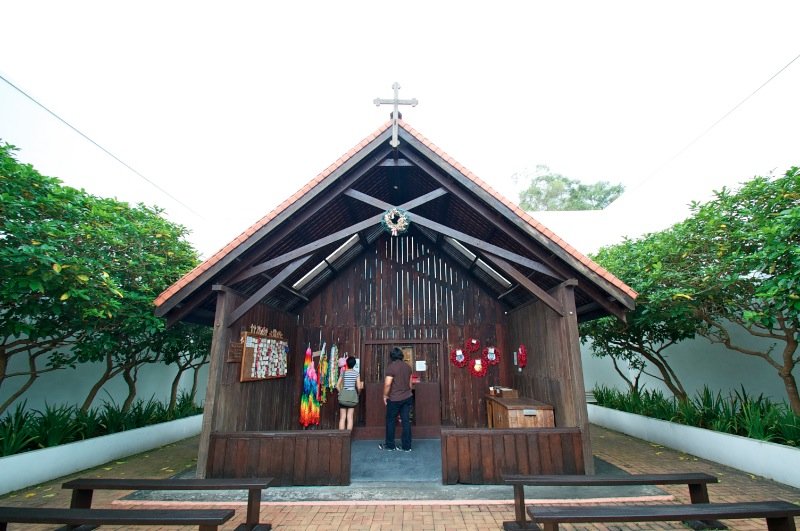 In the end, I was very satisfied about the tour, totally worth the 70 Singaporean Dollars I paid.

I have a terrible memory for history and geography, and my only way to learn and remember the facts is going there and see the places. Another excuse to travel? : ) Anyway, I am very happy that I learnt something more about Singapore and its history, as this always opens a new point of view on the local population’s background.

Am I weird or do you also look for the cultural side of the places you visit? I had to go alone as no one else wanted to join me. This made me feel like a freak! : )

Someone told me Singapore is the “Dubai of South East of Asia” – would you agree? I have never been to Dubai (only at the airport) but I wonder if I would have the same feeling there… What do you think?

Tweets that mention travelreportage.com » All around Singapore in 7 hours! -- Topsy.com Reply

[…] This post was mentioned on Twitter by Giulia, Jiyeon Juno Kim and Picture This! Blog, Giulia. Giulia said: New post: All around Singapore in 7 hours! #travel #photography http://fb.me/GYH0fa56 […]

I love this short tour! Gives tourists an insight on where to visit (other than shopping malls) when they only have a limited amount of time in Singapore! :)

Exactly! I would definitely recommend it to anyone visiting Singapore for just a few days.

Wow great tour, glad you get to see some interesting stuff later on. I grow up hearing about those Chinese hell stories. It scares me since I was a kid. They make it look so horrified. lol

Wow Sarah, I thought these stories about the Chinese hell were very ancient… and you grew up with them! So it’s a modern thing too… very interesting and not so different from the idea of hell we (Europeans/Christians) grow up with. Basically it’s all blood and pain, same!: ) It’s unbelievable how these stories scare us so much as children. And then we just realize it can’t be. Well at least I don’t believe in heaven and hell anymore!

I was in Singapore a few years ago and I also remember feeling that cultural sites were hard to come by. Although I really liked seeing the Merlion and having a Singapore Sling at the Raffle’s hotel, there wasn’t much more than shopping malls to see.

I haven’t been to Dubai before so I don’t know how similar it is to Singapore. I know they’re both hotspots for business in their regions though.

Ok, so I’m not the only one who got that feeling, that’s nice to know! I was in a group of shopaholics and I felt like the weird one. Therefore I had my tours on my own, no problem!

Singapore is made up of 63 islands and it is easy to explore this marvelous destination in a short tour without harming your savings or budget. The architectural wonders, beautiful gardens with a number of activities and mouth watering food dishes keeps you occupied with loads of fun.

Sounds like an excellent tour. We have done similar in Mexico City. Thanks

Hmm it looks like your site ate my first comment (it was super
long) so I guess I’ll just sum it up what I submitted and say,
I’m thoroughly enjoying your blog. I too am an aspiring
blog writer but I’m still new to everything.
Do you have any helpful hints for inexperienced blog writers?
I’d certainly appreciate it.

This post truly made my day. You can’t imagine simply how much time I saved thanks to this info! Thanks!

Hi there, I log on to your blogs regularly. Your humoristic style is awesome, keep it up!

Wow, that’s what I was exploring for, what a material!
existing here at this blog, thanks admin of this site.

Very good post. I absolutely love this site. Thanks!