Singapore was not what I expected. What did I expect? Ignorant, silly Giulia has never been to South East Asia before and my imagery of the area was mainly based on Vietnam, Laos, Cambodia and Thailand… How wrong I was! :)

There are things I really enjoyed and others that… well not really.

I didn’t do much research before actually getting to Singapore, I decided to go something like 3 or 4 days before and anyway I always like the “surprise effect”, so I just waited to get there before starting planning my visit.

Expecting an exotic and authentic scenery, I found myself in some kind of “Dubai of South East Asia” – modern and shiny. I soon found out about their many prohibitions: no smoking, no spitting, no littering, no bird feeding, no eating and drinking on transportation, no this and no that. Overall, I was afraid of doing anything as I never knew whether it was allowed or not. Not a nice feeling!

Anyway, on the first day and since I didn’t know anything about the place, I decided to play the Super-Tourist and with my camera and sunglasses I jumped on one of those “hop on-hop off sightseeing buses” – I thought it was a good idea to get familiar with the City and the pass was unlimited for 2 days. It turned out to be a very good choice as taxis are expensive as hell (if compared to Cairo…) and it allowed me to see where all the landmarks were before actually visiting them.

My first stop was the beautiful Singapore Botanic Gardens. 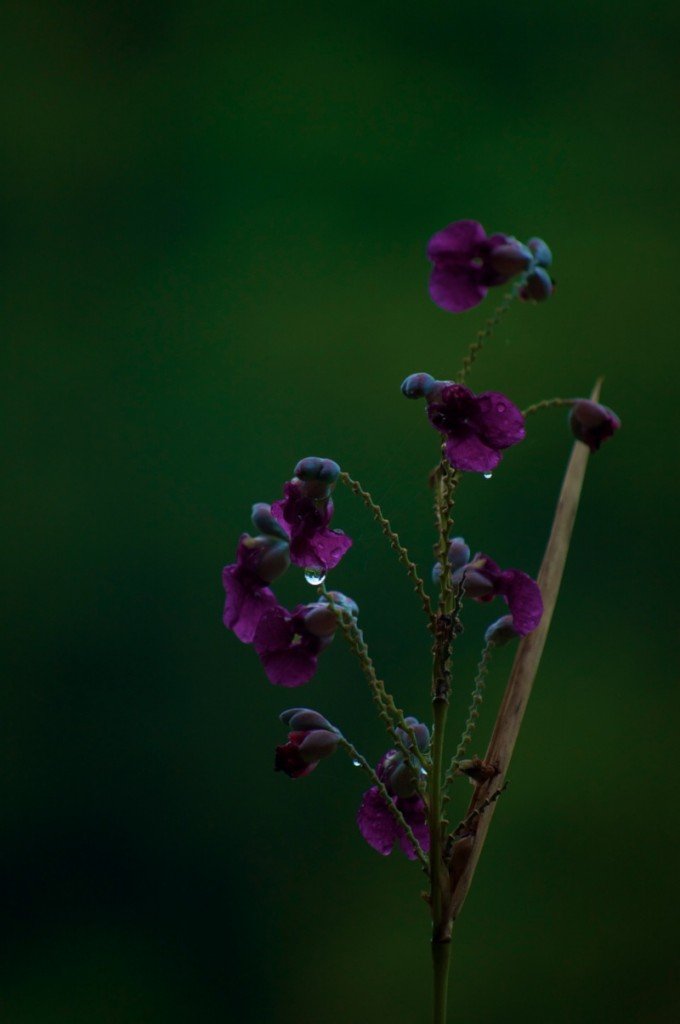 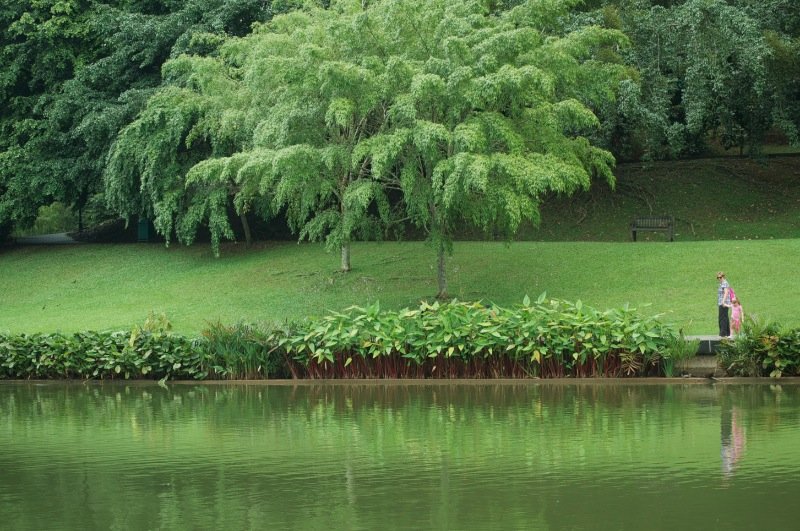 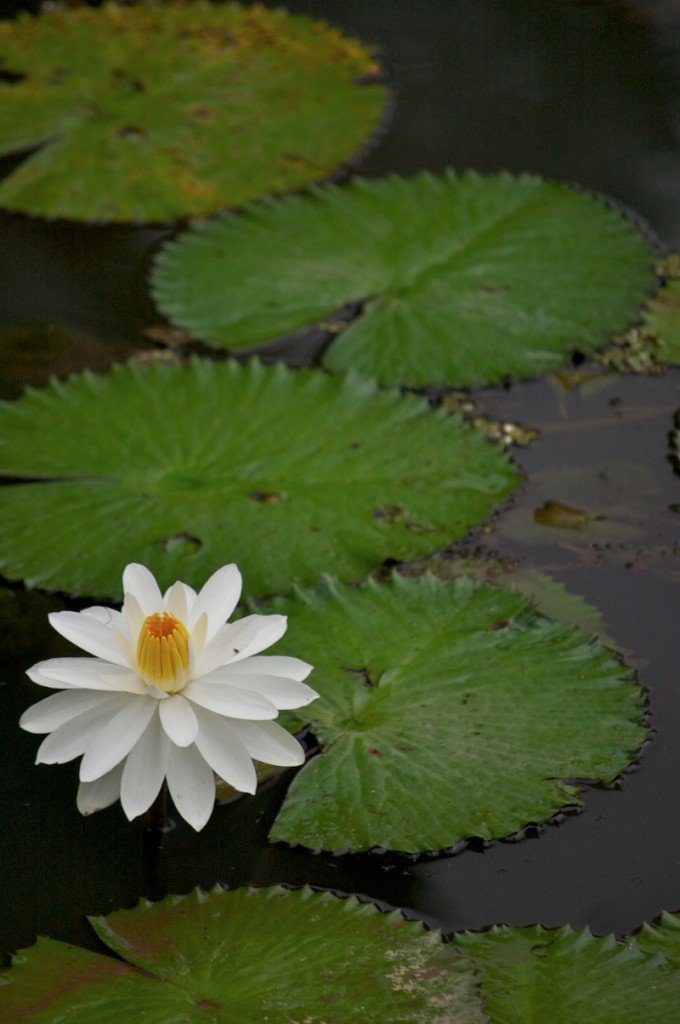 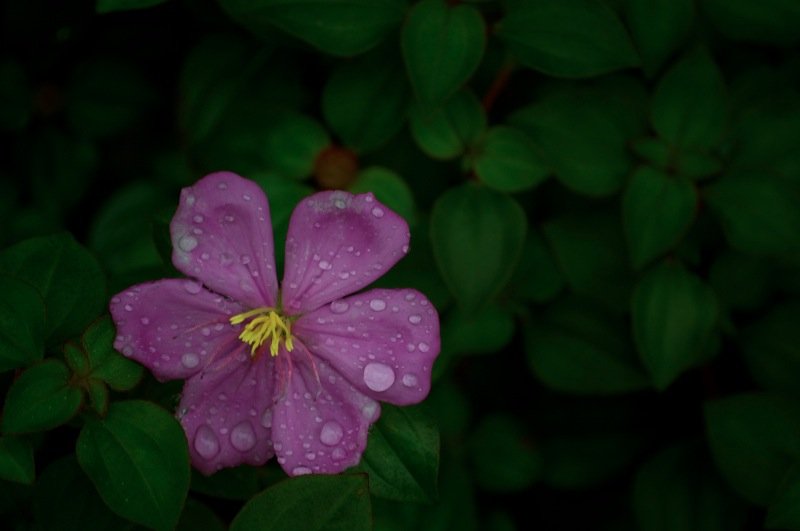 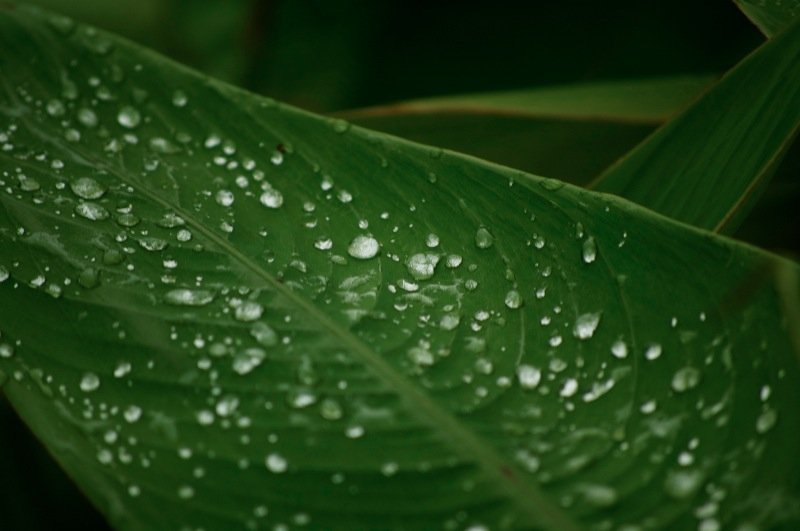 An oasis of peace and silence, a shot of pure oxygen after Cairo’s pollution. I couldn’t ask for more. Moreover, entrance is free!

And after that, I “had to” see the shopping paradise of Orchard Street – I hate shopping but looks like this area is a must, so I decided to have a look at least at the geeky malls. I was looking for a video camera but found everything even more expensive than Europe. Disappointment, disappointment. 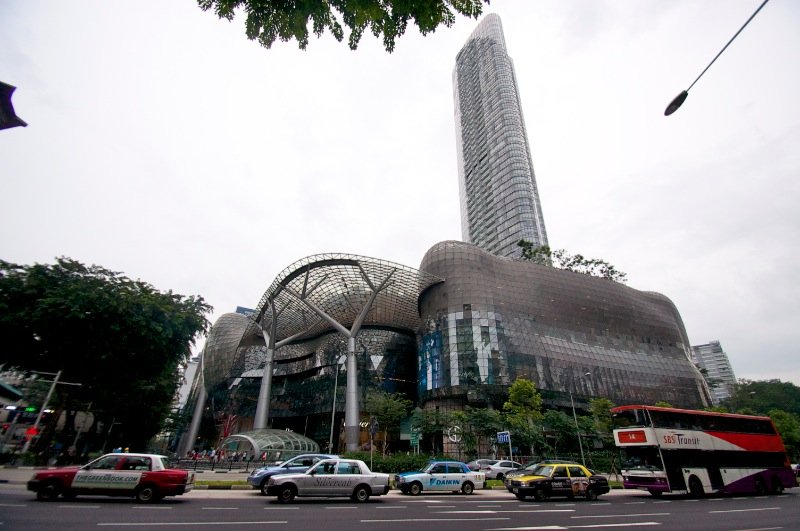 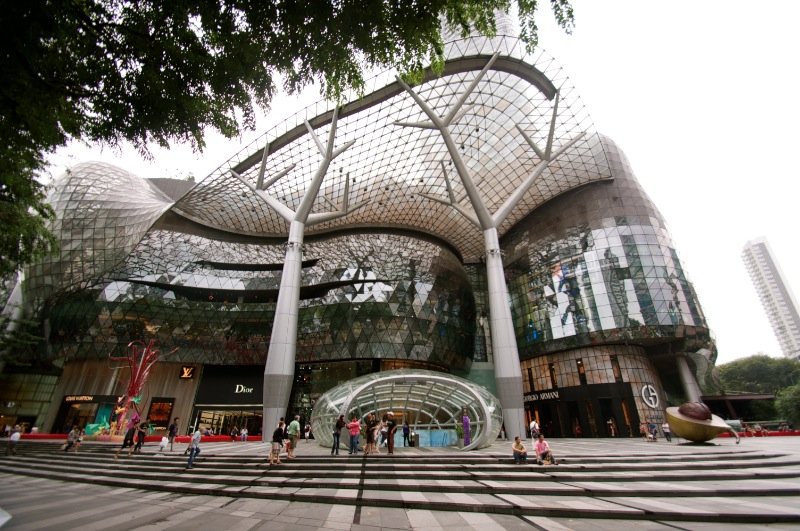 Orchard Street and its crazy malls

Strolling down Orchard Street I finally found a kiosk that sold ice cream sandwiches, as my sister Runaway Juno suggested me. So I couldn’t miss it, and I ordered a chocolate chip ice cream sandwich. It was so good, and I loved the pink/green bread! 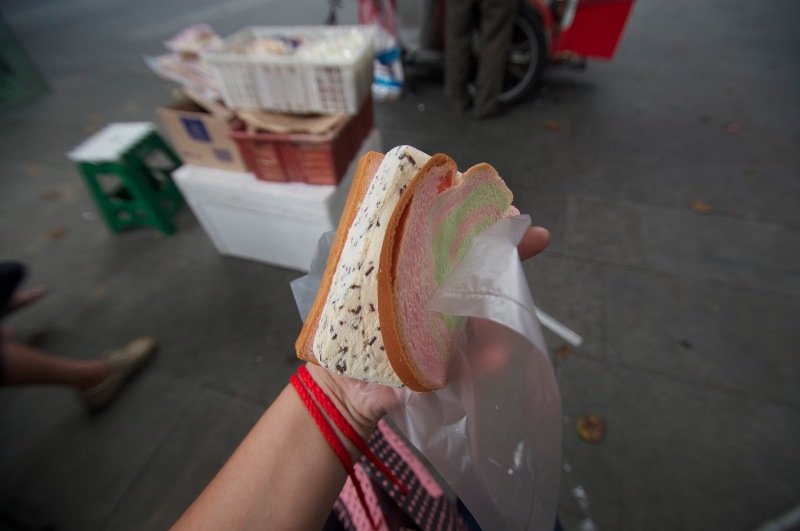 Another not-so-lucky experience with food was with the typical dish “Laksa” – a soup with fish, eggs and noodles. I went to Singapore with people who didn’t want to try local food, but rather ate in fast foods every day. I hate this kind of attitude, and for once I successfully dragged them into a local restaurant, I ordered Laksa… we literally ran away from the restaurant because no one could stand the smell of it – me neither! (I paid before!).

Since I’m not a big fan of shopping, I decided to visit a photography exhibition in one of those crazy malls, and it was really interesting.

The girls and women in the photographs, from 8 to 25 years old, are survivors of trafficking, rape or abandonment, or are the children of sex workers. 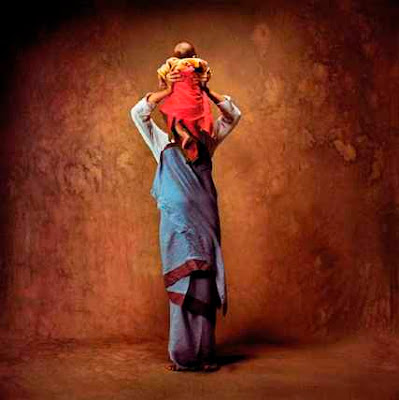 ANOTHER ME: TRANSFORMATIONS FROM PAIN TO POWER Achinto Bhadra (India)

The following day I went to Chinatown – finally a place where prices were not too high, and decided to buy shorts (and in the meantime I wondered why I was doing that, since once back in Cairo I couldn’t wear them anymore… but whatever!).

Chinatown was really interesting – so colorful! – and feverish preparations were under way for the Chinese New Year of the Rabbit! Too bad celebrations started on January 15th… the same day I had to leave! 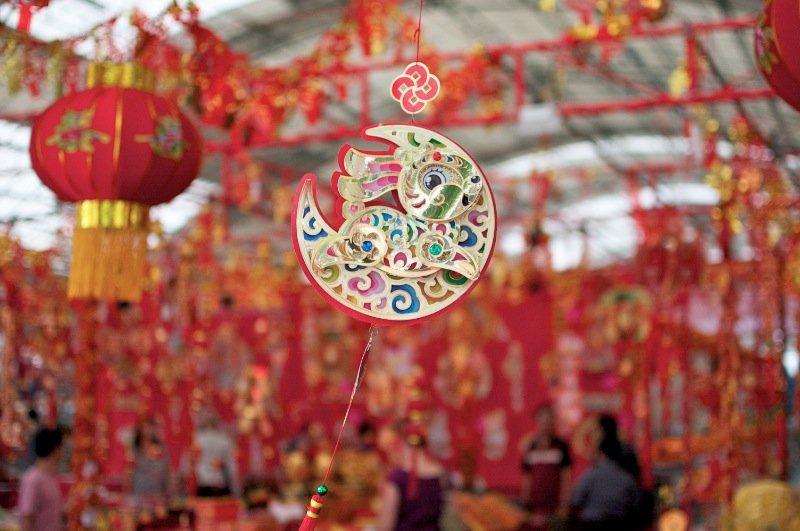 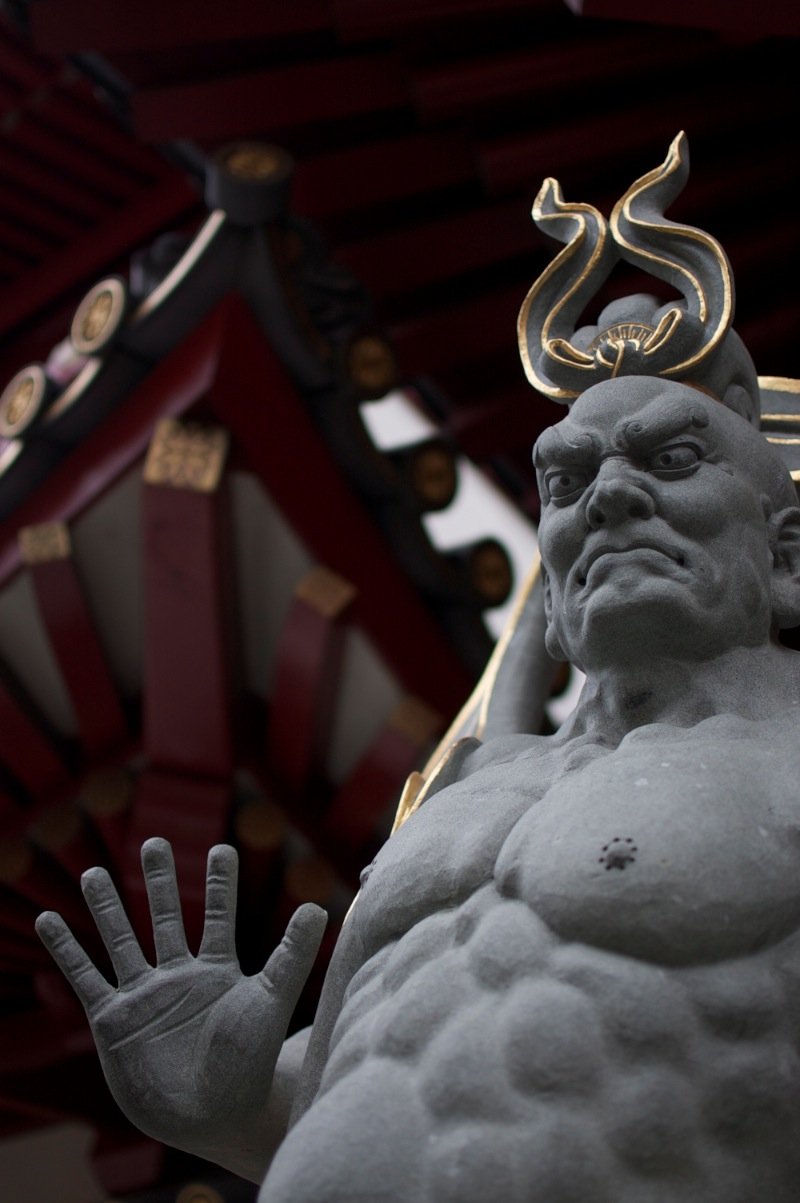 And finally at night we went on the “Bumboat Singapore River Cruise” – a cruise of about half an hour between Singapore’s skyscrapers, nightlife and landmarks. I loved it! 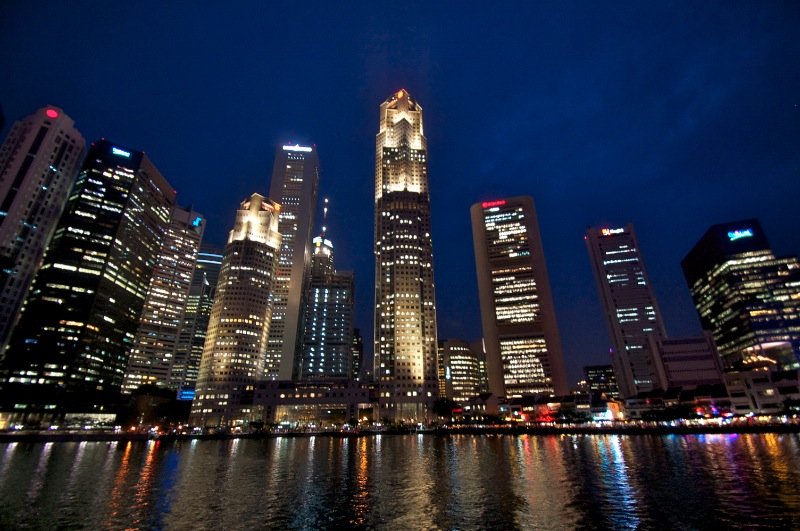 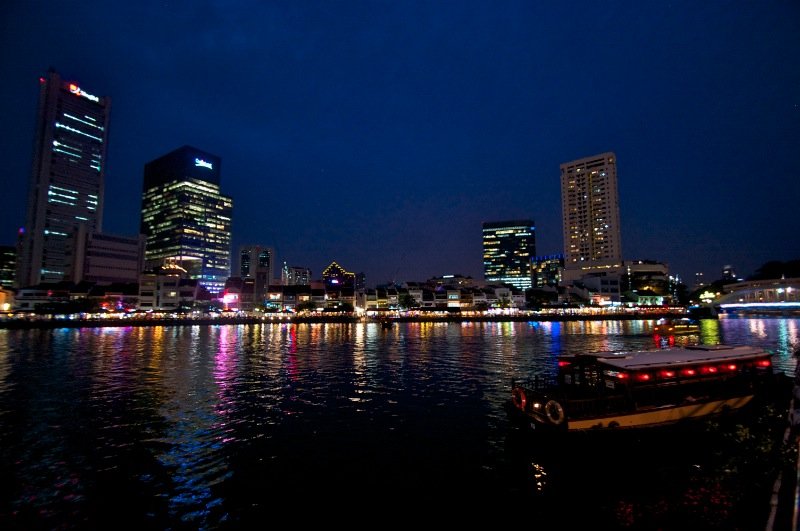 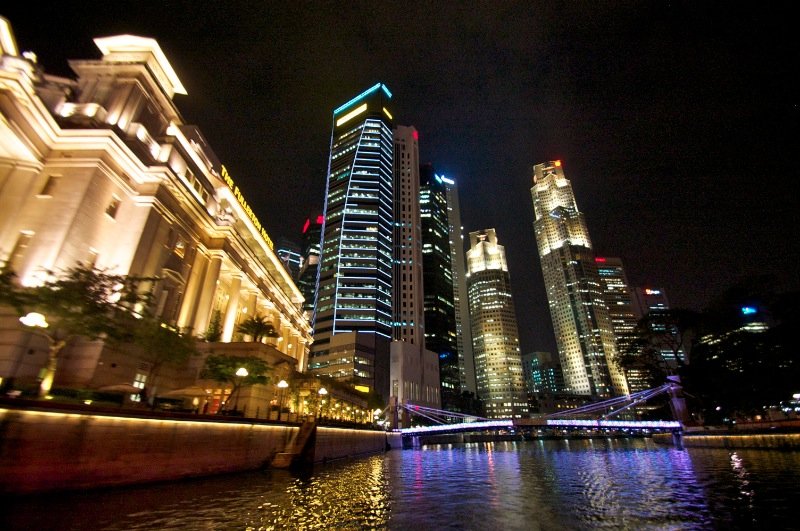 I soon found out that thanks to the location of my hotel (the Carlton) I could easily reach almost everything just walking. So I spent my following days just walking around the City and discovering nice neighborhoods such as Little India and the Arab area. I found myself in front of a mosque when the prayer started, and it reminded me of Cairo. It felt so weird! 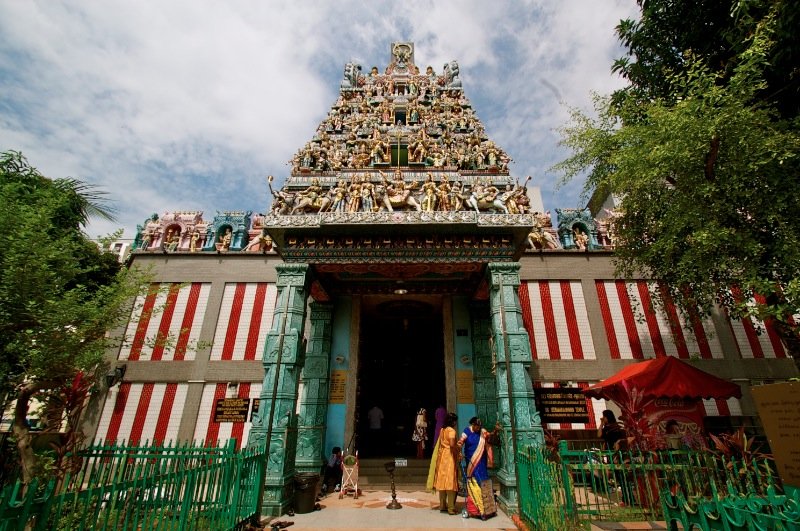 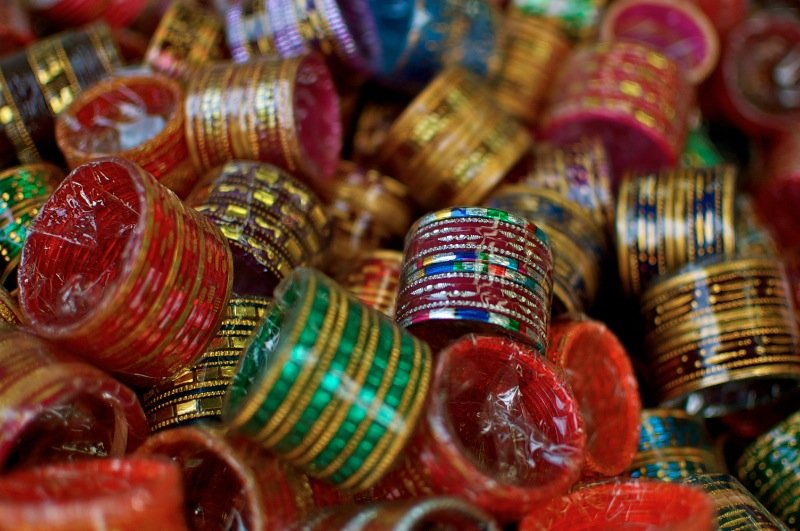 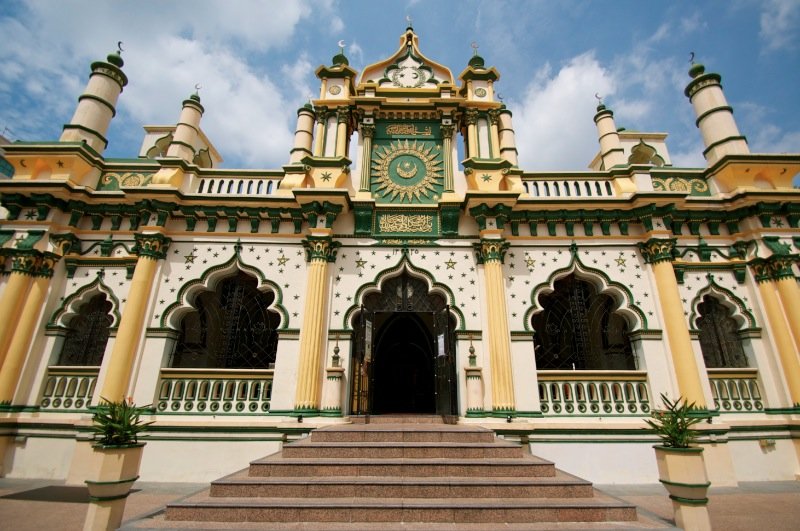 Another day I decided to walk along the Singapore River, all the way to the Marina. It was maybe the best time I had in the City, and seeing it walking and not from a bus or a boat had a totally different taste. Plus, it allowed me to take all the pictures I wanted (don’t worry, I’ll share just a few of them!).

I can’t say a lot about Singapore as I spent only 1 week there, but my personal advice is: walk! You’ll enjoy it more. 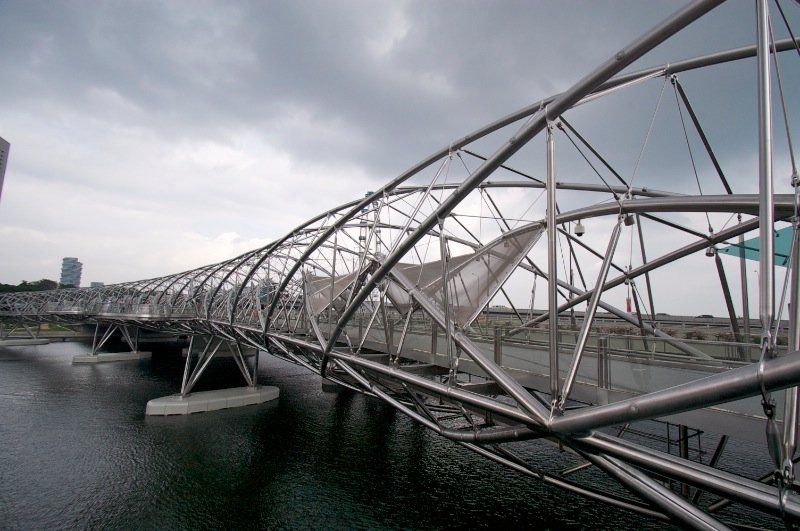 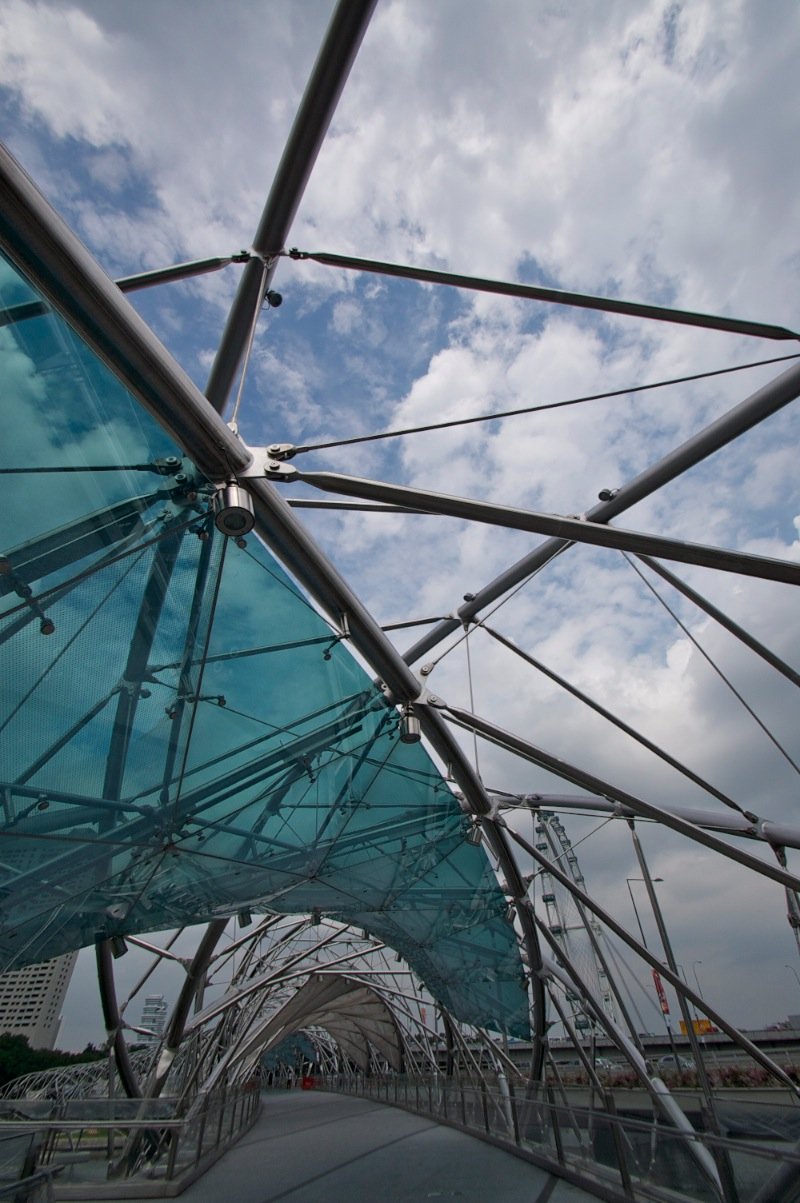 Walking on the Helix bridge

I was also so lucky that on the way to the Marina, on the bank of the Singapore River, I accidentally bumped into a “Lion Dance” show – I wanted to see one but I already cut it out of my list as I thought I didn’t have time… and then , by chance, there it was!

The Lion Dance is an ancient Chinese dance in which performers mimic the lion’s movements in a costume. There were 3 guys in the lion below, if I remember well! 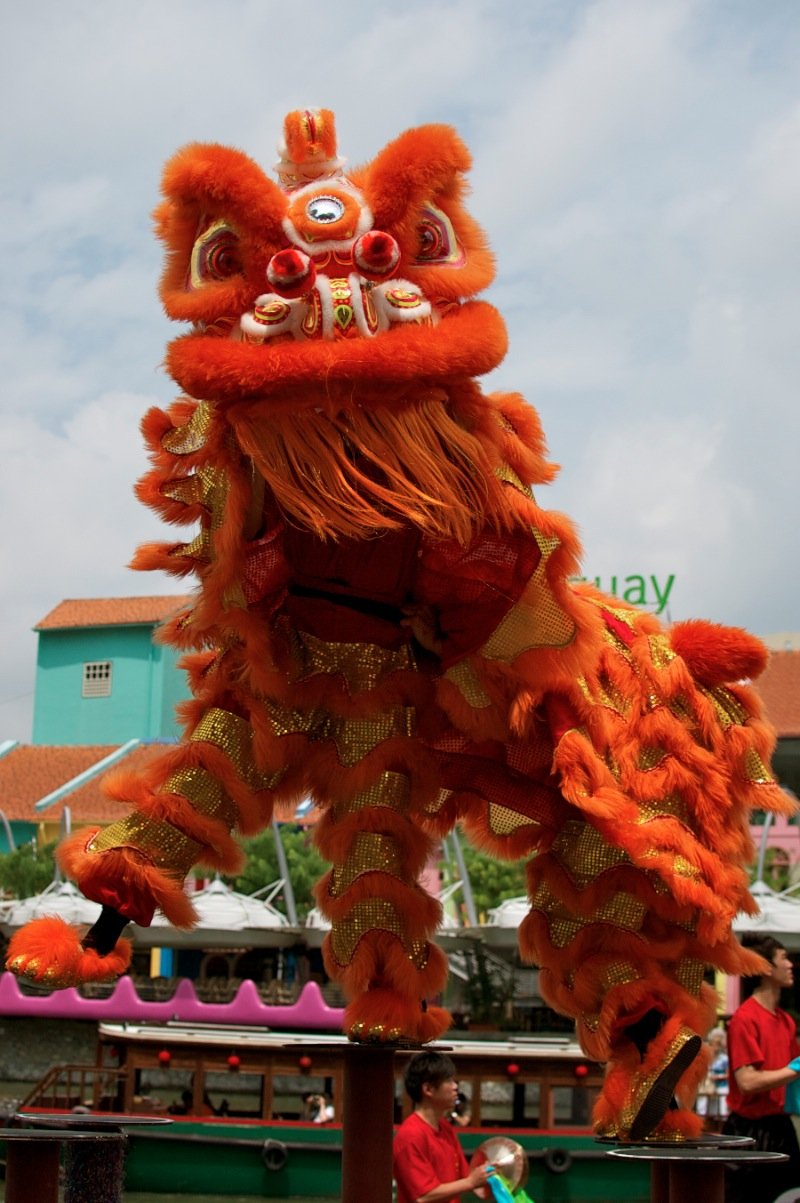 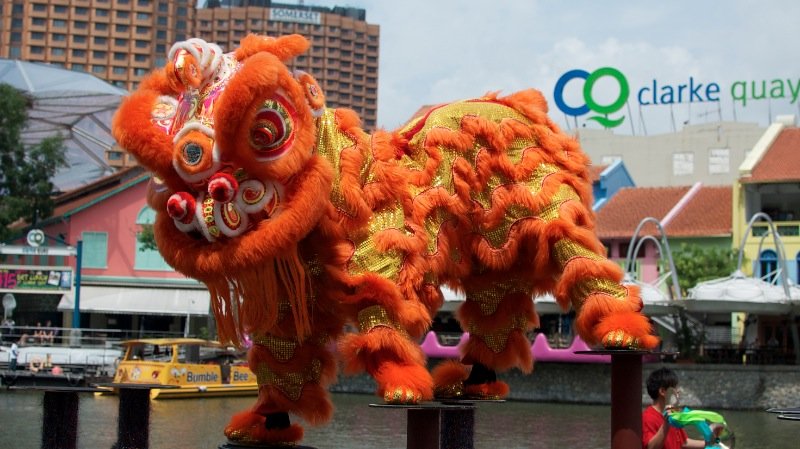 Last but not least, one night we went to Sentosa Island, an island on the south of Singapore, to see the famous “Songs of the Sea” show – everybody loved it. It’s a show where you sit next to the sea, and then with lights, fire and sounds they tell you a fairy tale. Very nice… and romantic. 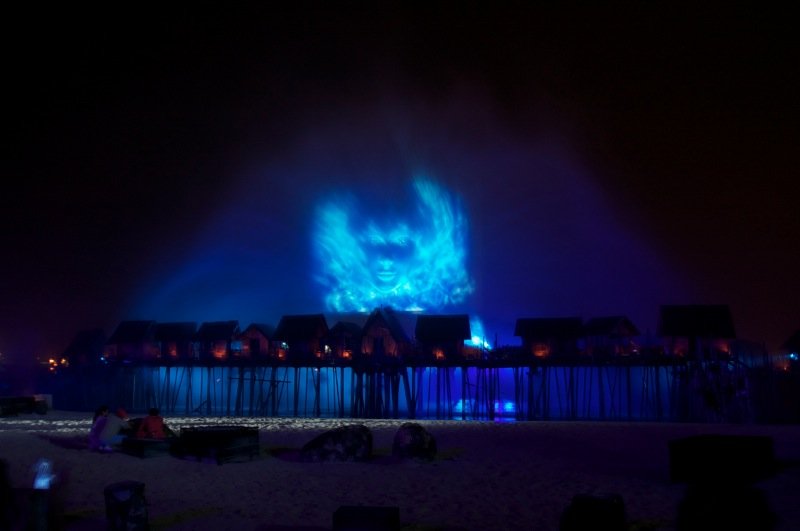 A moment of "Songs of the Sea"

I can’t say I didn’t enjoy my stay in Singapore. But the more I strolled around, the more my mind got full of questions: “where is authenticity?” “where is Asia’s taste?” – yes, there are temples and stuff but everything is newly built or renovated. Everything looks new, and most of the people go to Singapore for shopping purposes, apparently.

What I really loved was the weather: about 30° C all the time – Cairo is around 10° C these days!

I read some guides and websites (a big THANKS to @visitsingapore for all the awesome tips!) and saw there are natural parks and a countryside. But every time I asked to tour agencies or information points, they all seemed to discourage me to go. Why? They focused on the shopping area a lot, and many even told me they didn’t know anything about places outside the City.

I started to feel a little trapped and looked for a way to see something outside of Singapore City. I didn’t have many options: little time, budget, and poor information on transportation etc.

On the last day I decided to invest S$73 (About €40) for a tour of the whole island. At least to have an idea of what was out there. And I was very happy with the tour, even though… I’ll tell you next time!

Stunning girl! :) Singapore has changed a lot since I was there. The first shot is my favourite style. I have the exact same one in Hong Kong. :)
Oh and I just found out there’s tiny smily face on the left bottom of your blog. Did you do this? So cute!

Hey, glad u like the pics girl :)
I can’t see any smiley face… guess the blog is smiling to you only :p

I never thought about visiting Singapore until I saw your beautiful pictures. It’s such a vibrant place to see. Great shots girls!

I am so in love with the small details pictures (i.e. the flowers picture or the statue). I think they are so beautiful and wonderfully composed. Are you using a 50mm?

Your post on the local dish “laksa” makes me laugh. You should have tried ‘satay’ (marinated,skewered and grilled pork/chicken) and maybe you’ll love it. Nice photos particularly the Lion Dance!

travelreportage.com » All around Singapore in 7 hours! Reply

[…] I’m going back and have some plans: I will keep you updated! As I previously told you on my Singapore Photo Essay, I enjoyed the City but couldn’t wait to see what was outside of […]

I work as a Singapore based commercial Photographer. It’s amazing to see how the Singapore skyline have changed just within the last decade. Your images capture some of these changes. Thanks for sharing.

I am a Singaporean, and it’s nice looking at my own country in a different perspective.
They are really nice photos :D
Just want to state that, for Lion Dance. They are only 2 people underneath.
One supporting the head as it weighs quite a bit, and the other acts as the support for person infront. :)

The vibrant culture of Singapore is displayed through this photo essay and the various attractions in this spectacular city can be seen through it as well. Tourists taking flights to Singapore definitely get to enjoy the allurements.

Wow what a fantastic shots. I love the botanic garden shots. Well done.

[…] all the time and I hate umbrellas. I brought a plastic mantle, some sort of K-Way I bought in Singapore last year for 1€ and I am glad I […]

Wow ! What a collection of images. While Going through photographs only, I can conclude that Singapore is not what one can expect. My craving for visiting Singapore has increase more now.

Singapore has world class attractions, exclusive cultural and architectural gems.. All the things we can see through your post. beautiful pictures. Great post!