I’ve never tried Korean food before. Never had the chance… so what better occasion than Cairo, Egypt? It totally makes sense!

Of course I got inspired by @RunawayJuno. I noticed that in the area around “one-of-the-jobs-I-have” there are many Korean restaurants, and I was wondering why. Still have to answer to this one by the way, but I guess there are many Koreans living in the area, even if I never really noticed. Anyway, I promised myself I would try it as soon as possible.

The occasion came 2 days ago, when I had to commute to reach 2 different offices, in 2 different areas of Cairo, for 2 different jobs – and these 2 areas are VERY far, I tell you. 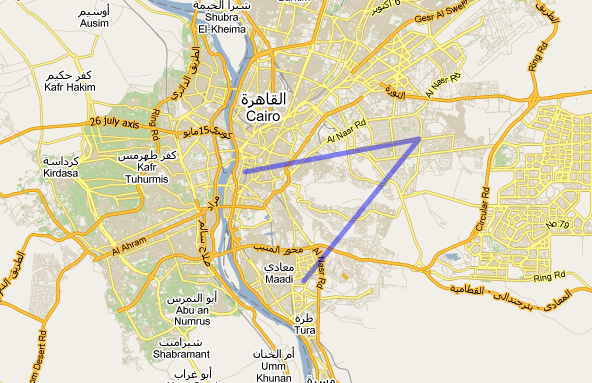 So the upper – left point is where I live (Mounira). The upper – right one is the 1st office I went to (Nasr City). Then I took a taxi for the lower – left point (Maadi) and before work I had a spare hour. So while on the taxi I got super excited thinking it was the right time for Korean food! Yay!

I wrote to Juno and asked her for advice about what to order. And here is how it went: 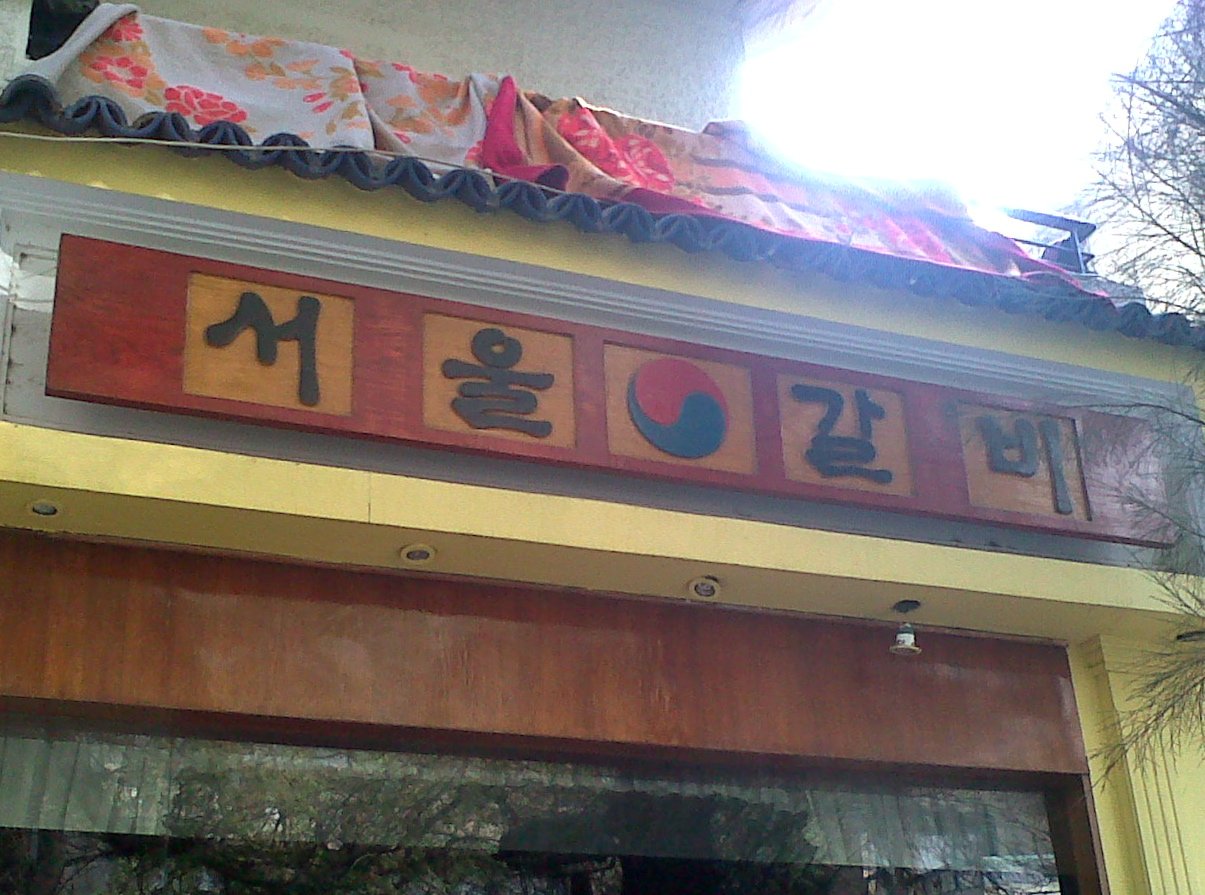 Among the many Korean restaurants of the area I chose this one just because it was the only one with a Korean writing – I mean there was a closer one but come on, it’s called “San Marino”… that doesn’t really sound Korean to me.

I later found out the restaurant I chose is called Seoul Barbecue – fair enough. 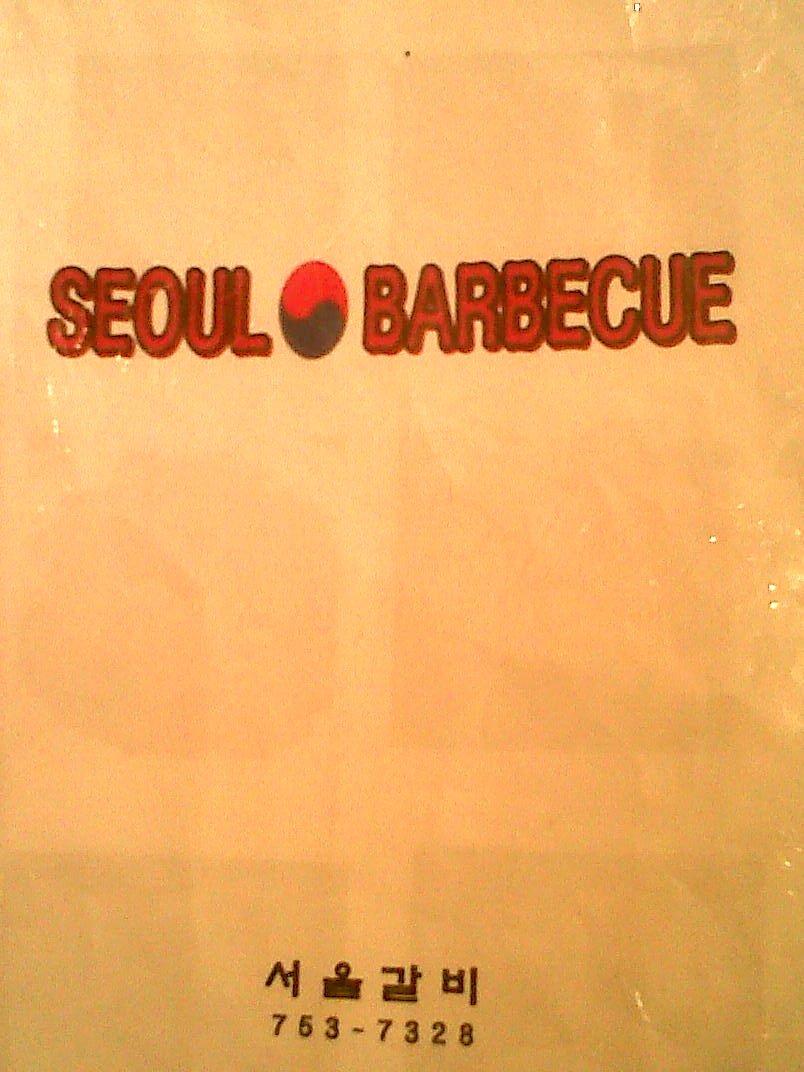 Oh, and I apologize for the horrible quality of these pics but as much as I adore my BlackBerry I also hate its camera. It sucks. I didn’t expect to have to take pictures, therefore I didn’t have my camera with me. Ok, enough apologizing! Let’s go straight to the food!

So I enter the restaurant and they let me sit at a table. Then a woman approaches me and tells me to move to another one coz she thinks I won’t like the smell of the soup that’s coming to the next table. Oook, I still wonder what soup it was! Anyway I sit at another nice table next to the window, ideal for one of my favorite hobbies in Cairo: people watching : ) 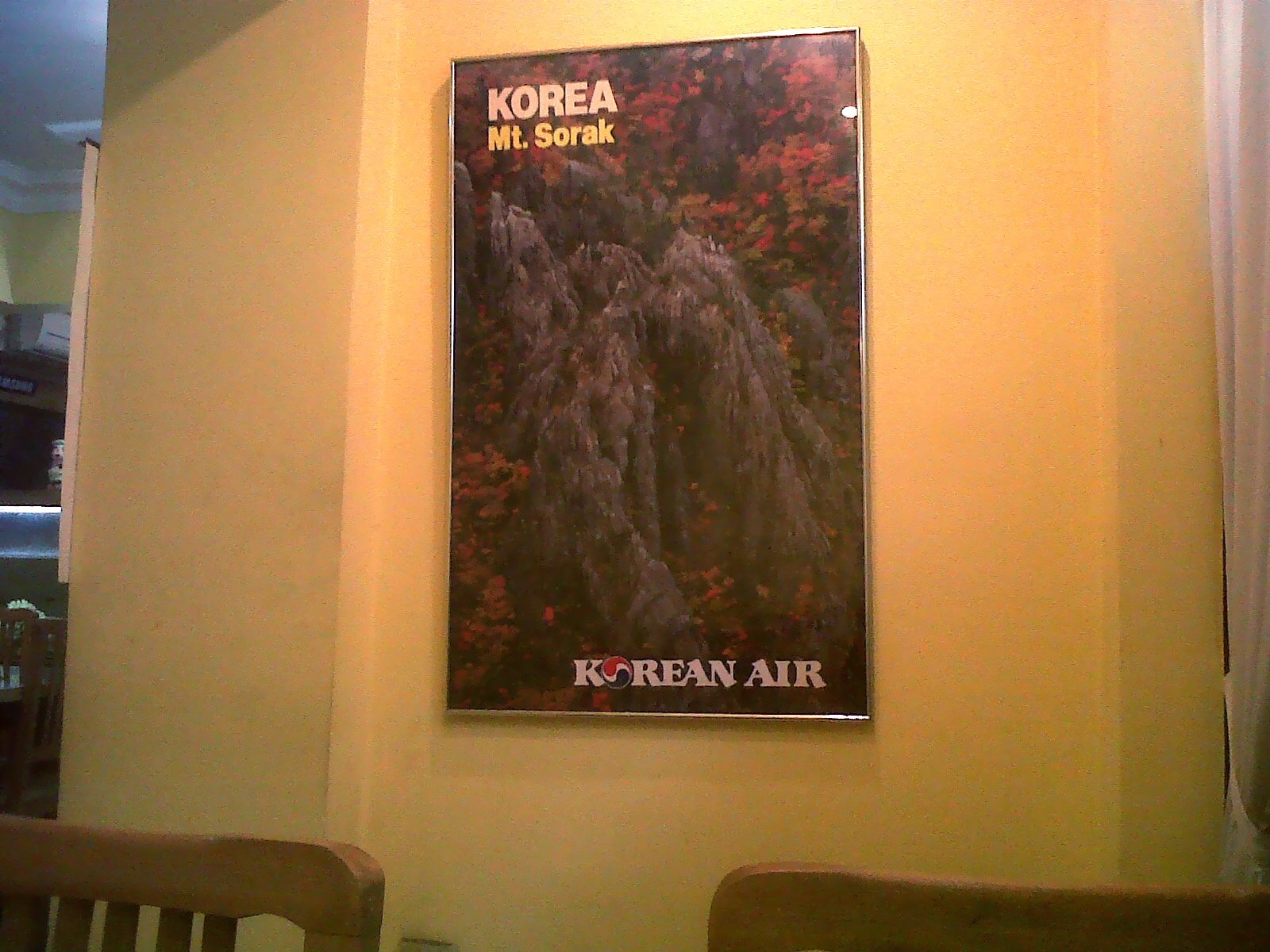 In front of me there is a poster of this “Mount Sorak“, Korea. I’ve never heard of it but it rouses my curiosity. And I smile.

There is some kind of board on the table, called “roaster” and I don’t know what it’s for. I admit my total ignorance. 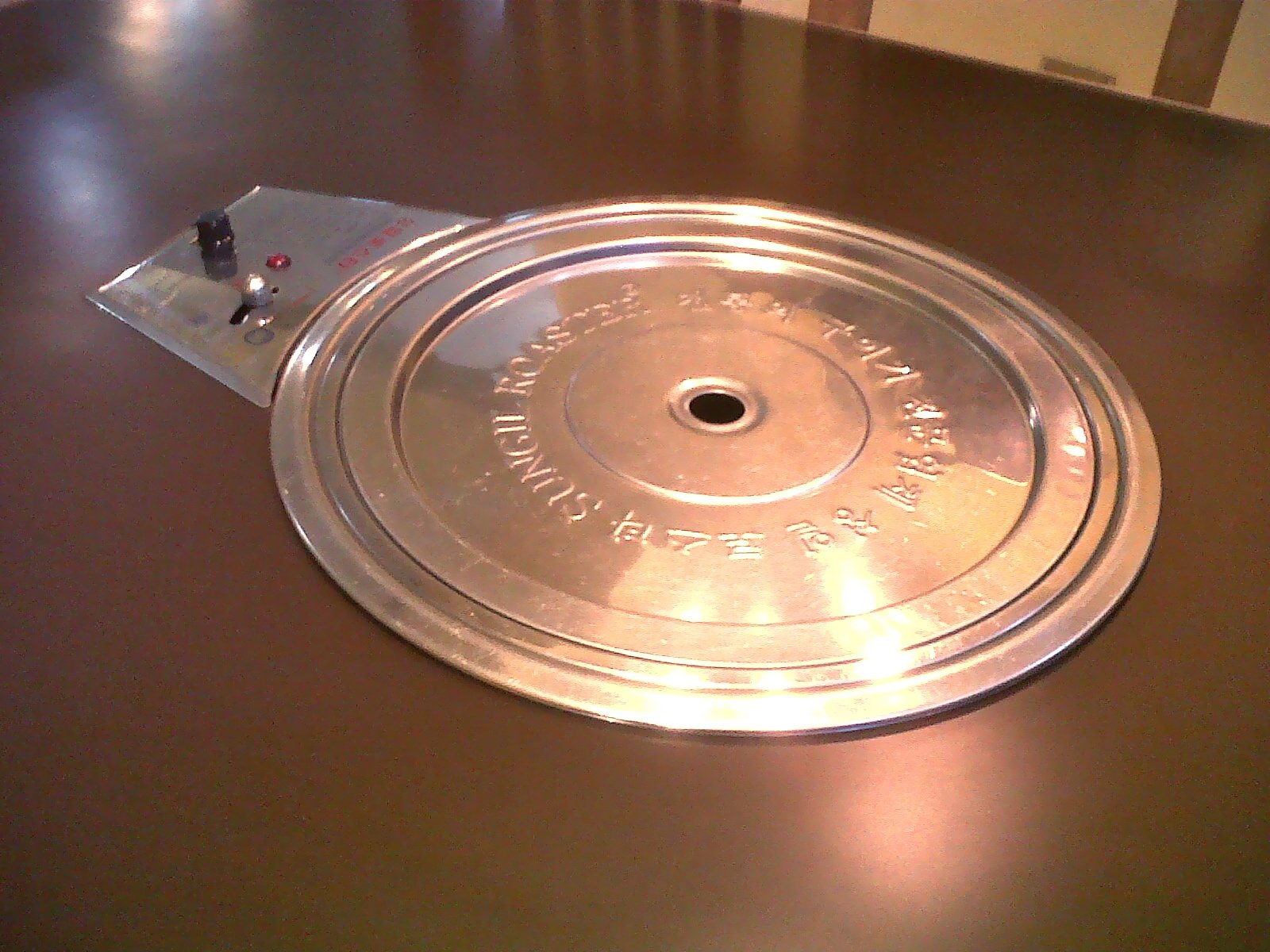 Anyway it was not used for my meal so it still remains a mystery (#2 together with the stinking soup!).

The kind lady comes back to my table, and gives me the menu. It feels super awkward to speak Arabic in a Korean restaurant so I just go for English. Plus, I can’t really tell if she’s Korean or Egyptian as I can hear her speaking both languages with the customers. She asks me “do you study Korean?” – “as if Arabic is not enough”, I think, and I say “no”, and I giggle a bit. She’s nice and smiling, and very helpful. I pronounce the names of the dishes I want to try, and I guess with a very poor pronunciation, but she shows me through the menu and helps me choosing.

Juno suggested me to try the “Bibimbap” (rice with vegetables and egg), I ask for it and they have it. But they call it “stone rice” – whatever… The other things Juno suggested, they don’t have them, so I go for some steamed dumplings. Ok, order placed! 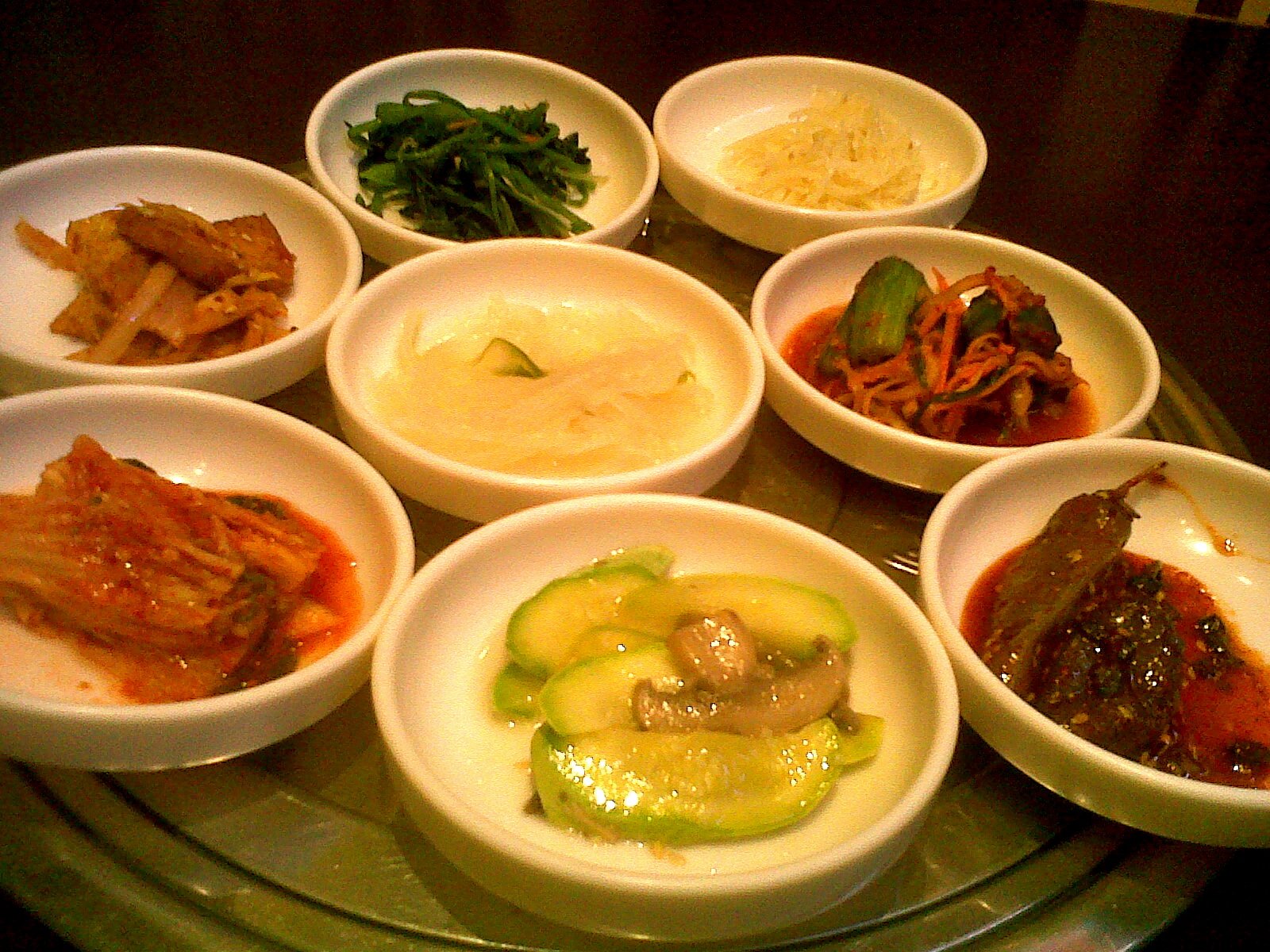 While I wait they bring me all these colorful cups with a complimentary salad.  And shortly after I get my meal. Everything looks very yummy.

This is how the “stone rice” looked when they first served it: 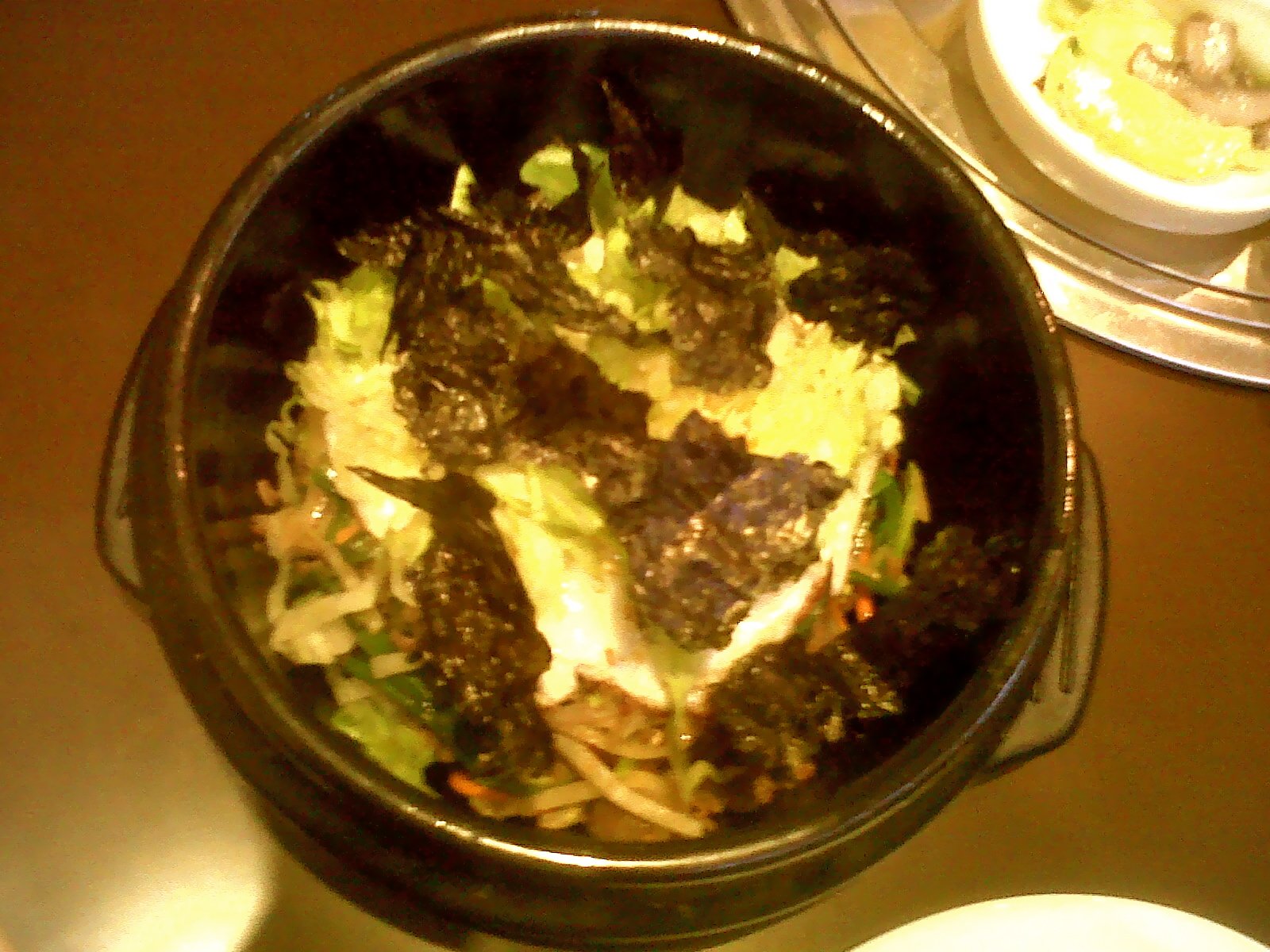 Then the nice lady stirs it for me to show me how to do, and it changes shape and color: 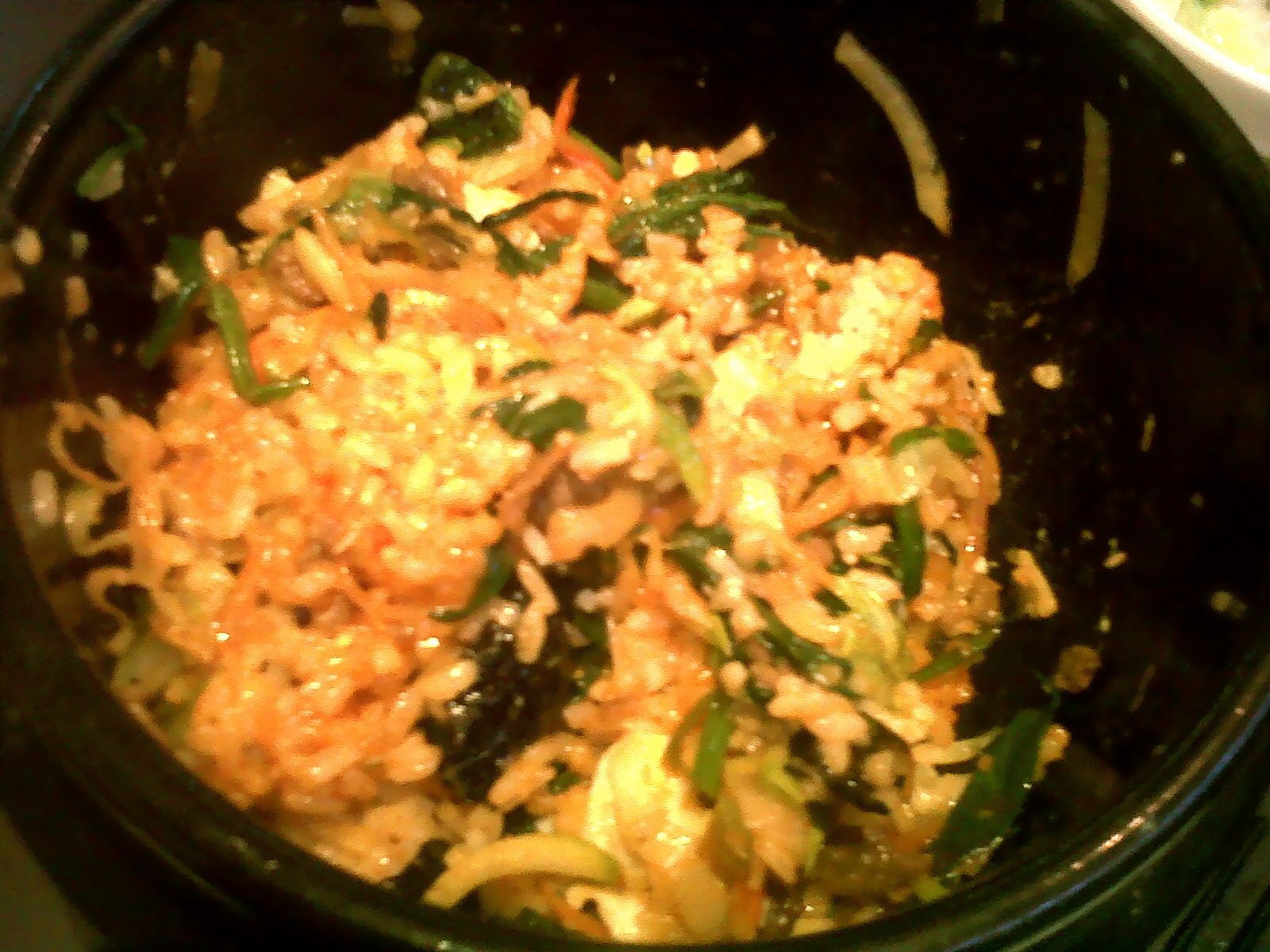 And man, the dumplings were the best I’ve ever had in my whole life, as far as I remember! There was something is the soy sauce that tasted really unique. 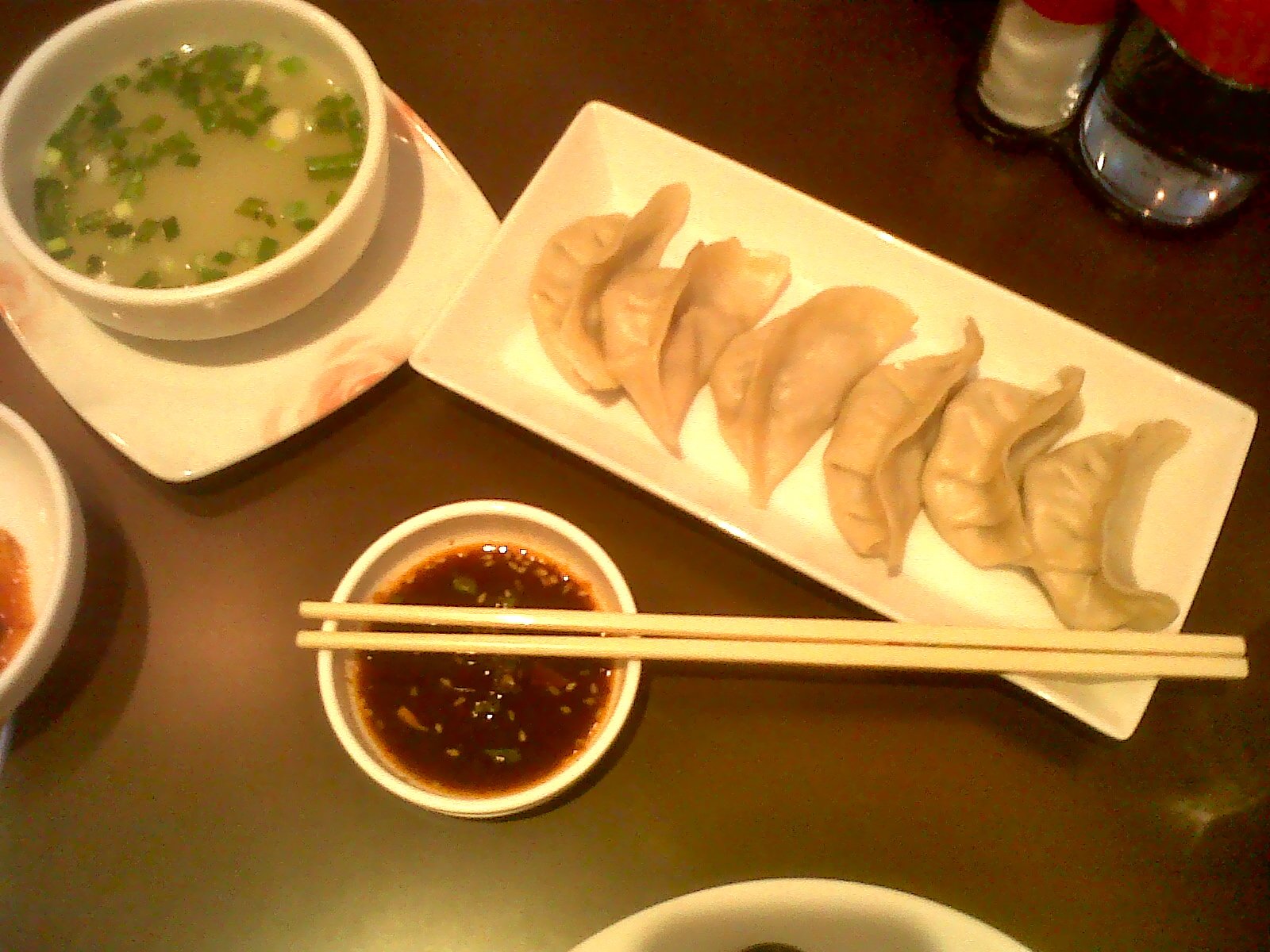 The rice was very good too, a bit spicy, but it really warmed me up. These are cold days in Cairo, alas, but I felt much better after the spicy rice! It was a bit too much so I didn’t eat it all.

I wish I took some pics of the nice waitress but didn’t have the chance. I finally asked her if she was Korean or Egyptian and she said she is Egyptian but her husband is Korean. Sweet : ) She told me that the rice I ordered is as typical as the Egyptian “koshary” (a typical dish of Egypt made with mixed pasta and rice, with vegetables and spices). 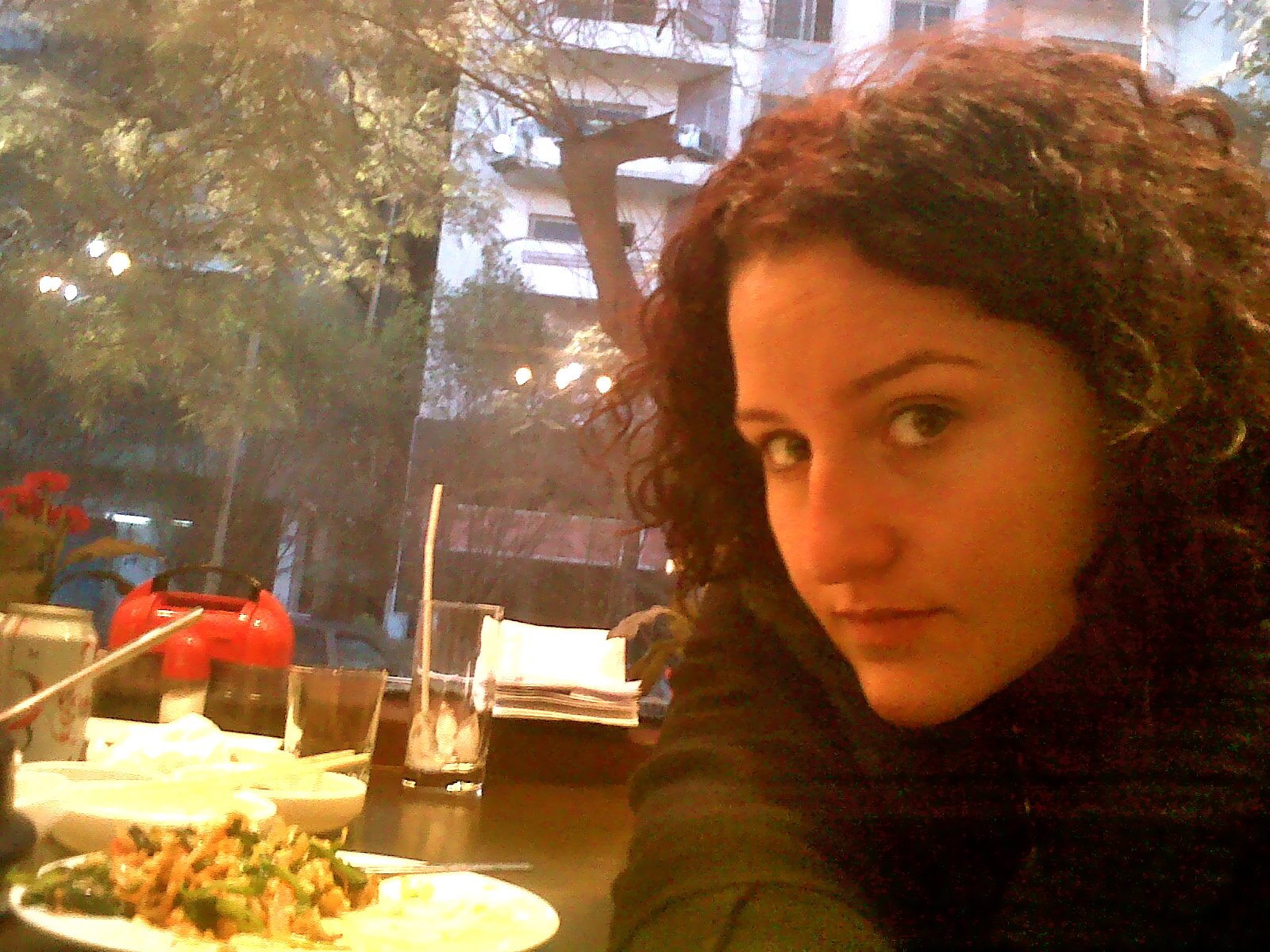 And this is me eating the Bibimbap or stone rice… yes I had a long day as you can tell from the shadows under my eyes!!! But I was enjoying the food!

The Egyptian music in the background was a little downside but after all I am in Cairo! So it’s ok. The main downside were… the prices! It was rather expensive for being in Cairo. I got the check and it was 83 EGP – around 10 Euros. 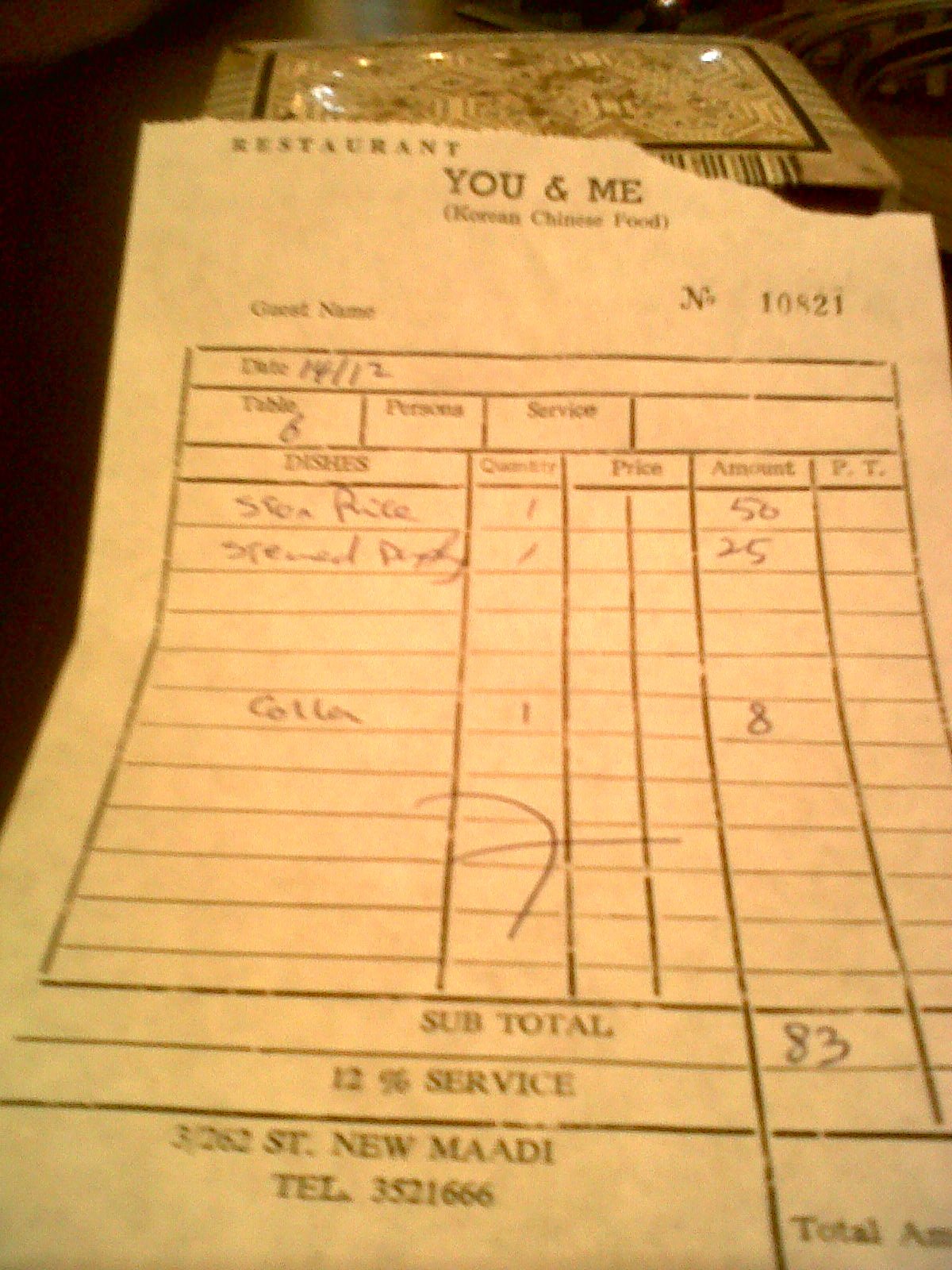 Did I like it? Yes. Would I go back? Yes, and I would like to try something else. I only wish it was a bit cheaper, and that I could go with someone Korean (possibly Juno? It would be great!) to get more advice on what to try. Curious me!

Ohhhh I love it!! :) It sounds like really wonderful adventure! and you handled everything great. :)
Surprisingly they have all proper things! Barbeque fire, side dish plates, even stone Bibimbap. mm…. great thing.
Did you like dumplings? Those are great, aren’t they? :) We make that at home in special occasion, like New Years day. It called “Mandoo (만두)”
whenever if you go back that place, I will teach you some Korean so you can read and know what it is. Did you take any photo of inside the menu? I wonder what they have.
Thumbs up chica!! :)

It’ll be a pleasure to learn some Korean from you hun:)
I loooved the dumplings, it was the best thing I would say!
I might go back anytime since I work in the area!

wow they have Korean food there.. that’s pretty awesome.

Yeah, that looked pretty authentic. The cover was for a large gas burner for if you wanted barbecue. The “stone rice” was mentioned because there are many kinds of bibimbap. The hot stone one I have found is the most popular. I’m a big fan of sesak bibimbap, which is fresh spring sprouts. Hot and cool. The soy sauce may have had sesame oil and vinegar, which would account for the unique flavor. The Korean on the restaurant sign and menu said, “Seoul Galbi.”

That stinky soup may have been Cheonggukjang Jjigae, which is fermented soybean stew that’s actually pretty young but very foul smelling if you’ve never smelled it before. It was eaten on Bizarre Foods. I love the stuff!

I’m really happy to see you enjoyed the food. Next time go with a friend and order some galbi and samgyupsal. That’s always a good way to start a fun evening.

Thanks for explaining me all this! And thanks for the suggestion. Will surely follow your advice next time:)

Cool! This looks like good Korean food. I guess I should give it a try too, plus they have “Colla” :)

I was just considering doing a story about foreign restaurants in Cairo. So far I’ve found a Chinese restaurant where no one speaks Arabic or English (you point at pictures), a Sudanese restaurant hidden down a side alley with pictures of the northern and southern president on the wall, and an Italian restaurant with an Egyptian who lived in Italy for a while and now serves spaghetti with a few little tables on the sidewalk. If you know someone to publish this story I can take pictures.

Actually I have some journalists friends. I can ask! Where is the Italian/Egyptian place? Anyway I’m always up to try some food, just saying :p

Thanks for a great blog. I was able to get the information that I had been looking for. Thanks once again!

Hi Fariz,
I am not sure it’s halal – I know most dishes are vegetarian but about the meat I really can’t tell. Maybe you can contact them before going!

I loved your experience..!
Im very excited to try Korean dishes..! 8))
but, i missed the adress, like i couldnr, really, locate the place..!
would you plz give me the address exactly.. :)

Glad to hear you found it. Enjoy and let me know how you liked it! :)

WOW!! really thx for sharing I was confused whether to go or not ..whether it’s actual Korean food or like any Asian fast food shop (normal noodle and chicken or meat) thanks to you i’ll go in the nearest opportunity 정말 고맙습니다

Oh yeah weird! Good to know the rest was good though :)

I love korean food. I want to try this restaurant with my friends. Do they have ttokboki?
Also. There is another korean restaurant called (gaya) also in almaadi. Which one is better?