In 2007 I had the chance of having a Honduran collegue. We got along very well, but the work environment was awful. I think I never told you, but I’ve been working for 7 years in the hospitality business, as a front desk employee. By the end of the season I was super stressed out and really NEEDED a vacation, and was planning to go for something very relaxing like thermal baths or something like that! But one day my collegue asked me to join her in Roatan

(What the hell is Roatan, I thought, while I was saying)

So I googled Roatan (shame on me, I never even heard of it before. I know it’s a pretty popular destination for Americans but in Italy it’s quite unknown) and found out I was going to spend 2 weeks on this amazing island in the Caribbean Sea!

We were 3 people: me, my friend and her husband. So I was very lucky coz they had their room and I was on my own. Plus, since she used to work in a beautiful resort when she lived there, we were accommodated at a very low rate (something like $30/day including breakfast, lunch and dinner + aperitif etc). The resort name was Henry Morgan. 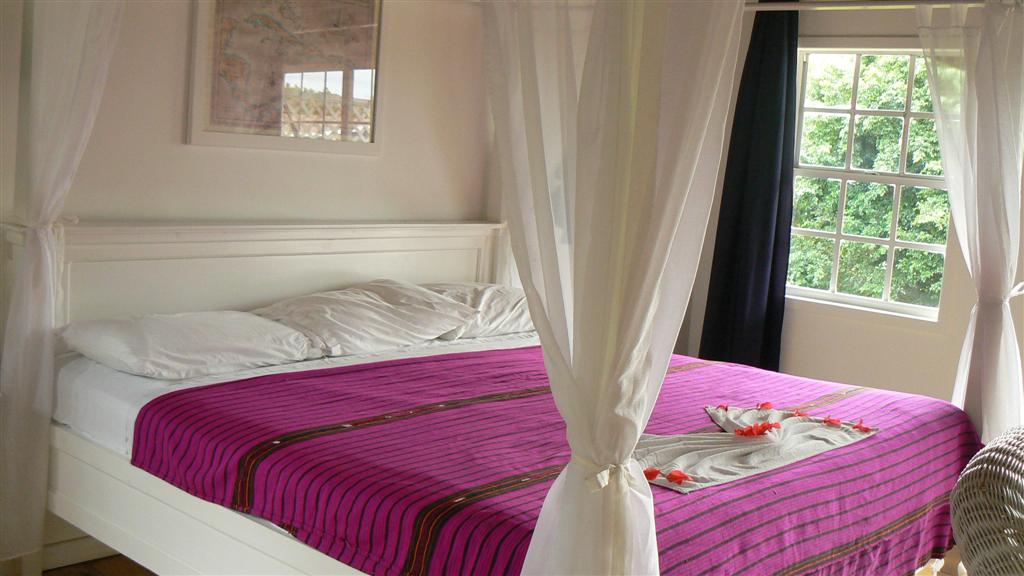 Luxury! Yay! Couldn’t believe this big bed was all for me.

What first stunned me, even before landing (!) was the incredible lush vegetation. 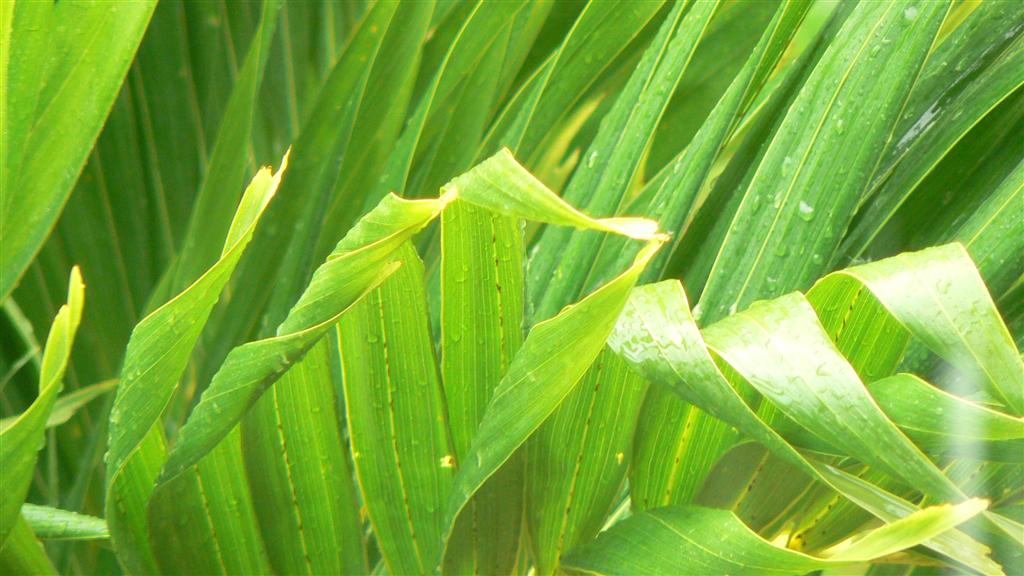 I had the chance of exploring the whole island, which is about 60 km long, so quite big. Being there with a local allowed me to meet locals, enter their houses and go out with them. One day we rented a car (we were 6 people!) and had a tour of the island. Basically all roads outside the capital (Coxen Hole) are unsurfaced and it was tough, but fun! We ended up on a beach in Punta Gorda, on the other side of the touristic area, and we were just the 6 of us. Unforgettable.

Here the water is deeper and the color is different, but the feeling is that of a savage, unexplored place. We kinda felt like Robinson Crusoe, well, as I said, kind of. I love the following image coz you can see the waves breaking on the coral reef, on the horizon line. So in the end the sea was calm anyway (please click to enlarge) 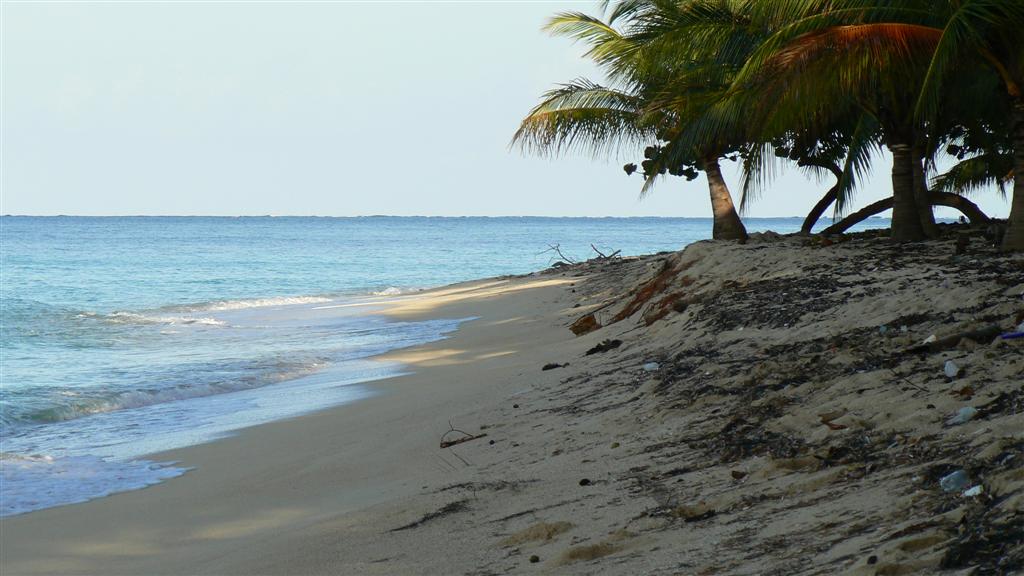 Another highlight of the day was lunch. 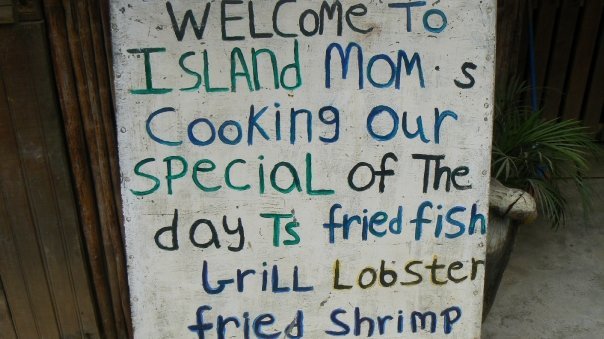 We got to a place called Palmeto Bay and chose a little family run restaurant by the sea. We were welcomed by this funny menu on the left.

In the restaurant we were the only customers and it really felt like we were sitting at a home’s table.

In fact, there was no menu, we just ordered whatever we wanted. And I mean we ordered fish, and each one of us ordered something different.

I think we waited for more than a hour. I actually thought they went out fishing to catch what we ordered, before cooking! But when you are in the “Caribbean state of mind”, it doesn’t matter whether you have to wait for an hour. Are you in a hurry? No. So what?

I think someone in other places (like NYC for instance, ahem) could kill for something like that! But would you freak out if you had to wait for 1 hour in THIS restaurant? 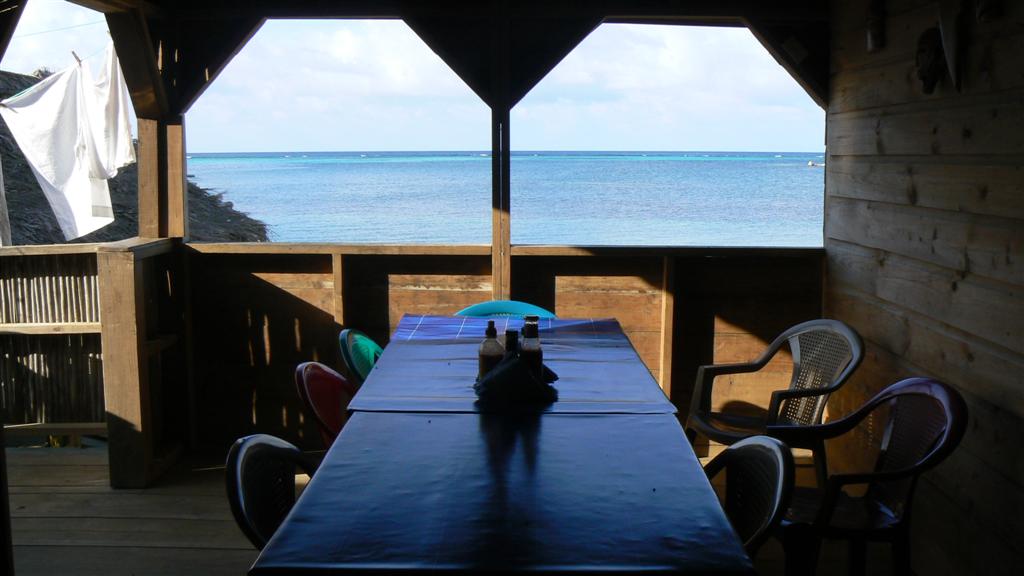 And here is the wonderful home made meal I got 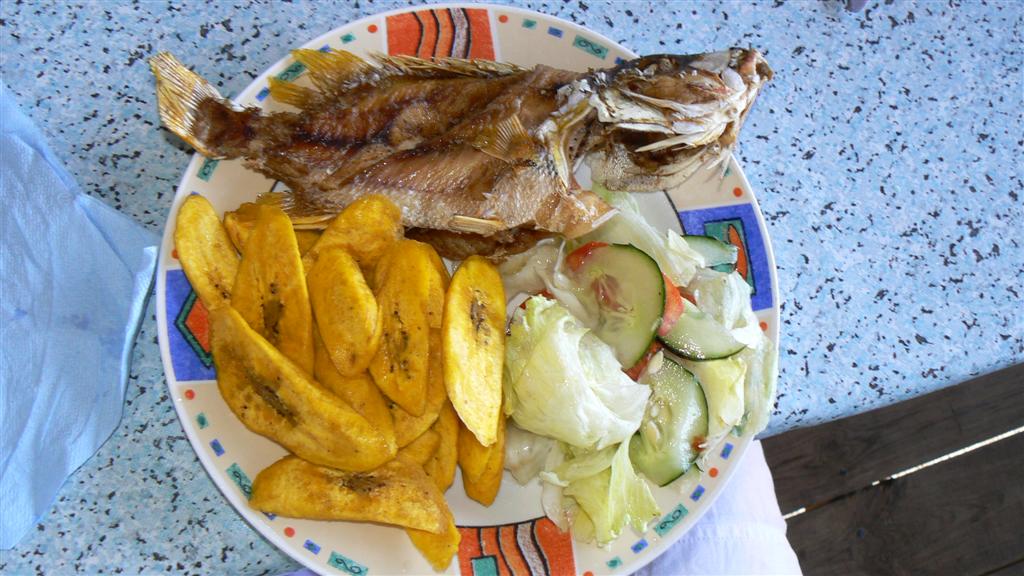 The fish was delicious and platanos,  hmmmm….

The best place for nightlife is West End, where all the (small) clubs and bars are. There are not too many so it’s not overcrowded, and it’s really fun even just for a walk.

This pic was taken on my last night there, I got my hair braided in the meantime, and a nice tan (wich is very rare). Me and this bunch of cool people were at the “Black Pearl”, a club run by 2 American guys (one is on the right, shirtless) – plz note that everything here is in the open air! 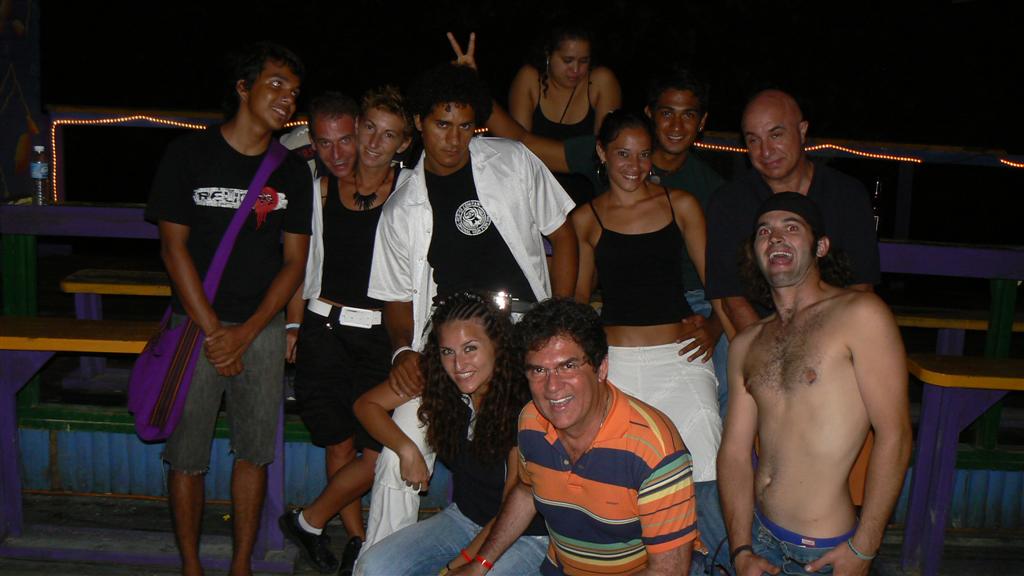 An amazing fact about Roatan is that it belongs to the second largest coral reef system in the world, second only to the Great Barrier Reef of Australia! Diving is a must here. And of course I didn’t even try (I’m scared of sharks, yes I am).

But I went snorkeling. It was the first time in my life and I’m not lying if I say I was moved to tears. 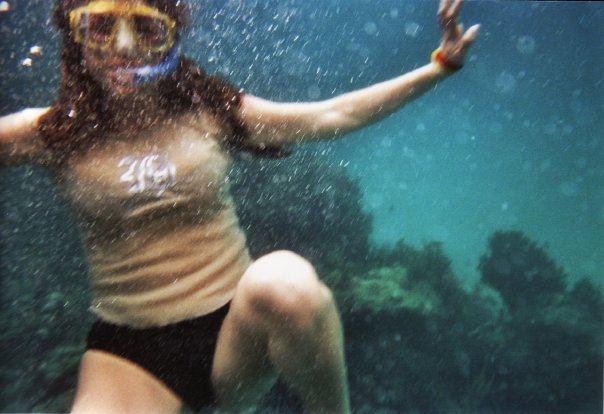 Me & the Coral Reef

The sea is great, the sun is great (even though it was november, and it was raining a lot, I still succeeded in getting sunburnt – hence the tshirt while snorkeling).

I spent a lot of time in the resort as well, I was there to relax, right? I sunbathed, went snorkeling, chilled on the beach, even experienced some of the most breathtaking sunsets of my whole life. 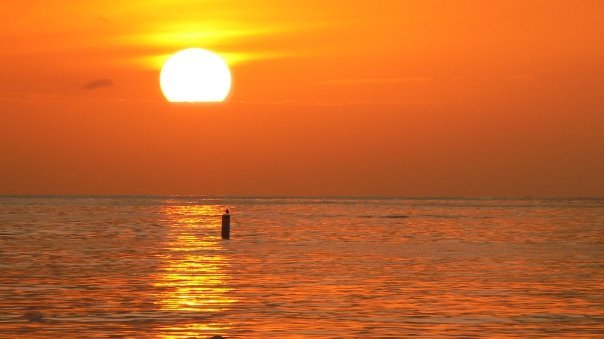 Speaking about new experiences, I couldn’t miss the dolphin encounter! I’ve been very lucky coz I got it for free (but normally it’s quite expensive, it was $90 back then!). Honestly I was a bit scared but I told you I am a chicken, right? Anyway it was an amazing experience, no doubt about that… I spent more than 1 hour with the dolphins and finally got this nice picture! Romantic, huh? What a great souvenir. 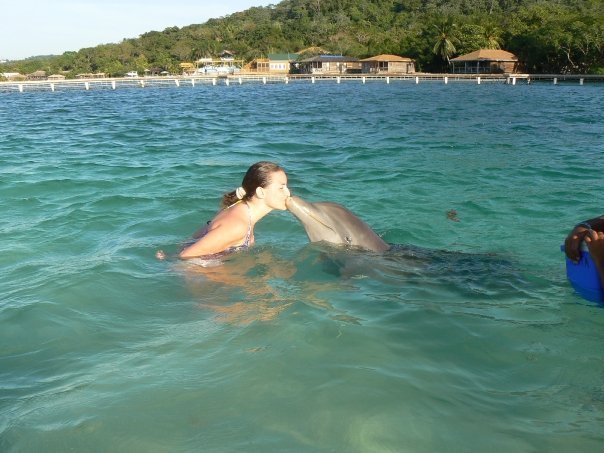 Of course I saw a dolphin before. But I never had the chance to get that close! And not only to dolphins. The island offers a wide variety of wildlife! And beware the barracuda! (tip: the barracuda is not in the lower right corner of the following gallery!)

You may think that adventure is missing on this checklist! No, I just left this chapter at the end!

I had an amazing adventure the day I went to Copan (on the mainland).

Copán is an archaeological site of the Maya civilization located in the Copán Department of western Honduras, not far from the border with Guatemala. (Wikipedia)

In order to get to Copan from Roatan, I got on a tiny plane. No I was not relaxed, even if I pretended to! I sat by the emergency exit, you never know, ha. 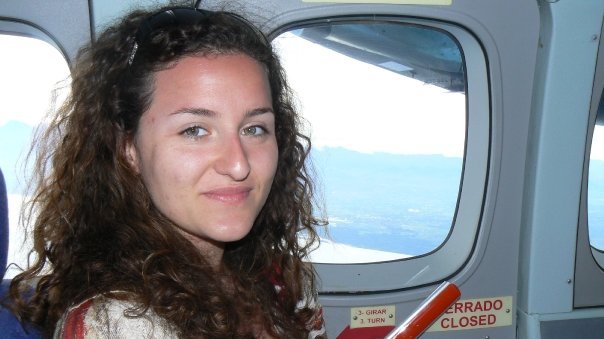 We landed in Guatemala, on a private “runway”. Here it is: 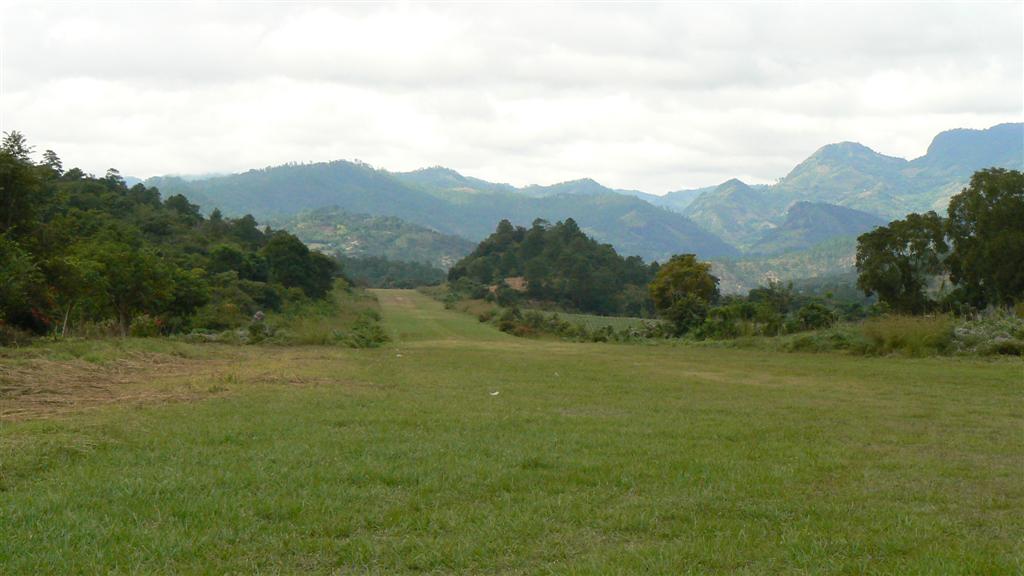 Then we were taken to the other side of the border by minibus.

Copan ruins are amazing, it’s a very large archaeological site surrounded by the wild. By that time there were not many tourists around, and the visit was really enjoyable.

The main pyramid’s stairway is covered by a tent in order to protect it from the sun.

After the visit we spent some time in the small town of Copan, which was really nice and quiet. We had lunch in a small typical restaurant and had some time to wonder around.

I LOVED the police car 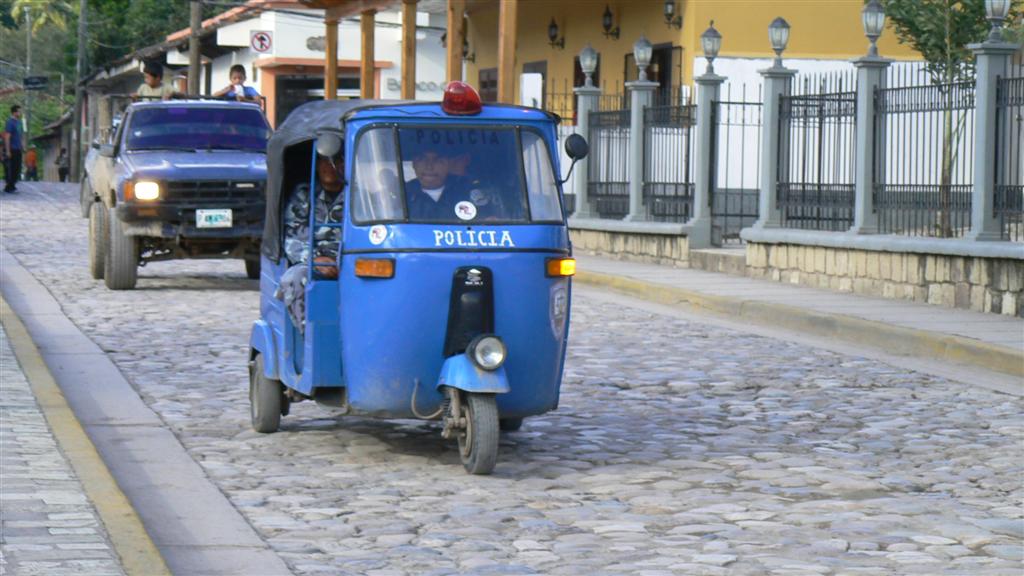 But the best part of the day still had to come!

On the way back to Guatemala, our minibus got stuck in the mudd and couldn’t move any further. 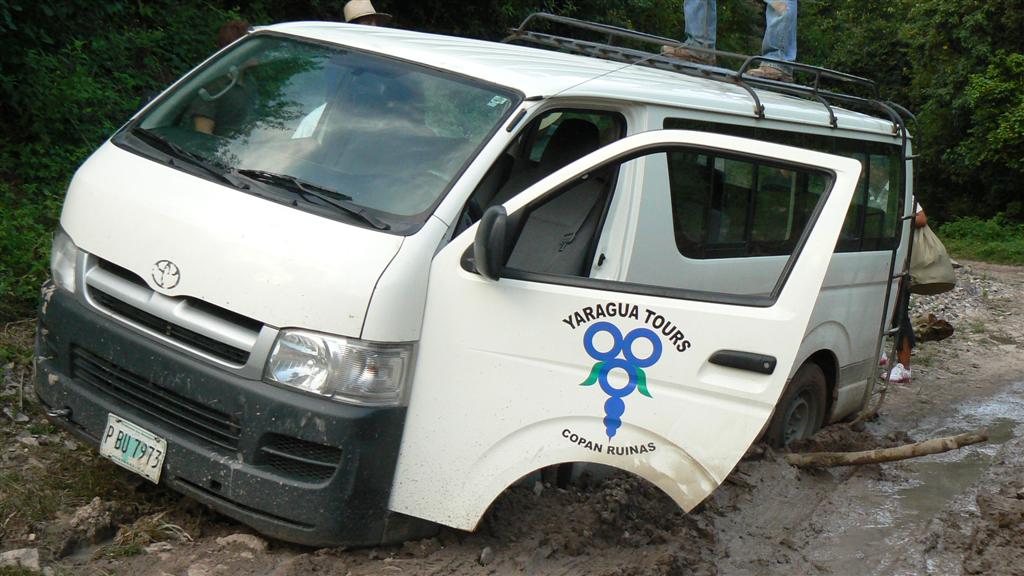 There was only one option: walking. The only problem was that time was running out, it was late, and the plane couldn’t take off in the dark.

Now, this turned out to be the best lucky break I could expect! 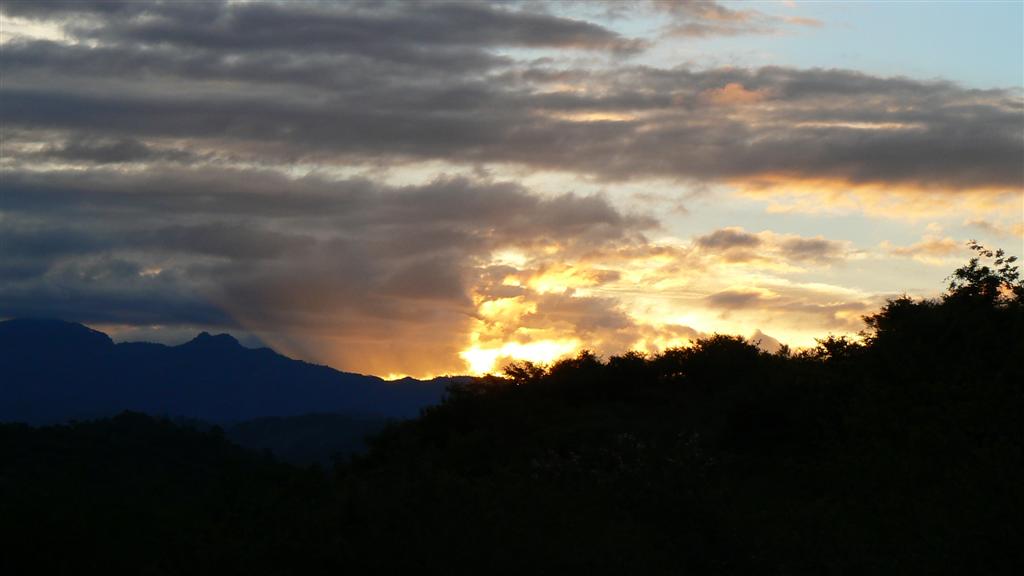 but we also crossed the border walking.

Ladies and gentlemen, here is the Honduras/Guatemala border! Impregnable… 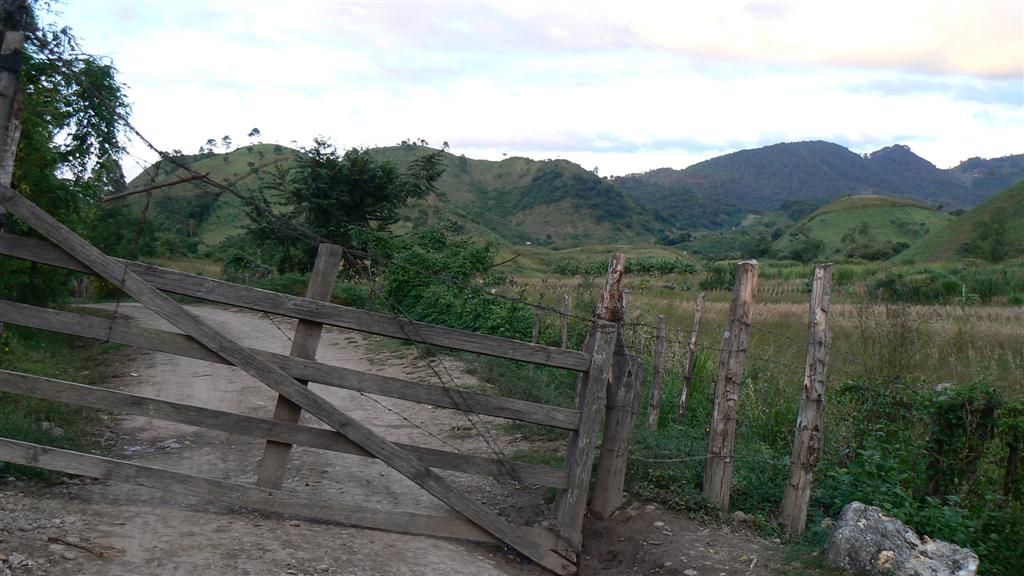 We made it on time. The sun had not competely set, and the plane was waiting for us. We made it back to Roatan! 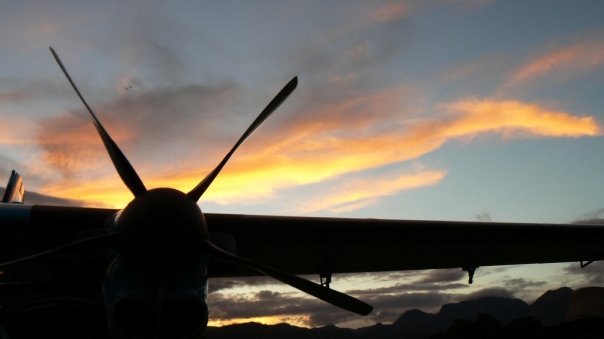 The day in Copan was amazing, but this extra emotion made it unforgettable and unique! Sometimes unforeseen events are the best part of the travel. Do you agree?

Ooops, I totally forgot to show you the sea. Ok, here is another barracuda… 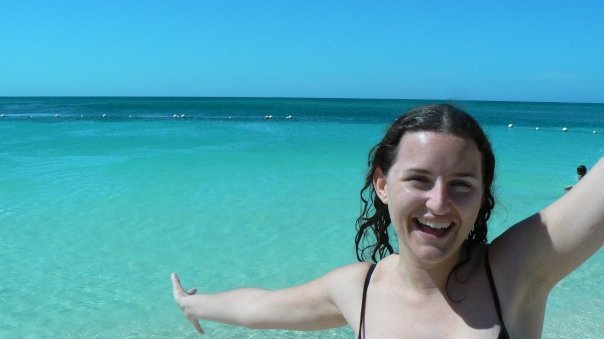 Last but not least, in Roatan I met someone very special, Dennis, and we’re going to backpack in South America together for a couple of months  next year.

Roatan looks lovely, I was just in Utila a month ago. Please please say that the dolphin was wild and not part of the hotel. I just saw The Cove and the idea of swimming with dolphins now makes me physically ill.

Actually those dolphins were in open ocean.
As the Marine Institute at Anthony Keys website says “dolphins are free to come and go as they wish in their own environment. There is no feeding to lure the mammals near the humans for interaction. Dolphins have natural curiosities and will come in close to humans.”
I googled The Cove and I’m definitely going to watch it.
I might spend a couple of months working in Utila next year!

Wow! Make out session with the wild dolphin. I’m jealous, the dolphins back at home aren’t THAT friendly. Beautiful photos, thanks for sharing these!

Haha:) well I guess those dolphins are used to humans anyways!
It was nice to look back at these old pictures and sharing them. Thank you for the comment!

Giulia! I’m spending a boooooring day in Milan! But your post brought a great Ray of Sun in my day! Thank you!!!!!!

Glad to hear that! Milan is way too grey!
Thanks:)

Looks like it was a great trip. This reminds me of when I was in Belize. Although there I went out snorkeling in hope that I would run into sharks (I did). You have great photos too, especially of you and the dolphin.

Wow, sharks… scary! Belize must be beautiful too!
Thanks for visiting:)

LOVE reading your post!! Beautiful pictures. You have such a terrific way of conveying your thoughts….I couldn’t wait to read the next passage.

How was your backpacking trip???

Hey Jeanette, Glad you enjoyed the read :)
My backpacking trip still has to start, I am in Egypt at the moment and I will go to South America at some point during 2011. Can’t wait!

Oh wow that seems crazy & like so much fun on how you got to Copan. Now that is a fun transportation day jaja~

Ive heard of Roatan so much but never made it out that far & the only thing I did in Honduras was the ruins.

I love Roatan! What a great story and photos. Thanks for sharing!

[…] I accepted a job in Honduras, on a well known touristic island called Roatan. […]

Looks like you had a really great vacation. Hope you are completely destressed. Roatan with its pristine white beaches does have a calming effect on your senses. The next time around make sure you try the dive. It is an experience by itself.

When you live in Roatan... | Travelreportage.com by Giulia Cimarosti Reply

[…] been living in Roatan for a while, almost 5 months, and even if I’ve been on the island before as a tourist, this was obviously a completely different experience. No more resort and buffet […]

Thanks for sharing useful info about our island.