he first, I following— until I saw,
through a round opening, some of those things
of beauty Heaven bears. It was from there
that we emerged, to see— once more— the stars.

Imagine complete darkness. You can’t even see where you’re leaning your feet. But little by little your eyes get used to obscurity and what you see is a black shape of a mountain in front of you, under an infinite expanse of stars – your only source of light!

And you walk towards the edge in a cold night. You get tired, but at the same time you can’t wait to get to the top. It’s cold but you start to sweat. In 2 hours you’ll be at the beginning of a 750 steps stairway – the final part of the path that takes you to the top on Jabal Moussa (Moses Mountain).

Me and 2 friends were in Cairo and decided to go to the Sinai for a weekend. Forget travel agents, just move like an Egyptian! It’s quite a long journey – around 9 hours on a bus – and it was a friday so we had the Koran broadcasted on the bus radio all the time. Funny, for the first 10 minutes!

We were staying in a lovely beduin camp in St Catherine, run by Sheikh Saleh Mousa (in the picture)

Everything was ready for the climb. We spoke with Saleh about our project and he suggested an alternative route to the mountain top, and we left around 2 am with a beduin guide called Mahmoud.

I suggest that path to everyone because

We were amazed by how Mahmoud – our guide – could walk in the dark and show us the way. He walked fast and at the beginning we were stumbling to keep up.

The ascent lasts about 3 hours. The final part (1 hour or so) is the same for everyone, so there is a point in which the two paths join. And there is where the so called “Stairway of Repentance” begins.

People start being very tired at this point but we were too excited to slow down and didn’t want to miss the sunrise, so in a final effort we got to the top and we got a first row place on the rocks! The sun was about to come up and suddenly there it was – an amazing down! 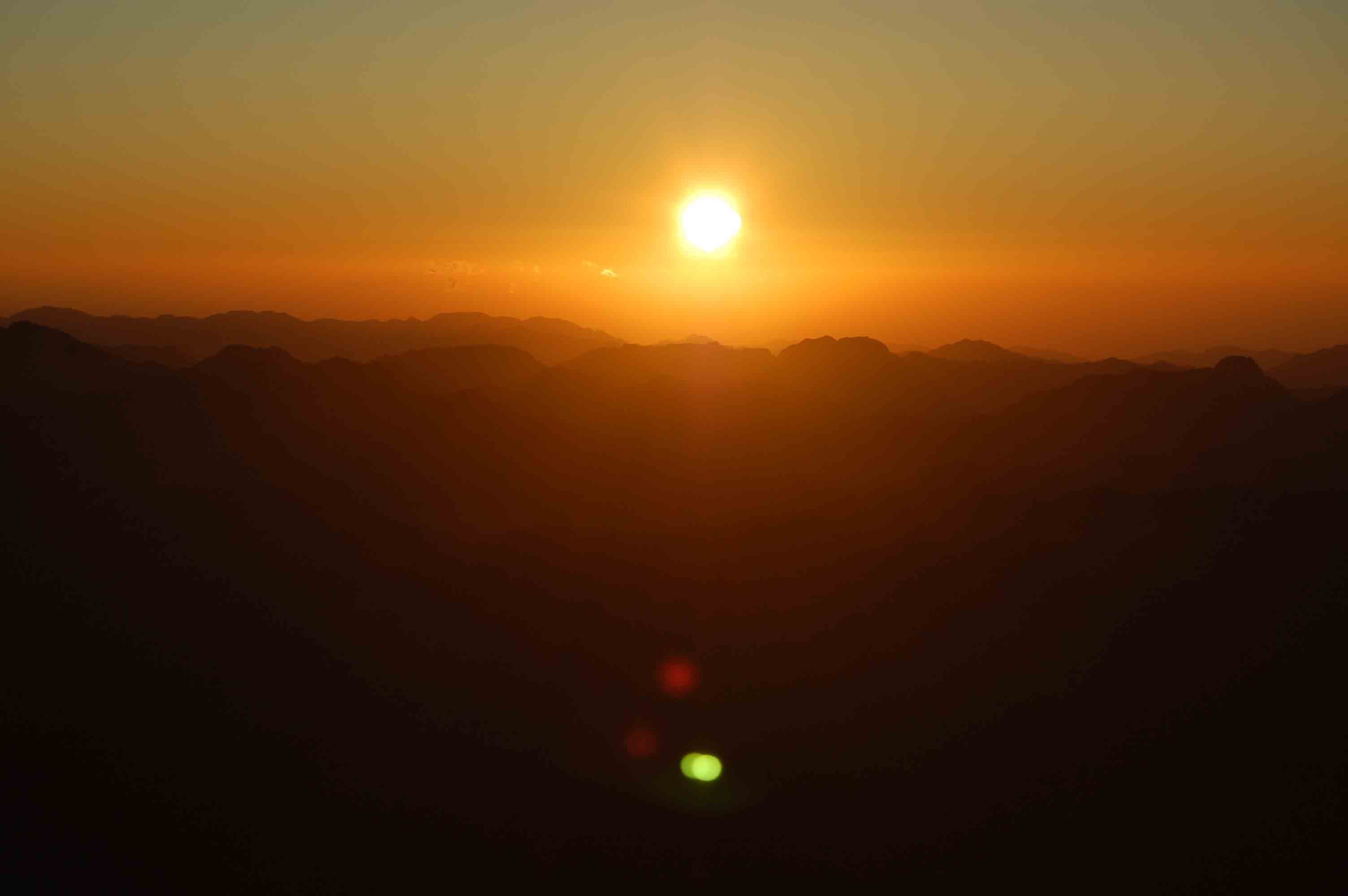 By that time the temperature was around 0°C – which is pretty cold if you think that we left Cairo with around 25°!

After that mystical moment – no matter if you’re religious or not, some moments are just mystical! – we were ready to descend, towards St Catherine Monastery. But first we spent some time on the top taking pics around. The light was amazing! 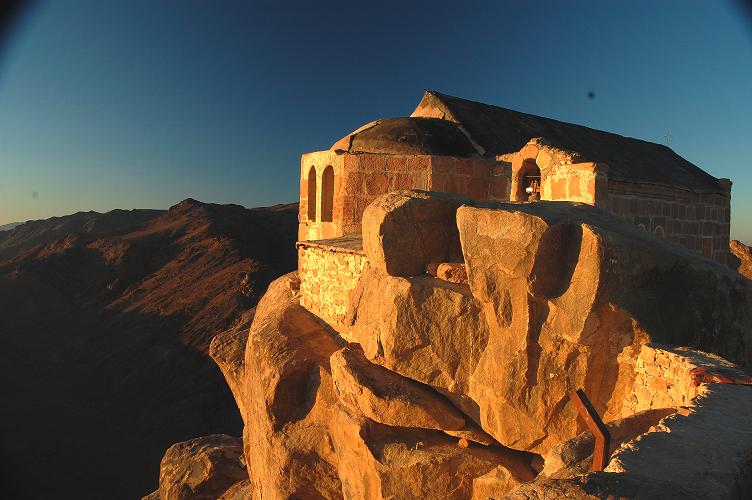 The sun was rising, we were walking on the slope back to St Catherine, and the landscape was great.  I was particularly taken by the different colors of the soil. Look at this pic I took 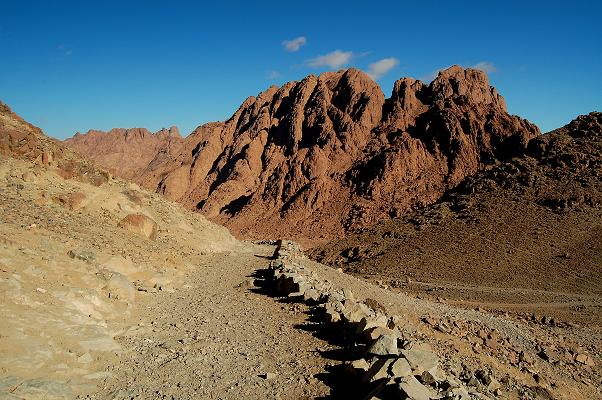 Around that corner was the Monastery

If you go there for religious purposes this place can be moving – the Burning Bush is inside the walls of the monastery and many pilgrims gather around it to touch the leaves and pray  (“In the narrative, the burning bush is the location at which Moses was appointed by God to lead the Israelites out of Egypt and into Canaan” – Wikipedia). 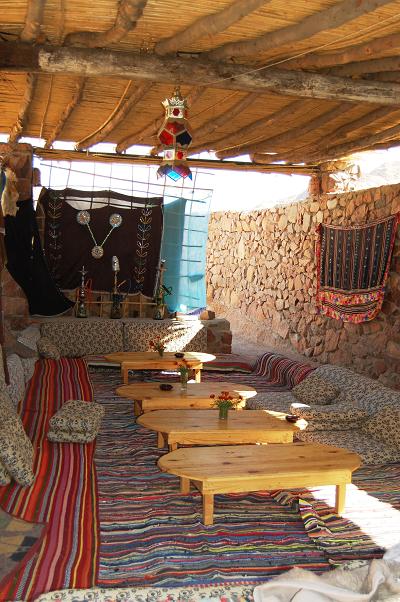 Back to the camp, we slept and relaxed until dinner time.

We spent the night in the sitting area by the fire, called “arisha”. The beduins served an excellent regenerating dinner. We played cards with them and listened to Saleh’s stories about camels, women and desert. We didn’t really care whether they were true or not, they were fun!

The following morning we left to Cairo.

If you wish to take this trip, don’t forget to bring heavy clothes – it can be very cold! St Catherine village lies at an altitude of about 1600 meters and Mount Moussa is a 2285 m-high mountain.

Try to organize the trip yourself if you’re on a budget. Believe it or not, overall we spent less than € 40 including: round trip to/from Cairo by bus, 2 nights accommodation in beduin camp, food, guide, tips, taxis.  Great, isn’t it? 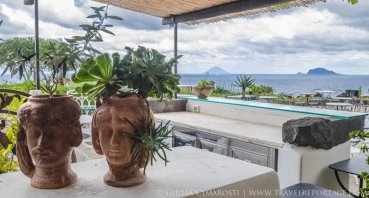 Wow – amazing photos! Mount Sinai is probably my #1 reason for coming to Egypt. Can’t wait to do it in a few weeks. Glad to see that it’s possible to do without joining a big tour.

Thank you Adam! If you need any advice to get there from Cairo, just ask!

What a great story. I’ve read about St. Catherine’s Monastery before, but I haven’t read about what the climb to it would be like. I can imagine that the scenery would be beautiful. From your photos I can tell it was a great adventure.

Climbing was actually the best part – very hard if you’re not trained, and I wasn’t! – but 100% worth it. I’ll never forget those stars!
Thanks for your comment, I appreciate that:)

Gorgeous pictures! Sounds like this was a really amazing trip, I think I’ve just added it to my never-ending list :-)

[…] Climbing Mount Sinai – My first travel related post: memories of a beautiful experience I had the year before, during a one month stay in Egypt studying Arabic. […]