I’d be happy to find out that some of you got here randomly and don’t know anything about my plans for the future.

I’m moving to Cairo, Egypt on September 1st, 2010 and this means I plan to live there at least for 8/9 months.

All of my friends know about this, coz it’s like my #1 subject all the time (booooring!) but not all of them know why I’m moving there, or maybe they just don’t understand!

So, to make things clear I’ll try to explain why I chose Cairo, and why at the moment it’s my favourite city in the world.

Once upon a time…

There was a time when ignorance was in my head too, or maybe it was just a bit of narrow-mindness due to lack of experience. Which is not acceptable anyway coz I’ve been traveling since I was a child, but ok, let’s go on.

Back then I was not really much into “Arabic Countries”, even if my father worked (and still works) in Algeria, and I visited him twice, and I also traveled to Morocco once. But!

But I was still thinking that “Arabs=terrorists” and stuff like that (poor silly Giulia). Yeah but I admit that!

It was 2004 and my mom had her 50th birthday and decided to go to Egypt for a Nile cruise and chose to go with me, and I was ZERO-excited about it. I didn’t even want to go, I never even looked at the map of Egypt in my life, I didn’t know anything about that land, and was not even interested in finding out more. How wrong I was!

Maybe the fact that I didn’t expect anything from that trip was the main reason why I was so impressed – and I’m not exaggerating saying that IT CHANGED MY LIFE.

Since the very first moment I landed in Cairo I just felt it. We were going to spend 2 days there, then get a flight to Luxor for the cruise. I remember the first time at the Egyptian museum, and what impressed me the most was this 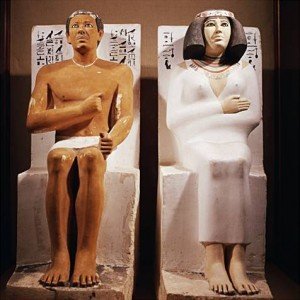 Their eyes. Our guide pointed a flashlight at them and they beamed. They are made in glass and they say that who found these statues was terrified coz they seemed ALIVE. Yeah. Loved it.

I could write a lot about Giza Pyramids but I’ll be honest, I was not that impressed the first time I saw them, blame it on the crowd, or maybe it was just “too much” to realize it was actually true to be there, staring at something that survived almost 5000 years and seemed to answer to all the tiny little creatures down there:  “so what?”

And then the cruise, the Nile… the Nile! THE river! How much Nile do we study on our history books while at primary schools? And what I never liked about history is that most of the time you can’t see anything of what you study. But when you are in Egypt… everything is there in front of you and you can feel it.

Egypt is about feelings and atmosphere. And stunning locations, and great people with great smiles, and real life.

When I got back to Italy I was not the same. I felt like I wanted to go back to that place so bad, I never felt anything like that before.

The second time I had the chance of going back was 2 years later, in 2006. A friend booked a Nile cruise with someone who 2 days before departure told he was not going anymore.

Why do you ask

And so there I was again. And that time I experienced something even different, going back to the same places of the previous time. I can’t say if this time was better or not, it was just AMAZING in a different way.

I didn’t mention Abu Simbel before, coz it took me 2 visits to actually realize how special that place is. If I have to explain usually I say that it’s so beautiful and perfect and big and everything that at first it just doesn’t seem true.

But the second time I saw it I was crying like a baby. And I fell in love with this

There are plenty of statues like this inside the main temple at Abu Simbel. They represent Ramses II. Look at his eyes and look at his smile and then just worship him.

And the main event of this trip was the visit to the Dahshur Pyramids – didn’t go there on the first trip. I was going inside Snofru’s pyramid and I don’t know why suddenly I was in tears and shaking! And the power went off and everybody was running outside. I leave the interpretation to you, coz the guide said something about it but I don’t want to seem totally mad right now. Let’s just wait for a couple more posts!

Third time in Egypt – 2008 – White Desert … I’ll talk about it in another post. Loved it by the way, and had a short time in Cairo too.

Fourth time (2009)=best time: My lovely ex employer after promising a 12-months contract, gave me a 1-month contract (welcome to Italy) and then I had a “month off” before getting another 1-month-and-something contract.

Thank you mom. Suddenly I remembered about the advice I got from a friend who used to work in Egypt for a while – she randomly spoke me about this school called ILI where international students study Arabic and/or Egyptian. See http://www.arabicegypt.com/ for info. Great school, great people, totally recommend it.

I didn’t bother too much about finding an accommodation. I booked a flight and left, and then I was in Cairo, alone, without a place to stay. Nice.

I slept in a gloomy little hotel for the first 3 nights, and its name if pronounced in Italian sounded like “corpse”, which was funny… or maybe not.

In those first days I found out how ignorant I was about the City. I had always been there on touristic tours, when they take you to hotels, museums, pyramids, that’s it. You don’t even lean a single foot on a REAL street. I was totally lost.

I was so stupid to think that everybody could understand my English and that I could use €/$ everywhere. Again, how wrong I was! And clothing. And smoking in public. So many mistakes! If I think about it now I feel sorry for myself. But at least I’m happy I learned something I didn’t know before.

To make it simple, in a month I feel like I found a new family. I met some of the greatest people I ever met, and was amazed by the fact that so MANY great people are there. And I mean both Egyptian and foreign people.

For the first time in my life I felt like I could just stop and stay there, I didn’t have the constant feeling of needing to move on and do something else. I was both happy and scared of it. But it’s such a great feeling.

But my 1-month-and-something contract was waiting and I had to go back home.

Then I decided to move to Cairo on May. I got a one-way-ticket. And then… see previous post!

Ooops. I feel like I didn’t talk about Cairo at all. I’ll do it next time then. Details to come!